Now that this season’s Fantasy Premier League season has come to an end, you may be asking how are you going to keep yourself occupied through the summer break? Well, we have the answer…

A lot of us love a little sweep-stake with friends and colleagues on the big International tournaments, so why not spice it up your summer and play fantasy football for a chance to win £200,000.

There’s £1,000,000 in cash up for grabs, just by playing fantasy football this summer with us, on FanTeam. And the best thing about it? It’s almost exactly like our beloved Fantasy Premier League season game, which we all love to spend so much time obsessing over.

If you’re an avid Fantasy Premier League player, like we are, you’ll fancy your chances too because the rules and scoring are all very similar to what we’re use to, with only a few subtle differences to FPL – but we’ll touch on these later in the article.

There are insane prizes to be won – first place wins £200,000 all to themselves, while finishing in the top 10 guarantees you a minimum of £5000 payout. FanTeam are paying out all the way down to 10,377th place, in cold, hard cash. 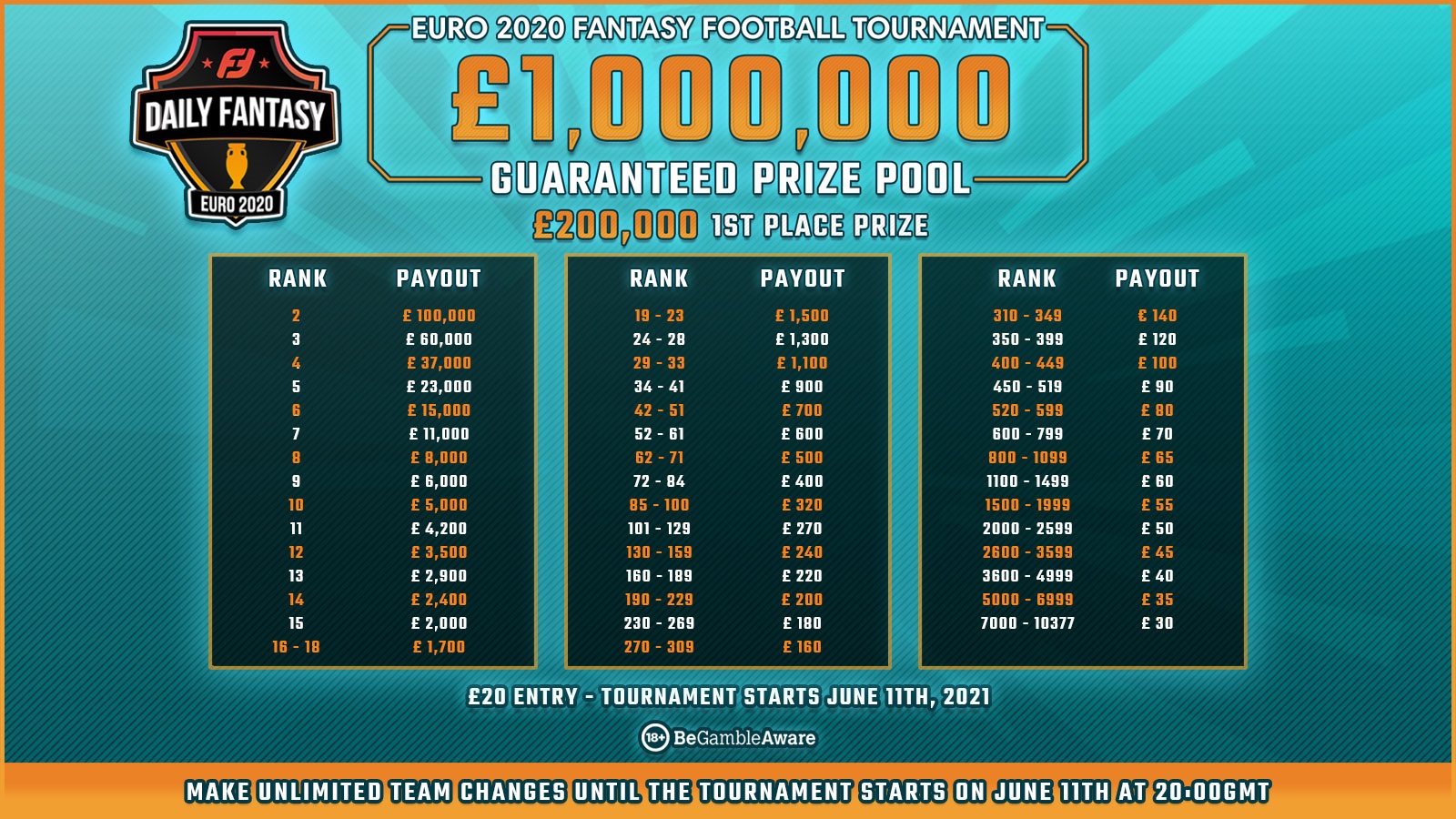 So how does it work? In this article, we will try to give you as much clear and informative information as possible – however, we’ll also include info-graphics which explain everything you need to know.

You build your squad of 15 players from the 24 countries that make up the Euro 2020 competition. Then manage them to glory! That’s the hope anyway. Let’s have a look at the key rules: 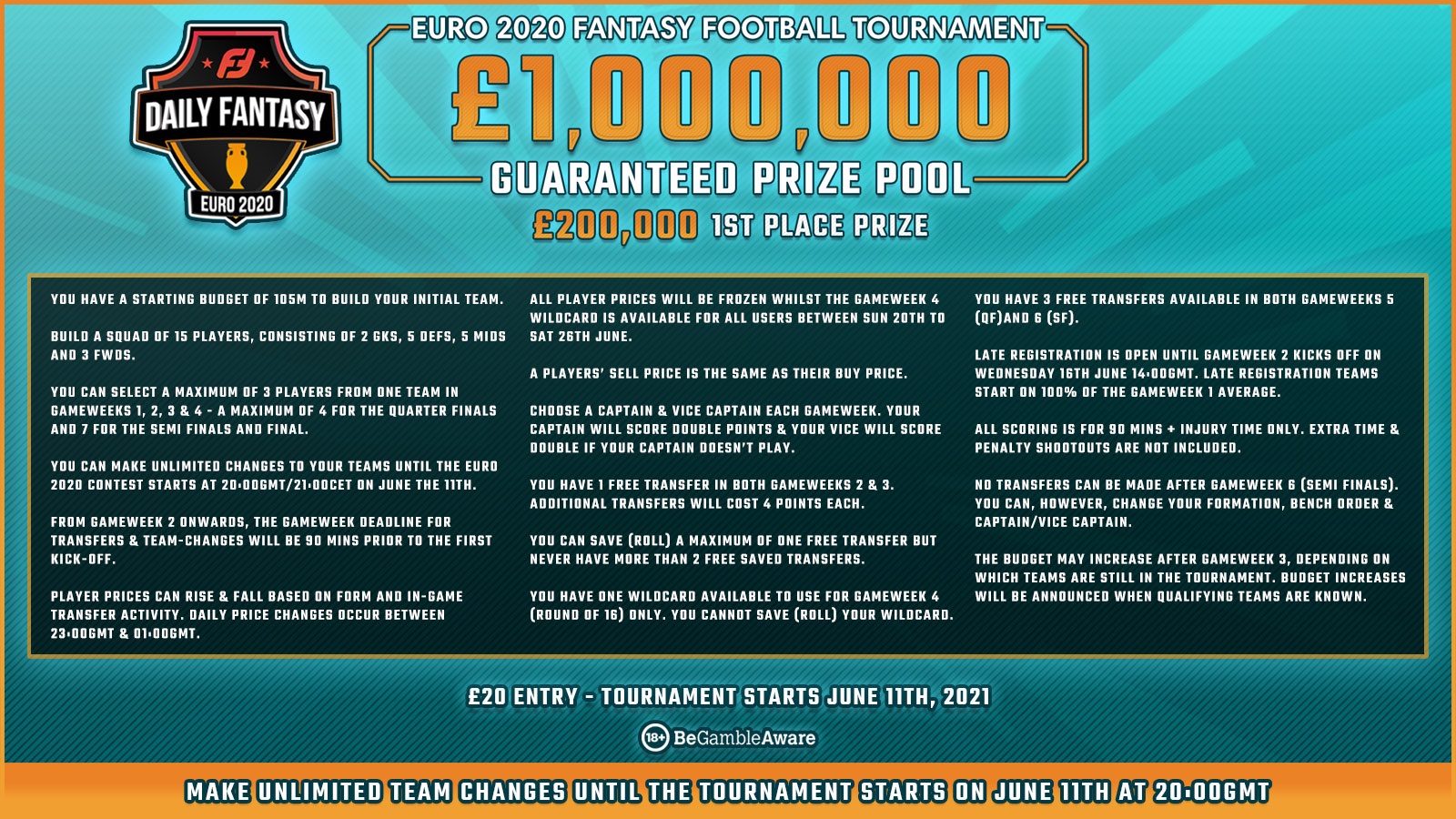 The scoring system is nice and easy to understand for anyone regardless of whether you are a regular fantasy player or not. If you haven’t played on Fanteam but are familiar with other fantasy games such as FPL then there are a few differences it’s worth paying attention to: 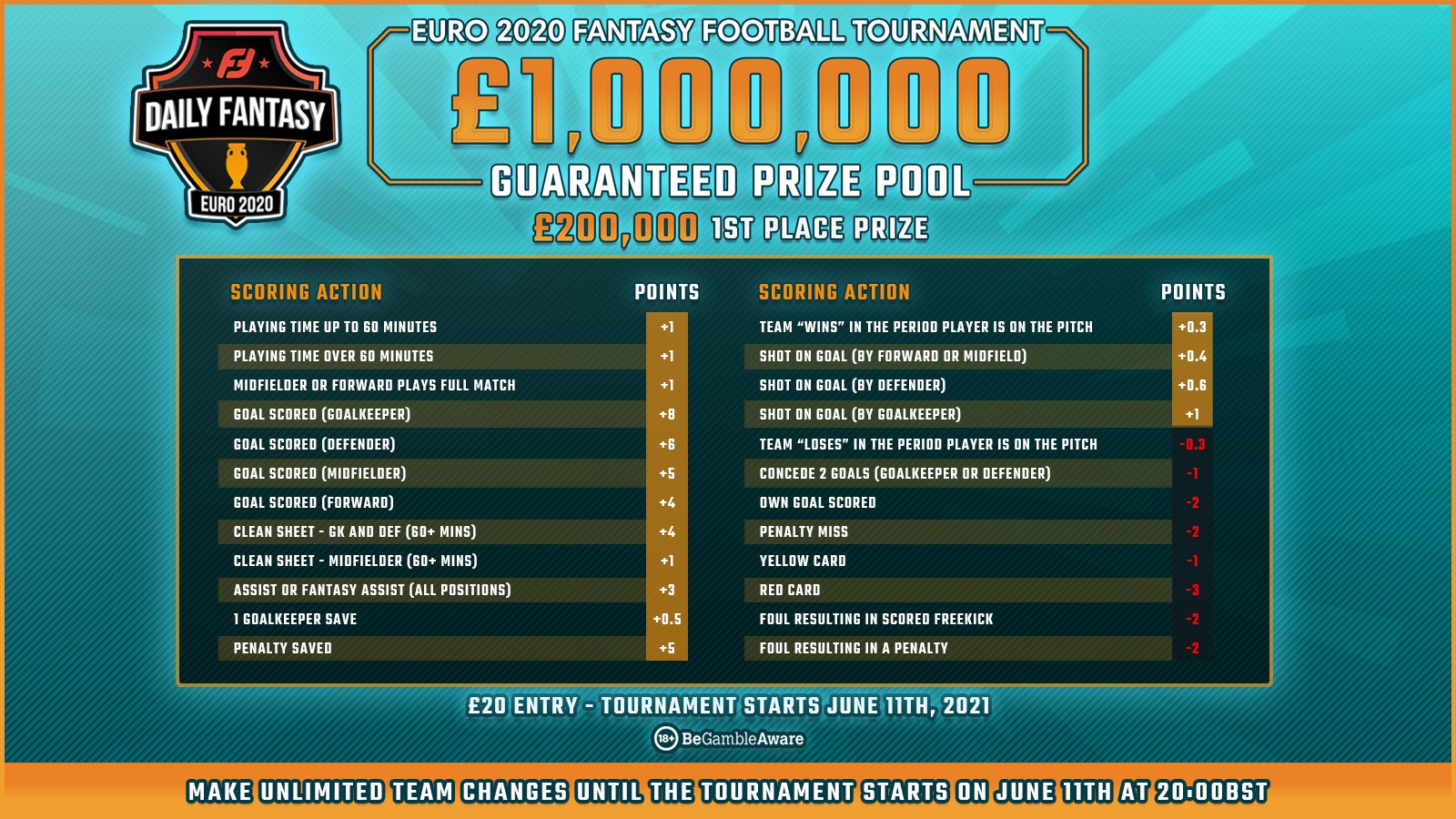 So as you can see, it’s essentially a Euro 2020 tournament in an FPL style but with a few small differences….and one big difference… You’re playing for a prize pool of one million pounds.

I’ll say that again. One. MILLION. POUNDS. Staggering. It’s guaranteed too. Regardless of how many players enter, the £1,000,000 will be paid out, no matter what.

Genuinely then, it’s just £20 – which might be the same as you would chuck in to a sweepstake with your mates or colleagues at work. But instead of playing for the £100 top prize in your sweepstake, with maybe money-back if you finish 2nd or 3rd, we’re now talking mega, mega money. Life changing money.

All for playing a fantasy game similar to FPL but in a short and sweet Euro 2020 format.

All of us here at Fantasy Football Pundits will be playing the FanTeam Euro 2020 tournament, so we’ll be running more articles over the next few weeks to help you with your Euro 2020 entries

There’s much more to FanTeam than just this competition, in fact FanTeam is the biggest site for fantasy football in Europe but all that can be for another time – for now, it’s all about Euro 2020.  So what are you waiting for? Come join us in playing for a part of that £1 million on FanTeam  [Link here] However, you MUST be 18 years of age or older to play.

As an added incentive for our loyal readers, if 250+ of our readers sign up before the Euro 2020 tournament 1 kicks off on June 11th, which we’re confident will happen, we’ll run a prize draw for everyone signing up using this link and give 5 of you your £20 entry fee BACK!

We’ll leave it there for now ladies and gents, as there’ll be plenty more to come in the coming days, but for now, register for your free account using the banner below or link here and check the game out for yourselves. You won’t be disappointed.