From winning a penalty to scoring a direct free kick or setting up a goal from a corner, set pieces offer huge potential for FPL points.

Let’s take a look at which players benefited the most from set play situations last season. 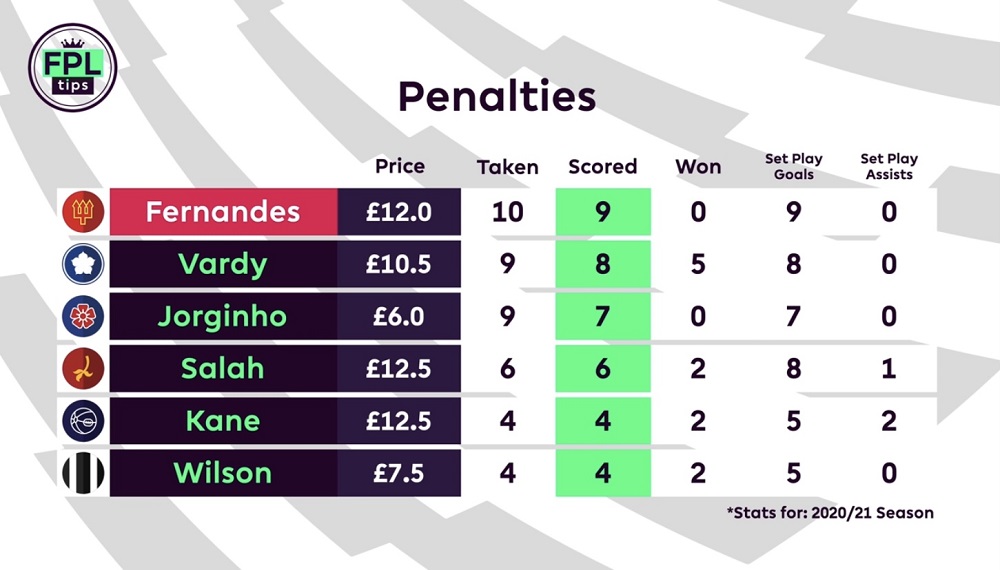 Somewhat predictably, it’s Bruno Fernandes who tops the list for penalties, with all 9 of his set play goals coming from the spot.

Manchester United have been amongst the top three teams for penalties awarded in each of the last three seasons, earning a total of 37 in that time.

Jamie Vardy and Jorginho weren’t far behind the Portuguese midfielder, each attempting just one fewer than his 10.

The fact that Mohamed Salah and Harry Kane both feature in the top five adds to their appeal as reliable captain options, alongside Fernandes.

They each converted 100% of their spot kicks last season. 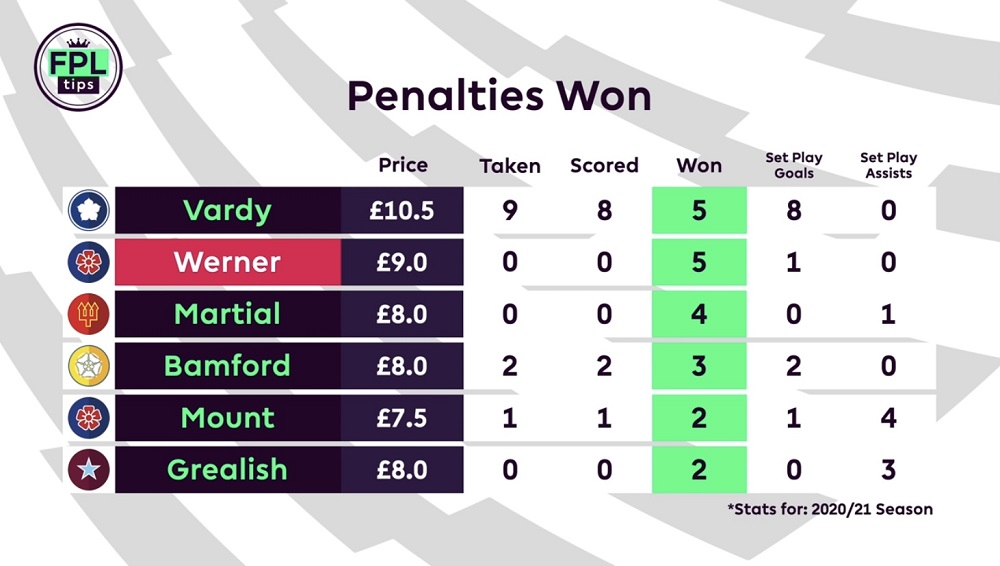 When it came to winning penalties last season, no individual was more prolific than Timo Werner.

That tally was only matched by Jamie Vardy and it’s worth noting that the Leicester forward doesn’t directly receive points for that action as he’s the one taking the penalties.

Despite making just 22 appearances, in a campaign marred by injury, Anthony Martial was responsible for earning 4 of United’s 11 spot kicks; twice as many as any teammate. 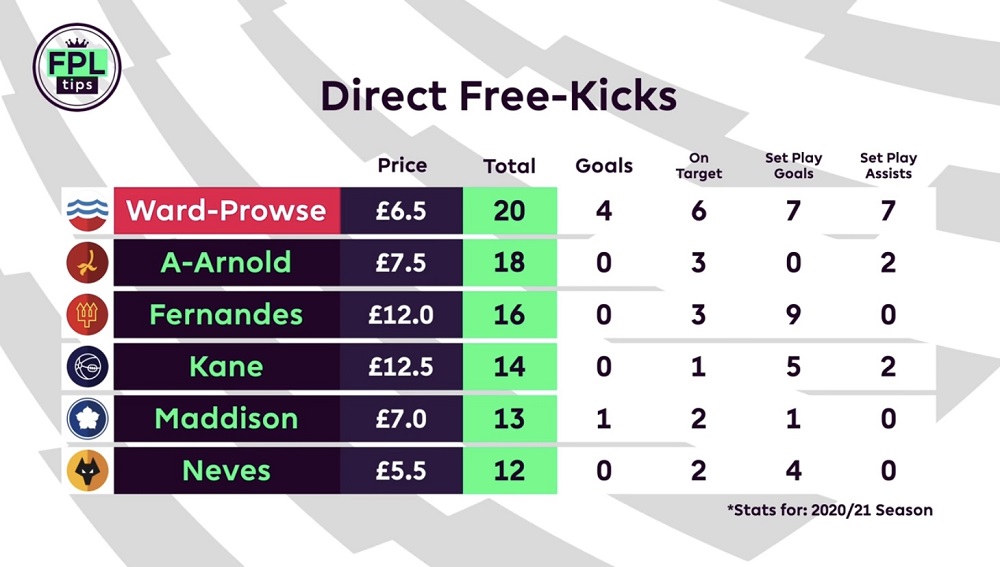 James Ward-Prowse was impressive from a variety of set plays, with no player directly involved in as many goals from them (14).

His tally of 4 goals from direct free-kicks was especially noteworthy, given that no other player managed to convert more than one.

The Saints midfielder took a league-high 20 attempts from free-kicks, with only Kevin De Bruyne matching his 6 efforts on target.

Bruno Fernandes and Alexander-Arnold were amongst the top three players for attempts but were unsuccessful in converting.

They did each score from direct free-kicks in the previous season, however. 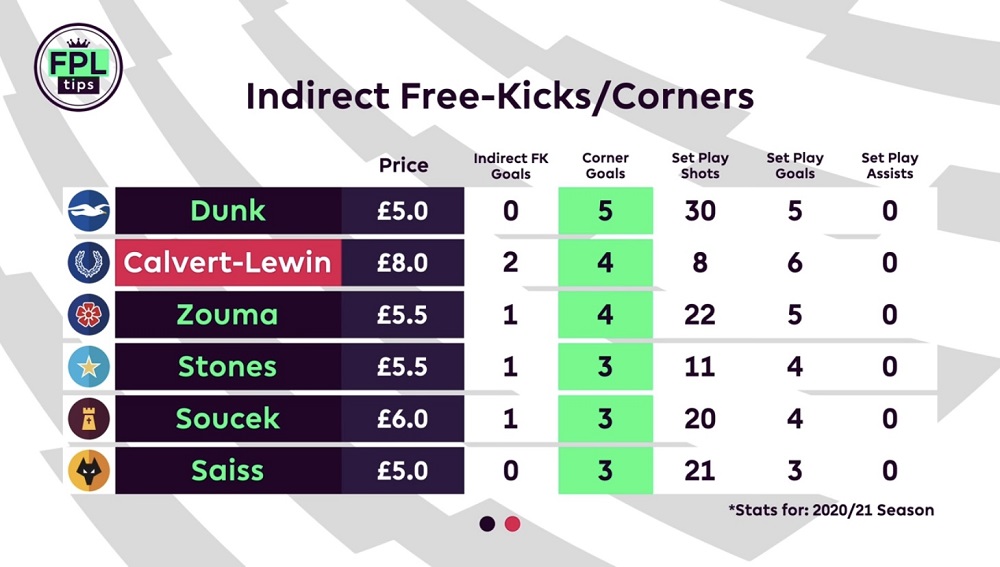 Dominic Calvert-Lewin was key from set plays last season; ranking amongst the top two players for goals both from indirect free-kicks and from corners.

The Englishman scored twice from indirect free-kicks; a tally shared by Adams, Vestergaard, Bowen and Benteke

Meanwhile, only Lewis Dunk (5) could better his 4 goals scored from corners.

Zouma, Stones and Soucek were also amongst the top five players for goals from corners. 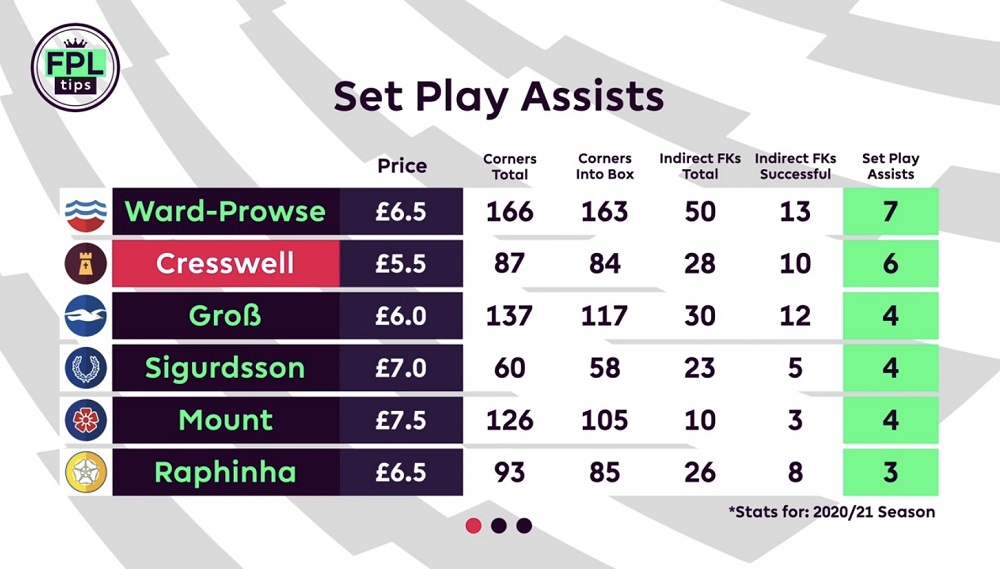 When it came to setting up goals from set plays last season, Aaron Cresswell was a player who stood out.

The West Ham defender was credited with 6 assists from dead-ball situations, with only James Ward-Prowse (7) providing more.

He ranked amongst the top six players for indirect free-kicks taken (28), across all positions.

Raphinha is another player worth noting amongst this group.

Despite not making his first start until Gameweek 9, just five players could better his tally of 3 assists from set plays.

The Brazilian ranked amongst the top four players for corners taken into the box, from that Gameweek onwards.

Thank you for reading ‘Fantasy Premier League – Set Piece Takers and Tips’ which was written and produced by FFPundits & FPLTips.