Fantasy Premier League tips: Who should I captain in DOUBLE Gameweek 25?

A double gameweek for Leeds United means only one thing… your Fantasy Premier League captain will be Patrick Bamford, right?

If you’d like to cast your vote in the Double Gameweek 25 Captains Poll, the link can be found towards the end of this article.

Here’s how things are shaping up for Double Gameweek 25 as things stand: 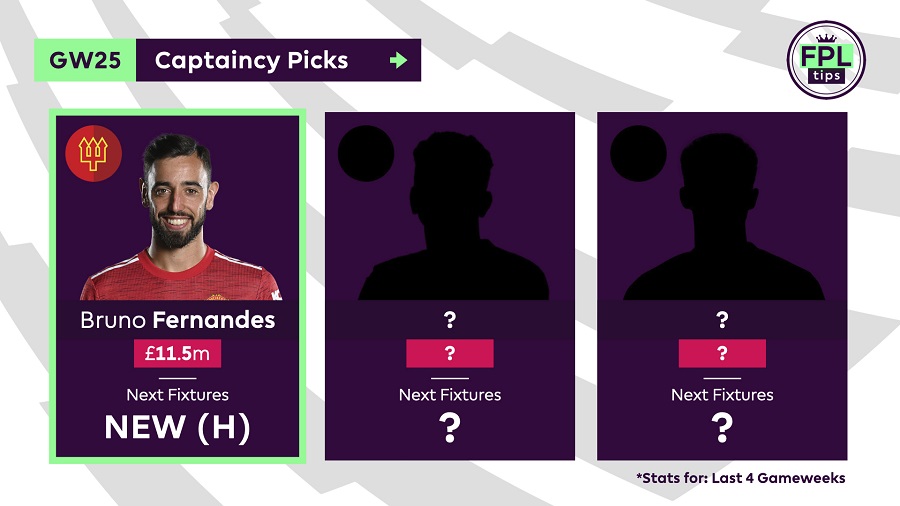 With 15% of the vote, Bruno Fernandes sees off competition from Danny Ings to secure a place in the top three.

The Portuguese midfielder has racked up 3 goals and 2 assists in the last 4 Gameweeks, to average 9.0 points per game.

Meanwhile, only Salah has taken more shots (16 to 15) and he ranks joint-top with Salah, Lingard and Bamford for efforts on target – with 7.

No player has created more big chances than his 3.

Newcastle have shipped 7 goals in their last 4 away matches; only West Brom (8), Leeds (9) and Southampton (14) have fared worse.

Only the Saints (13) have allowed opponents more big chances than their 12. 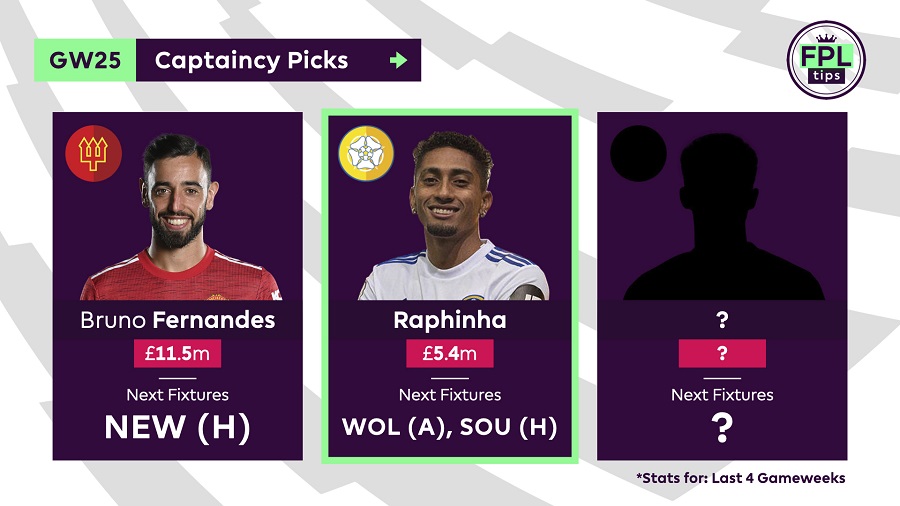 Raphinha claims second place, receiving 16% of the vote ahead of his Double Gameweek.

Since making his first start in Gameweek 9, no teammate has earned more points than his 77; an average of 5.1 per game.

The Brazilian has produced an attacking return in each of the last 5 Gameweeks, where only Gündogan has earned more points (57 to 38) and only Watkins has landed more shots on target (10 to 7).

Leeds have netted 10 goals during that time-frame; only Man Utd (14) and Man City (18) have scored more.

They rank joint-6th with a total of 10 big chances and joint-5th for shots in the box.

Marcelo Bielsa’s side have scored 21 goals in 10 matches against teams that currently sit in the bottom half of the table. 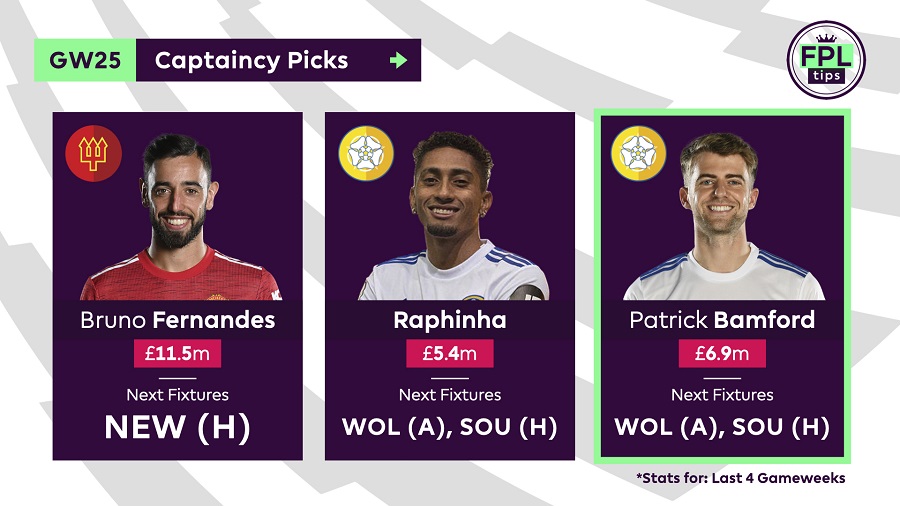 Out in front with 61% of the vote, it’s Patrick Bamford who leads the pack.

With 2 goals and 3 assists in the last 4 Gameweeks, only Jesus has earned more points, amongst FPL forwards (29 to 28).

The 27-year-old has taken 12 shots in the box in that time to rank joint-top with Salah, while only Fernandes, Lingard and Salah can equal his 7 efforts on target.

He’s been directly involved in 10 goals in 10 matches (6 goals, 4 assists) against teams in the bottom half of the table, to average 6.2 points per game.

Leeds face a Wolves side that have kept just 2 clean sheets in the last 23 Premier League games they’ve played without Willy Boly.

Their second fixture of the Double Gameweek comes against an out-of-form Southampton defence that have shipped a league-high 15 goals in the last 4 Gameweeks.

Who will be YOUR Double Gameweek 2️⃣5️⃣ FPL captain?

BEFORE YOU GO… Our official Daily Fantasy Sports Partner, FanTeam, are offering all NEW customers FREE ENTRY to this week’s Gameweek 25 Fantasy Premier League contest, which has a £11,000+ guaranteed prize pool.

Simply register for your free account here, or by clicking the banner below and once you’ve signed up, you’ll automatically receive a FREE ENTRY to this weekend’s Gameweek 25 Weekly Monster, which has a guaranteed prize pool of £11,000+ – with around £1,500 going to the first place winner!

Using your 105M budget – just like FPL, pick your best 11-man squad (no subs) for Gameweek 25 only. The contest kicks off at 15:00PM GMT on Saturday the 20th of February and covers 8 Gameweek 25 matches only.