Tottenham’s Harry Kane features in our Top 3 Captain Picks and Tips for Gameweek 5, but is he the no.1 selection?

If you’d like to cast your vote in the Gameweek 5 poll, the link can be found towards the end of this article.

Here’s how things are shaping up for Gameweek 5, as things stand: 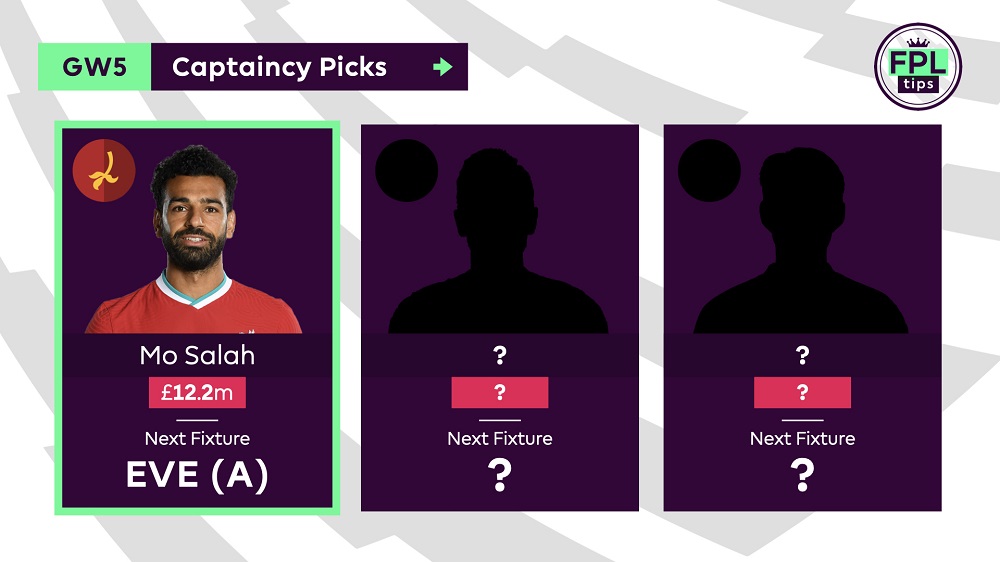 With 21% of the vote, Mo Salah moves down to third place in this week’s poll ahead of the Merseyside derby.

The Egyptian scored both Liverpool goals in the unbelievable 7-2 defeat at Aston Villa to take his FPL points total up to 41 for the season; only Kane (44) and Son (45) have earned more.

He’s taken a league-best tally of 15 shots in the box, while no midfielder has landed more than his 7 efforts on target.

But the 28-year-old averaged just 3.6 points per game in away matches against teams that finished in the top 12 last season.

Liverpool have scored 11 goals over the opening 4 Gameweeks; behind Spurs, Leicester and Everton (each 12).

The Toffees have won each of their opening 4 matches, conceding just 5 goals; only West Ham (4) and Aston Villa (2) have shipped fewer.

No side have allowed fewer big chances than their 4. 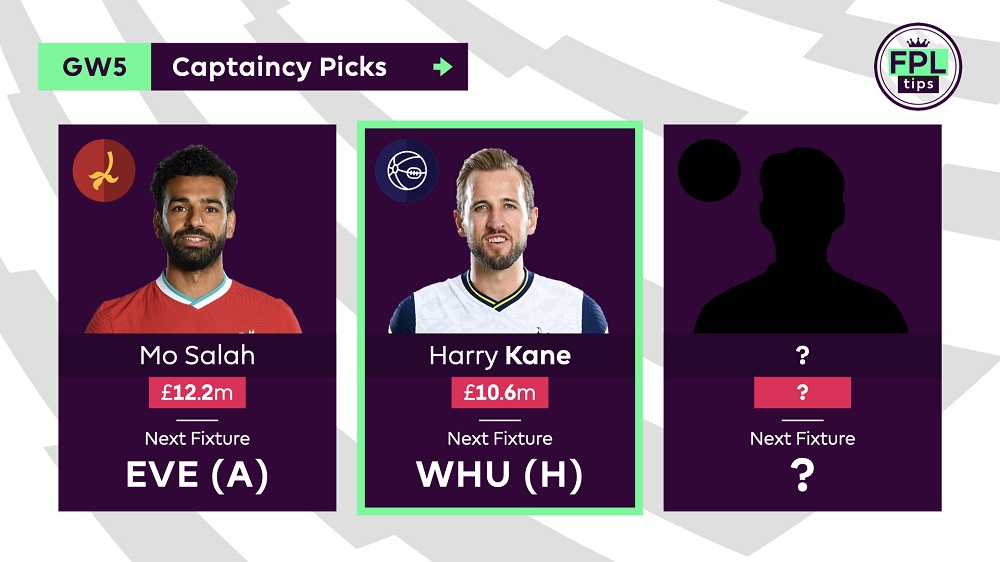 Harry Kane picks up second place, with 29% of the vote as it stands.

The England captain has 9 goal involvements already this season (3 goals, 6 assists), after earning 2 goals and an assist in the impressive 6-1 win at Old Trafford before the international break.

He’s amassed a league-leading tally of 6 assists and no player has created as many as his 6 big chances.

Last season, he averaged 5.2 points per game on home turf and this increased to 5.9 against teams that finished outside of the top 8.

Spurs have scored 12 goals this season; joint-best in the league, along with Leicester and Everton.

No side have fashioned as many as their 17 big chances; three more than Liverpool have had. 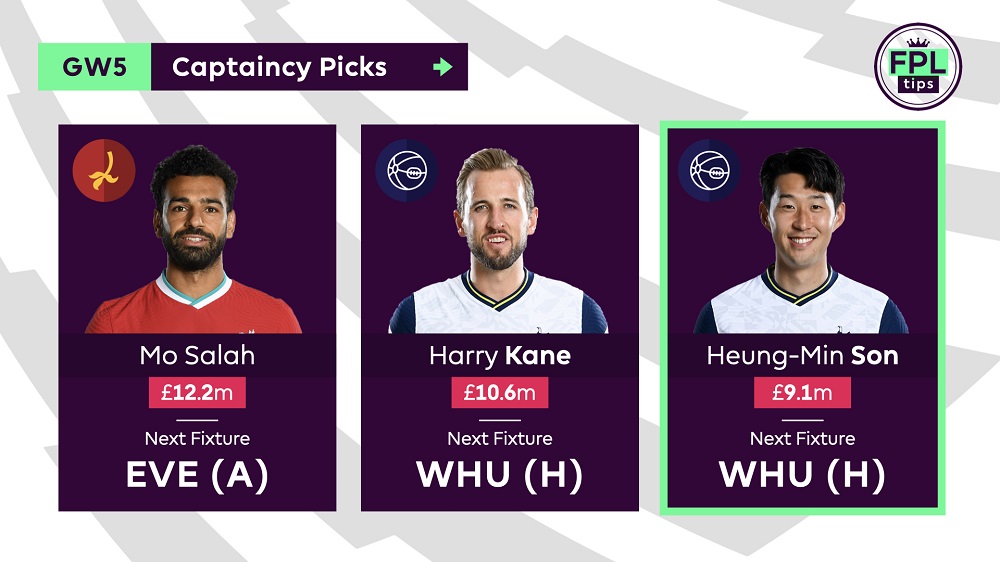 Out in front with 40% of the vote, Heung-Min Son leads the Gameweek 5 poll ahead of Sunday’s London derby.

The South Korean has earned a league-high 45 FPL points this season; averaging 11.3 per game.

No FPL midfielder has taken more than his 7 shots on target, while only De Bruyne and Salah (each 14) can better his 13 attempted assists.

The 28-year-old averaged 6.3 points per game during home matches last season and this increased to 7.0 against the bottom 12 teams.

West Ham have kept back-to-back clean sheets against Wolves and Leicester, conceding just 4 big chances this season; the joint-fewest tally, along with Everton.

However, no side allowed opponents as many as their 53 big chances in away matches last season; an average of 2.8 per game.

Who will be YOUR Gameweek 5️⃣ captain?

BEFORE YOU GO… There’s a massive €100,000 in guaranteed prize money to be won in FanTeam’s Gameweek 5 fantasy contest this weekend.

Like when playing a Free Hit, you need to pick what you think will be a high-scoring 11-man lineup for the Gameweek 5 fixtures only, but uunlike FPL, you’re doing it for your share of 100K, in cash!

If you’re new to FanTeam and have yet to create your free account, click the prize-pool banner below to check it out and hopefully get involved before the Gameweek 5 deadline.

Oh, and anyone that signs up to FanTeam via this link or by the clicking the banner below, will automatically receive a FREE ENTRY to their €10,000 game! 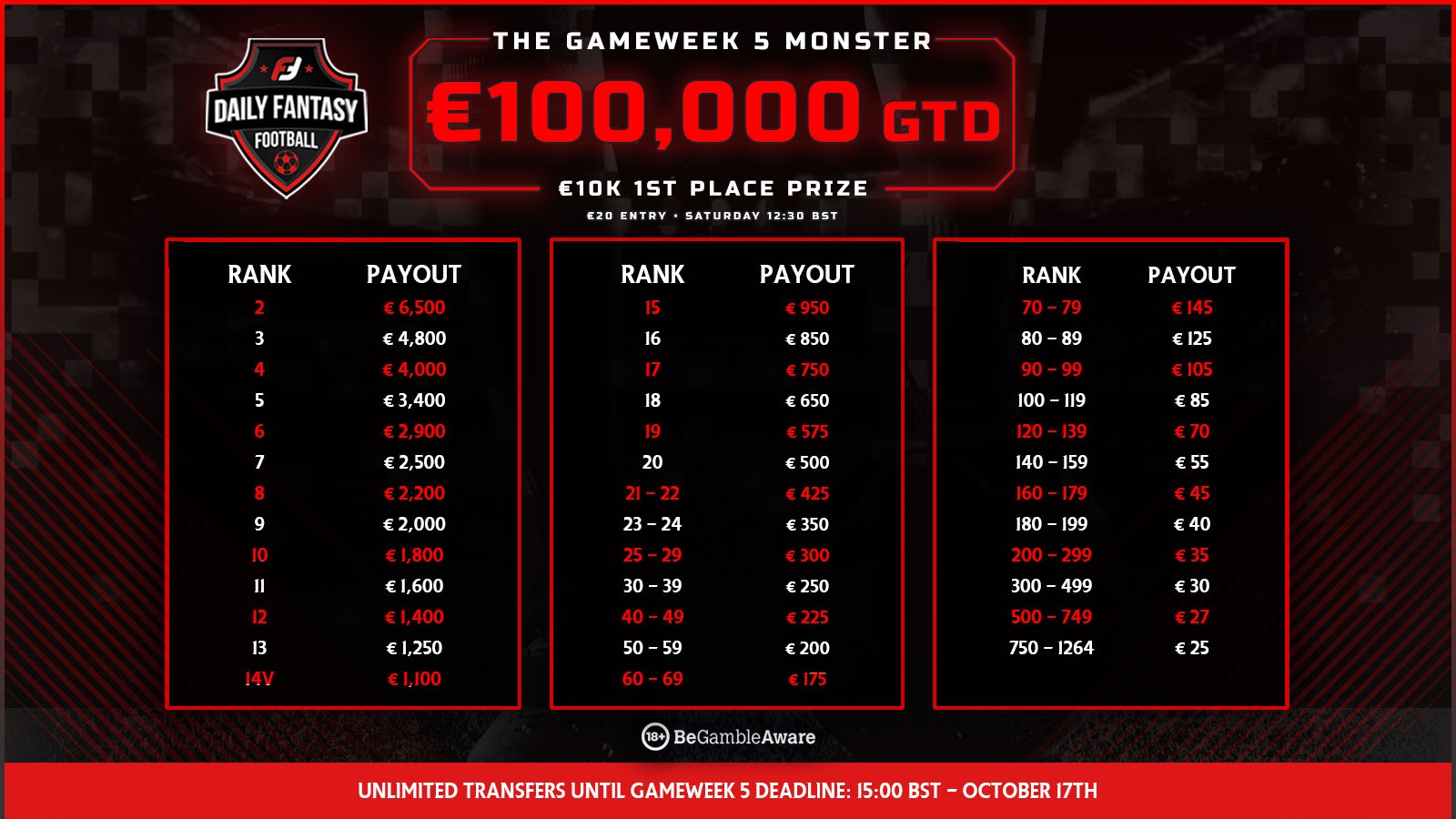 Thank you for reading Fantasy Premier League Tips – ‘FPL Tips: FPL Captain Picks and Tips – Gameweek 5’ which was written and published by FPLTips and FFPundits