It’s time for one of the more challenging captaincy decisions of the season, as we look ahead to Friday’s Gameweek 31 deadline.

Our go-to options in Harry Kane and Bruno Fernandes face each other, in a game that appears fairly hard to predict. So, will there be a place for either in the top three? 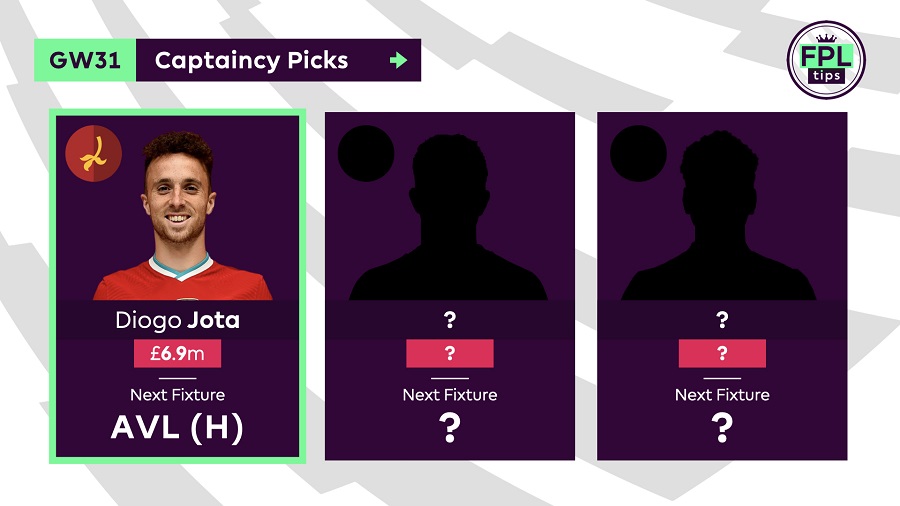 With 19% of the vote, Diogo Jota beats Harry Kane to third place, which indicates this could be a good week to go differential with the armband.

The Portuguese midfielder has been in undeniable form since making a return from injury, scoring 3 of his team’s 4 goals in the last 4 Gameweeks.

Meanwhile, his tally of 5 shots on target ranks joint-2nd amongst all midfielders; only behind Bruno Fernandes – with 6.

Liverpool have scored just 6 goals in the last 5 Gameweeks but only Spurs (16) and Man City (19) have fashioned more than their 14 big chances.

Their opponents Aston Villa have won only one of their last 5 matches, conceding 5 goals and keeping just one clean sheet. 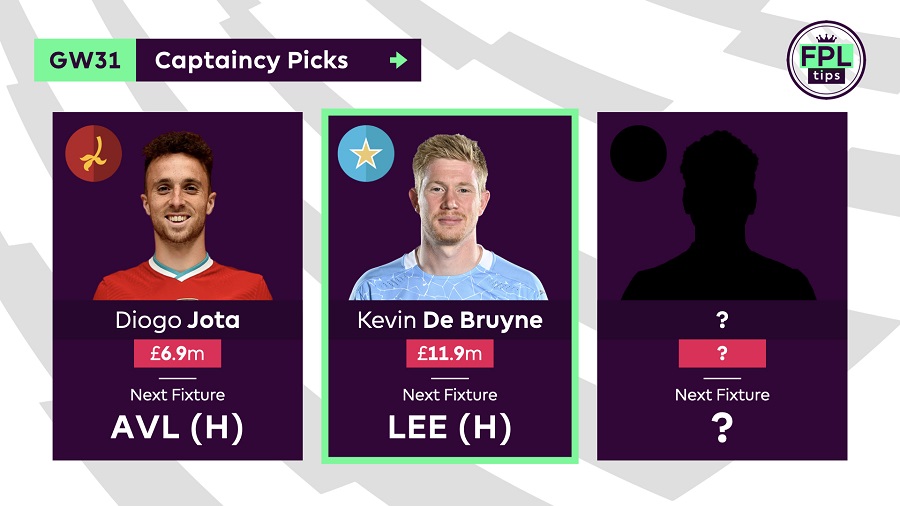 Kevin De Bruyne just misses out on the top spot, receiving a substantial 32% of the vote.

We’ve seen the Belgian get back to his very best in the past month for club and country.

No Premier League player has provided as many as his 12 attempted assists in the last 4 Gameweeks, where he’s averaged 6.3 points per game.

But will he survive Pep rotation on Saturday, with an important Champions League second-leg tie against Dortmund to follow?

Ahead of their second-leg, Round of 16 tie in March, we saw Guardiola use a 3-4-3 formation in a 3-0 win over Fulham, resting both Gündogan and De Bruyne; could we see something similar against Leeds?

Raheem Sterling has only made one start in their last six matches in all competitions but could benefit from possible rotation here, making him a tempting one-week punt.

Leeds have failed to keep a clean sheet in any of their 7 away matches this calendar year, conceding 13 goals.

Only Newcastle (14), Sheffield Utd (15) and Southampton (23) have shipped more on the road, since the turn of year. 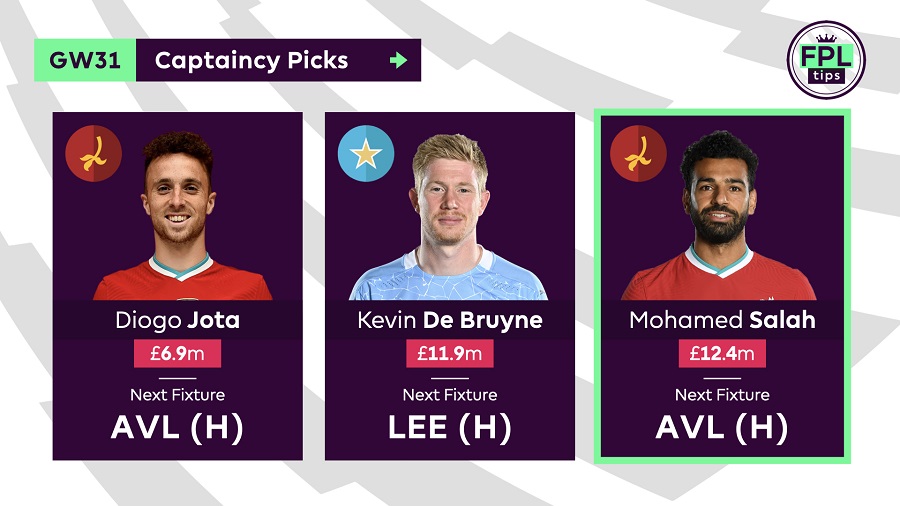 Just edging in front with 37% of the vote, Mohamed Salah takes first place.

The Egyptian king was back amongst the goals in a dominant 3-0 win over Arsenal last Gameweek, before adding to his tally against Real Madrid midweek.

Over the last 5 Gameweeks, he ranks joint-top amongst midfielders for big chances – with 4, while only Mahrez (11) has fired more than his 10 shots in the box.

Against the eight mid-table teams, sitting between 7th and 14th place, the 28-year-old has averaged 9.0 points per game this season, with 10 goals and 3 assists in 10 matches.

Only Bruno Fernandes has earned more points against those sides (97 to 90).

Liverpool have netted 24 goals in their 10 matches against mid-table sides, averaging 2.4 per game – which is an improvement on their overall season average of 1.7 goals per game.

But Aston Villa have conceded just 11 goals in 9 matches against the ‘big six’ plus Leicester this season; an average of 1.2 per game.

Who will be YOUR Gameweek 3️⃣1️⃣ FPL captain?

BEFORE YOU GO… Our official Daily Fantasy Sports Partner, FanTeam, are offering all NEW customers a FREE ENTRY to this week’s Gameweek 31 Fantasy Premier League contest, which has a £11,000+ guaranteed prize pool.

Simply register for your free account here, or by clicking the banner below and once you’ve signed up, you’ll automatically receive a FREE ENTRY to this weekend’s Gameweek 31 Weekly Monster, which has a guaranteed prize pool of £11,000+ – with around £1,500 going to the first place winner!

Using your 100M budget – just like FPL, pick your best 11-man squad (no subs) for Gameweek 31 only – imagine you are playing your Free Hit chip. The contest kicks off at 15:00PM GMT on Saturday the 10th of April and covers 9 Gameweek 31 matches only.