With only 8 games taking place in Blank Gameweek 33, which premium captaincy options are still at our disposal this weekend?

If you’d like to cast your vote in the Gameweek 33 Captains Poll, the link can be found towards the end of this article.

Here’s how things are shaping up for Gameweek 33 as things stand:

Please note that all player prices, ownership and captaincy percentages were correct at the time of recording. 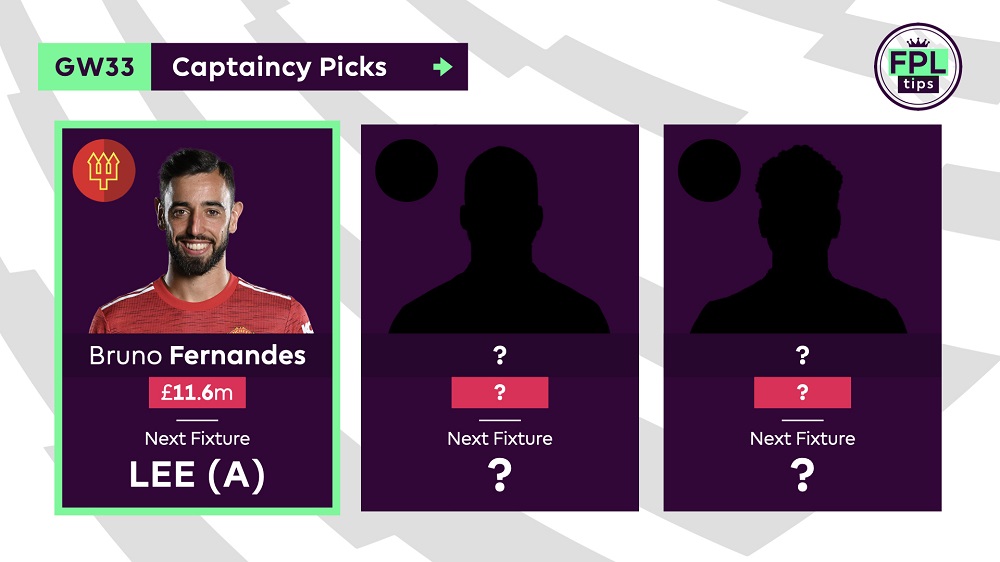 With 21% of the vote, Bruno Fernandes sees off competition from Jesse Lingard to secure a place in the top three.

The 26-year-old has been directly involved in just 2 goals in the last 6 Gameweeks (1 goal, 1 assist), averaging 4.4 points per game.

But only De Bruyne (12) and McNeil (13) can better his 11 attempted assists amongst midfielders in that time, while only Lingard and Havertz can equal his 9 efforts on target.

Against mid-table teams, sitting between 7th and 14th place, Fernandes has directly contributed to 14 goals in 12 matches this season (8 goals, 6 assists); averaging 8.1 points per game.

Leeds have improved defensively over their last 6 matches, where only four teams have shipped fewer goals than their 6 but they’ve kept just a single clean sheet in that time.

Man Utd rank joint-third with 11 goals scored in the same period, while no side has fashioned more than their 18 big chances. 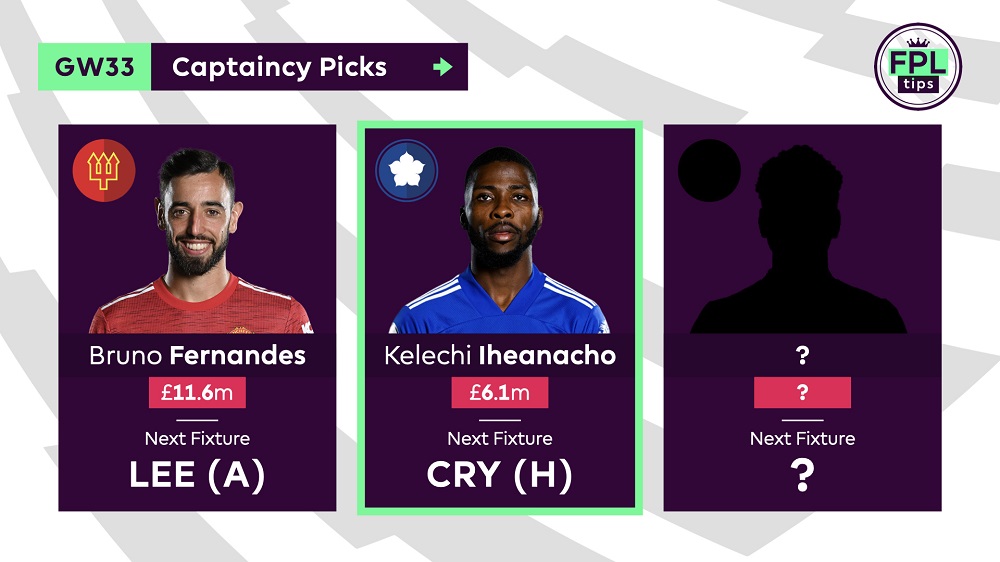 The Nigerian has been the league’s second-most in-form forward across the last 6 Gameweeks; trailing only Kane for FPL points in that time (55 to 41).

Between Gameweeks 26 and 31, the 24-year-old has netted a league-best 7 goals to earn an average of 8.7 points per game.

Leicester have scored 11 goals in their last 6 matches; on par with Man Utd and behind only West Ham and Man City (each 13).

Sheffield Utd (9), Southampton (10) and Burnley (11) are the only sides to concede more goals than Crystal Palace (8) over their respective last 4 away matches, while no team has given up more than the Eagles’ 17 big chances. 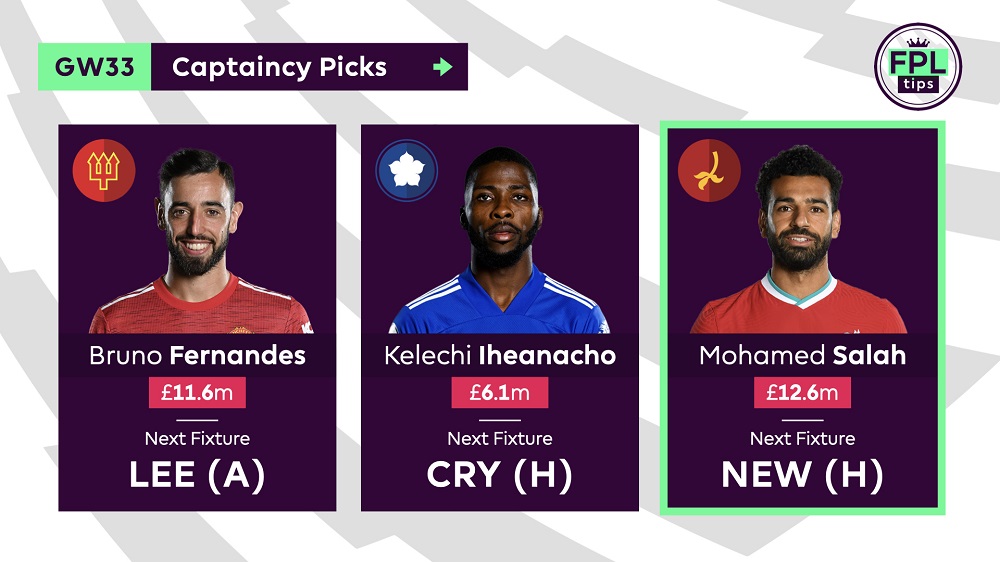 Out in front with 53% of the vote, it’s Mohamed Salah who leads the pack.

The Egyptian was surprisingly left out of the starting XI against Leeds, having scored in each of his previous two Premier League outings.

In the last 4 Gameweeks, no midfielder has fired as many as his 14 shots, while only Greenwood and Jota can equal his 11 efforts from inside the box.

Only Kane (6) has racked up more than his 4 big chances in that time, across all positions.

But Liverpool have scored just 3 goals in their 8 home matches this calendar year; a tally shared only by Fulham, with no side managing fewer.

Newcastle have shipped 7 goals in their last 4 on the road; with only five teams faring worse.

But the Magpies have only conceded 6 big chances in that time; only Man Utd (4), Man City and Chelsea (each 2) have restricted opponents to fewer.

Who will be YOUR Gameweek 3️⃣3️⃣ FPL captain?

BEFORE YOU GO… Our official Daily Fantasy Sports Partner, FanTeam, are offering all NEW customers a FREE ENTRY to this week’s Gameweek 33 Fantasy Premier League contest, which has a £11,000+ guaranteed prize pool.

Simply register for your free account here, or by clicking the banner below and once you’ve signed up, you’ll automatically receive a FREE ENTRY to this weekend’s Gameweek 33 Weekly Monster, which has a guaranteed prize pool of £9,000+ – with around £1,000 going to the first place winner!

Using your 105M budget – just like FPL, pick your best 11-man squad (no subs) for Gameweek 33 only – imagine you are playing your Free Hit chip. The contest kicks off at 20:00PM BST on Friday the 23rd of April and covers 8 Gameweek 33 matches only. 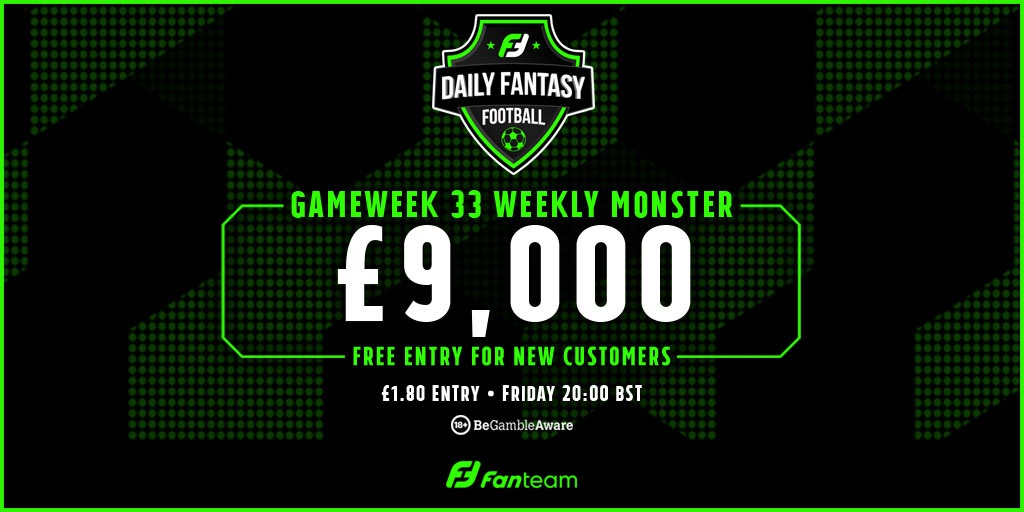