The FanTeam Million is less than 24 hours away and the Fantasy Football Pundits are shooting for the €200,000 1st place prize

If you’ve yet to check out FanTeam, or you’ve seen it advertised but have yet to register and get involved, please read our Intro to the €1M game here.

We’ve opted for a reasonably balanced lineup, including the most expensive defender, midfielder and attacker into our team, with a good amount of depth in the squad to account for both injuries and potential pandemic-related fixture complications.

Primarily looking to set up in a 3-4-3 formation, our two budget attackers enable a strong midfield and defence.

Our first goalkeeper making the team is Illan Meslier (4.0M). Tipped by most Leeds fans to be their regular starting ‘keeper, Meslier has the potential to provide excellent value at the minimum price of 4.0M.

With Leeds conceding less goals (35) last season than Sheffield United did the season before their promotion (41), we’ll be hoping he can put up fantasy numbers like Dean Henderson did for the Blades last season.

With Martin Dubravka (5.0M) ruled out of the first few weeks of the season, Karl Darlow (4.0M) looks set to be another minimum price GK starting for their team at the start of the season. Darlow will start for us in gameweek 1 as Meslier plays Liverpool away.

Clean sheets, assists, goals, and winning impact points all come at such a regular rate for Alexander-Arnold that he feels like the perfect fantasy asset.

Whilst Robertson (7.0) has looked impressive, I still can’t see past TAA for that top price defender slot plus, the fear of missing out is too strong.

The second defender in our team is Virgil Van Dijk – 6.0M. This price looks to me to be a bargain for Van Dijk. His spot is as nailed as they come in last season’s best defence in the league, and he’s scored in 1 in 10 Premier League appearances since arriving at Merseyside. We’ll be having some of that. 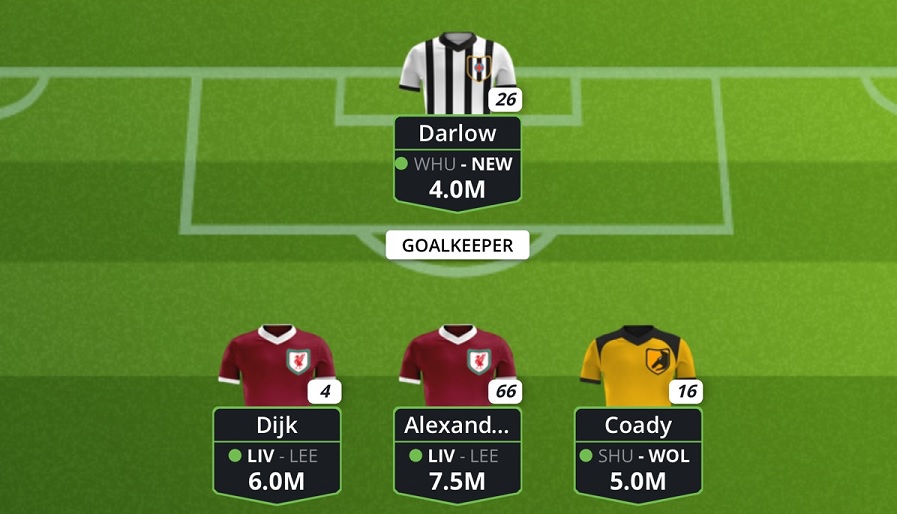 Whilst Romain Saïss (5.0M) offers more attacking threat, Coady’s position in the starting XI is more secure, as there has been suggestion that new signing Marçal could play the LCB role for Wolves as he often did for Lyon last season.

Wolves have one of the best defences in the league, boasting the 2nd lowest expected goals conceded (xGC) figure over the course of last season with 37.39, behind only Manchester City with 37.00.

With Nick Pope priced at 5.5M, Charlie Taylor looks to be great value at 4.5M as a way into an extremely stubborn Burnley defence, and he’s also capable of getting an assist every now and then as well.

With rumours of Ruben Vinagre (4.0M) leaving Wolves, White looks to me to be the most nailed-on starter of the 4.0M offering on FanTeam.

With his excellent season with Leeds last year and Brighton’s seeming unwillingness to sell him, all signs point to the Englishman playing a significant role in Graham Potter’s plans for the season.

Our first midfielder is the Egyptian king himself, Mo Salah. Similar to Alexander-Arnold (7.5M), Mo has so many routes to points that make him an attractive pick who I wouldn’t want to go without.

Clean sheet points, often getting an extra point for playing the full 90 minutes and surely lots of impact points for wins, Salah is the type of player who, even when he fails to return, could still bag 5 points. A safe and reliable captaincy option is invaluable.

Our second midfielder is Raheem Sterling – (11.0M). Priced at a whopping 1.5M less than teammate Kevin De Bruyne (12.5), Sterling felt a no-brainer after some vintage post-restart form which included a hat-trick away at Brighton.

This is a risk from gameweek 1 as we are yet to see how he will be deployed in Lampard’s system, but with so many routes to points I can see Havertz cementing himself as a solid and consistent option at this price point. 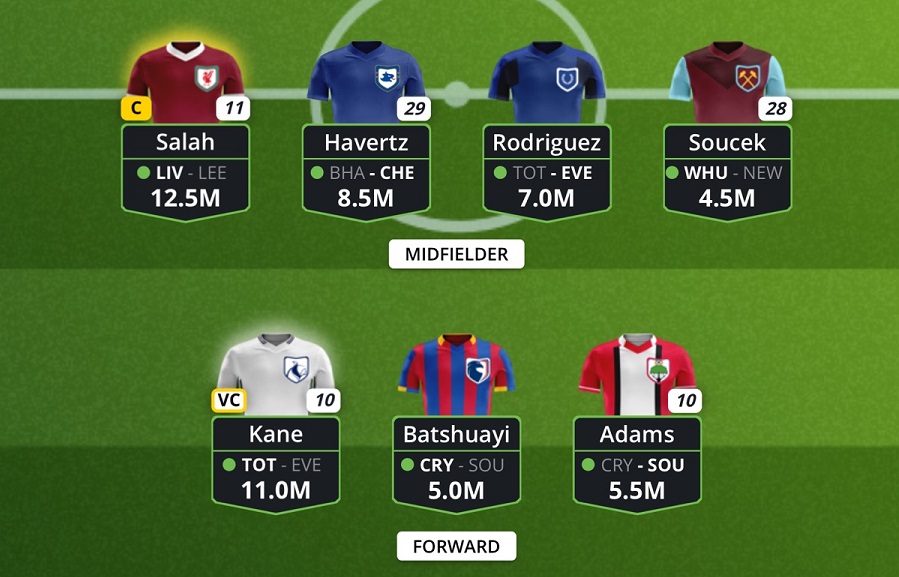 Another risk to include from the opening gameweek, but I think many are forgetting the quality this man possesses.

The underlying stats he puts up are still very impressive, and with Dominic Calvert-Lewin priced at (8.0M) from the same attack, it’s tough to see better value than James around the 7.0M price point in midfield.

Enabler after being cleared ready to start GW1. Souček had a great end to last season, getting a goal every three games for the Hammers through his marauding runs into the box, primarily from set pieces, continuing his excellent goalscoring form found from his time playing in the Czech Republic.

His place in the starting XI should be assured, so we’re hoping he can chip in with a goal or two for me over the season when he needs to be called up to our starting XI.

Mr. Consistent starts the season with some very kind fixtures, and carrying some vintage form out of Project Restart, picking up 5 goals in Spurs’ last 3 games of the season. He’s a consistent 90-minute-man when fit, so he should see a significant amount of extra points for lasting the full 90.

Generously priced, Adams had an impressive end to his 19/20 season, form which I’m hoping will see his place alongside Danny Ings (8.5) in the starting XI mostly assured.

Adams was putting up similar underlying numbers to Ings by the end of last season, so if he can come anywhere close to matching him for points, Adams could be a great value budget option.

Another risk going into gameweek 1, but it’s hard to see a world where Batshuayi doesn’t feature with reasonable regularity in this Palace side, making him a potential huge source of value at 5.0M.

With no Aubameyang in the side, our gameweek 1 captain is a reasonably straight-forward decision – Mo Salah (12.5M) takes the armband.

No other player in the game has matched his consistency for scoring points at home over the last three seasons, and whilst we predict Leeds to be a tricky opponent for Liverpool, the buffer of Mo’s various routes to points makes him our best option going into gameweek 1 in our opinion.

With no Free Hit or Bench Boost chips available on FanTeam, we’re of the opinion that our first wildcard will best be utilised in dealing with the GW18-19 blanks and doubles, so have avoided the need for any transfers in advance to try and maximise flexibility with the information learned in the early gameweeks.

There are definite benefits to playing an early wildcard, and we understand why managers will be planning on using it early, but for our circumstances, this felt like the best play to make as we felt we could navigate the gameweek 1 blanks without the use of any chips. But of course, what lies ahead is unknown, but, it’s nice to have a plan regardless.

If you’d like to join us in FanTeam’s 1 MILLION EURO season-long Fantasy Premier League contest, click HERE to read what it’s all about.

If you’re already aware of what FanTeam is and how to play, then click the prize-pool banner below and register today.

Please note, the Gameweek 1 deadline is the same as FPL – 90-minutes before the Arsenal vs Fulham game on Saturday the 12th of September.