Ings, Jimenez and Calvert-Lewin lead the front line for us in FanTeam’s €50,000 Weekly Monster for Gameweek 28.

Hello and welcome to the first of a new weekly article, where we, the Fantasy Football Pundits, show you the team we enter into Mon FPL tournament, which is a GUARANTEED payout, each and every Gameweek.

For those of you new to FanTeam, the point scoring system is very much like the FPL game we all know and love – only this time, you can win CASH. Some serious CASH!

The €50,00o contest, named the ‘Weekly Monster’ by FanTeam, starts with Saturday’s 3pm kick-offs – allowing you to concentrate on locking in your FPL team for the Gameweek first.

The deadline for entering your team is 3pm, meaning there is no need to second guess Pep’s Roulette, or whether Jurgen Klopp will rotate his pack with the Premier League all but wrapped up now – check the lineup’s at 2pm and choose that differential who’s been given an unexpected start.

If you have any questions about FanTeam, please feel free to tweet us at @FFPundits and @FFPundits_Drew – we’d love to hear from you but more importantly, see your lineups prior to kick-off and offer you any advice and suggestions.

We play Fantasy Football for attacking returns, not clean sheets – so we won’t be spending too much of our budget on a goalkeeper, especially given the unpredictable nature of this exciting 2019-20 Premier League season.

Despite Nick Pope‘s fantastic form of late, producing three clean sheets and a penalty save in only his last five games – Newcastle’s home advantage makes them the bookies favourites, meaning we can pick up Pope for the reduced price of 6.8m.

Newcastle cannot find the back of the net this season, having failed to scoring in their last three Premier League outings and we don’t see that changing on Saturday.

Now we start to roll out some of the big guns. Whilst triple Liverpool feels essential, Liverpool assets are the priciest on FanTeam for Gameweek 28 and therefore, cannot afford to own both Salah and Mane, which mean’s it’s a double Liverpool defence this week, away to Watford.

First up it’s Trent Alexander-Arnold. An absolute must-own on both FPL and daily fantasy these days.

As Liverpool’s set-piece-taker and the added bonus of a potential clean sheet – we feel his 11m price-tag can be justified this week, so in he comes.

Partnering him is the mighty Virgil van Dijk. Ideally, we’d have opted for Andrew Roberton, but the extra £0.3m would mean sacrifices elsewhere we weren’t willing to make.  We’re ready for the Dutchman to score a towering header from a TAA corner on Saturday evening.

Finally, completing the defence, is Wolves wing-back Matt Doherty (6.4m), who provided an assist last Sunday and has three clean sheets from his last three games.

He was noticeably more involved in the attacking third with Adama Traore on the bench and whilst his away fixture to Spurs might deter many from picking him, the fixture is of no concern to us.

UPDATE: This article was written before we heard of Martial’s thigh injury, which he sustained in training. We’ll keen an eye on updated from the club and Ben Dinnery and if forced to remove Martial, we’ll update this article accordingly.

We move on to the Midfielders now and first up is our Gameweek 28 Captain, Mo Salah (13.8m).  There isn’t much to say here – you all know what Salah is capable of – quite simply we couldn’t enjoy this weekend’s football without him in our side so, in he goes without any hesitation.

The bookies have chosen Everton as favourites for their tie with Manchester United this weekend – which means there is great value to be found within Ole Gunner Solskjaer’s midfield on FanTeam.

Priced at 8.0m and 8.4m respectively, Bruno Fernandes and the out of position Anthony Martial could be the bargains of the Gameweek – between them they have three goals and two assists from their last two outings for United.

We may fancy Manchester United to score 1 or 2 goals this weekend, but Everton have been in goal-scoring form themselves of late and Richarlison (9.0m) is a player we admire, especially now he’s back out on the left side due to the form of striker Dominic Calvert-Lewin.

Finally our front three – a trio who have an astonishing THIRTY NINE goals between them already this season and continue to look on paper. Just look at them!

Danny Ings has a fair price-tag of 9.4m this week – Southampton are favourites to win and as for West Ham’s defence – well, I had to look all the way back to New Year’s Day to find their last Premier League clean sheet.

Dominic Calvert-Lewin‘s form makes him fixture proof, scoring four goals in his last five games made it twelve for the season – he was unlucky not to score a hat-trick vs Arsenal and at 8.8m could prove to be solid value and a differential on FanTeam.

Lastly, it’s Raul Jimenez who complete’s eleven, for only 8.0m – surely that pricing is a wonderful error we can all benefit from? Well the bookies have Spurs as the favourites in this one and that’s something we certainly don’t agree with. We’re expecting a confident performance and a Wolves win, with plenty of goals.

We were tempted to back the goal-scoring form of Diogo Jota, however, Jota is a risk due to his reduced attacking threat IF Traore is on the pitch.

Two goals from Jota’s hat-trick in the Europa League this week, as well as his brace in the Premier League last weekend, came with Traore on the bench

We expect Traore to be back in the starting eleven vs Spurs, which means we’ll stick with the ever-reliable, Raul Jimenez.

Taking all the above in to account, here’s how we’ll lineup for the Gameweek 28 Weekly Monster €50,000 Guaranteed tournament on FanTeam.com as we aim to win the 1st place prize of around €5000. 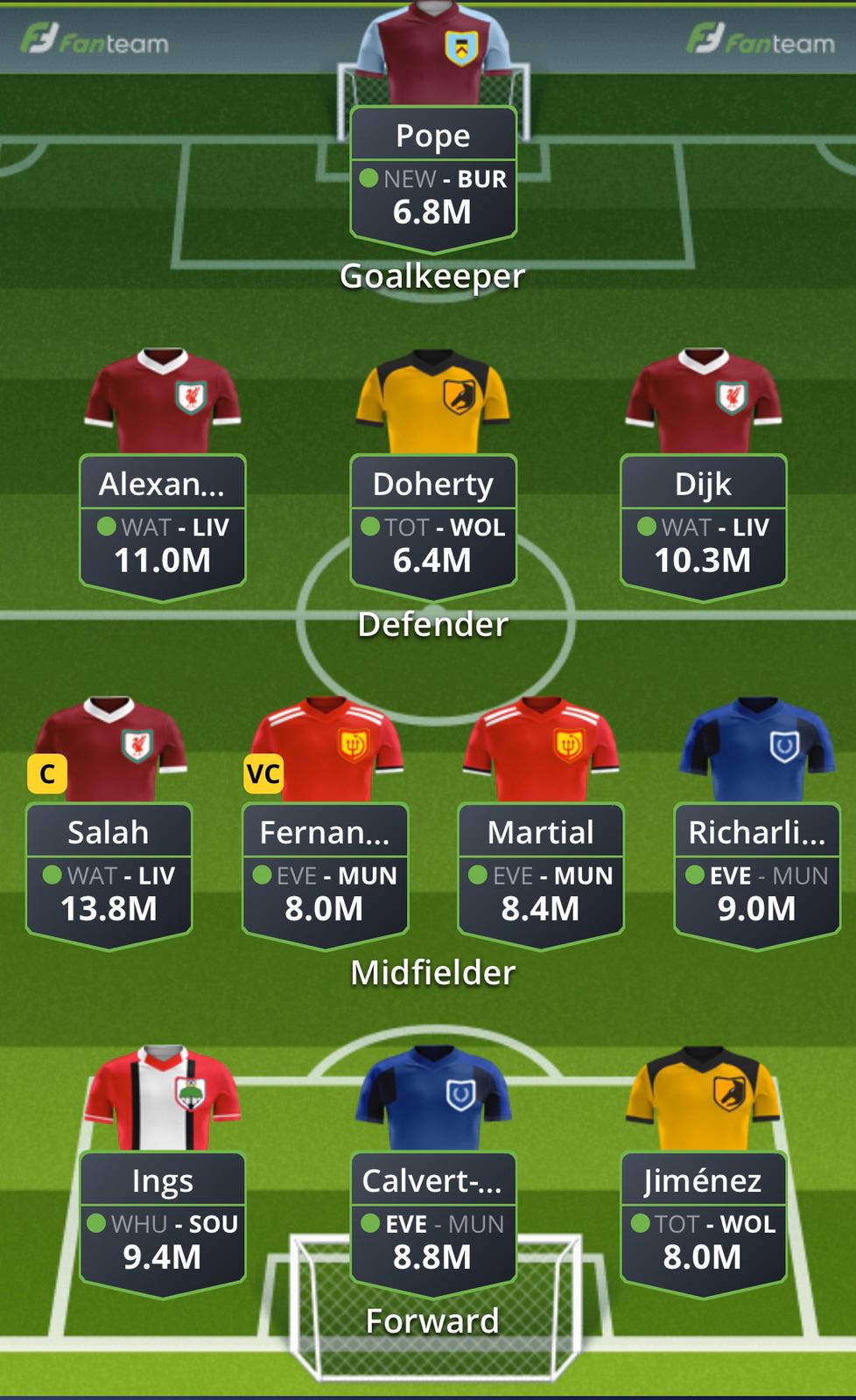 Each and every week, FanTeam offer this €50,000 guaranteed prize-pool – no matter how many users enter, it will always payout the guaranteed €50K.