After a few hours of tinkering since the fixtures were released yesterday, it’s finally time for FPLTips to build their first draft!

There’s still more than 3 weeks left before the season gets underway and lots can change in that time, so there will of course be an updated Team Selection video closer to the Gameweek 1 deadline.

This team has been put together with only the first 5 Gameweeks in mind, so the early fixtures play a key part in the decision-making process.

Amongst the £4.5m goalkeeper options, Alex McCarthy stands out with a favourable run of opening fixtures.

With doubts remaining over Tom Heaton’s availability, Ørjan Nyland gets the nod as backup.

Unsurprisingly, Trent Alexander-Arnold is the first man to lineup in defence, having been handed a generous £7.5m price-tag despite his 210 FPL points last season.

With Ricardo Pereira still currently sidelined, there could be some early action for Leicester’s James Justin.

The Foxes have home ties with Burnley, West Ham and Aston Villa in the opening 5 Gameweeks.

Sheffield United begin the season with home matches against Wolves, Leeds and Fulham in the first 5, as well as an away tie with Aston Villa. 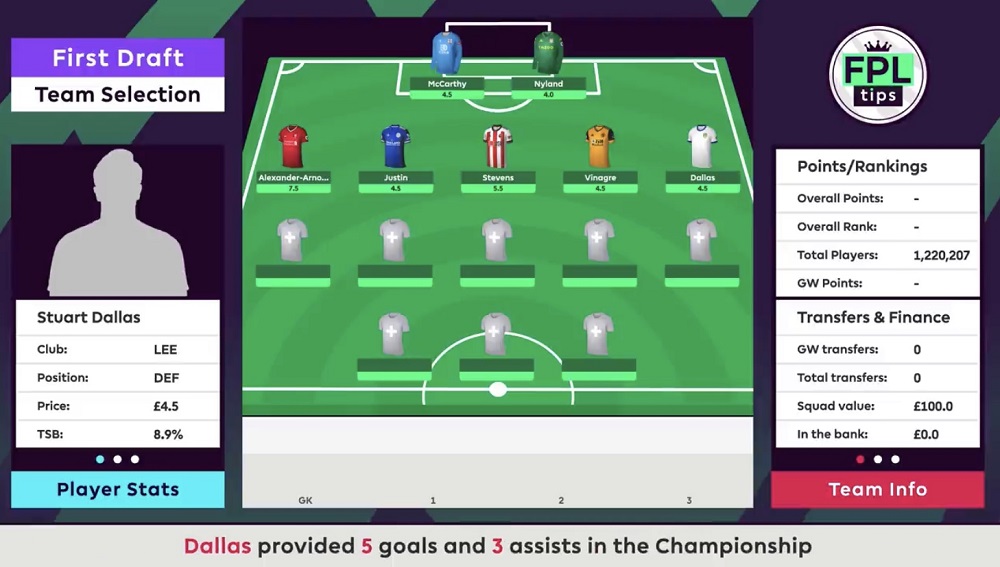 The injury to Jonny could mean a starting place for Rúben Vinagre on the left-flank for Wolves, should they refrain from making a new signing.

They kept 13 clean sheets last season, on par with Sheffield Utd and Leicester; only Liverpool, Burnley (each 15) and Man City (17) kept more.

Opening fixtures against West Ham, Fulham and Leeds in the first 5 Gameweeks could see them get off to a strong start.

Leeds Utd’s Stuart Dallas makes up the final spot in defence, primarily down to fixtures against Fulham and Sheff Utd in Gameweeks 2 and 3, where he’ll be able to cover for Justin and Vinagre – who each face Man City in those Gameweeks.

Alternatively, Matt Targett could be another option for that rotation role.

Mohamed Salah is a fairly easy pick to begin the season, with Bruno Fernandes and Kevin De Bruyne being without a fixture in Gameweek 1.

The Egyptian will be a strong contender for the armband on opening weekend, when the Reds host newly promoted Leeds.

Due to a similar reasoning, Pierre-Emerick Aubameyang is currently in the team as a placeholder, ahead of ties with Fulham and West Ham in the opening 2 Gameweeks.

He’ll most likely make way for either Bruno Fernandes or Kevin De Bruyne in Gameweek 3. 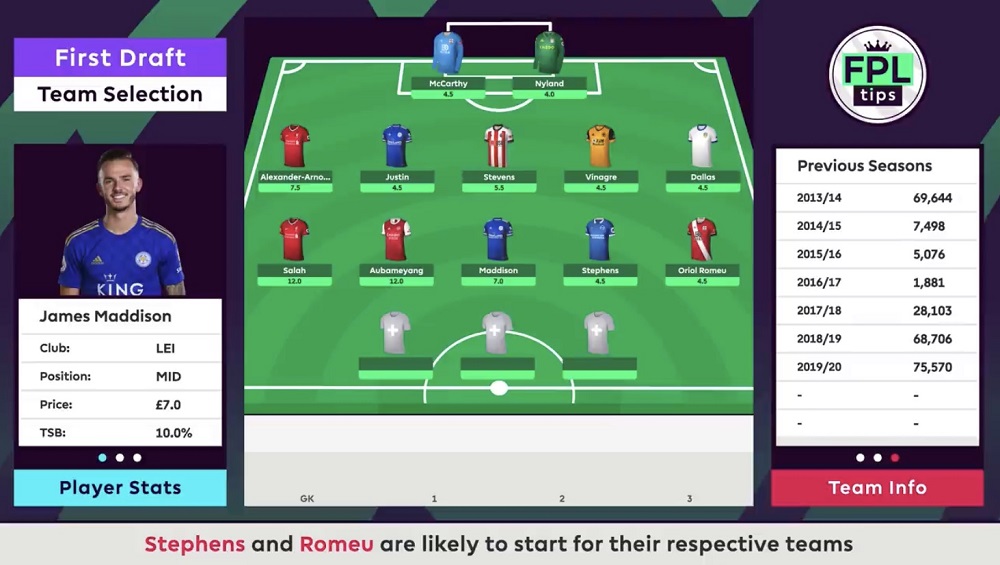 Whilst he can be very frustrating to own at times, Leicester’s favourable opening fixtures bring James Maddison into contention within the mid-price midfielder bracket.

He started strong last season, with 2 assists in the first 3 matches and should be raring to get back out there after an injury ended his campaign early.

The plan is to play a 4-3-3 formation, so the remaining spots in midfield go to bench options Dale Stephens and Oriol Romeu, who should be good for the standard 2 points if called upon.

Harry Kane scored 7 goals in 9 appearances since the restart and has favourable opening fixtures to help him continue that form.

Spurs host Everton, Newcastle and West Ham in the opening 5; where the Englishman can provide a captaincy option.

Danny Ings was one of the standout forwards last season and stayed consistent right until the end; only Antonio and Martial earned more FPL points (58) since the restart amongst forwards. 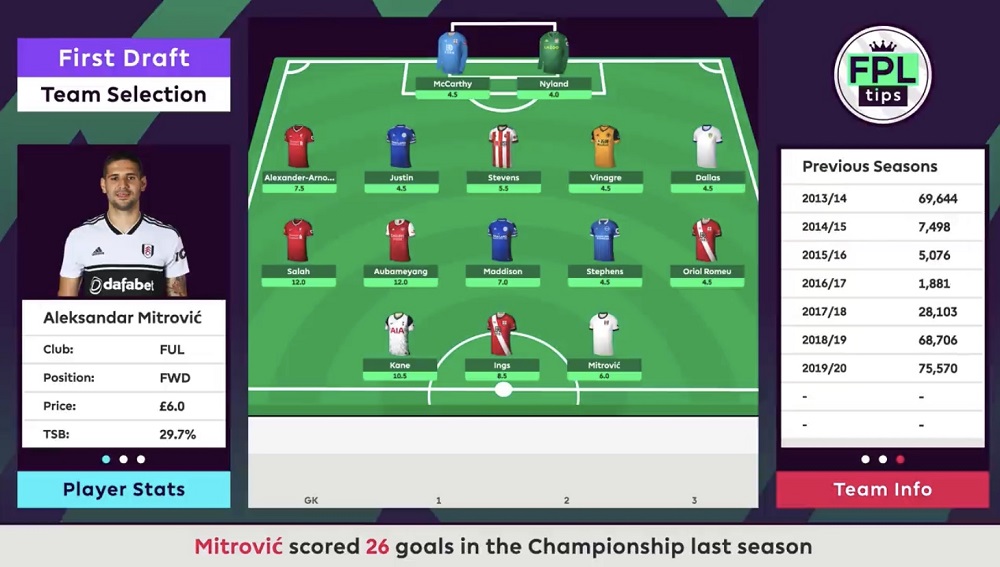 Fixtures against Crystal Palace, Burnley and West Brom in the opening 4 Gameweeks can help him get off to a flying start once again.

Completing the squad is Aleksandar Mitrović, generously priced at £6.0m after finishing as the 2019/20 Championship top goal scorer.

Fulham’s opening run is fairly kind, with Sheffield Utd being the only side rated higher than a 3 on the FDR across the first 9 Gameweeks.

Mo Salah gets the nod for captaincy in Gameweek 1 as it stands, although it is only early days and lots can change over the next 3 weeks.

Aubameyang and Kane are the other captaincy candidates across the first 5 Gameweeks in this current draft.