Most of us love a private cash league with our friends, families and work colleagues when it comes to Fantasy Premier League.

We all like doing battle for a few hundred pounds each season, so what do you say to the thought of winning your share of £1,000,000?

Intrigued? We thought you might be, as we were when we first heard about it.

There’s £1,000,000 in cash up for grabs just by playing fantasy football this season.The best thing about it? It’s almost exactly like our beloved FPL game we love to spend so much time obsessing over.

There’s a new kid on the block when it comes to fantasy football – they’re called FanTeam and this season, they’re running a season-long fantasy football game where you can win some serious, serious money, but you MUST be 18 years of age or older to play. 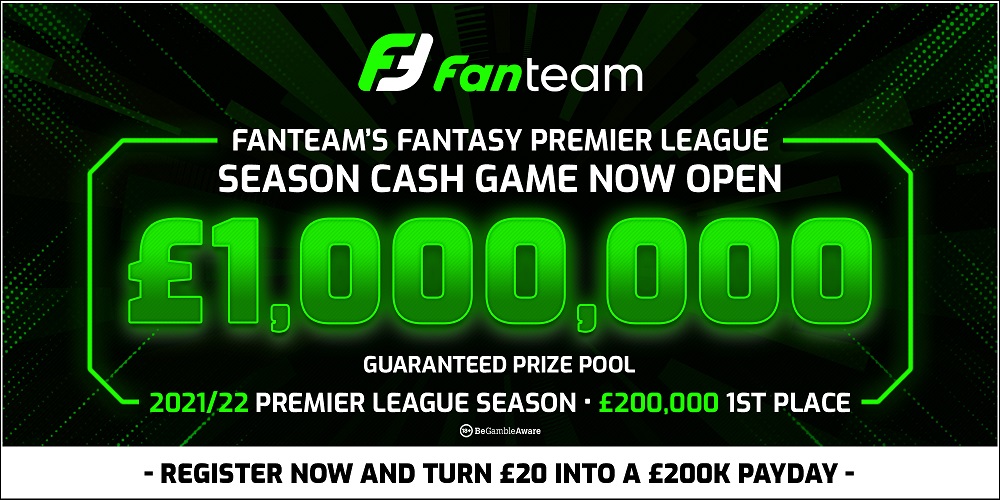 If you’re an avid Fantasy Premier League player, like we are, you’ll fancy your chances too because the game is very similar, with only a few subtle differences to FPL – but we’ll touch on these later in the article.

There’s more too – this season there is a £25,000 Prize Pool for the highest single gameweek scores. If your season game is not going well there is still plenty to play for all season long. We’re tempted to enter a team just to play for this! The £25,000 will be split between the top 10 highest gameweek scores, with first place winning £10,000! 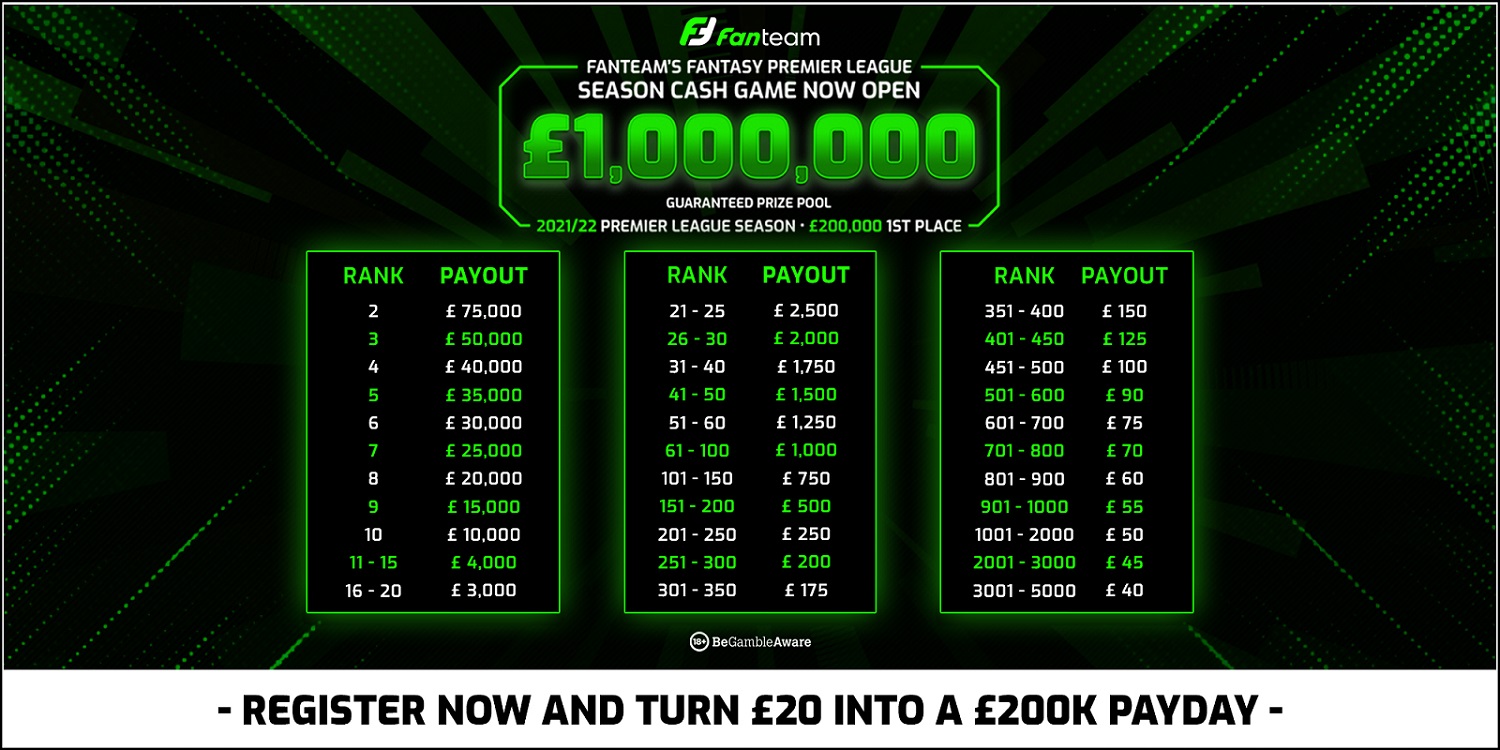 This is a season-long game, just like FPL. The scoring is very similar to FPL but with some slight differences. Firstly, there are no bonus points, instead players will earn or lose ‘impact’ points (+0.3 for a win, -0.3 for a loss).

There are also points lost if a player concedes a penalty or free kick which directly leads to a goal.

Also new for this season, FanTeam have added points for a shot on target (+0.4 for mids and fwds, +0.6 defs & +1 for gk’s). This all adds to the excitement of watching a game live and rooting for your players to have shots!

Transfers follow the FPL format too, with 1 transfer per gameweek, and a -4 points hit if you make more than one move. You can roll transfers as you can in FPL, up to a maximum of two. 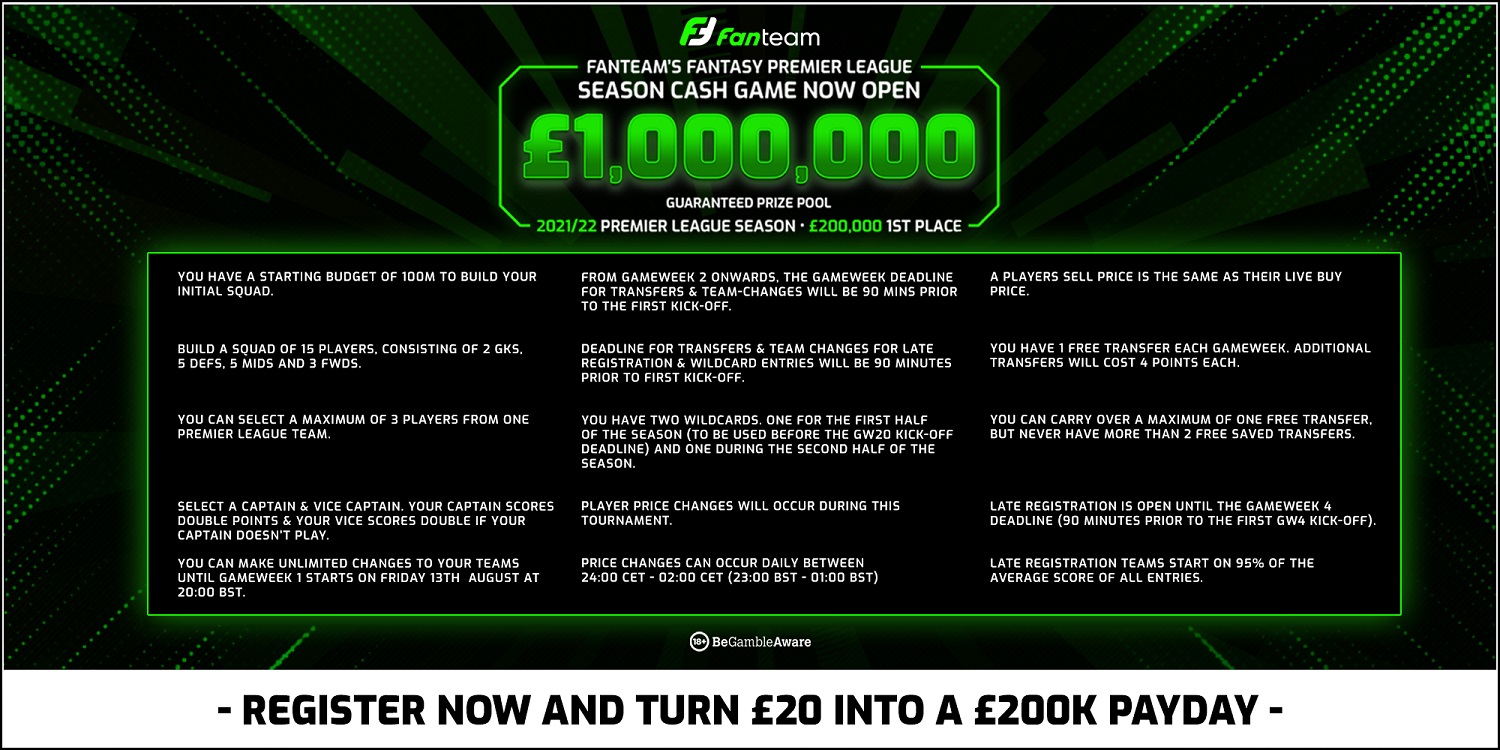 [A full breakdown of their scoring, rules and T&C’s can be found on their website – FanTeam.com]

There are also two wildcards – one to be played in each half of the season, just like on FPL – but there’s no free hit, bench boost or triple captain chips – a difference which may well appeal to the purists among you!

There’s the same 100M budget for 15 players and has a similar pricing structure to FPL, which allows you to copy your FPL team on FanTeam with minimum effort if you wish.

So it’s essentially Fantasy Premier League with a few small and subtle differences… and one big difference. You’re playing for a prize pool of one million pounds. 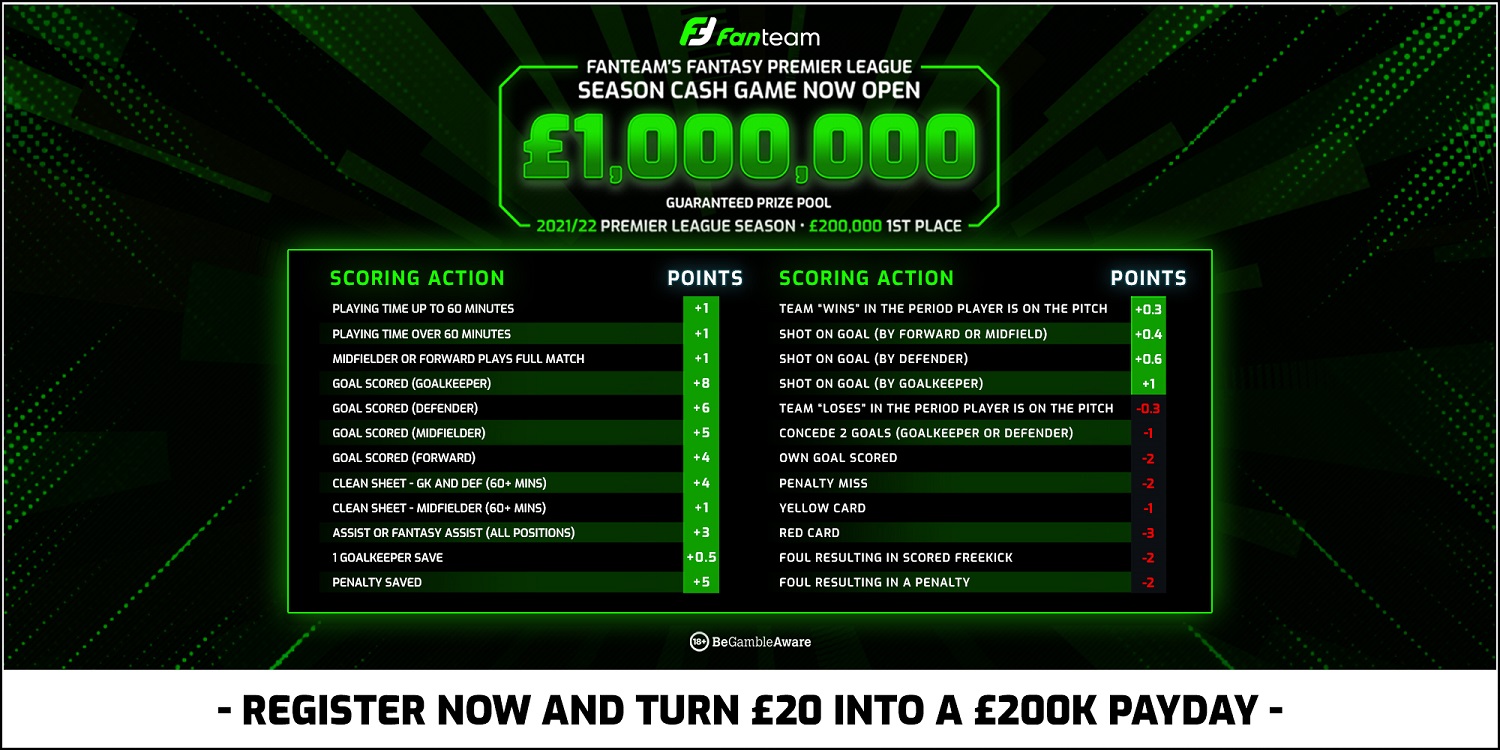 I’ll say that again. One. MILLION. POUNDS. Staggering. It’s guaranteed too. This means that regardless of how many players enter, the £1,000,000 will be paid out, no matter what.

The entry is £20 which is no more than a lot of you will pay for a cash league with your mates or the football crew at work. However, instead of playing for the £120 top prize in your private league, with maybe money-back if you finish 2nd or 3rd, we’re now talking mega, mega money.

All for playing Fantasy Premier League with a couple of small twists. You could even run your FanTeam squad alongside your FPL team with minimal effort, and get paid for it.

We all spend so much time playing FPL and other variations don’t tend to come close for most of us, but we believe this is the one that will.

There’s more to FanTeam than just this competition but that can be for another time – for now, this is the one to be familiarising yourselves with because there’s a lot more than pride at stake here.

All of us here at Fantasy Football Pundits will be playing FanTeam this season, so we’ll be running a series of articles over the next few weeks as the new season unfolds and we hope you’ll join us on this exciting journey?

As an added incentive for our loyal readers, if 250+ of our readers sign up before Gameweek 1 kicks off on August 13th, which we’re confident will happen, we’ll run a prize draw for everyone signing up using this link and give 10 of you your £20 entry fee BACK!

More details to follow on this over the coming days, but please don’t hesitate to contact us with any questions you might have about this brilliant game and opportunity.

We’ll leave it there for now ladies and gents, as there’ll be plenty more content and information on its way over the coming days and weeks, but for now, register for your free account using the banner below and check the game out for yourselves. You won’t be disappointed.