Welcome back to the ‘FPL Captaincy Picks’ series, where we’ll be discussing the top 3 Fantasy Premier League captain options for the Gameweek ahead, as voted for by the FPL community over on our Gameweek 1 Captains Poll on Twitter.

With just a couple more days until the return of the Premier League, it’s time to take a look at that all-important captaincy decision for tGameweek 1.

Here’s a look at the results, as things stand: 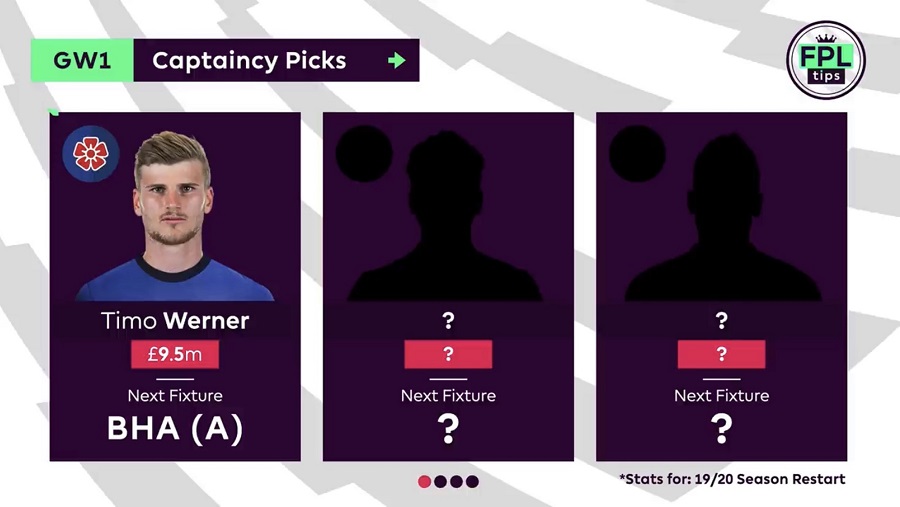 With almost 10% of the vote, Time Werner comes in at number 3, as he prepares to make his Premier League debut against Brighton.

Primarily playing through the middle as a centre-forward, Werner scored 28 goals in 34 Bundesliga appearances last season; only behind Robert Lewandowski (34).

He remained consistent throughout, delivering 7 goals and an assist in 9 appearances, following the restart.

Chelsea scored an impressive total of 39 goals on the road last season, with only Man City (45) faring better.

Across home and away, only Sterling (33), Vardy (34) and Jesus (36) were afforded more big chances than Tammy Abraham (31), so we can be assured that Werner is stepping into a very formidable attack. 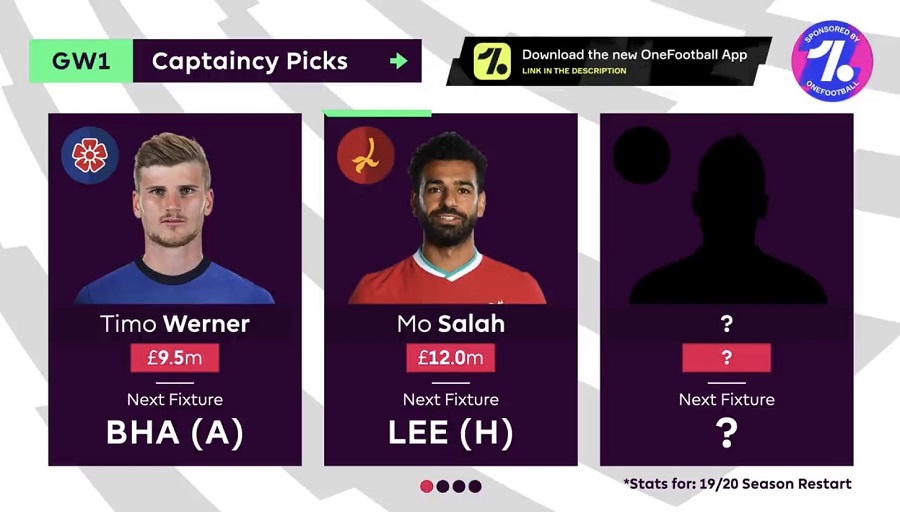 Mo Salah sits in 2nd place, receiving over 32% of the vote.

The Egypt international went without a goal in his last 4 Premier League matches, as his hunger for the Golden Boot seemed to lead to him snatching at chances.

In that time, no FPL midfielder took more than his 16 shots – 14 of which came inside the box, while only Sterling (6) had more than his 4 big chances.

Throughout the restart period on the whole, however, he still managed a respectable average of 5.9 points per game.

His record at Anfield throughout the past 3 seasons can’t be overlooked, with 62 goals, 20 assists and 489 FPL points recorded; an average of 8.7 points per game. 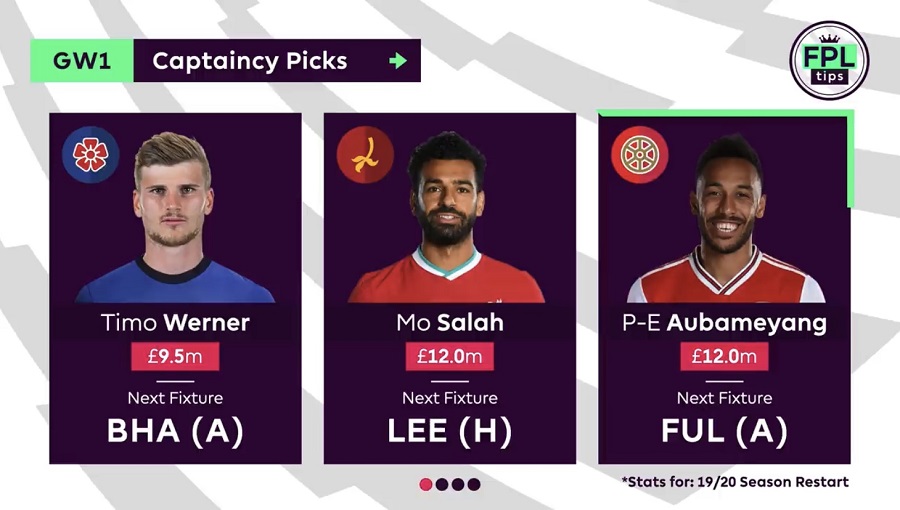 Storming into the number 1 spot with over 50% of the vote is Arsenal talisman Pierre-Emerick Aubameyang.

He finished the season with 22 goals, just one behind Jamie Vardy but it’s perhaps his more recent performances in the FA Cup and Community Shield that have left him fresh in the minds of FPL managers.

The 31-year-old has scored 7 in his last 5 matches in all competitions, which includes goals against Man City, Chelsea and Liverpool.

They kept 17 clean sheets – 5 fewer than Leeds and shipped 48 goals – 13 more than Marcelo Bielsa’s side.

Who will be YOUR Gameweek 1️⃣ captain?

Thank you for reading ‘Fantasy Premier League Tips: ‘FPL Captain Tips and Picks – Gameweek 1’ which was written and produced by FFPundits & FPLTips.