FPL Form and Fixture Charts for Gameweek's 12 to 14

When making decisions in FPL, a combination of form and fixtures provides managers with the best indication of which teams to invest in.

On a weekly basis, Fantasy Football Community produce charts which consider form over the previous 4 games and the difficulty of the next 4 fixtures.

It’s an important tool to help managers narrow down their transfer choice and we thank FPL Holly, who built and runs Fantasy Football Community for her hard work and time.

The free-flowing prowess of Manchester City has slowed down a little over the last couple of weeks, with some tough upcoming fixtures on the horizon.

However, I suspect they will brush Arsenal aside at the Etihad in Gameweek 11 and we should still be considering a triple-up on their fantasy assets.

Now that budget options are emerging in all positions, managers are able to invest in City players and have a bench to cover any rotation on a given week.

Walker is the best option in defence, in my opinion, since Kompany is returning to full fitness to challenge Stones’ place, whilst Otamendi is just one yellow card away from a suspension.

There’s plenty of options in midfield: Sane and Sterling are the form picks; Silva and De Bruyne are the consistent starters; Aguero and Jesus are the captaincy candidates (if they start)

Select three, strengthen your benches and ride out the rotation – if you cannot handle the weekly torture and uncertainty, you could always dump your City assets and load up on Sanchez and Hazard.

Spurs have made it through a tricky pair of games with varied success and now have better upcoming fixtures – obviously you need Harry Kane in your team if he’s fit to face Palace.

Kane has trained today (Tuesday) with the first-team ahead of their mid-week Champions League clash with Real Madrid, but if Kane isn’t fit to face Palace this weekend, Alli and Eriksen are solid options in midfield, with excellent returns so far this season.

In defence, the full-backs are being rotated around the Champions League games so it’s the centre-backs we need to look at for consistent starts.

Jan Vertonghen roams forward the most when Spurs go for 3 centre-backs and is a threat from set-pieces – at £6.0m, he looks a must-have for Spurs’ upcoming fixtures.

Behind our front-runners, Arsenal, Manchester United and Leicester have the best form over the past 4 fixtures.

Those looking at Arsenal will be quickly deterred given their upcoming fixtures, as they’ve the worst run of any team in the Premier League.

Nacho Monreal and Aaron Ramsey are the form players right now, but I certainly wouldn’t be bringing them in if you don’t own them already.

Manchester United have managed to grind out some reasonable results in this difficult period and after this weeks game against Chelsea, the fixtures are turning for them too. 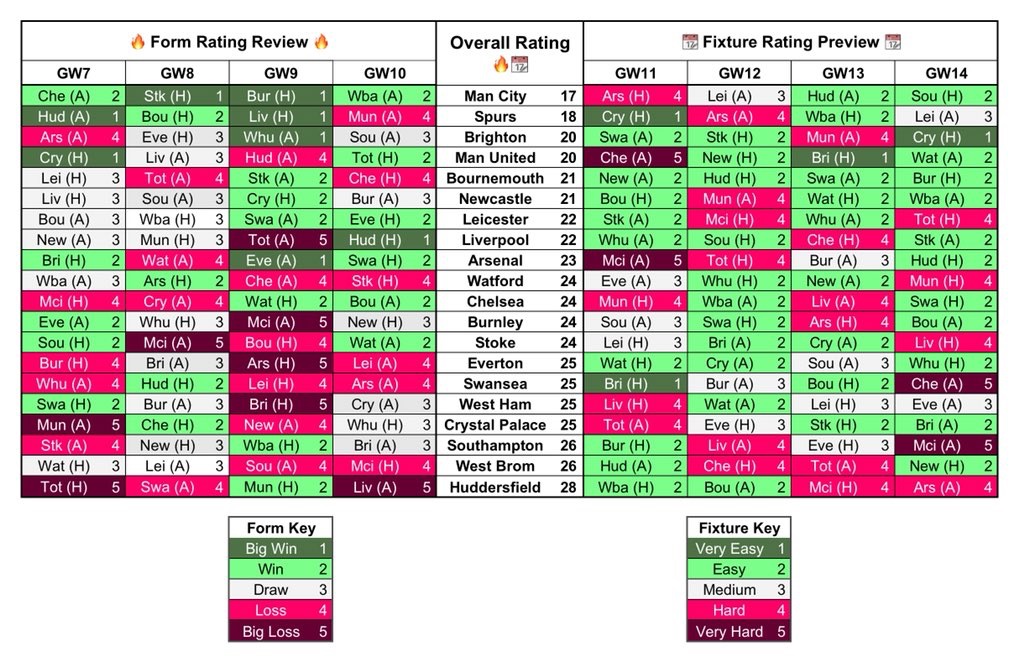 Phil Jones and David De Gea are providing fantastic value in defence – I suggest you get one, or both in before their prices go up further!

Whilst other premium strikers have faltered, Romelu Lukaku has been chipping in consistently with points and will be back on our radar over the coming weeks.

Leicester are revitalised under their new manager and are unbeaten in their last 4 League games.

Claude Puel is known for being a defensive manager, so we could look to Christian Fuchs for clean sheets and assist potential.

Riyad Mahrez has rediscovered his title-winning season form and if Leicester can carry on this run, then expect him to be amongst the goals over the next 3 to 4 gameweeks.

Bournemouth, Brighton and Everton have the best run of upcoming fixtures, in my opinion.

Bournemouth have struggled so far this season and have a number of injury concerns, but Charlie Daniels will be the best source of points if you choose to invest, with attacking returns likely to supplement any clean-sheets.

Brighton have been a surprise package in the Premier League so far this season, with Pascal Groß being the ultimate budget enabler and a must have for the next few weeks.

Glenn Murray is the form player but has been lucky so far and could lose his place with Hemed back from suspension.

The defence also should be considered for investment, with Shane Duffy the stand out option in a budget friendly back line.

Everton have the worst form in the Premier League, but the best run of upcoming fixtures – I’d avoid at least until they’ve got a manager organised.

If you fancy a gamble, Wayne Rooney is the only player to be consistently among the points, but I believe there are better options elsewhere.

Huddersfield, West Brom and Southampton are bottom of the pile this week.

Huddersfield have struggled in recent weeks, other than that shock result against Manchester United.

45% of FPL managers have invested in the West Brom defence this season, but now’s the time to move on to pastures new, if you haven’t already.

It’s a similar story with the Southampton defence who were a popular team for investment from the start, but have failed to emulate their potential.