FPL Tips: Can Spurs and Mourinho Improve Matt Doherty as an FPL Asset?

Matt Doherty completes move to Tottenham from Wolves, but does he remain a hot Fantasy Premier League option?

The former Wolves wing-back recently completed a move to Spurs, where he looks set to replace Serge Aurier, who continues to be linked with a move to AC Milan.

But what does this mean for Doherty as a Fantasy Premier League asset?

Will the move see an increase or decrease in his points returns?

The beauty of Doherty over the past 2 seasons has been his combination of attacking threat and clean sheet potential.

They ranked 5th best in the league with 40 goals conceded, 4th best for shots on target faced (129) and allowed the fewest big chances of any side (47). 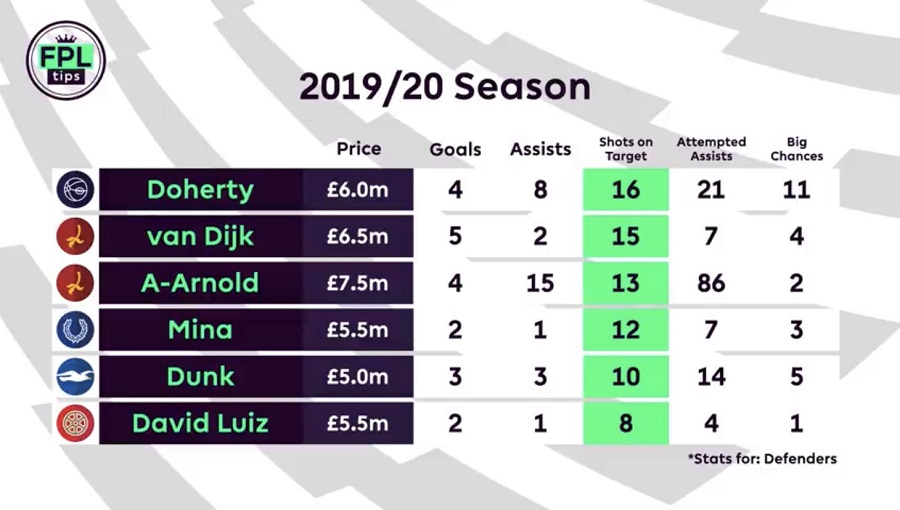 When compared with other FPL defenders, only Alexander-Arnold (44) took more shots than Doherty’s 34.

But despite amassing an impressive total of 8 FPL assists; a figure that could only be beaten by Liverpool fullbacks Robertson (12) and Alexander-Arnold (15), 21 defenders attempted more assists than the Irishman (21).

Spurs kept just 8 clean sheets last season; 5 fewer than Wolves but all except 1 came after Jose Mourinho was appointed as manager, ahead of Gameweek 13.

They continued to improve defensively as the season progressed and by the season restart, from Gameweek 30+ onwards, it was clear that Mourinho had put his stamp on the side and players understood their roles much better.

Over those final 9 Gameweeks, they conceded just 7 goals and kept 4 clean sheets, with Wolves the only side to concede fewer big chances (6 to 8).

Whilst Mourinho predominantly used a back four, Serge Aurier had a more attacking role than Ben Davies on the opposite side.

From Gameweek 13 onwards, the right-back averaged 1.0 attempted assist per 90 minutes, compared to 0.6 per 90 for Davies.

His 1.9 touches in the opposition’s box per 90 was also a big improvement on the Welshman’s 0.9.

Direct Comparison of Aurier and Doherty (GW30+ to GW38)

Perhaps the best indication of the role Doherty might play at Spurs will be gleaned by looking at how Aurier was utilised since the restart, when Mourinho seemed to have his side fully understanding what he was asking of them.

The right-back was given plenty of license to attack, taking 14 touches in the opposition’s box during this period; almost double the amount managed by Ben Davies in the same number of appearances.

But despite his advanced positioning, Aurier provided just 1 assist in 9 appearances. 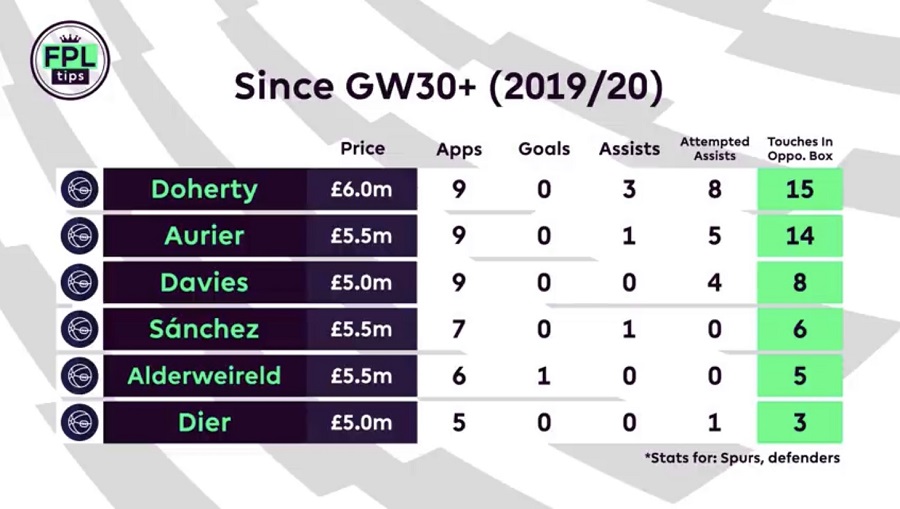 Matt Doherty, meanwhile, managed 15 touches in the opposition’s box over this timeframe for Wolves; just one more than Aurier, despite technically playing as a wing-back rather than a full-back.

He amassed 3 assists and out-performed the Ivorian with 8 attempted assists compared to his 5 and an expected assists figure (xA) of 0.98 compared to Aurier’s 0.20.

So, despite appearing to play similar roles, it was Matt Doherty who was the more prolific in terms of end product.

With Spurs typically enjoying more possession than Wolves, you’d expect him to receive more of the ball, potentially increasing his number of crosses and attempted assists.

These factors, paired with the continued improvement in Spurs defensively and arguably better players around him in Harry Kane and Heung-Min Son, could even see the 28-year-old improve on his previous season tallies.

A kind schedule over the first 8 Gameweeks for Mourinho’s side can help him get off to a strong start.

They have home ties with Everton, Newcastle, West Ham and Brighton and face just one side rated above 3 on the FDR.

BEFORE YOU GO… This season, our partners at FanTeam are offering a life-changing prize pool of €1,000,000 for their season-long Premier League Fantasy game, with €200,000 going to the first-place winner.

Check out our Introduction article to FanTeam’s €1,000,000 season-long Fantasy Premier League cash game here, or grab your free account today by clicking the banner below.

Thank you for reading ‘Fantasy Premier League Tips: FPL Tips: Can Spurs and Mourinho Improve Matt Doherty as an FPL Asset?’ which was written and produced by @_FPLtips