Here are three players who have been added to the Watchlist ahead of Gameweek 11 and are being considered for the @_FPLtips and @FFPundits team.

Next 3 fixtures: Bournemouth (A), Brighton (H) and Sheff United (H) 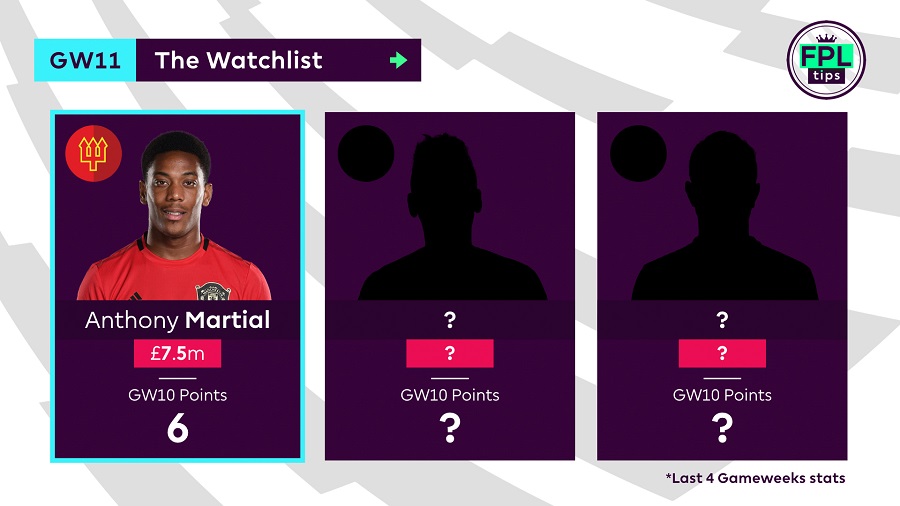 Martial got on the scoresheet during his first league start since recovering from injury, as Man Utd returned to winning ways in the Premier League, with a 3-1 away win over Norwich.

The Frenchman also missed a penalty during the game and no player was afforded as many as his 4 big chances in Gameweek 10, while only Pérez and Salah (each 5) could better his 4 shots on target.

He’s found an FPL return in all 4 of the games he’s started this season, amassing 3 goals and 1 assist, at an average of 6.3 PPG (not including his cameo in Gameweek 9).

The 23-year-old has had an average of 1.28 big chances per 90 minutes, which ranks top amongst teammates.

United have a chance to build some momentum over the next 4 Gameweeks, where they’ll host Brighton and Aston Villa, amongst away ties with Bournemouth and Sheffield United. 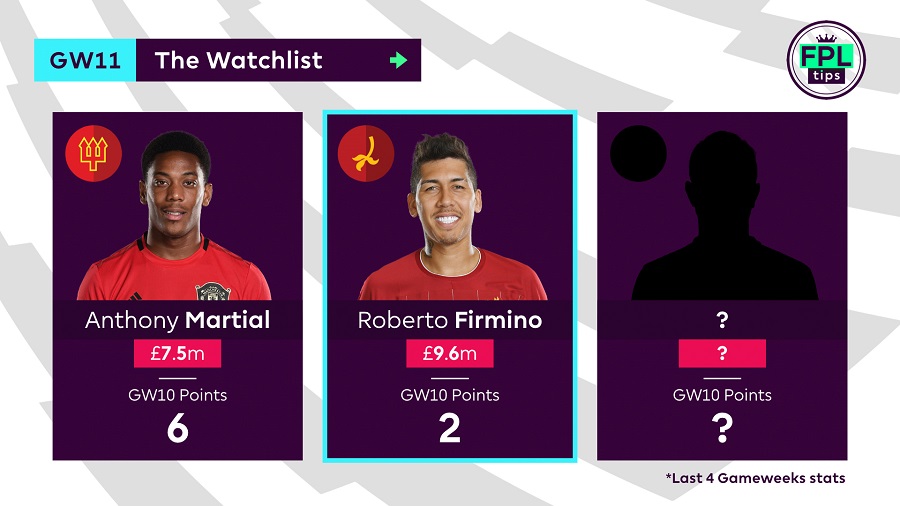 Firmino may look like a strange inclusion, having failed to find an attacking return since Gameweek 6 but he came away with some impressive underlying numbers against Spurs on Sunday.

The Brazilian missed a big chance and had an xG of 0.81, which was 2nd only to Salah amongst teammates, with the penalty being largely responsible for that.

Firmino (1.74) has outscored Mané (1.20) on expected goals (xG) over the last 3 Gameweeks and no Liverpool player has fired as many as his 11 shots inside the box, during that period.

Whilst the midfield duo are each owned by around 30% of managers, Firmino provides much more of a differential, sitting in just 12.5% of teams.

The Reds have a kind schedule over the next 7 Gameweeks, aside from the meeting with Man City at Anfield in Gameweek 12.

Watford held Bournemouth to a goalless draw on Saturday, restricting the Cherries to just 6 shots inside the box; only Everton (5), Bournemouth and Leicester (each 3) allowed opponents fewer in Gameweek 10.

The Hornets have had the joint-best defence in the league over the last 3 Gameweeks, where they’ve kept 2 clean sheets and conceded just 1 goal; an achievement matched by only Bournemouth and Sheffield Utd.

Since Quique Sánchez Flores was reappointed as manager, Janmaat has occupied a right-wing-back role, from where he’s earned 27 points in the last 3 Gameweeks; an average of 9 PPG.

No teammate has provided more than his 3 attempted assists or his 1 big chance created, during that period.

Priced at just £4.3m, he offers a cheap route into an in-form defence, ahead of fixtures against Norwich, Burnley and Southampton in the next 4 Gameweeks.