Each Gameweek, the FPL Watchlist series will be taking a look at some potential future transfer targets for the FPLtips team.

Plenty of players impressed over the weekend and here are the three who make it on to the Watchlist ahead of Gameweek 3.

Please note that all players prices and ownership percentages quoted in this video and article were correct at the time of writing. 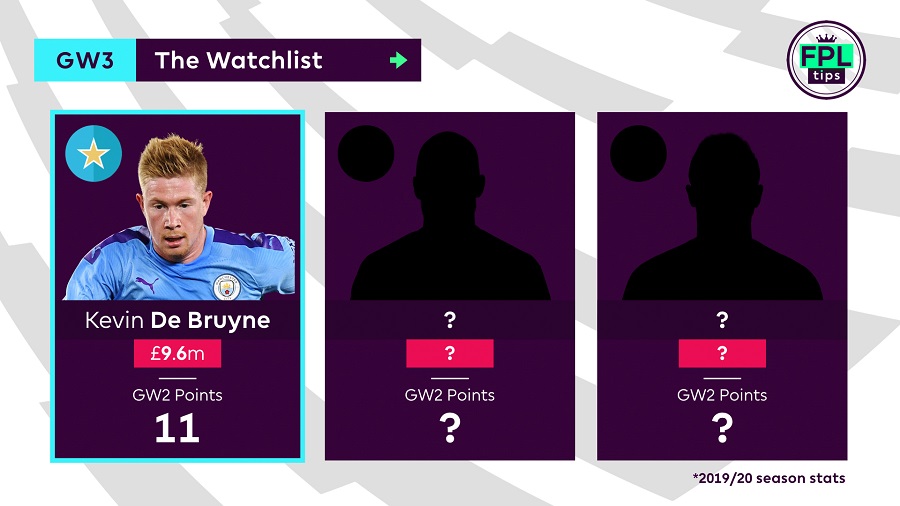 Despite the 2-2 scoreline, it was Man City who had the much greater volume of chances during their draw with Spurs.

They out-shot their opponents by 30 attempts to 3, with no team firing more than their 10 efforts on target during the Gameweek.

Kevin De Bruyne set up both goals for the home side, providing an incredible tally of 9 attempted assists during the match, with 3 of those being big chances created.

Unsurprisingly, the Belgian ranks top across the first two Gameweeks with totals of 12 attempted assists and 5 big chances created.

He also tried his luck at goal on 4 occasions against Spurs, with 2 of his strikes coming inside the box and one finding the target.

The schedule over the next 4 Gameweeks couldn’t be better for Man City; they travel to Bournemouth and Norwich, amongst home ties with Brighton and Watford.

The Cherries have conceded 6 big chances so far this season, with only West Ham (10) allowing opponents more. 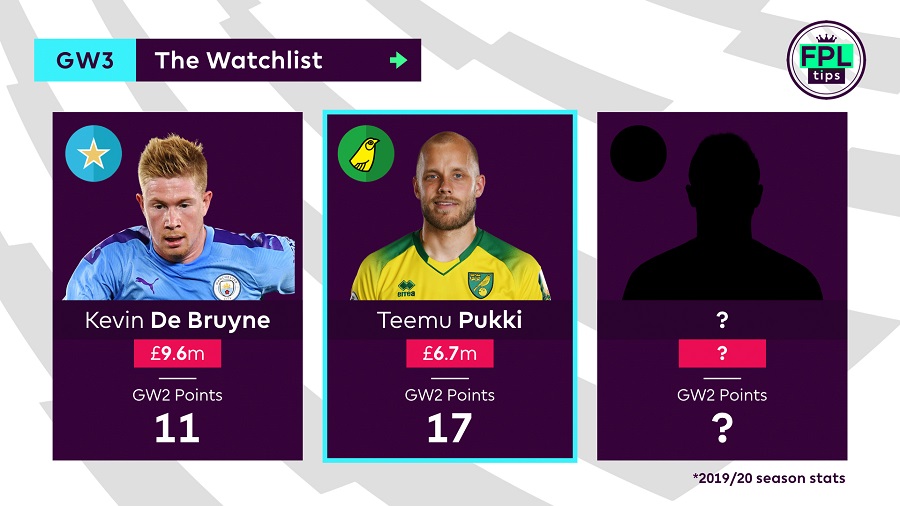 Norwich secured their first win of the season, beating Newcastle by 3 goals to 1.

His tallies of 7 shots inside the box, with 6 on target, were more than any other player during the Gameweek, while only Sterling has matched the Finn for goal attempts (10) so far this season.

Having opened his account against Liverpool in Gameweek 1, he looks completely comfortable with the transition from Championship to Premier League.

Only McGoldrick, Agüero (each 3) and Sterling (5) have had more than Pukki’s 2 big chances during the first 2 Gameweeks.

Despite fixtures against Chelsea and Man City in the next 3 Gameweeks, the Canaries attack still looks promising.

Their 13 efforts on target this season ranks joint-2nd in the league; on par with Liverpool and only bettered by Man City (19). 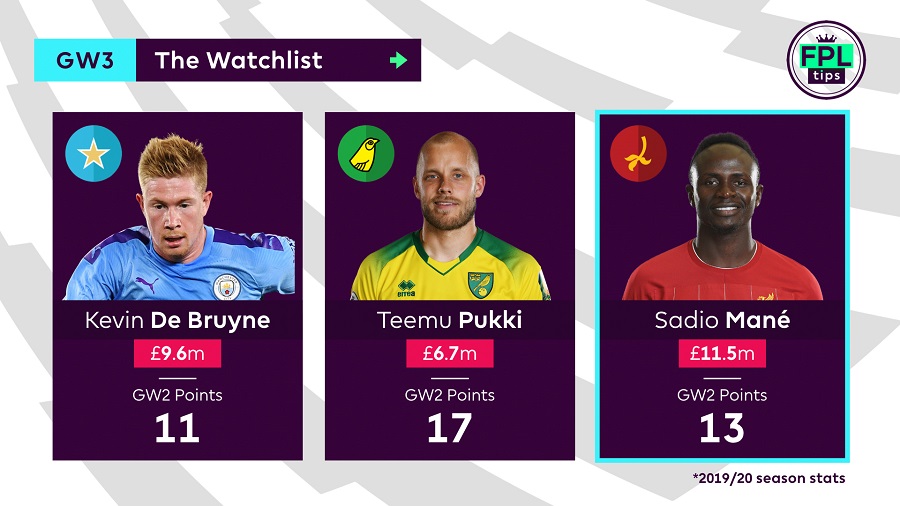 After being eased back in, following a late return from the African Cup of Nations this summer, Sadio Mané looks to have picked up right where left off last season.

His goal and assist helped Liverpool claim the three points against Southampton in Gameweek 2.

2 shots on target by Mané could only bettered by McGinn and Mount (each 3) amongst FPL midfielders, while only De Bruyne created more big chances (3 to 2).

The Senegalese international now has 15 Premier League goals during this calendar year, which is more than any other player.

His Egyptian teammate has performed better creatively, on the surface, recording 5 assists to Mané’s 2 during this period.

However, the pair have almost identical underlying numbers for attempted assists (28 for Mané and 29 for Salah) and big chances created (5 for Mané and 4 for Salah).

It’s hard to justify using a free transfer to make the switch between Liverpool midfielders but it could definitely be something to look at when using the wildcard.