After a couple of low-scoring weeks, Gameweek 10 was much better.

None of the points came at the back, however, as Otamendi was an unused sub for Man City’s 3-0 win over Aston Villa.

There were returns all across the midfield, with Maddison playing his part in Leicester’s ruthless 9-0 win over Southampton, while the Man City duo contributed a goal and assist between them.

The move to bring in Vardy could not have gone better, with the forward bagging a hat-trick against Saints, though Callum Wilson failed to return points for a third successive Gameweek.

An Otamendi replacement will be needed at some point, with the Argentine appearing to have lost his starting place.

But with Tomori as cover again, that may be a move that can wait until next Gameweek.

Instead, the plan is to move Callum Wilson on, with Bournemouth failing to score a single goal in the last 3 Gameweeks.

The fixtures take a turn for the worse now too, with the Cherries coming up against Man Utd, Wolves and Spurs in the next 4 Gameweeks. 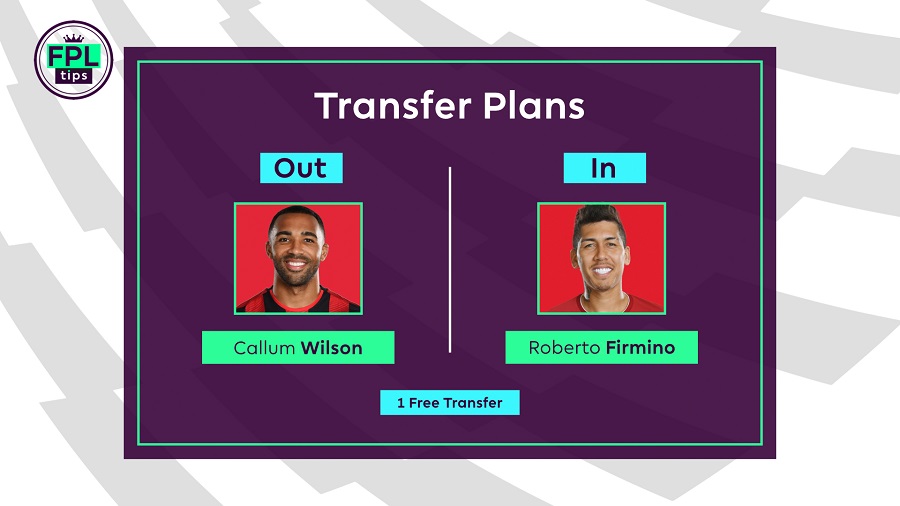 Marcus Rashford is an option to bring in, with United’s form improving ahead of some favourable fixtures but it’s actually Roberto Firmino who’s pencilled in as the replacement.

Liverpool have a kind schedule over the next 7 Gameweeks, facing trips to Villa, Palace and Bournemouth, amongst home ties with Brighton, Everton and Watford.

Here’s how the team is set to line up for Gameweek 11:

Nick Pope has been disappointing of late, averaging just 2.5 PPG in the last 4 Gameweeks.

But he has a chance to redeem himself over these next 4 matches, starting with the trip to Sheffield Utd.

Only Newcastle (6) and Watford (5) have scored fewer goals than the Blades (9) this season.

It could be worth starting Otamendi, with Tomori set to come off the bench to replace him, if he does miss out again.

Chelsea face a Watford side that have scored just 5 goals this season; fewer than every other team.

Alexander-Arnold and Lundstram will keep their places in the XI, ahead of fixtures against Aston Villa and Burnley.

Despite scoring 3 times in the last 5 Gameweeks, James Maddison’s underlying numbers are far from impressive; he failed to create a single chance during the win over Southampton.

But he could find some joy from set pieces once again this weekend; Crystal Palace rank 4th worst for expected goals conceded from set plays this season.

Gameweek 11 sees Man City host Southampton, on the back of their 9-0 thrashing at the hands of Leicester last Friday.

They’ve conceded an astounding 19 goals and 21 big chances in the last 6 Gameweeks. 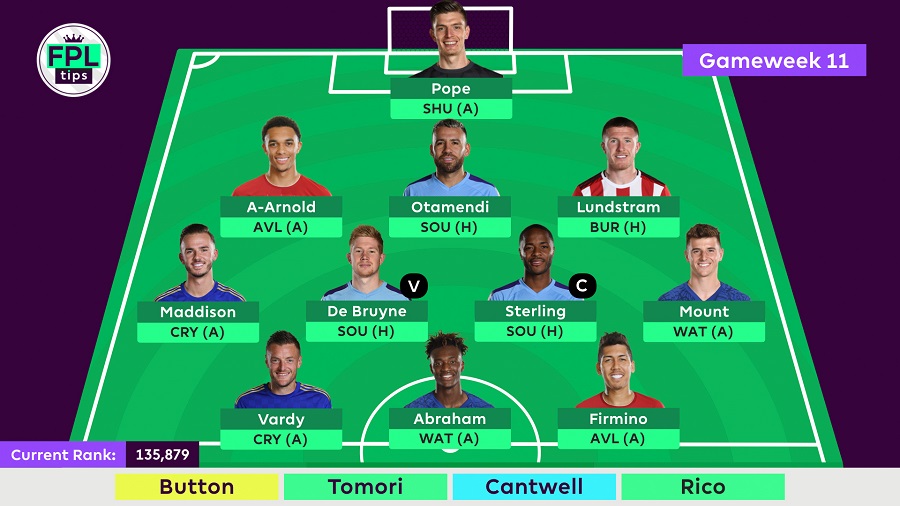 No teammate has produced more than Sterling’s 11 attempted assists in the last 4 Gameweeks, while only Yarmolenko (6) has created more than his 4 big chances during that period, amongst all players.

Chelsea continued their impressive goal-scoring form to put 4 goals past Burnley in Gameweek 10, ahead of their trip to Watford this weekend.

Mount has provided an attacking return in each of the last 4 away matches, amassing 3 goals and 1 assist.

Only Sterling (9) has had more than his 4 big chances on the road this season, amongst midfielders.

Vardy comes into the meeting with Crystal Palace having produced 6 goals and 2 assists in the last 4 Gameweeks, at an average of 10.5 PPG.

Only Abraham (8) and Salah (9) have fired more than his 7 shots on target during that period, while no player has had more big chances (6).

Abraham is the only player to have matched Vardy’s 6 big chances in the last 4 Gameweeks but he’s scored just 1 goal in that spell.

As with Mount, the Chelsea forward has found returns in each of the last 4 away matches and no player has scored as many as his 6 goals on the road this season.

Liverpool forward Roberto Firmino is set to come into the team, ahead of the trip to Aston Villa in Gameweek 11.

The Brazilian is ahead of Mané (1.74 vs 1.20) for expected goals (xG) over the last 3 Gameweeks and no teammate has fired as many as his 11 shots inside the box, during that period.

Aston Villa have shipped 7 goals in the last 4 Gameweeks and only 4 teams have conceded more big chances (11) in that time.

Captaincy could be influenced by how many minutes the two Man City midfielders get in the EFL Cup midweek but as things stand, there’s very little reason to move away from Raheem Sterling.

He’s found returns in 3 of the last 4 Gameweeks and always tends to fare well at the Etihad.

In 12 home matches during this calendar year, the Englishman has amassed 7 goals and 5 assists to earn an average of 7.3 PPG.