Gameweek 11 was all about the now legendary John Lundstram, with the ‘Out of Position’ defender keeping a clean sheet and scoring a brace to earn a massive 21-point haul.

No player recorded as many as his 3 big chances during the Gameweek.

The Man City midfielders disappointed, as the reigning Champions only narrowly edged the win over a much-improved Southampton side, but Maddison found his 3rd assist of the season, producing a league-best total of 8 attempted assists in Gameweek 11.

Vardy (28%) and Abraham (48%) continued to show why they’re the two most-owned forwards in the game, while Firmino was unfortunate to see his goal deemed to be narrowly offside by VAR.

The plan is to make use of both free transfers this Gameweek, with the first move having already been made, to ship out Otamendi.

The centre-back has lost his starting place in recent weeks and so, it was a straight-forward swap to catch Söyüncü’s price rise, after he scored in Leicester’s 2-0 win at Crystal Palace.

No side have conceded fewer goals than the Foxes this season (8) and there are plenty of favourable fixtures for them in the coming Gameweeks.

Sterling is set to leave the team ahead of a fairly tricky upcoming schedule for Man City, where they face 4 of last season’s ‘top six’ teams. 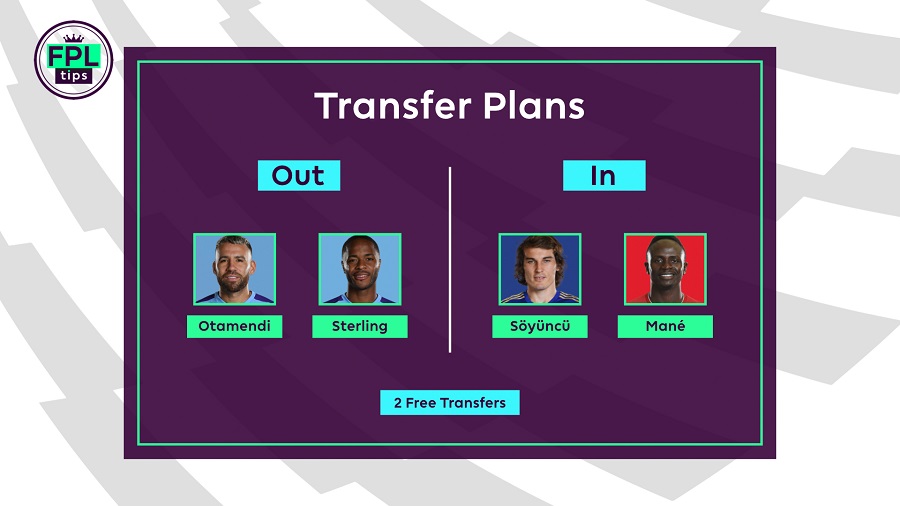 There are likely to be better captain options, at least on paper, over the next 6 Gameweeks, so it makes sense to switch him to a different premium player, with better fixtures.

Mané is of course the replacement in mind, with Brighton, Everton and Watford set to travel to Anfield in the coming weeks.

Here’s how the team is shaping up for Gameweek 12:

Dean Henderson is under consideration as a future goalkeeper target but for now, Nick Pope keeps his place, with a home fixture against West Ham up next.

Burnley have kept clean sheets in 3 of their 5 matches at Turf Moor this season, only conceding to Liverpool and Chelsea.

There’s competition for places amongst the defence, with Rico pushing for a start, after keeping clean sheets in each of the last 3 matches.

But it’s hard to leave out Lundstram, even with an away trip to Spurs up next for the Blades.

No side have conceded fewer goals (8) or kept more clean sheets (5) than Sheffield Utd this season and the 25-year-old ranks 2nd for big chances (4) amongst teammates and top for big chances created (4).

Tomori has kept a clean sheet in each of his last 2 home matches and faces a Crystal Palace side that have scored just 4 goals in the last 4 Gameweeks.

Maddison has 2 goals and 1 assist in the last 4 Gameweeks, averaging 6.5 points per game.

Buendía (11) and Willian (13) are the only midfielders to produce more than his 10 attempted assists during that period.

De Bruyne has matched Maddison’s 10 attempted assists in the last 4 Gameweeks, despite missing a game through injury in that time.

Liverpool have had the 3rd best defence this season in terms of goals conceded, with 9, but only Spurs and Norwich (each 1) have kept fewer than their 2 clean sheets.

Over the last 4 Gameweeks, Mané has amassed 2 goals and 3 assists to average 7.8 points per game.

Mount has struck the target with 5 shots in the last 4 Gameweeks, ranking behind only Mané (6), Pulisic and Salah (each 8) amongst midfielders.

Chelsea face a Crystal Palace side that have failed to keep a clean sheet on the road this season, conceding 9 goals in 5 away matches, which ranks them joint-12th.

Vardy has scored in each of the last 3 Gameweeks now and no player has scored as many as his 10 goals this season.

He’s been afforded 4 big chances in the last 4 Gameweeks; trailing only Wesley and Jesus (each 5) amongst forwards.

Arsenal have kept just 1 clean sheet in the last 10 Gameweeks, conceding an average of 1.5 goals and 2 big chances, per game.

Abraham has matched Vardy for big chances (4) and shots on target (7) in the last 4 Gameweeks, amassing 2 goals and 2 assists in that spell.

Only Jiménez (3) has created more than his 2 big chances during the same period, amongst forwards. 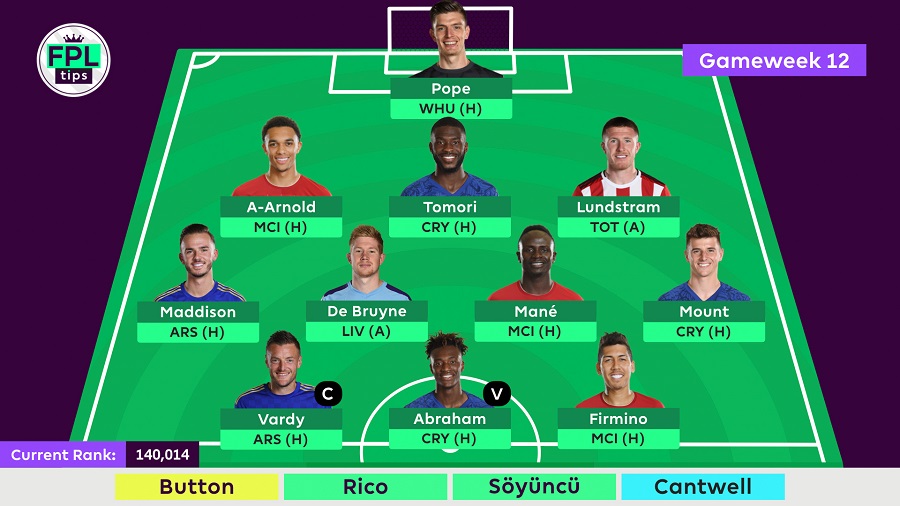 Firmino has been unfortunate to come away without returns in the last 4 Gameweeks, where he’s missed 2 big chances and ranks top amongst forwards with 7 attempted assists.

Only Maupay (16) has fired more than his 13 shots inside the box, across all positions.

The Brazilian boasts an impressive record against Man City, with 4 goals and 4 assists in 8 league appearances against the side.

The top of the table clash between Liverpool and Man City opens up captaincy this Gameweek, with in-form forwards Vardy and Abraham possible contenders.

Only Leicester (14) have scored more goals than Chelsea (11) in the last 4 Gameweeks and they’ve each been afforded 11 big chances in that time.

Vardy has 8 goals in 8 Premier League starts against the Gunners, including 5 in his last 4 outings, so it’s hard to overlook him for the armband.