Chelsea’s Mason Mount has left the team in a straight-swap for team-mate Christian Pulisic ahead of Gameweek 14.

Gameweek 13 saw Pope earn back-to-back clean sheets for the first time this season, while Söyüncü helped Leicester to their 4th shutout in a row.

Maddison thought he’d scored from a penalty rebound but VAR intervened to force a retake due to encroachment in the area.

It was De Bruyne and Mané who got the goals in midfield, with Mason Mount only making an appearance from the bench.

Captain Jamie Vardy had a little bit of good fortune with the penalty retake, after his first attempt had been saved, but no player fired more than his 6 shots inside the box during the Gameweek.

Patience paid off with Firmino, whose late goal earned Liverpool the win over Crystal Palace.

There were 2 free transfers available and a move has already been made, in order to beat the price changes.

Mason Mount has left the team in a straight-swap for teammate Christian Pulisic, who kept his place to earn a 4th consecutive Premier League start against Man City.

It wouldn’t have been possible to make the move after the 0.2 swing in price changes and with another free transfer available and a fairly strong bench to cover, it seemed like a risk worth taking. 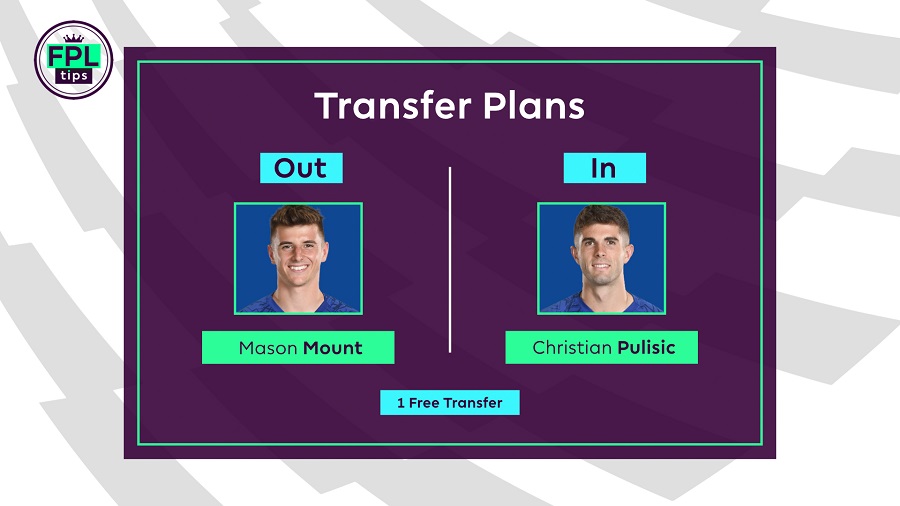 It’s more of a luxury transfer than anything else and I still believe that Mount has a lot to offer as an FPL asset, but there’s no denying that Pulisic has been in the more explosive form of late.

If he can keep his place in the team, Chelsea’s run-in should afford him the chance continue that form.

There’s unlikely to be any further changes this week and here’s how the team is set to lineup for Gameweek 14:

Pope has made a return to FPL form, making an average of 3.5 saves per game in the last 4 Gameweeks.

No side have kept as many as Burnley’s 4 clean sheets during home matches this season, while Crystal Palace have scored just 3 times in the last 5 Gameweeks.

Tomori is pushing for a start, ahead of West Ham’s visit to Stamford Bridge, but it’s hard to make any changes to the current back 3.

Alexander-Arnold has just 1 assist in the last 7 Gameweeks but no player has produced more than his 23 attempted assists during that period.

Söyüncü has to keep his place, with an out-of-form Everton side next to travel to the King Power Stadium.

The Foxes have kept a clean sheet in each of the last 4 Gameweeks, conceding league-low totals of just 2 big chances and 7 shots on target in that time.

Out-of-position hero John Lundstram has fired 11 shots inside the box over the last 4 Gameweeks, ranking comfortably top amongst defenders and behind only Pulisic (12) amongst midfielders.

Sheffield Utd have conceded only 5 goals on the road this season, ranking joint-top with Leicester and Liverpool.

Maddison ranks top amongst midfielders for attempted assists (15) in the last 4 Gameweeks.

He’s up against an Everton that have shipped 20 goals from Gameweek 3 onwards, with only Watford (22), Norwich (23) and Southampton (26) conceding more in that time.

Whilst he’s not quite hitting the heights of his early season form, De Bruyne has ticked over with 4.3 PPG in the last 4 Gameweeks, providing 1 goal and 1 assist.

Newcastle could prove to be a stubborn opponent at St. James’ Park, however, where they’ve allowed just 4 goals in 6 games; only Leicester (3) have fared better during home matches. 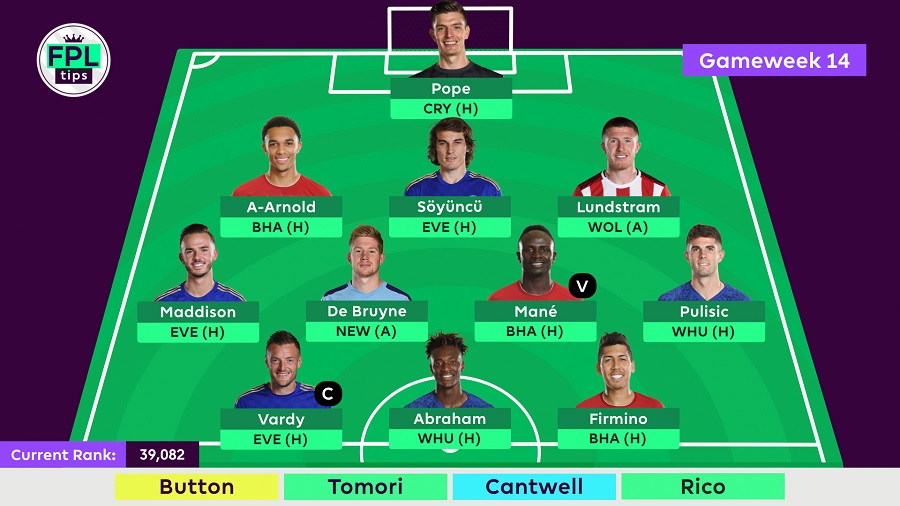 Only Vardy (60) has earned more than his 47 FPL points in the last 6 Gameweeks.

6 teams have shipped more goals than Brighton (7) over the last 4 away matches, but no side have afforded more than the Seagull’s 17 big chances conceded.

The in-form Pulisic completes the midfield, averaging 9.8 PPG in the last 4 Gameweeks thanks to his 5 goals scored.

Only Vardy (12) has fired more than his 10 shots on target during that period.

West Ham have conceded 10 goals in the last 4 Gameweeks, with only Southampton (15) faring worse.

Vardy is the most in-form player in the league, averaging 12.5 PPG in the last 4 Gameweeks, with 6 goals and 3 assists in that time.

He also ranks 1st with tallies of 12 shots on target and 8 big chances, while only Jiménez has fired more shots inside the box (15 to 14).

Abraham has ticked over with 2 goals and 2 assists in the last 4 Gameweeks, though his underlying numbers have regressed.

He’s been afforded 4 big chances during that period, compared to 7 in the previous 4 Gameweeks (GW6-9).

But with home fixtures against West Ham, Aston Villa and Bournemouth coming up, patience with the Chelsea forward could pay off.

Firmino finally put an end to his goal drought last weekend and that will hopefully give him the confidence to take forward into the next 4 fixtures.

Brighton have shipped 8 goals without reply in 3 matches against current top 4 sides this season, conceding an average of 5.3 big chances per game.

The captaincy looks almost 50-50 this Gameweek between two in-form players in Sadio Mané and Jamie Vardy.

As we’ve discussed, the underlying numbers are strong for each of them and both Liverpool and Leicester are in-form and facing teams that currently reside in the bottom half of the table.

With that being said, it could be a week to go with your heart over your head and for that reason, it’s hard to take the armband away from Jamie Vardy.