THREE players from Liverpool feature in FPLtips’ lineup for Merseyside Derby in Gameweek 15.

Clean sheets were hard to come by in Gameweek 14, with Crystal Palace and West Ham the only sides to keep out their opponents.

Alexander-Arnold set up both goals during Liverpool’s win over Brighton, continuing to show his prowess from set pieces.

No player took more shots (6) or created more chances (6) than De Bruyne in Gameweek 14 and the Belgian’s hard work eventually saw him get his goal.

The late transfer to bring in Jiménez somewhat paid off, with the Wolves forward continuing his form to earn an assist, though opting for Danny Ings (9) or even just to field Cantwell (8) from the bench would have proved more effective in the end.

There are a couple of small transfer plans in mind for midweek but with only 1 free transfer available, it may be a good idea to save it for something more pressing later.

With Burnley’s fixtures taking a turn for the worse, one luxury transfer would be to move on Nick Pope.

Sheff Utd have a kind schedule over the next 5 Gameweeks, so Dean Henderson could be an option to replace him.

Alternatively, with Man City struggling to keep up with the title race after dropping points in 2 of their last 3 matches, Kevin De Bruyne could be a possible transfer out.

The Belgian is ticking over but the fixtures are getting worse and there are a variety of midfield options all firing.

Wilfried Zaha is one option, with goals in each of the last 2 Gameweeks and Bournemouth at home up next, while Dele Alli continues to thrive under Mourinho.

The new Spurs boss has made it clear that he sees him as more of a second striker than a midfield player.

But the plan is to resist making either of those moves in order to bank the free transfer and wait for a more pressing move in the future.

Here’s how the team is set to lineup for Gameweek 15:

It’s a tough-looking fixture against Man City for Nick Pope but the Clarets have been resilient at Turf Moor this season.

No side have kept more than their 4 clean sheets in home matches, while only Spurs have conceded fewer big chances (5 to 7).

Everton and Watford have each scored just 4 goals in the last 4 Gameweeks, with only Crystal Palace (3) faring worse.

Newcastle have only managed 6 goals in 7 away matches this season, with no side recording fewer than their 9 big chances; a tally they share with Norwich, Watford and Crystal Palace.

Maddison remains joint-top in the league with a total of 16 attempted assists in the last 4 Gameweeks.

Watford have conceded 15 goals on their travels this campaign, with only Newcastle (16) allowing more.

De Bruyne is the only player to match Maddison for attempted assists in the last 4 Gameweeks (16), while only Mousset (4) and Son (5) have created more big chances than his 3.

Burnley have conceded 9 goals in 3 games against current ‘top four’ teams this season. 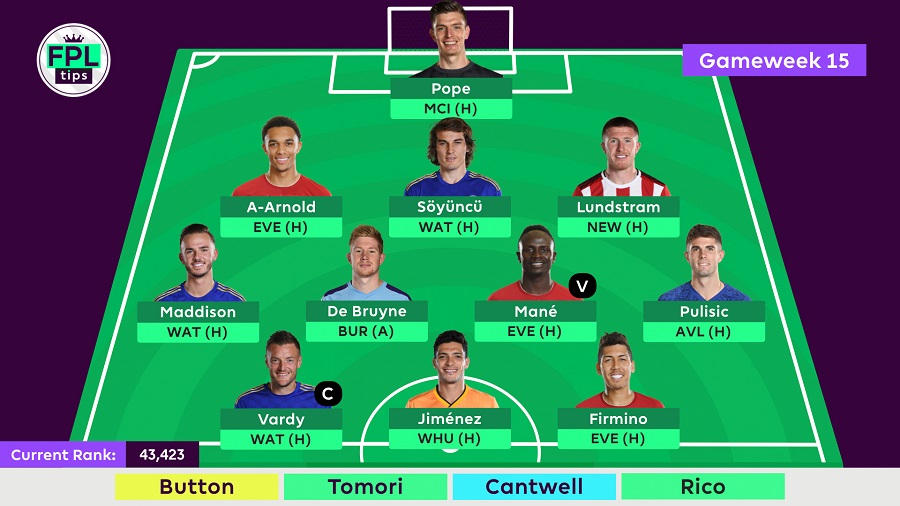 No midfielder has fired more than Mané’s 7 shots on target in the last 4 Gameweeks, while only Pulisic has been afforded more big chances (5 to 4).

Everton have kept just 1 clean sheet in the last 12 Gameweeks, ranking 4th worst in the league with a tally of 22 goals conceded in that time.

Pulisic ranks top amongst midfielders for big chances (5) and shots inside the box (12) in the last 4 Gameweeks, while only Mané has fired more shots on target (7 to 6).

Aston Villa have failed to keep a clean sheet in any of their 7 away matches this season, conceding 15 goals; only Newcastle (16) have fared worse.

Vardy has scored in each of the last 6 Gameweeks, amassing 8 goals and 3 assists in that time.

No player has fired more than his 20 shots inside the box or his 14 efforts on target, during that period, while only Wood (11) can better his 10 big chances.

Jiménez has provided an FPL return in each of the last 4 Gameweeks, earning 3 goals and 1 assist.

He ranks top amongst all players with a tally of 18 shots inside the box, over that spell, while only Vardy can match his 9 shots on target.

Despite keeping the clean sheet against Chelsea, no side conceded more than West Ham’s 5 big chances in Gameweek 14.

Although he’s averaged just 3.8 points per game, Firmino ranks joint-3rd amongst forwards with a tally of 10 shots inside the box in the last 4 Gameweeks.

With Everton, Bournemouth and Watford up next, the Brazilian will get a further chance to redeem himself before almost certainly making way ahead of Gameweek 18.

This looks to be one of the most straight-forward captaincy picks of the season, with Jamie Vardy offering both the form and the fixture. He is currently 2/1 favourite with Betway as of 05th December to win this year’s Premier League golden boot and has netted in every game since Leicester’s 9-0 trouncing of Southampton in October.

Watford are currently without a manager and sit bottom of the table, having conceded 7 goals in the last 4 Gameweeks; only West Ham (9) have allowed more.