Gameweek 1 saw plenty of returns at the back, with Mat Ryan picking up an away clean sheet against Watford, while only Robertson failed to return significant points across the back four.

The two big hitters got the job done in midfield, with a hat-trick for Sterling and a goal and assist from captain Mo Salah.

But the trio of Bournemouth attackers could only muster up an assist between them, following an impressive performance from new boys Sheffield United.

It’s a solid score of 83 points to get the season underway.

The intention is to bank the free transfer but a move to bring in Anthony Martial is tempting, with the FPL midfielder now operating in a no.9 role for Manchester United

But with Wolves away up next, that could be a move to put off until Gameweek 3.

For now, Ryan Fraser is likely to get another chance to impress when Bournemouth travel to Aston Villa.

Here’s how the team is set to line up for Gameweek 2:

The Seagulls restricted Watford to just 4 shots inside the box and didn’t allow them a single big chance.

Mat Ryan now faces 3 home fixtures in the next 4 Gameweeks, starting with a visit from the Hammers in Gameweek 2.

Alexander-Arnold and Robertson face a Southampton side that could only muster up the 1 big chance against Burnley, during a 3-0 defeat, while Lucas Digne will be looking to make it back-to-back clean sheets when Everton host Watford.

Zinchenko is up against Spurs, in a fixture that ended in a 1-0 win for the champions last season.

Man City kept 6 clean sheets in 10 matches against the ‘top six’, conceding an average of 0.5 goals per game.

Premium midfielders Salah and Sterling will both be considered for captaincy once again.

Southampton conceded 8 shots inside the box in Gameweek 1, with only 4 teams allowing more, while Spurs kept just 1 clean sheet from 10 matches against the ‘top six’ last season, conceding 15 goals. 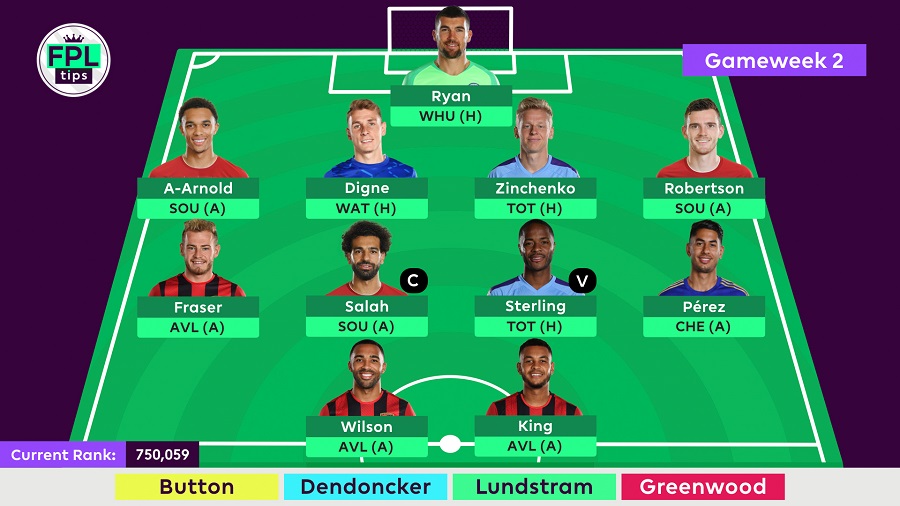 Ayoze Pérez fired just the 1 goal attempt against Wolves but may have more joy against a Chelsea side that shipped 4 goals at Old Trafford; only Bournemouth, Aston Villa (each 4) and West Ham (5) conceded more big chances than the Blues (3) in Gameweek 1.

The Bournemouth attackers (Wilson, King and Fraser) picked up just 1 assist between them in Gameweek 1 but they’ll get a second chance here against Aston Villa.

Although the promoted side were unlucky to suffer defeat late on against Spurs, they allowed a total of 31 goal attempts; 13 more than any other team on opening weekend.

They faced 17 shots from inside the box; 11 more than any other team allowed, while only West Ham (5 to 4) conceded more big chances.

Mo Salah averaged 8.3 points per game against the ‘bottom six’ teams last season and scored in both outings against Southampton, so the armband is set to stay on the Egyptian king.

It’s also wort noting that according to our Gameweek 2 Captain’s Poll, the Liverpool forward is now dominating the poll with over 62% of the total votes

There’s a cool €50,000 for first place prize and the top 1250 places are paid out! What’s even better is there’s still just under 4000 places available still, so you’re not too late to the party.