A mistake from Adrian saw the Liverpool double-up lose their clean sheets, while Lundstram remains firmly routed to the bench with his 14-point return, after netting the only goal in a 1-0 Sheffield United win over Crystal Palace.

Sterling was the only midfielder to provide a return, with Fraser and Salah each missing a big chance.

Keeping faith in the Bournemouth assets wasn’t a complete fail, however, with Callum Wilson earning a penalty for Josh King to convert.

A score of 44 points was around the average and sees barely any movement in overall rank (750k to 755k).

The 2 free transfers have seen Wilson and Fraser make way, ahead of a meeting with Man City in Gameweek 3.

Anthony Martial continued in the no.9 role for United and although Wolves restricted him to just 1 effort at goal, the Frenchman was clinical in finding the back of the net for a second successive Gameweek. 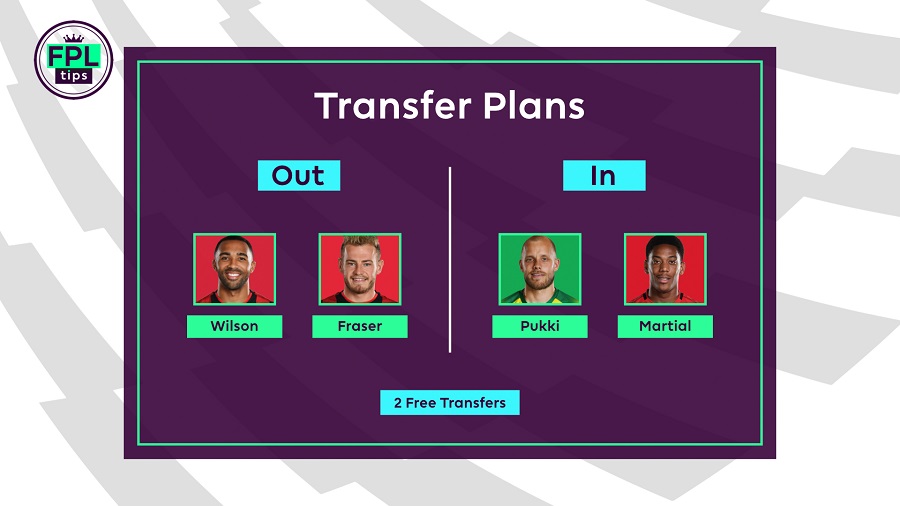 Hat-trick hero Teemu Pukki looks comfortable in making the transition from Championship to Premier League, with only Sterling matching the Finn for goal attempts (10) so far this season.

The fixtures appear favourable from an attacking perspective, with West Ham (6) the only side to concede more goals than Chelsea (5) so far.

Here’s how the team is set to line up for Gameweek 3:

Only Man City (5) have conceded fewer shots inside the box than Brighton (8) during the first two Gameweeks, while only Wolves and Man Utd (each 1, to Brighton’s 2) have allowed opponents fewer big chances.

The back four is looking a little bit shaky for the weekend, with Liverpool yet to keep a clean sheet this season.

They conceded 4 big chances against Southampton, with West Ham (5) the only side to allow opponents more in Gameweek 2.

The Gunners scored 7 goals in away matches against the ‘top six’ last season, at an average of 1.4 per game.

But with fixtures against Burnley and Newcastle to come, it may be worth being patient with the Liverpool fullbacks who proved so reliable last season.

Lucas Digne is rated as a doubt for Friday night’s meeting with Aston Villa, although Marco Silva suggested the left-back’s withdrawal against Watford was more of a precautionary measure than anything too serious.

Zinchenko was suffering from cramp towards the end of the Spurs game but claims “everything is okay” ahead of the trip to Bournemouth.

If either of them are to miss out, the man of the moment John Lundstram will be waiting to come in from the bench.

Raheem Sterling continues to impress, having recorded a total of 5 big chances this season; 2 more than any other player.

Mo Salah is more of a concern, with both Mané and De Bruyne providing tempting alternatives.

The Egyptian averaged 6.0 points per game during home matches against the ‘top six’ last season and scored in a 5-1 win when the Gunners last travelled to Anfield.

Ayozé Perez also faces the chopping block, after failing to impress in the opening Gameweeks.

Sheffield United up next could be a tougher fixture than it first appeared; only 3 teams have allowed opponents fewer shots inside the box (9) so far. 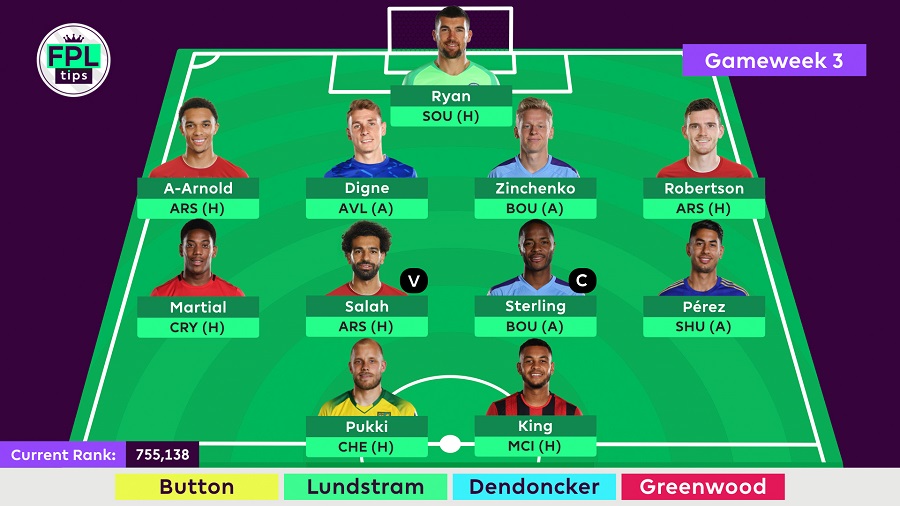 But Leicester grew into the game against Chelsea and Maddison came close to winning it for the Foxes, firing over the bar from close range to deny what would have been an assist for Pérez.

The plan was always to give him the first 4 matches before selling, with the home fixture against Bournemouth in Gameweek 4 offering the most potential for attacking returns, on paper.

The two new additions have home fixtures in Gameweek 3, with Anthony Martial up against a Crystal Palace side that have conceded 17 shots inside the box so far; only 5 teams have allowed opponents more.

Norwich have fired a total of 13 efforts on target this season, ranking joint-2nd in the league; on par with Liverpool and only bettered by Man City (19).

They face a Chelsea side that have given up 5 big chances, with only Bournemouth, Aston Villa (each 6) and West Ham (10) faring worse.

Although appearing unlikely to offer attacking returns against Man City, Josh King remains in the side to avoid taking a 4-point hit.

Ashley Barnes is the target to replace him in a couple of Gameweeks, when Burnley’s fixtures clear up.

On current form, Raheem Sterling is a fairly straight-forward captain choice, from the players available in the team.

He leads the way for both big chances (5) and shots inside the box (10) this season, while only Pukki (7 to 6) has fired more efforts on target.

The Cherries have faced 6 big chances in the opening two matches, with only West Ham (10) allowing opponents more.