Before the international break, Gameweek 4 saw Mat Ryan fail to pick up points in a heavy defeat at Man City but there was a full house of returns across the back four.

Ayoze Pérez was dropped for Leicester’s 3-1 win over Bournemouth, so Dendoncker came in from the bench and it was a rare blank for captain Raheem Sterling, despite the England international playing the full 90 minutes during the 4-0 win over Brighton.

The decision to prioritise bringing Haller in with the free transfer paid off, with the West Ham forward scoring in a 2-0 win over Norwich.

With plans to use the wildcard in Gameweek 6, Ayoze Pérez has made way in favour of a one-week punt.

Callum Robinson is currently rated as a doubt for the weekend after returning early from international duty with a hamstring strain.

Hopefully, that was just precautionary but we’ll know more when Chris Wilder gives his press conference later in the week. 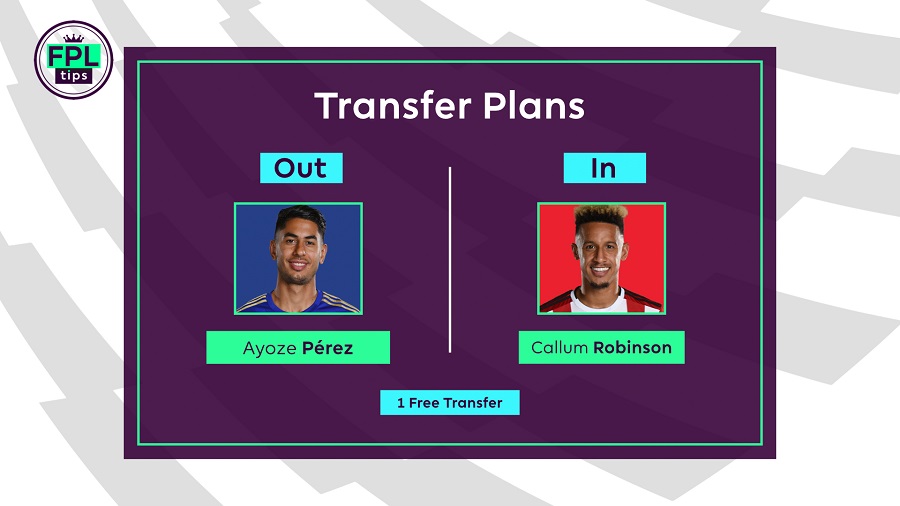 Unfortunately, that means it will be another week of hiding behind the sofa when Kevin De Bruyne plays.

The Belgian has been in incredible form for club and country and will be one of the first names in the team when the wildcard is activated ahead of Gameweek 6.

Here’s how the team is set to line up for Gameweek 5:

Nick Pope is likely to come into the team soon but Mat Ryan will get one final run out this weekend, ahead of the meeting with Burnley.

Brighton rank joint-6th best for shots inside the box conceded (24) so far this season, while Burnley are only ahead of 3 teams for big chances (6).

With Mendy fit and training, Zinchenko’s days could be numbered but hopefully the Ukrainian retains his place against Norwich on Saturday.

Robertson is likely to leave the team when the wildcard is played but it will be a double-up on Liverpool defence for one last time when the Reds host Newcastle.

Only Leicester (4) have faced fewer shots on target than Liverpool (5) in the last 2 Gameweeks, while Man City (18) and Everton (20) rank 1st and 2nd for shots inside the box conceded this season.

We’re still awaiting an official update from Solskjaer but the Mirror report that Anthony Martial is expected to be available for Leicester’s visit to Old Trafford.

If the Frenchman remains sidelined, Sheffield United’s John Lundstram provides an alternative option on the bench, ahead of a home fixture against Southampton.

There’ll be the option to re-think the premium options when the wildcard is used but for now, Salah and Sterling retain their places as the big hitters in the team.

The pair rank joint-1st with a tally of 6 big chances this season, while only Pukki (13) has fired more than their 12 shots inside the box apiece.

Callum Robinson has operated in a striker role for Sheffield United in the opening 4 Gameweeks, after completing a move from Preston North End this summer.

He netted 12 goals in 27 appearances in the Championship last season, while only Pukki (1.3), Maupay and Abraham (each 1.5) produced more than his 1.2 efforts on target per game.

Pukki netted twice from the penalty spot for Finland over the international break, continuing his impressive start to the season.

He ranks 1st in the league with tallies of 13 shots inside the box and 11 efforts on target, during the opening 4 Gameweeks.

But if everyone is fit and available, it could perhaps be an option to bench the Norwich forward in favour of Lundstram, given the fixture. 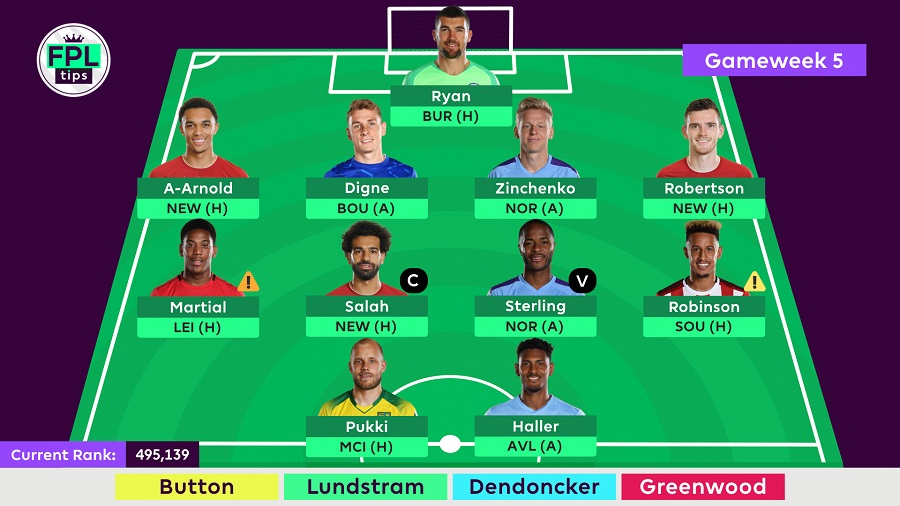 Haller has the highest expect goals figure in the league (2.89) so far this season, despite facing Man City in Gameweek 1 and missing Gameweek 2 through injury.

The West Ham forward has netted 3 goals in the last 2 Gameweeks and ranks joint-1st for shots inside the box (8) and on target (5) during that period.

Salah and Sterling make up the key contenders for captaincy once again and it will be the Egyptian who gets the nod on this occasion.

The thinking here is that while Sterling has been away on international duty with England, Salah should be well-rested ahead of Newcastle’s visit to Anfield.

The Liverpool midfielder averaged 8.4 points per game during home matches against teams outside the ‘top six’ last season, compared to Sterling’s 5.5 PPG in away matches against those sides.