FPLTips have activated their Fantasy Premier League Wildcard ahead of Gameweek 6, but where are the Liverpool players?

Gameweek 5 saw a lack of clean sheets once again and despite ranking 1st and 2nd in terms of expected goals conceded, Liverpool and Brighton each shipped a goal.

Alexander-Arnold produced 7 attempted assists against Newcastle but it was Robertson who came away with the assist on this occasion.

A late captaincy swap saw Sterling take the armband instead of Salah, against an injury-stricken Norwich side.

But despite firing 6 goal attempts, including 1 against the woodwork and producing 4 attempted assists, 2 of which led to big chances, the Man City midfielder was unable to return points.

Haller was unable to continue his impressive form against a stubborn Villa defence but Pukki found his 6th goal of the season in the incredible 3-2 win over Man City.

A score of 40 points was a fair way below the Fantasy Premier League average and sees a huge fall in rank down from 495K to 1.2M.

The wildcard is active ahead of Gameweek 6 and here’s how the latest draft is shaping up:

Nick Pope comes in ahead of a kind schedule for Burnley; they face only Chelsea from last season’s ‘top six’ in their next 9 matches.

Only Leicester and Man Utd (each 5) have allowed opponents fewer big chances than the Clarets (6) this season.

Alexander-Arnold and Digne have been by far the most creative defenders this season, leading the way for attempted assists (21 & 12) and successful crosses (12 & 10) and as such, both are set to keep their places in the team.

The Liverpool right-back has produced an average of 4.2 attempted assists per game; more than any other Premier League player.

Alongside them, there could be a place for Aurier, who impressed on his return from injury in the 4-0 win over Crystal Palace last Gameweek.

Whilst his starting place is far from secure, the 26-year-old has vowed to take his chance and prove himself in face of competition from Walker-Peters and Foyth.

A favourable schedule could make him a decent punt; Spurs host Southampton and Watford in the next 4 Gameweeks.

Heung-Min Son also comes into the reckoning as a potential downgrade from Mo Salah, with the intention of using those funds to accommodate three strong forwards in a classic 3-4-3 formation.

Whilst the Egyptian has done little to warrant selling, Liverpool face 4 of last season’s ‘top six’ in the next 7 Gameweeks, which lessens his appeal as a captaincy option.

Son has returned 2 goals and an assist since his return from suspension in Gameweek 3 and no midfielder has fired more than his 7 shots on target across those last 3 matches.

Despite consecutive blanks against Brighton and Norwich, Sterling keeps his place in the team due to promising underlying numbers and a favourable schedule for Man City.

He ranks joint-top with Agüero for shots inside the box this season (17), while only Rashford (3.66 to 3.21) has a higher expected goals figure.

No player has created more big chances than Kevin De Bruyne (6) this season and the Belgian finally makes his way into the team, following his rest in Gameweek 5.

Mason Mount netted his 3rd goal of the season during Chelsea’s 5-2 win over Wolves and he ranks joint-2nd in the league with a tally of 8 shots on target.

It’s a tough fixture up next for Lampard’s side but after Liverpool, they face just one ‘top six’ opponent in the following 11 Gameweeks.

UPDATE: since publishing this article and video, Mason Mount went off injured in the 16th minute of Chelsea’s Champions League Group Stage match against Valencia on Tuesday evening.

We will monitor news of his injury closely this week and make a change to our wildcard team if forced to do so.

Teemu Pukki keeps his place amongst the forwards, returning an incredible average of 9.8 points per game so far.

His total of 12 efforts on target is 4 more than any other player has managed, while only Sterling and Agüero have fired more shots inside the box.

There’s also a place for hat-trick hero Tammy Abraham, who ranks joint-top with Agüero for goals scored so far.

He showed a variety of finishes with 3 very different goals against Wolves; Lampard described them as “a messy one, a good header and a fantastic-feet-and-finish goal.” 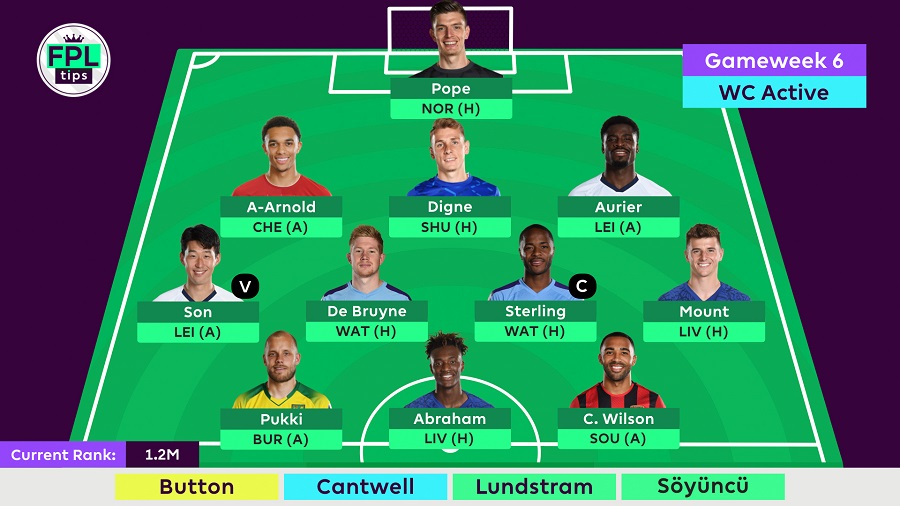 Callum Wilson completes this wildcard draft, with the Bournemouth forward continuing to tick over with FPL returns, averaging 6.6 points per game.

He may have only taken 6 shots this season but they’ve all been from inside the box and 5 have been deemed big chances.

Only Deulofeu (12) has produced more than his 9 attempted assists amongst forwards.

The next 4 Gameweeks look promising for the Cherries from an attacking perspective, with trips to Southampton and Arsenal and home fixtures against West Ham and Norwich.

Norwich midfielder Cantwell comes in as cover on the bench, for now, though it could be an option to utilise him in the starting XI in the near future.

Getting Salah back in down the line (at the expense of either Son, Sterling or De Bruyne) could be done by downgrading one of the forwards to Greenwood and promoting Cantwell.

Lundstram keeps his place as a rotation option in defence, alongside Leicester’s Söyüncü.

The Foxes have conceded the joint-fewest big chances this season and have some favourable fixtures on the horizon.

One of the main reasons for going without Salah in this draft is due to captaincy and the plan will be to instead rely on Sterling and perhaps even Heung-Min Son in the near future.

A captaincy rotation between these two would include the following home fixtures over the next 8 Gameweeks:

We saw an improved Watford side against Arsenal, after the change in management but Man City will be looking to bounce back from the defeat to Norwich.