FPLtips have locked their Fantasy Premier League team in for Gameweek, and it’s Tottenham’s Heung-Min Son who will wear the captains armband

The wildcard was used to good effect in Gameweek 6, with Pope coming in for Burnley’s 2-0 win over Norwich and attacking returns from Alexander-Arnold and Otamendi in defence.

Sterling was an unused sub for Man City’s incredible 8-0 win over Watford, which saw De Bruyne take over the captaincy in a huge stroke of good fortune.

But Mount returned from his knock to keep Lundstram on the bench, with his assist and clean sheet in a 2-0 away win at Everton.

Callum Wilson earned the points upfront, with a slightly fortunate 4th goal of the season, after Gunn and Bednarek got in each other’s way and allowed him a free run at goal.

There’s a temptation to move Lucas Digne on with the free transfer, with Aurier and Söyüncü looking like viable alternatives.

But having only just used the wildcard, the plan is to avoid making a move in order to remain flexible with 2 free transfers available for the following Gameweek.

Burnley have allowed opponents only 7 big chances in 6 matches this season; on par with Leicester and only bettered by Man Utd (5).

Their opponents Aston Villa have scored 6 goals and only 3 teams have been afforded fewer than their 10 big chances.

Alexander-Arnold and Otamendi will keep their places, but Digne could move to the bench.

Despite keeping only 1 clean sheet, no side have conceded fewer goals (5) or faced fewer shots on target (16) than Liverpool this season.

The Reds face a Sheffield United side that have taken the fewest goal attempts in the league (57).

Man City have only conceded 28 shots inside the box so far, the lowest in the league, and face an Everton side that have scored just 5 goals.

Only Brighton (18) and Sheff Utd (15) have fired less efforts on target than the Toffees (19) this season.

With Man City in such impressive goal-scoring form and the clear odds-on favourites with most bookmakers to win his game, it could be worth giving a start to Diego Rico ahead of Digne.

The Bournemouth left-back has earned starts in the last 2 Gameweeks, recording an assist in each and no defender has created more big chances (2) in that time.

No midfielder has fired more efforts on target than Heung-Min Son (7) in the last 4 Gameweeks, while only Salah has taken more shots inside the box (12 to 10).

Although Southampton have only shipped 4 goals in the last 4 Gameweeks, they’ve allowed opponents 9 big chances; just 6 teams have fared worse.

A well-rested Sterling will keep his place alongside De Bruyne for the trip to Goodison Park.

Everton started the season well but they’ve shipped 9 goals in the last 4 Gameweeks; only Wolves (10) and Watford (14) have conceded more.

Mount completes the midfield, ahead of Brighton’s visit to Stamford Bridge.

Only Salah (5 to 3) has had more big chances in the last 4 Gameweeks, amongst midfielders, while only Lanzini and Milivojevic have taken more successful corners (5).

The Seagulls rank 13th in the league with their total of 7 goals conceded in that time.

5 forwards have been directly involved in more goals than Pukki (4) in the last 4 Gameweeks but only Deulofeu (8) and Abraham (9) have fired more than his 7 shots on target.

No side have attempted fewer shots than Norwich in that period but only 4 teams have a better goal conversion rate (15.6%).

Abraham leads the way for shots on target (9) in the last 4 Gameweeks, while only Agüero has taken more shots inside the box (20 to 14) or been afforded more big chances (10 to 7).

Chelsea have scored 11 goals from 13 big chances in the last 4 Gameweeks; only Liverpool and Man City have fared better for each. 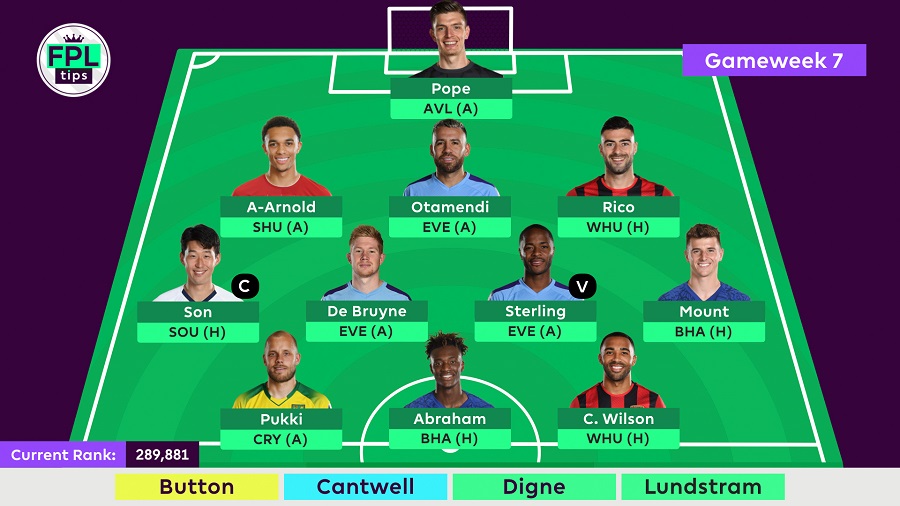 Callum Wilson completes the team, ahead of West Ham’s visit to the Vitality Stadium.

West Ham have tightened up defensively, keeping a clean sheet in each of their last 3 matches.

But despite conceding only 2 goals on the road this season, the Hammers have allowed opponents 10 big chances; only Watford have fared worse in that respect.

Although Man City’s form in-front of goal has been impressive, it’s tempting to move away from Sterling as the captaincy option this Gameweek.

Everton haven’t conceded a great quantity of shots in the last 4 Gameweeks (30).

Only Man City themselves have allowed opponents fewer in total (28), while only Man Utd (16) have faced fewer efforts from inside the box (19).

Abraham and Son are both in-form with favourable home fixtures in Gameweek 7, facing Brighton and Southampton, respectively.

Although Saints have shipped fewer goals in the last 4 Gameweeks (4 to 7), they’ve conceded 9 big chances; one more than Brighton have allowed.

Since his return in Gameweek 3, Son has operated as the furthest man forward for Spurs, taking 33 touches in the oppositions’ penalty box, compared to just 20 for Kane.

For those reasons, it’s the South Korean who wears the armband.