There were very few points at the back in Gameweek 7, with the only return coming from an Alexander-Arnold clean sheet against Sheffield United.

Rico was unfortunate to come away without any points at all, having created the most chances of any player during the Gameweek (6).

Attacking returns from each of the 4 midfielders helped to salvage things but captain Heung-Min Son was hindered somewhat by the early red card to Serge Aurier.

No player had as many as Abraham’s 4 big chances in Gameweek 7 but the Chelsea forward was unable to beat Mat Ryan, leaving Callum Wilson to deliver the only points upfront for a second successive Gameweek.

Please note that all player prices, injury status’ and ownership percentages were correct at the time or writing and recording this video and article.

There are 2 free transfers available for Gameweek 8 but as things stand, it’s hard to find a way to use them.

Aubameyang is very much in the thinking but it’s hard to sell any of the current forwards to accommodate him.

Callum Wilson hasn’t put a foot wrong, Abraham has continued to look lively despite failing to score in the last couple of Gameweeks and Pukki has some favourable fixtures to come, starting with Aston Villa at home this weekend.

That move would also involve selling Heung-Min Son and promoting Cantwell into the starting XI.

Another possibility would be to downgrade Lucas Digne ahead of the trip to Burnley, with the intention of promoting Lundstram into the XI.

But the left-back returned 29 points in his 2 games against the Clarets last season, producing 2 goals, 1 assist and a clean sheet.

For now, the plan is to wait until as close to the deadline as possible, to see if any late injuries or rotation risks pop up after the midweek matches.

Kevin De Bruyne is reported to have a groin problem but how serious that is remains to be seen.

If the Belgian is set for a spell on the sidelines, it could be worth considering a swap to the in-form Riyad Mahrez.

Here’s a look at how the team is currently shaping up for Gameweek 8:

Neither Everton nor Burnley have been particularly prolific in front of goal of late, with just 5 goals apiece in the last 4 Gameweeks.

Pope has averaged 5.3 points per game at home this season, keeping 2 clean sheets in 3 matches and only conceding to Liverpool.

It could be a return for the 3 premiums in defence, with Rico moving back to the bench in favour of Digne.

Everton have shipped 5 goals in 3 away matches this season but only Man Utd (13 to 17) have faced fewer shots inside the box on the road.

Liverpool have allowed opponents just 3 big chances at Anfield this season; only Man City (2) have fared better in home matches, in that respect.  So both Alexander-Arnold and Otamendi will keep their places.

Son has returned 2 goals and 3 assists in the last 4 Gameweeks, with only De Bruyne and Agüero (7) directly contributing to more goals.

Brighton have shipped 7 goals in the last 4 Gameweeks and only Sheffield United (13) and Watford (15) have conceded more big chances (11) in that time.

There’s likely to be a double-up on Man City midfielders in some form, whether that’s with Sterling and De Bruyne or potentially Mahrez, if the latter fails to recover from his groin issue.

Wolves, Aston Villa and Southampton are set to visit the Etihad in the next 4 Gameweeks.

Mount completes the midfield ahead of Chelsea’s trip to Southampton, having returned 4 goal involvements (3 goals, 1 assist) in the last 6 Gameweeks.

The Blues rank 2nd only to Man City for both goals scored (10) and big chances (18) in the last 4 Gameweeks.

Norwich have struggled on the road this season but Pukki has 5 goals and 2 assists in the 3 games at Carrow Road.

No player has scored more goals or fired more than his 9 shots on target during home matches.

Villa are yet to record an away clean sheet this season, shipping 7 goals in 3 games.

He may have failed to score in his last 2 outings but Abraham has racked up some very impressive underlying numbers.

Only Agüero (17) has taken more than his 16 shots inside the box in the last 4 Gameweeks, while no player has been afforded more than his 10 big chances. 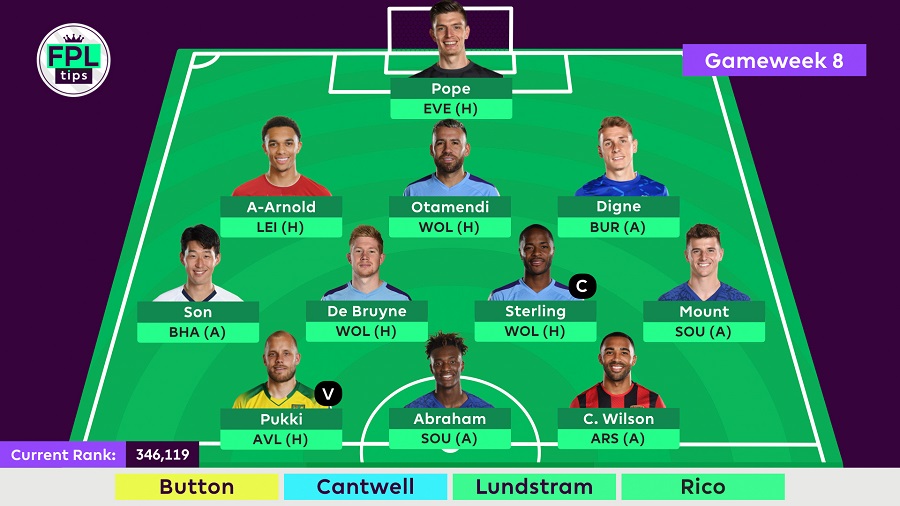 Southampton have failed to keep a clean sheet in any of their 3 home matches this season, shipping 6 goals.

Callum Wilson is likely to remain in the team, despite the temptation to move him on for Aubameyang.

He’s returned points in every Gameweek so far and found the back of the net in each of his last 4 outings.

Only Mahrez (9) and Abraham (10) have fired more than his 8 efforts on target in the last 4 Gameweeks and the Chelsea forward is also the only player to have been afforded more big chances (10 to 7).

In the absence of the Arsenal talisman upfront, it’s likely to be a Man City midfielder who takes the armband and with doubts over De Bruyne’s fitness, Raheem Sterling looks like the man for the job.

Wolves are away in Turkey for their Thursday night Europa League match, while Man City have a home Champions League tie two days earlier.

Sterling averaged 9.2 points per game at home against teams outside of the ‘top six’ last season.