Before the international break, Gameweek 8 saw Nick Pope keep his 3rd clean sheet of the season in Burnley’s 1-0 win over Everton, while Lundstram helped Sheffield United hold Watford to a 0-0 draw.

The decision to hold onto De Bruyne and allow Cantwell to come in from the bench worked out well in a way, since Mahrez also blanked and bringing him in for the one game would have tied up 2 transfers.

Tammy Abraham fired the only goal amongst the forwards, as Chelsea put 4 past Southampton.

There are 2 free transfers to use and Aubameyang and Maddison are the main targets to bring in.

Pukki and Son were potentially going to be the players to make way for those two but the price changes over international break mean those moves are no longer affordable.

So instead, it might be worth looking to spend 1 transfer freeing up cash this Gameweek, before making those 2 moves the following Gameweek.

At the moment, it’s looking like Otamendi may reluctantly have to be the one to go, with a Villa defender such as Mings or Guilbert potentially coming in.

The logic there would be that it frees up the necessary cash for next Gameweek’s moves and they’d rotate well with Tomori and Lundstram.

It’s tough to get rid of a Man City player before their next 3 fixtures but with Stones back in training now and Otamendi’s poor performances of late, there could be a slight chance of him losing his place.

No transfer has been made as of yet, so we can wait and see what news the rest of the week brings before deciding.

Here’s how the team is shaping up for Gameweek 9:

Nick Pope faces a Leicester side that have been in goal scoring form of late, so a clean sheet looks unlikely here.

The Foxes have scored 11 goals in the last 5 Gameweeks, with only Chelsea (14) and Man City (17) faring better.

Burnley are yet to keep a clean sheet on the road this season but they’ve only conceded 5 big chances in 4 away matches, with Man Utd (2) the only side to allow fewer.

Alexander-Arnold faces a United side that have only scored 5 league goals since Gameweek 2, with only Watford (4) faring worse.

Tomori came in with a free transfer last Gameweek, with the intention of bringing him into the XI for Newcastle’s visit to Stamford Bridge.

The Magpies have only scored 3 goals on the road this season and no side have had fewer than their 3 big chances during away matches.

A home fixture against Watford could be a good chance for Son to get returns if he gets the gametime, but there’s always a chance of him being named on the bench following an international break.

The Hornets have the worst away record in the league this season, having conceded 12 goals and 15 big chances in 4 matches.

De Bruyne returned to training on Monday and looks set for a return to action this weekend when City travel to Crystal Palace.

The Eagles have only shipped 1 goal during their 4 home matches so far but have allowed opponents 6 big chances.

Mason Mount comes into the game with Newcastle in good form, having scored and assisted across his last 2 league outings.

Only Sadio Mané (5) has had more than his 4 big chances during the last 4 Gameweeks, amongst midfielders.

Despite his recent dry spell, Pukki has been afforded 3 big chances in the last 4 Gameweeks; the same number as in the first 4 Gameweeks.

The Cherries are yet to keep a clean sheet this season and have allowed 7 goals across their 4 home matches, while Norwich themselves are the only side to concede more big chances than Bournemouth at home (14 to 12).

Abraham has matched Agüero’s 7 big chances in the last 4 Gameweeks and no player has been afforded more than the pair. 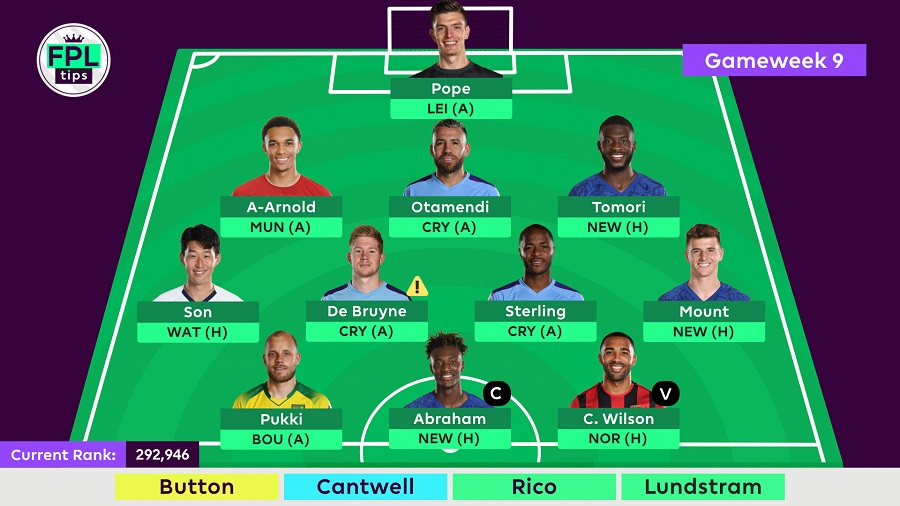 13 shots inside the box by the Chelsea forward, during that period, can only be bettered by the Argentine (16).

Callum Wilson has scored 4 goals in the last 4 Gameweeks; ranking joint-top with Abraham and Aubameyang.

He faces a Norwich side that have shipped a league-low total of 21 goals this season, while only West Ham (26) have conceded more big chances than the Canaries’ 24.

With Sterling having scored just once in the last 5 Gameweeks and Crystal Palace having shipped just 1 goal at home this season, it’s tempting to look elsewhere for captaincy.

Callum Wilson and Tammy Abraham are the main contenders, with home fixtures against Norwich and Newcastle, respectively.

There isn’t much between the pair and it does feel a little bit like a coin toss but for now, the armband is with the Chelsea forward.

Only Man City (20) have scored more goals than Chelsea’s 17 in the last 6 Gameweeks, with Bournemouth having managed 10 goals in that period.