All eyes are on the Fantasy Premier League Double Gameweek 22 fixture schedule this week, but which players will be targeting…

After a week-long break from Premier League action, the Watchlist series is back to identify players who have caught the eye, based on recent performances and upcoming fixtures.

In the current climate – it’s worth holding off from making transfers until as close to Friday’s Double Gameweek 22 deadline as possible.

As always, we have provided you with both a video and written version of our Dpouble Gameweek 22 Watchlist preview.

Please note: all player prices and ownership stats were correct at the time of recording and publishing. 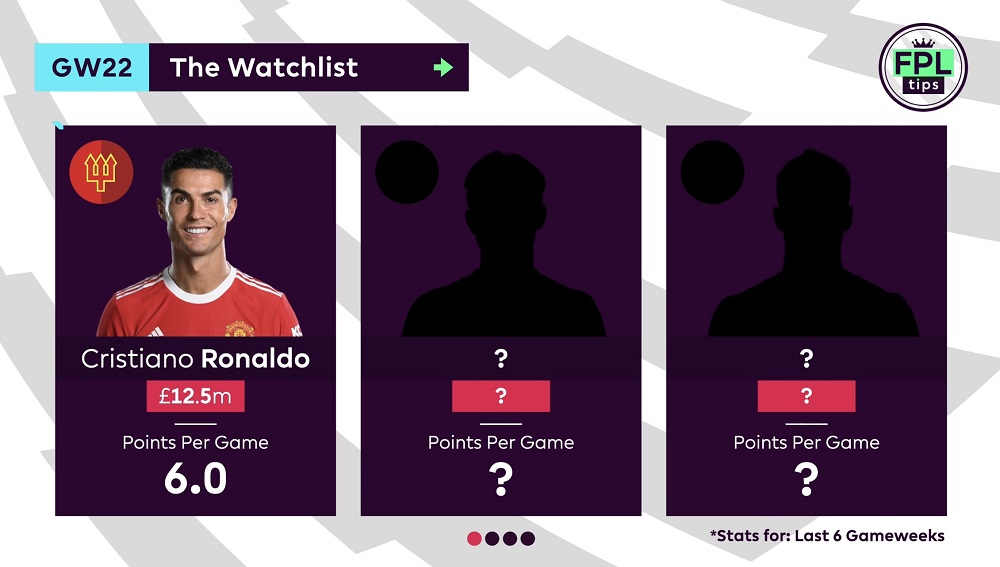 With Heung-Min Son now set to miss out through injury, Cristiano Ronaldo and Harry Kane are left as the two standout premium options for Double Gameweek 22.

Whilst Man Utd as a team have been hit and miss, the Portuguese superstar has been directly involved in five goals over their last six matches; averaging 6.5 points per game.

Only Harry Kane has taken more shots in that time (23 to 19) and the pair rank joint-second for shots in the box – with 15; just trailing Odsonne Edouard – with 16.

United’s first opponents in Double Gameweek 22 are an Aston Villa side that have kept just one clean sheet in their last six matches.

Next up is Brentford – who have failed to keep a clean sheet in their last six matches, conceding nine big chances. 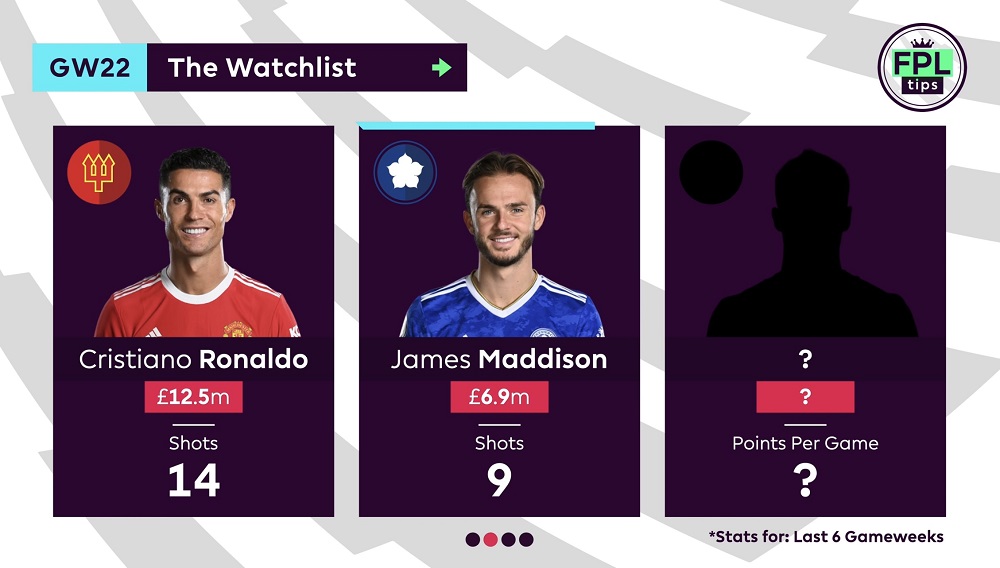 There could be doubts over Leicester’s involvement in Double Gameweek 22 after they had a request accepted to postpone their rescheduled match against Everton.

The Foxes reportedly have just eight senior outfield players available and are set to face Burnley in five days’ time.

But if the match does look set to go ahead, James Maddison will be a popular midfield target having made a return to action – and a return to the scoresheet – in a 4-1 FA Cup win over Watford this weekend.

The Englishman has notched an impressive four goals and five assists in his last six league outings, to average 9.3 points per game.

Across each player’s respective last six matches, only Salah (23), Kane and Ronaldo (each 25) have fired more than Maddison’s 21 shots.

Meanwhile, Son (10), Sterling and Kane (each 11) are the only players to land more than his nine efforts on target.

Just five midfielders can better his tally of 12 attempted assists. 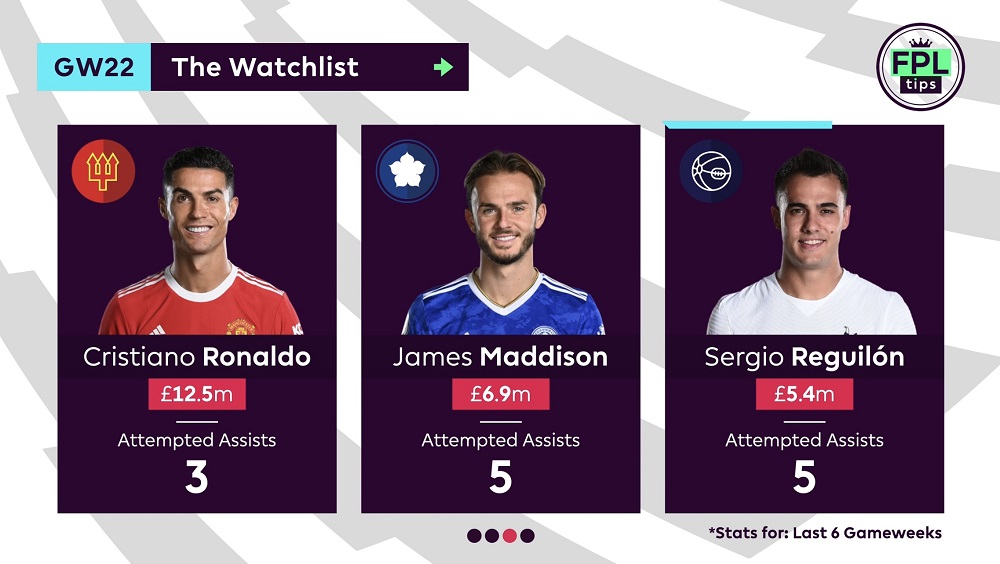 Sergio Reguilon remains a key target after helping Spurs to a clean sheet against Watford in their last Premier League outing.

But the Spaniard didn’t feature in either of their two recent cup matches – against Chelsea or Morecambe – hopefully his absence was just precautionary, having only recently returned from injury.

Either way, rotation is certainly a concern.

Tottenham have four crucial matches in all competitions in the space of just 11 days, facing Chelsea twice, either side of their Double Gameweek 22 fixtures against Arsenal and Leicester.

But they have been one of the league’s strongest defences under Antonio Conte, keeping five clean sheets in eight matches.

Across each team’s respective last six matches, only Man City and Wolves can match their tally of four clean sheets.

They’ve conceded a league-low two big chances in that time; four fewer than any other side.

BEFORE YOU GO… Our friends at FanTeam are offering a £100,000 Second Chance Fantasy Premier League season game with a mouth-watering £20,000 first place prize! And best of all, it’s FREE to play.

You don’t need to deposit any funds either. All you need to do is register an account and you can enter for free, for a chance at winning £20,000. If you already have an account then that’s even easier, as you’ll have a free ticket already credited to your FanTeam account.

The Second Chance Season game starts this Friday (Gameweek 22) and runs until the end of the season, so be sure to act fact, create your FREE account here and enter, a team, for FREE!

The game is strictly 18+ only so please only attempt to register and play if you’re legally eligible. 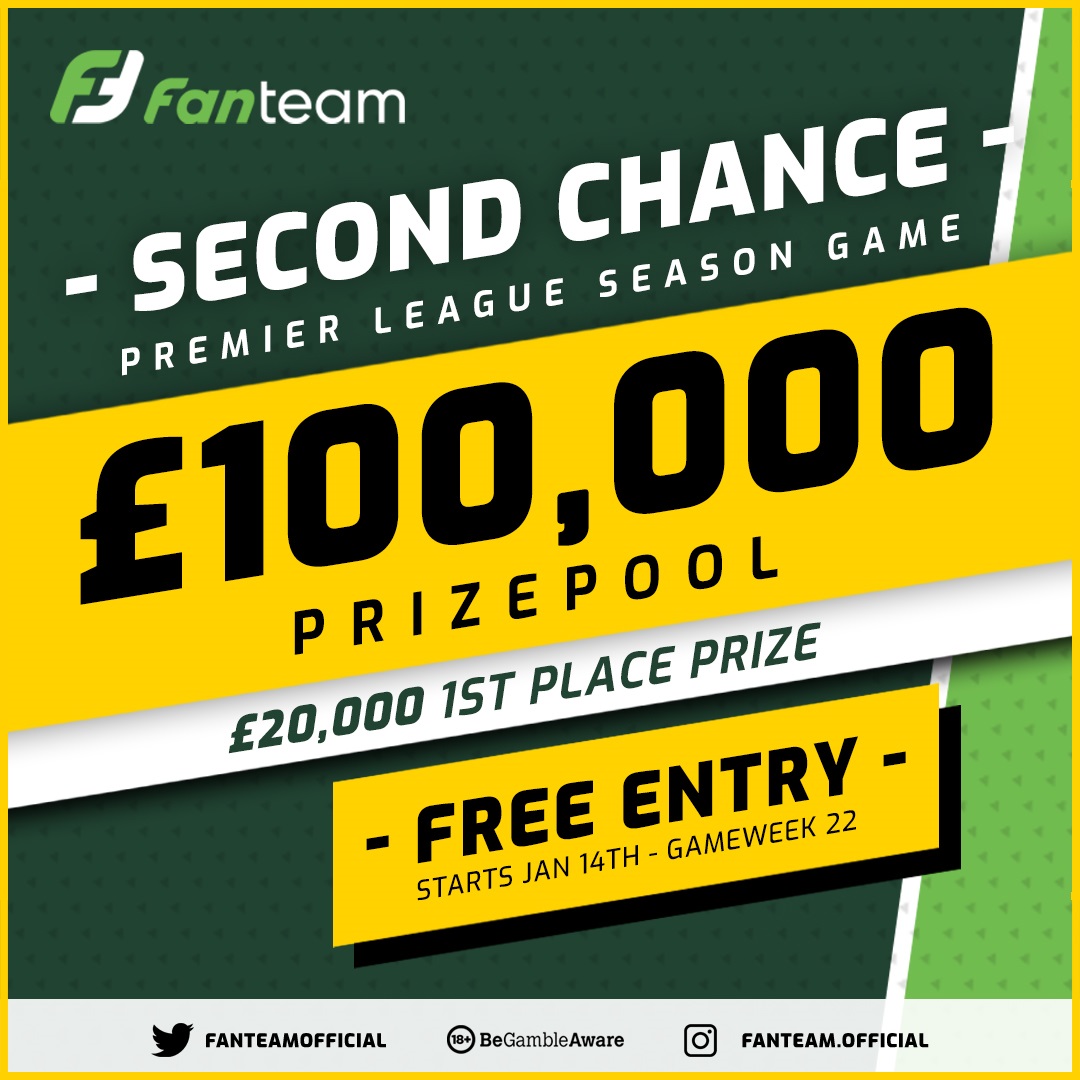