Chelsea’s new signing Romelu Lukaku got off to a dream start against Arsenal in Gameweek 2, but should Fantasy Premier League bosses look to bring him in so soon?

The Watchlist series is back to identify some key players who caught the eye in Gameweek 2, ahead of the upcoming Fantasy Premier League schedule.

Here are three future transfer targets ahead of Gameweek 3 for both the @FFPundits and @_FPLTips teams.

As always, we have provided you with both a video and written version of our Gameweek 3 Watchlist preview. 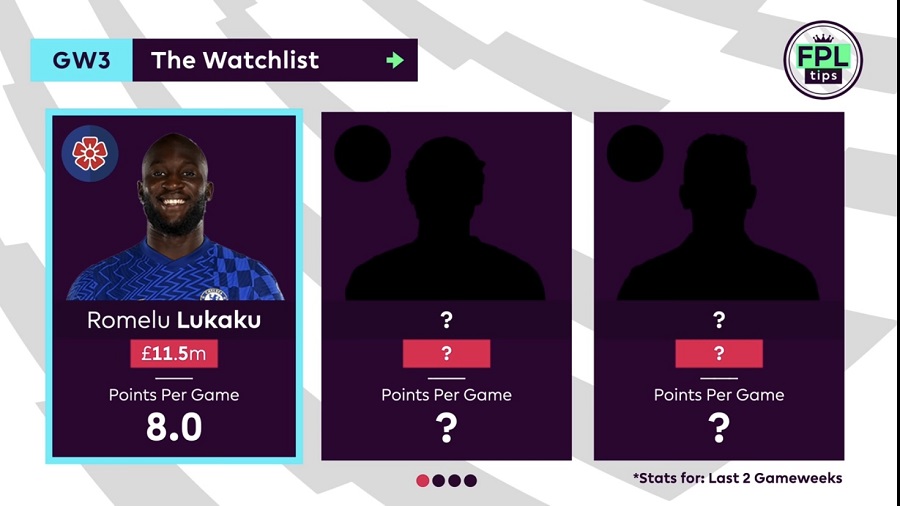 Romelu Lukaku made a dream start to his Premier League return, opening the scoring against Arsenal just 15 minutes into his second Chelsea debut, after Reece James picked him out for a tap-in.

Tallies of 8 total shots and 7 inside the box are both more than any other player has managed in Gameweek 2 so far, while only Mané, Calvert-Lewin and Havertz have equalled his 2 big chances.

Enjoying a strong all-round game, the Belgian also created one of the big chances missed by Kai Havertz and completed 19 out of his 20 passes.

But as good as Lukaku – and Chelsea, as a team – were against the Gunners, fixtures against Liverpool, Spurs and Man City in the next 4 Gameweeks mean I’m still leaning towards holding off from investment until their fixture swing.

From Gameweek 7 onwards, they have five consecutive matches against teams rated as a 2 on the FDR – including home meetings with Southampton, Norwich and Burnley – making that a good time to consider using the first Wildcard. 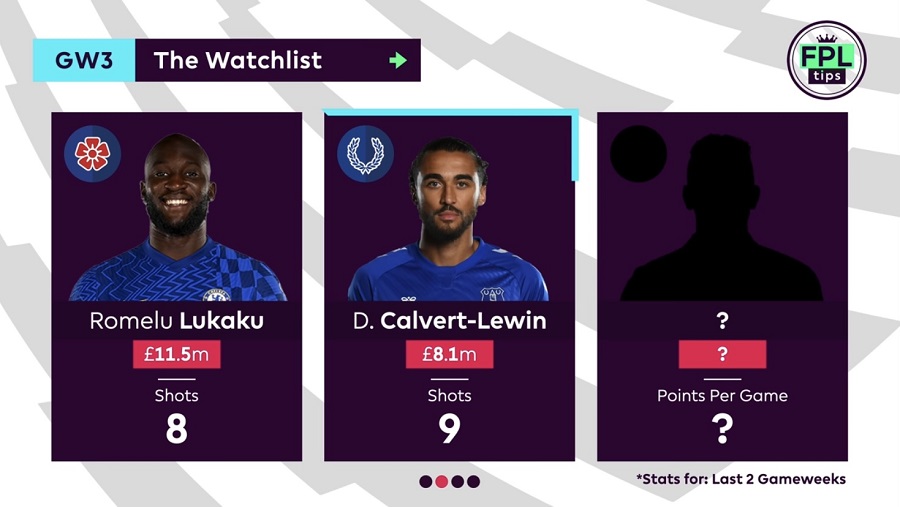 Everton’s unbeaten start to the season continued with a 2-2 draw against Leeds, as Dominic Calvert-Lewin made it 2 in 2; converting a penalty he’d won himself.

No player has taken more than his 4 efforts on target during the Gameweek so far, with only Mané able to match that tally.

The Englishman leads the way for shots on target (6), shots inside the box (9) and expected goals (2.07) across the opening two matches combined.

Rafa Benitez looks to be playing to Calvert-Lewin’s strengths, with Everton ranking amongst the top five teams for successful crosses (12) so far.

The addition of penalty duties can help him surpass his 2020/21 season tally of 16 goals.

With good fixtures remaining for the Toffees over the next 4 Gameweeks – including Burnley, Aston Villa and Norwich – a swap from Danny Ings could be on the cards for Gameweek 4, when his fixtures take a turn for the worse. 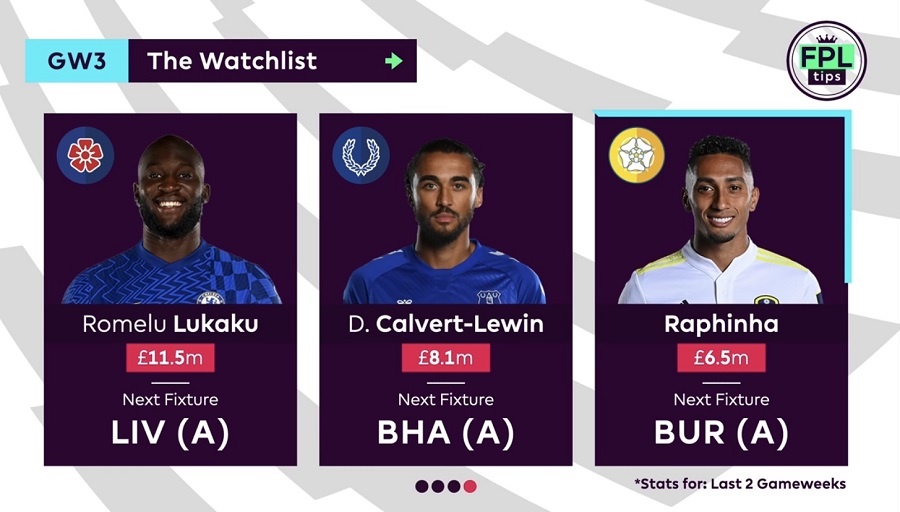 Popular pre-season target Raphinha produced a moment of magic to equalise against Everton, curling his effort beyond the reach of Jordan Pickford.

It only seemed a matter of time before he opened his account for the new season, after registering 2 big chance involvements against Man Utd on opening weekend.

Amongst midfielders, he ranks joint-top with Sadio Mané for shots during Gameweek 2 so far – each on 6.

No teammate can better his 8 shots or his 0.56 expected goals (xG) figure, across both matches.

Leeds face just one ‘big six’ side between now and Gameweek 10, with six of those eight fixtures given a difficulty rating of 2.

But the issue with Raphinha – along with a number of other players, including Mohamed Salah – is the uncertainty over quarantine rules, following international matches.

If unresolved, players returning from red-list countries like Brazil and Egypt could be unavailable in Gameweek 4 – after the first international break – but Premier League chiefs are reportedly in talk with the UK Government to plea for exemptions.

Hopefully, we’ll get more clarity on that situation before the Gameweek 3 deadline.

BEFORE YOU GO… Our official Daily Fantasy Sports Partner, FanTeam, are offering all NEW customers a FREE ENTRY to this weekend’s Gameweek 1 Fantasy Premier League contest, which has a £12,500+ guaranteed prize pool.

Simply register for your free account here, or by clicking the banner below and once you’ve signed up, you’ll automatically receive a FREE ENTRY to this weekend’s Gameweek 1 Weekly Monster, which has a guaranteed prize pool of £12,500+ – with around £1,500 going to the first place winner!

NO DEPOSIT or card details are required but this game is strictly 18+ only – simple join FanTeam via this link here, or by clicking the banner below and as a welcomed reader of our site, you’ll receive a free entry.

Using your 105M budget – just like FPL, pick your best 11-man squad (no subs) for Gameweek 1 only – imagine you are playing your Free Hit chip. The contest kicks off at 15:00PM GMT on Saturday the 28th of August and covers 9 Gameweek 1 matches only.