The Watchlist series is back to identify some key players who caught the eye in Gameweek 3, ahead of the upcoming Fantasy Premier League schedule.

Here are three future transfer targets ahead of Gameweek 4 for both the @FFPundits and @_FPLTips teams.

As always, we have provided you with both a video and written version of our Gameweek 4 Watchlist preview.

Calvert-Lewin and Raphinha have both featured in previous episodes and are still very worthy of consideration but we’ll be focussing on three new targets today.

Before we get into those new additions to the Watchlist, I have to briefly mention the HUGE news that Cristiano Ronaldo is back at Manchester United.

The 36-year-old was the top goalscorer in Serie A last season, netting 29 times in 33 appearances and surpassing Romelu Lukaku’s tally of 24 goals in 36 appearances for Inter Milan.

With the expectation that he’ll come in and take over penalty duties, downgrading Bruno Fernandes in midfield is likely to be a popular route to fitting him in.

Next 3 fixtures: Leicester (A), Southampton (H), Chelsea (A) 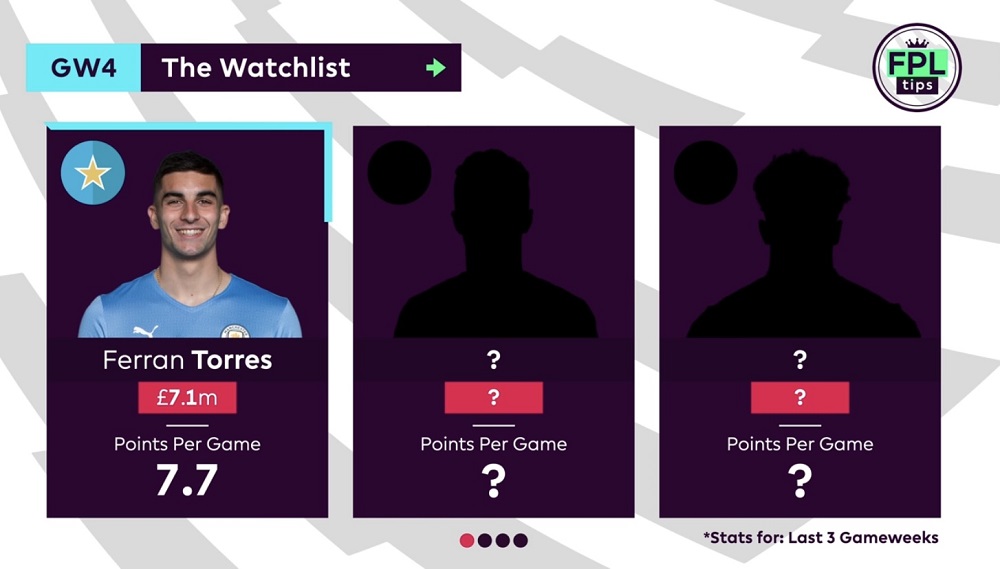 After seeing his effort ruled out by VAR against Norwich in Gameweek 2, the Spaniard made amends with three goal involvements in a 5-0 win over Arsenal this weekend (2 goals, 1 assist).

Continuing to line up in an ‘Out of Position’ number nine role, no teammate took more than his 10 touches in the opposition’s box or exceeded his 2 big chances.

No FPL midfielder has had more than his 3 big chances throughout the season and he ranks top amongst players in his position for expected goals – with 1.65.

Pep Guardiola offered some high praise after this weekend’s game, comparing Torres to Jamie Vardy with his movements in behind.

With Man City now unlikely to sign a striker this summer, it certainly looks as though he’ll get plenty more opportunities to lead the line.

Though the upcoming fixtures could be better, with away ties against Leicester, Chelsea and Liverpool in the next 4 Gameweeks. 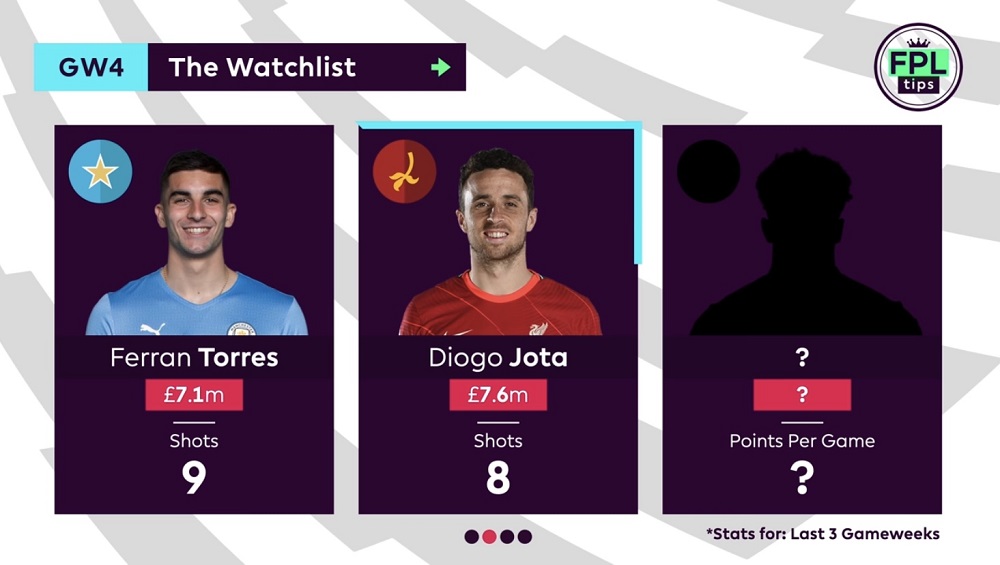 Just one Gameweek on from selling Diogo Jota, the ‘Out of Position’ midfielder is immediately back on the radar.

Roberto Firmino was named ahead of him in the starting XI to face Chelsea but had to be withdrawn before half-time with a suspected hamstring injury.

We’re still awaiting the results of his scan but if the Brazilian were to be sidelined for a number of weeks, it would bring Jota right back into consideration for upcoming fixtures against Leeds, Crystal Palace and Brentford over the next 3 Gameweeks.

The Portuguese international averaged a chance every 15.7 minutes against the Blues in Gameweek 3, with no player from either side able to better his 3 shots inside the box.

Throughout the season, Jota ranks top amongst teammates for big chances – with 3, while his 0.49 non-penalty expected goals (xG) figure, per 90 minutes, can only be beaten by Firmino – with 0.61.

Next 3 fixtures: Watford (A), Brenttford (H), Southampton (A) 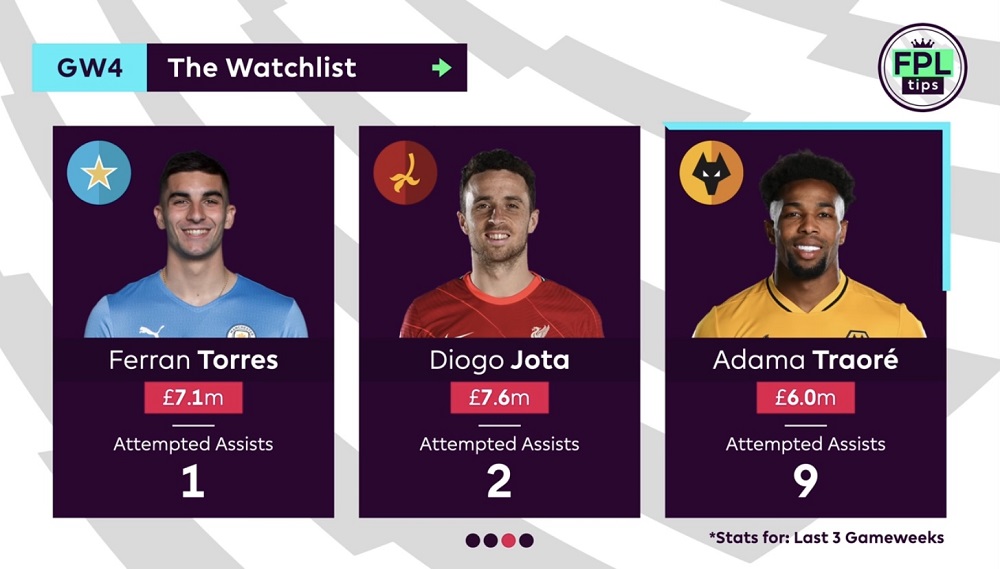 Wolves were unfortunate to lose 1-0 for a third successive game, again out-performing their opponents on expected goals (xG).

But one man that continued to look threatening for them this weekend was Adama Traoré, who danced around the United defence with ease and created 4 chances.

His 0.71 expected assists (xA) figure was comfortably the best of any player in that match; only ranking behind Grealish (0.88) and Mahrez (0.93) amongst all midfielders this Gameweek.

Throughout the season, Traoré ranks joint-top amongst players in his position for chances created – with 9 – while only Mohamed Salah (13) has fired more than his 12 shots.

He only trails Ferran Torres for expected goals, meanwhile, with a figure of 1.57 compared to the 1.65 managed by the Man City number nine.

Ties with Watford, Brentford, Southampton and Newcastle in the next 4 Gameweeks can surely help to turn those impressive numbers into FPL returns.