The main inward activity so far represents a bit of a gamble, but if it pays off, some serious green arrows await – particularly at the expense of those who aren’t being quite as pro-active.

The scramble to pick up as many points as possible from these five fixtures has also led to some big name FPL favourites being tossed onto the scrapheap, and why not? It’s still all to play for!

As always, I wish all of you the very best of luck for Blank Gameweek and may your arrows be green.

Callum Wilson made an instant impact on his return from injury in Gameweek 30 with a goal and an assist in Bournemouth’s victory at Huddersfield.

That impressive return has been enough to convince over 250,000 FPL bosses to take a punt on the England forward ahead of Gameweek 31, when the Cherries face Newcastle at the Vitality.

The lack of forwards in action in Gameweek 31 is no doubt a big reason why Wilson is this week’s most transferred in player, but with 11 goals and 9 assists to his name, and a home fixture on the horizon, the expectations are perhaps justifiable.

That said, I’m tempted to err on the side of caution when it comes to Bournemouth assets this week, and the reasons for this are discussed below.

Bournemouth assets are proving to be very popular this week, as Ryan Fraser, their FPL golden boy so far this season, follows Callum Wilson as the second-most transferred in player ahead of Gameweek 31, with over 175,000 of us owning him this weekend.

Fraser matched Wilson’s goal and assist last time out, ending a run of 8 games without any notable returns. So, was it a flash in the pan or is the flying Scotsman back on form?

Well, it would appear that many FPL bosses are expecting Bournemouth to be busy in front of goal against Newcastle, but defensive resilience and organisation is a real hallmark of any Rafa Benitez side, who go into this in good from having won three of their last four. I don’t necessarily agree that this is a home banker.

With that in mind, Leicester’s Youri Tielemans, who has hit the ground running since his arrival in January, looks an interesting alternative if you’d rather spread your bets.

Son was the hottest of hot properties not so long ago, but following a run of four games without a goal or an assist, and no Gameweek 31 fixture, he’s been first in line for the chop in over 208,000 FPL squads at the time of writing.

The Korean has suffered a dip in form, mirroring Spurs’ fade from the title race, and it may be down to fatigue given his hectic schedule this season, which included mid-season participation in the Asian Cup.

If that is the case, we may not see him return to his best between now and the end of the season, and with other midfield assets beginning to emerge, there’s no room for carrying passengers at this stage of the season – particularly ones costing the best part of £9.0m.

Manchester United finally succumbed to their first league defeat under Ole Gunnar Solskjaer in Gameweek 30, going down 2-0 at the Emirates.

This defeat has also sparked a mass ditching of Paul Pogba, with over 125,000 exploring other options ahead of Gameweek 31 – a move made all the more pressing with United not involved in league action this time around.

If anyone can fashion an additional £1.0m through a bit of wheeling and dealing, Sadio Mane is the ideal replacement for Gameweek 31. 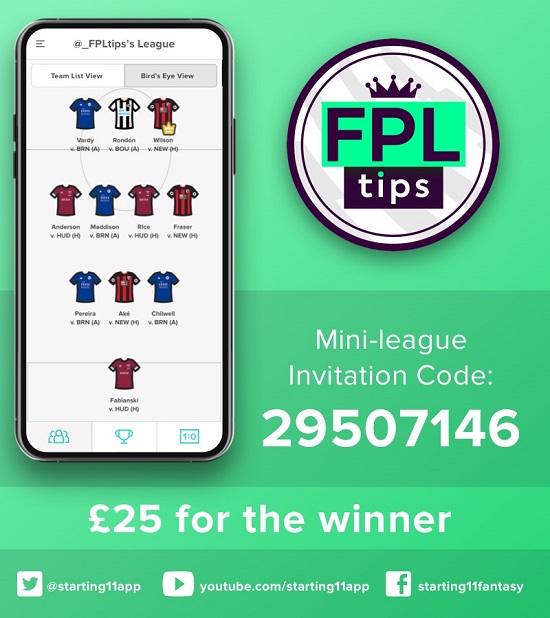 BEFORE YOU GO… We’ll be giving away £25.00 in cash to the winner of FPLTips’ SATURDAY Mini League on Starting 11 this week.

Simply download the free app below and create your best 11-man team for SATURDAY’S 3 Premier League games – oh, and you’ll need to pick a captain.