With the start of the 2020/21 Premier League season just days away, it’s time to take a look at how the team is shaping up.

There have been a few changes since the First Draft team a couple of weeks ago, so I’ll take you through each one and bring you up-to-date.

Before we begin, if you’d like to join the FPLtips league, the code is: r2dypm.

Southampton’s Alex McCarthy keeps his place between the sticks, though there is some temptation to turn him into Aaron Ramsdale with the £0.5m that’s currently left in the bank.

Sheffield Utd’s fixtures turn quite sour after the first 5, so he would be more of a short-term option with an early wildcard in mind.

For the backup goalkeeper position – Jed Steer got the nod over Ørjan Nyland in their recent friendly against Arsenal, so he comes in as the first change.

There have been rumours of Aston Villa looking to sign Sergio Romero from Manchester United but that hasn’t gone through as of yet.

There are two changes in defence, with Trent Alexander-Arnold, James Justin and Stuart Dallas the players to keep their places.

Leicester have signed a new full-back but with Ricardo Pereira likely to be a few weeks away from fitness, Justin can still offer a cut-price route into the Leicester defence for some favourable opening fixtures.

Like many players, he’s been on international duty, so there is a concern that he won’t have had much time to train with his new teammates before Gameweek 1. 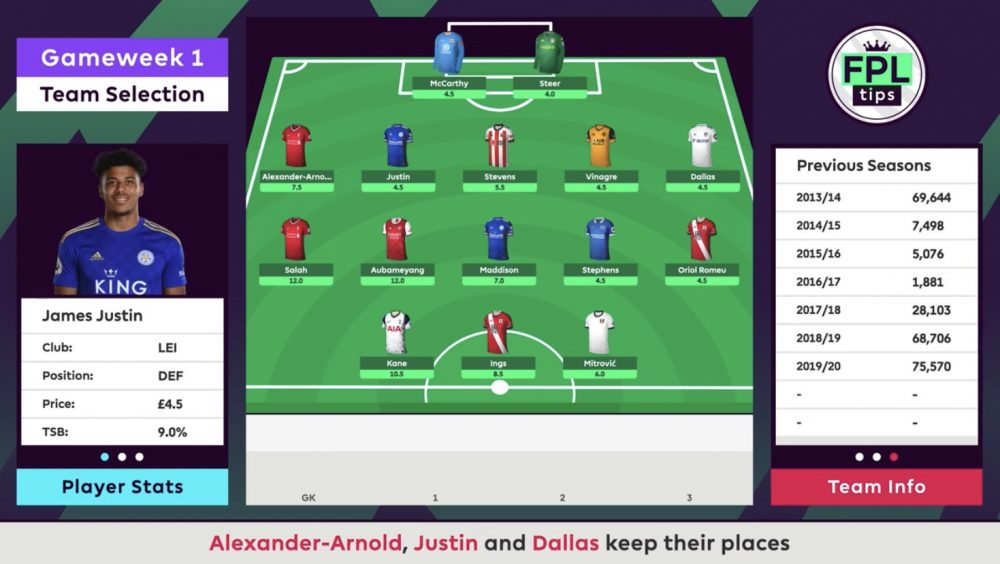 But providing he looks set to get the nod over Aurier from the off, there’ll be a place here for the Irishman.

There are rumours of Rúben Vinagre being sold by Wolves, so for now, he’s one of the players to make way; if that situation changes and he does stick around, there’s definitely value there.

But, having made consecutive starts in three pre-season matches for Crystal Palace, Tyrick Mitchell comes in to replace him and helps move the structure more towards a classic 3-4-3 formation.

He’ll just be someone to leave on the bench typically and possibly earn a price rise or two if he does see game time early on.

The midfield is where there’s been the most change, with only Mo Salah and Pierre-Emerick Aubameyang keeping their places.

James Maddison faces a race to be fit in time for Gameweek1 having only recently returned to training.

With that in mind, changes elsewhere have helped fund the upgrade to Heung-Min Son; who’s looked lively for Spurs in pre-season, though Dele Alli is an alternative.

That price point is also quite useful as a placeholder for a Chelsea midfielder, which might be something to look at from Gameweek 4, when they host Crystal Palace and Southampton back-to-back. 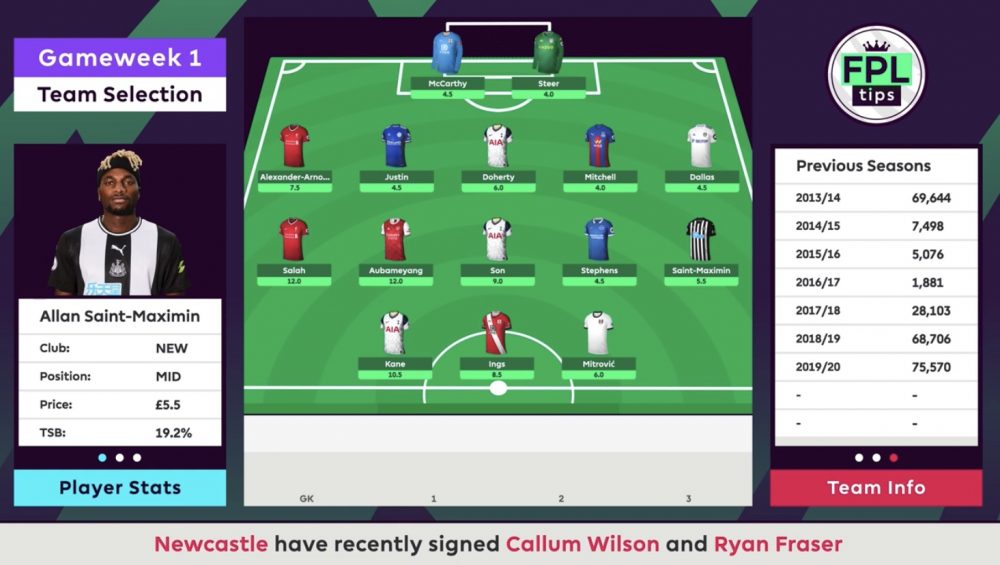 With doubts over the availability of West Ham’s Tomas Soucek in Gameweek 1 due to reports of him being in quarantine, it’s slim-pickings for that 4th midfielder spot.

Newcastle have made signings to bolster their attack in the last couple of days, bringing in ex-Bournemouth duo CallumWilson and Ryan Fraser.

The longer-term fixtures aren’t amazing but ties with West Ham, Brighton and Burnley in the first 4 Gameweeks hold some promise.

The final change in midfield is only a very small one, seeing one Brighton £4.5m option come in to replace another.

As mentioned in the ‘Top 5 Bench-Fillers’ video, Yves Bissouma was perhaps slightly more impressive than Dale Stephens since the restart last season and played more minutes, so he gets the nod here.

Although, Romeu’s underlying numbers were the more impressive – it might be worth leaving open the Southampton slots for future transfers.

Aleksandar Mitrović is the only man to keep his spot amongst the forwards as, reluctantly, Danny Ings makes way.

Che Adams is much more of a gamble but offers a £2.5m saving on his strike-partner.

Southampton were one of the top 6 teams for goals scored (16) and big chances (19) since the restart period.

Each of his 4 goals last season came during the final 6 Gameweeks, where he even narrowly outscored Danny Ingsfor FPL points (34 to 32). 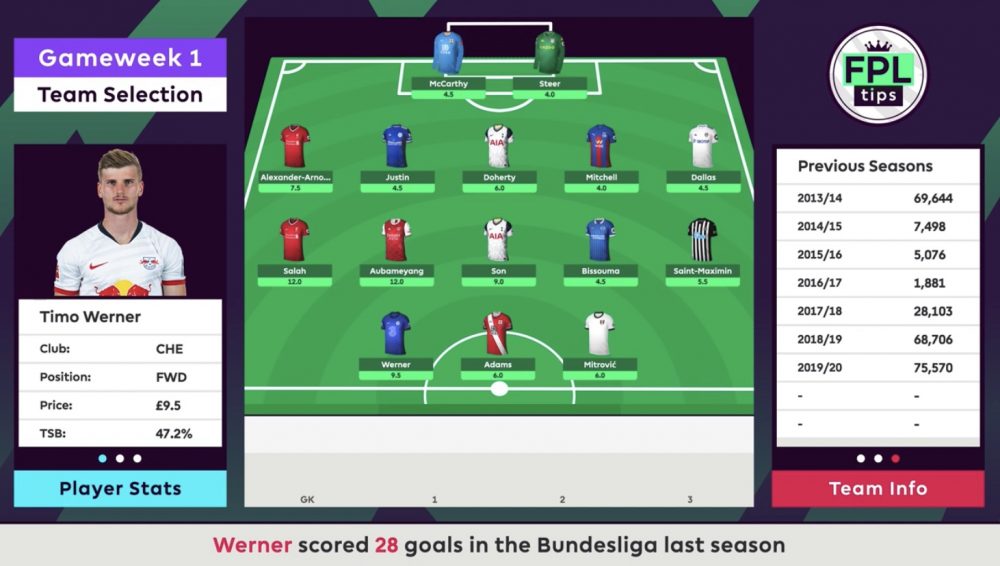 The final change sees Harry Kane make way, with Heung-Min Son now in the team instead, freeing up a place for the popular Timo Werner.

Chelsea’s new signing is the 2nd most selected player in the game, only behind Alexander-Arnold, sitting in over 47% of teams.

The Gameweek 1 captaincy decision is still very much between Mohamed Salah and Pierre-Emerick Aubameyang.

It was the Egyptian who wore the armband in the ‘First Draft’ but the Arsenal talisman has been looking the sharper of the two in pre-season.

He terrorised the Liverpool defence and netted the opening goal in their Community Shield clash and more recently scored a brace in a friendly against Aston Villa.

There are still a few more days to ponder the decision but for now, Aubameyang is looking the more likely candidate.

So, that’s the current 15-man squad but with a Blank Gameweek 1 for Man Utd and Man City, let’s briefly talk strategy for a moment.

There are two premium spots in midfield, currently occupied by Salah and Aubameyang and the plan is to keep that structure throughout the opening Gameweeks, swapping between premium assets, with captaincy in mind.

So, from Gameweek 2, a potential transfer might be Salah to Bruno Fernandes and then for Gameweek 3, Kevin DeBruyne could come in to replace Aubameyang.

But of course, if other, more pressing issues arise within the squad, they will have to take priority.

BEFORE YOU GO… We at Fantasy Football Pundits are delighted to announce that we have renewed our partnership with FanTeam for the 2020/21 season.

Thank you for reading ‘Fantasy Premier League Tips: ‘FPLTips: Gameweek 1 Team Selection’ which was written and produced by FFPundits & FPLTips.