Manchester City and Manchester United make 2020/21 Premier League debut appearance in Gameweek 2, but is now the time to own their players?

Gameweek 1 is done and dusted and it’s been a steady start to the season with 72 points on the board, primarily thanks to that late call to captain Salah ahead of Aubameyang.

The Egyptian was fortunate to be awarded 2 penalties but definitely passed the eye test with a lively all-round performance.

No player took as many as his 9 total shots or his 8 attempts from inside the box while only Aubameyang matched his 3 efforts on target.

Southampton were the biggest disappointment of the Gameweek, almost playing straight into the hands of Crystal Palace – who let them have possession, sat back and defended and then picked them off on the counter.

Kyle Walker-Peters was one of four late changes in the ‘Final Team’ for Gameweek 1.

The right-back had a red card downgraded to a yellow but came close to redeeming himself late on when he set up a big chance that was missed by Danny Ings.

James Justin was the only man to earn points at the back, winning a penalty in Leicester’s 3-0 win over West Brom.

Timo Werner also picked up an FPL assist for winning his side a penalty and interestingly, it was Jorginho who stepped up to convert rather than the new signing himself.

Chelsea didn’t quite seem to click going forwards, despite earning three points against Brighton; Werner attempted 5 shots but none were deemed by Opta to be big chances.

So, let’s move on to the transfer plans ahead of Gameweek 2.

As mentioned in last week’s video, the initial idea was to use Mo Salah as a placeholder for Bruno Fernandes in Gameweek 2 but all of a sudden that move is a lot harder to make.

Saying that, the Egyptian tends to do better at Anfield and particularly against teams outside of the ‘top six’, so a trip to Stamford Bridge could pose more of a challenge.

Chelsea ranked best in the league for expected goals conceded at home throughout Project Restart (1.17), keeping 3 clean sheets in 4 games and conceding just the one goal.

So, I’m not going to completely rule out that transfer but I will say I’m leaning 60-40 in favour of holding Salah now and potentially going without a Man Utd player for Gameweek 2.

The way I see it is we’d be trading known data – in Salah’s eye-catching performance against Leeds – for unknown data in Man Utd assets that haven’t yet started their season. 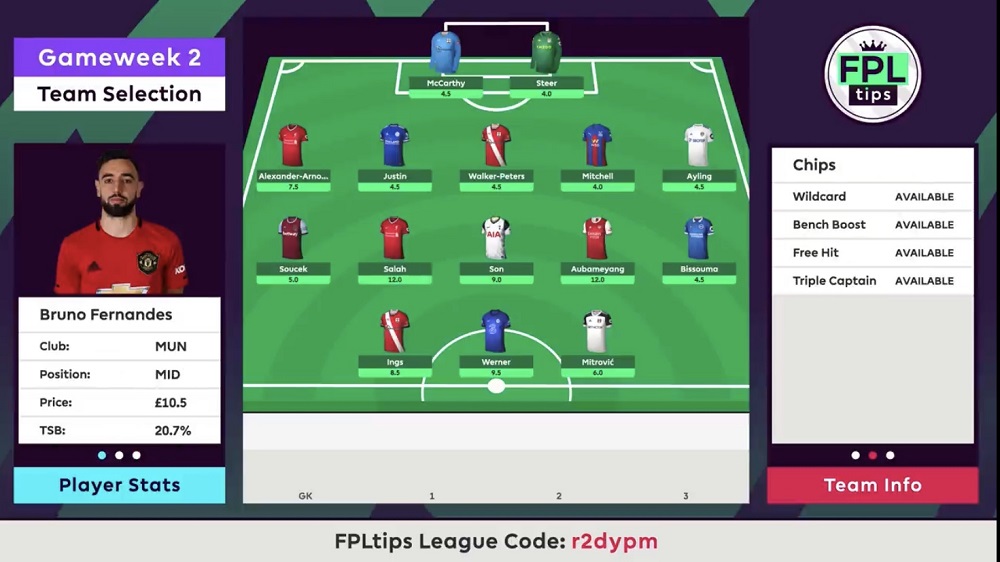 A number of key players were missing from their last pre-season friendly against Aston Villa, including Bruno Fernandes and Anthony Martial, who had been away on international duty – so we have no way of really knowing how they’ll come out the gates.

It’s also worth noting that Crystal Palace – their Gameweek 2 opponents – were superb at containing a Southampton attack that stood out as one of the best in the league post-restart last season.

Another possible move to consider could be Timo Werner out to Anthony Martial, or even an Everton forward.

Chelsea weren’t overly impressive against Brighton and it looks like it may take time for them to click; Pulisic and Ziyech still need to come into the team as well.

But it is only Gameweek 2, we know he’s a quality forward from his time at RB Leipzig and so, I think he probably does deserve a couple more weeks in the side before making that call.

With all that being said then, it’s looking likely that the plan will be to save a free transfer and here’s how the team is set to line-up for Gameweek 2:

It could be worth handing a rare start to Jed Steer, just in case he gets the nod for Aston Villa’s home tie with Sheffield Utd.

UPDATE: Aston Villa have now signed Arsenal goalkeeper Emi Martínez, however, so Alex McCarthy is likely to keep his place between the sticks for another week.

Spurs took 5 efforts on target without scoring against Everton, so there could be some save points in that one for him.

The only other change to the XI comes in defence, as Luke Ayling replaces Kyle Walker-Peters with Fulham up next for Leeds.

Both he and Dallas looked lively going forwards against Liverpool in Gameweek 1; only Klich completed more final third passes amongst teammates.

With no plans currently to bring in a Man Utd player for Gameweek 2, the captaincy is a fairly straight-forward decision and it’s Pierre-Emerick Aubameyang who takes it.

The Arsenal talisman was on target in the season opener against Fulham, where he was unfortunate to come away with just the one return.

He amassed 5 goals and 2 assists in 4 matches at the Emirates post-restart last season, averaging 10.3 points per game.

West Ham have shipped 13 goals in 7 matches against the ‘big six’ teams during this calendar year, failing to keep a single clean sheet.

Thank you for reading ‘Fantasy Premier League Tips: ‘FPLTips: Gameweek 2 Team Selection’ which was written and produced by FFPundits & FPLTips.