Gameweek 2 was a week where patience was rewarded; Heung-Min Son scored 4 goals as Spurs found some form away at Southampton, while Ings and Mitrovic each netted a brace.

You could have made a case for transferring out all three of those players before the deadline after they each failed to return in Gameweek 1.

Penalties played a big part once again as the new handball rule continues to take effect.

Timo Werner won his 2nd penalty of the season after he was brought down by Thiago but Jorginho failed to convert from the spot.

It will be interesting to see whether the German now steps up to take the next one himself.

Elsewhere, the captaincy hot streak just about continued as Aubameyang supplied an assist in a 2-1 win over West Ham.

The FPL midfielder wasn’t overly convincing, however, taking just 1 shot – which came outside the box.

Soucek was unfortunate not to win a penalty in the same match, after his header appeared to strike the arm of Arsenal defender Gabriel.

A goal from Justin was a pleasant surprise after Leicester lost the clean sheet early on to Burnley.

The defender had 4 touches in the opposition’s box; one more than Jamie Vardy managed.

So, let’s move on to the transfer plans ahead of Gameweek 3.

The plan throughout pre-season was to move Aubameyang on to De Bruyne after the first 2 Gameweeks and the Arsenal midfielder didn’t do enough against West Ham to convince otherwise.

The Belgian comes in as the first of two free transfers after converting from the penalty spot against Wolves, before later supplying a slightly fortunate assist for Jesus.

Everton assets have remained firmly on the radar but after Son and Ings both stepped up, it’s difficult to find space for Rodriguez or Calvert-Lewin.

Ings and Werner each face West Brom in the next 2 Gameweeks, so the plan is to let them at least see out those fixtures before looking elsewhere.

Soucek has got himself into some good positions in the box so far this season and he’s a player who can be a threat from set pieces in any fixture, so there was no rush to sell him as such. 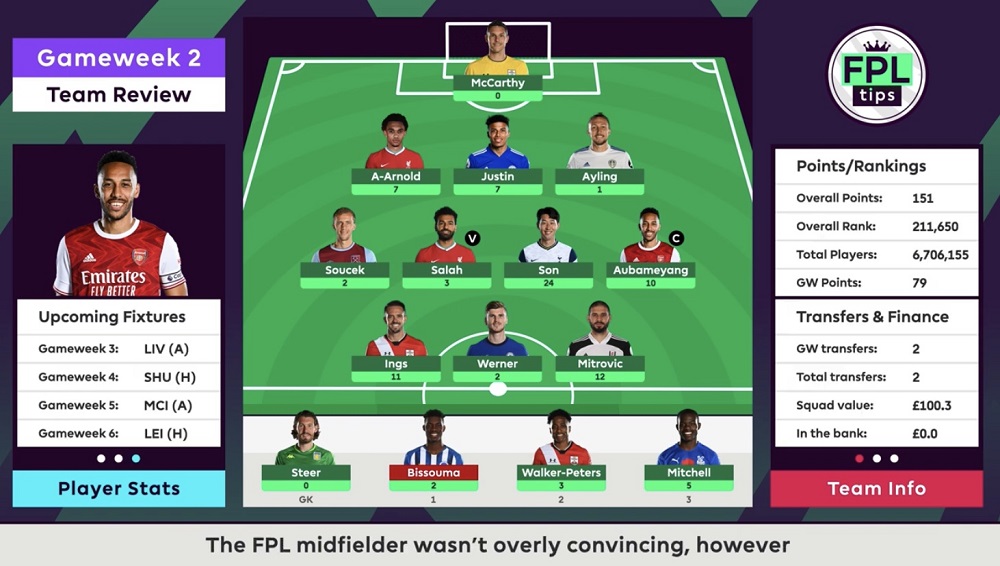 But the money freed up by the first transfer enables an upgrade to Daniel Podence, who impressed for a second week running, playing alongside Jimenez in a front three.

The fixtures for Wolves couldn’t be better over the next 5 Gameweeks, where they host Fulham, Newcastle and Crystal Palace, amongst away trips to West Ham and Leeds.

So, both of those two free transfers have been made early and here’s how the team is set to line-up for Gameweek 3:

Changes to the team

McCarthy was far from his best in the heavy defeat to Spurs last Gameweek and there may even be a chance that he loses his starting place.

But fixtures against Burnley and West Brom up next could offer him the chance to redeem himself.

The double-up on Southampton at the back isn’t looking ideal but Walker-Peters at least demonstrated his attacking threat by picking up an assist against Spurs last Gameweek; he comes back in to replace Justin, who travels away to Man City.

Following his red card, Bissouma won’t be providing any cover for the next 2 Premier League matches, so Mitchell moves into that first spot on the bench.

It’s a close call between him and Ayling for a place in the XI but Sheffield United have looked fairly toothless so far this season, failing to score in both matches.

The captaincy decision is fairly wide open this Gameweek, with Salah, De Bruyne, Son and Werner all possible contenders.

West Brom have conceded the most goals and big chances so far and Werner has largely impressed, aside from putting the ball in the back of the net.

Salah and De Bruyne both being on penalties makes it hard to overlook them but it is such a close call between them, ahead of respective home ties with Arsenal and Leicester. 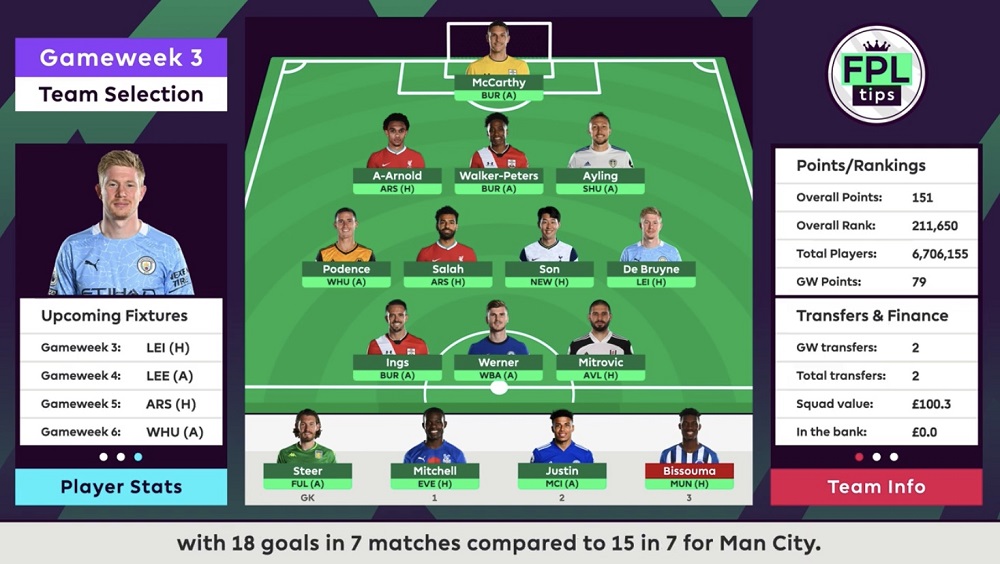 Their opponents each conceded 10 goals in 4 matches against Liverpool and Man City last season.

The Reds fared slightly better at home against the ‘top 8’ teams, with 18 goals in 7 matches compared to 15 in 7 for Man City.

But Salah averaged 6.7 points per game over those matches, while De Bruyne averaged 8.5.

So, as things stand, the Belgian takes the armband but be sure to keep an eye out for the final team this week as it could go down to the wire.