The average score in Gameweek 3 was just 43, so it was a pretty low-scoring round.

It was good to continue the green arrows with a score of 50, although the two free transfers made didn’t do any favours.

De Bruyne attempted 3 assists, one of which was a big chance created for Fernandinho, who probably should have scored.

Selling Soucek backfired, after the West Ham midfielder was credited with an assist and could have easily returned more points in the 4-0 win, taking 5 shots.

Podence was missing from the Wolves squad after picking up a knock that we only learned about after the game, so Mitchell came in from the bench with 1 point.

The Southampton trio helped salvage the Gameweek, with a good result and a clean sheet against Burnley; Danny Ings scoring the only goal.

The game between Sheffield Utd and Leeds could have gone either way, with both goalkeepers playing their part, so it was good to be on the right side of that result with the Ayling clean sheet.

Alexander-Arnold picked up an assist and maximum bonus points for his contributions against Arsenal, while Mane turned in the rebound from Salah’s saved shot to see the Egyptian also credited with an FPL assist.

So, let’s move on to the transfer plans ahead of Gameweek 4:

There’s only one free transfer available but it might be time to make the first 4-point hit of the season!

Heung-Min Son struck the bar and the post against Newcastle before being withdrawn at half-time with a hamstring injury and he unfortunately looks set to be out for a while.

There are possible like-for-like replacements in Mahrez, Zaha and James Rodriguez but I’m not overly sold on any of them.

Mahrez offers a good short-term option but you’re always going to be concerned about players coming back from injury and possible rotation.

Zaha has started the season well but will he still be a Crystal Palace player by the time the transfer window closes?

I think there’s a bit of a risk in bringing him in this week, although the transfers rumours have died down of late in fairness.

James Rodriguez is obviously a quality player who brings so much to that Everton side but I think it’s more the forwards who benefit from his creativity and now we know he isn’t on penalties – that’s a big factor too.

So, I’m actually considering making two moves to free up the funds to upgrade Son to Bruno Fernandes. 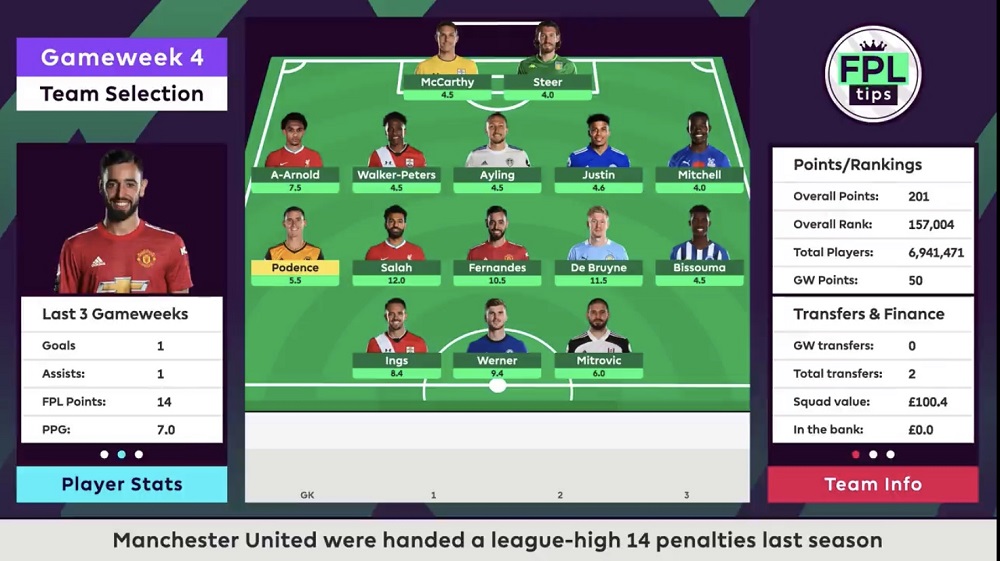 Yes, the fixtures aren’t that great for United; they face Spurs, Chelsea and Arsenal in the next 4 Gameweeks but they are all at Old Trafford and Solskjaer has done fairly well in big games so far.

Manchester United were handed a league-high 14 penalties last season and we’re seeing more than double the amount of penalties awarded so far this season compared to last.

So, Bruno Fernandes can be a set-and-forget option that will keep ticking over throughout the season.

Timo Werner is also on the chopping block after failing to score for a third game in Chelsea blue.

He struck the crossbar in the first-half against West Brom but as the game progressed, with Chelsea 3-0 down at half-time, Lampard kept throwing on attacking players and that left Werner quite deep and wide at times.

Again, in terms of like-for-like replacements, I’d say Vardy and Jimenez stand out as the best options.

But I’d need someone cheaper than that to afford the Bruno Fernandes move, so Calvert-Lewin is the man most likely to come in. 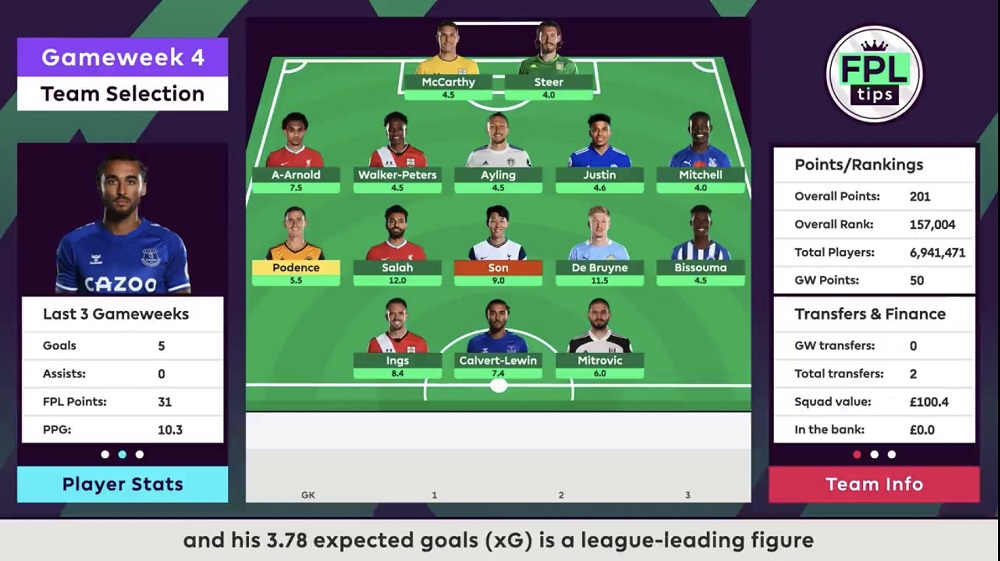 He also faces some tough matches in the near future, with Man Utd and Liverpool in the next 5 but he’s been getting so much service this season, with the quality that Everton have added to their midfield.

No player has been afforded more than his 5 big chances and his 3.78 expected goals (xG) is a league-leading figure; even ahead of Jamie Vardy (3.39) – who’s taken 4 penalties.

Podence is also a concern after missing the defeat to West Ham with a knock but the manager did say he was hopeful of him returning to training this week.

With the international break coming up after this Gameweek, even if he does miss out against Fulham, he’d then have a further two weeks to recover ahead of Gameweek 5.

So, the plan is to keep him and hope that he can still play a part in those favourable upcoming fixtures for Wolves.

No transfers have been made as of yet but it’s those two moves to bring in Bruno Fernandes and Calvert-Lewin, for a 4-point hit, that are the most likely.

With that in mind, here’s how the team could line-up in Gameweek 4:

Leeds take on Man City this weekend, so Ayling moves to the bench and Justin comes into the XI.

West Ham were impressive against Wolves but the Foxes are also coming off the back of a good result themselves.

Only 4 defenders have had more touches in the opposition’s box this season than the Leicester fullback (6).

Bissouma will complete his three-match ban when he sits out of the Carabao Cup tie midweek, freeing him up to return to action in Gameweek 4; he moves back to that first spot on the bench.

Danny Ings could be a differential captaincy shout ahead of a home tie with West Brom; they’ve conceded league-high totals of 11 goals and 11 big chances so far.

But the big-hitters in midfield De Bruyne and Salah each have fairly favourable matchups as well.

After their wobble against Leicester, there’s maybe a little more doubt over Man City in this one; Leeds have shown they can compete at this level and are capable of causing an upset. 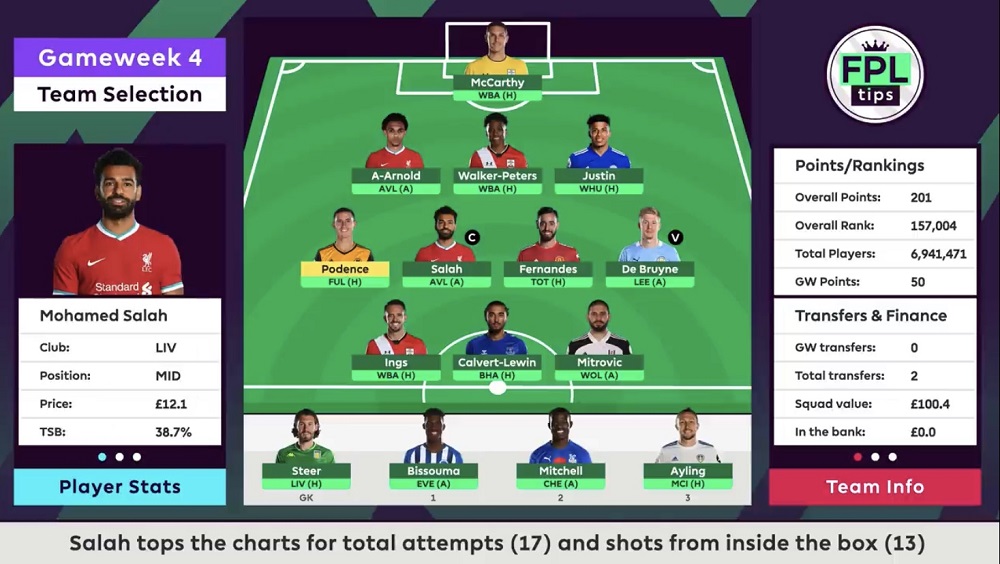 Liverpool have just come through what looked like being a tough fixture against Arsenal under Arteta; they passed that test with flying colours and it’s hard to see anything other than three points for them again on Sunday.

Their opponents Aston Villa have made a strong start to the season, with two wins and two clean sheets against Sheffield United and Fulham but the Champions will pose a much bigger threat.

Mo Salah tops the charts for total attempts (17) and shots from inside the box (13) and the armband is likely to go back on the Egyptian king.