With the form Spurs are in going forward, they look capable of scoring in any fixture, so Heung-Min Son is again an option for the armband.

After a good start to the season, Gameweek 5 has seen the first red arrow and it was a week where those who played the wildcard generally did very well.

The transfer plans changed slightly after De Bruyne was ruled out, with Grealish instead coming in for the Belgian and Podence reluctantly getting another game.

The Wolves midfielder started against Leeds and forced two saves from Meslier but came away without a return.

The extra funds from selling De Bruyne meant that the planned hit from Ings to Calvert-Lewin was no longer necessary to fund Grealish, though it was still somewhat tempting – Harry Kane also became an option.

The reason for not making the extra move was to keep the options open and be able to assess the situation when we get an update on the Man City midfielder.

Up until now, the patient approach had been working well this season but it was a costly decision to avoid Kane in the end.

The injury to De Bruyne gave managers an easy route to Son or the funds to get Kane, so just owning one of them was no longer enough it seems.

Danny Ings did at least get on the scoresheet himself for a single return against Chelsea, with the rest of the points coming from Mo Salah and a slightly fortunate Raul Jimenez.

The Mexican scored a heavily deflected goal and was lucky to escape VAR punishment for a kick out at a Leeds defender.

Mitrovic has been frustrating to own and never more so than this Gameweek, where he fired a penalty against the crossbar and went on to miss another two good chances; he ranked top of all players for expected goals (1.06) in Gameweek 5.

There were also some near misses in defence, with Alexander-Arnold seeing his free kick saved, Justin losing the clean sheet in stoppage time and Ayling similarly conceding late into the 2nd half.

So, let’s move on to the transfer plans ahead of Gameweek 6:

Barring a positive update on De Bruyne, the plan will be to move Podence on to James Rodriguez and finally take advantage of that impressive Everton attack.

As mentioned in yesterday’s Watchlist video, he had both of his 2 big chances this season against Brighton in Gameweek 4, after Richarlison had been withdrawn.

So, the Brazilian’s absence over the next three matches could once again see Rodriguez getting into the box more and becoming more of a direct goal threat, in addition to his already impressive creative numbers.

That could well be the only change for Gameweek 6 but there would still be enough funds to upgrade either Ings or Jimenez to Kane, for a hit, which definitely warrants consideration.

Last Gameweek, it was Ings who was very close to making way and there is some small regression in some of his numbers compared to last season but he just continues to find a way to keep up his scoring record. 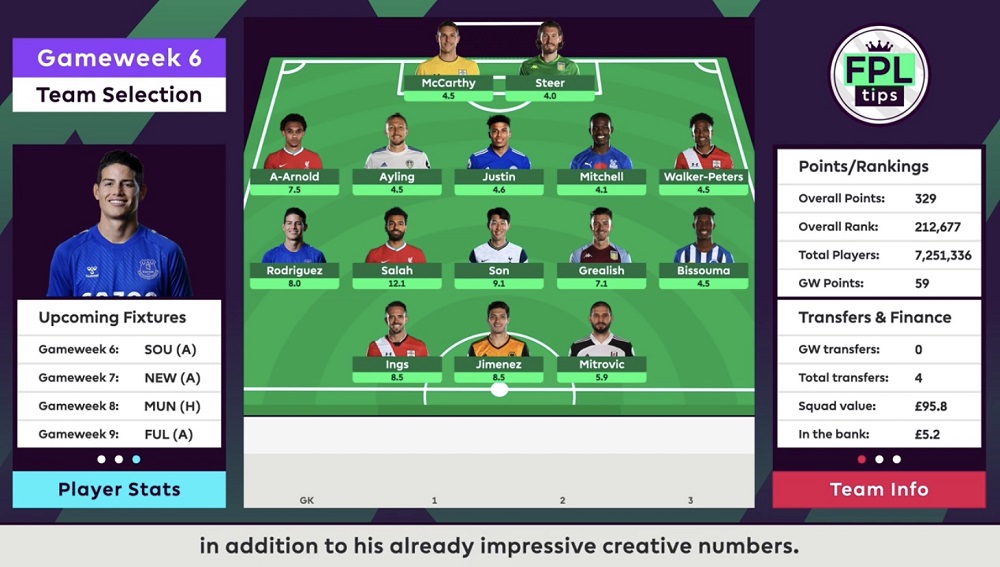 Wolves continue to struggle in front of goal but it was these upcoming home fixtures against Newcastle, Crystal Palace and Southampton that made Jimenez such an appealing transfer in only a couple of weeks ago.

So, the patient approach would be to give him more time and on paper at least, Newcastle is a more favourable opponent than Burnley, who Spurs face in Gameweek 6.

The Clarets in fact rank 2nd for expected goals conceded per game so far this season (4.18), only behind Aston Villa (3.69).

Mitrovic is likely to stay for at least the next two home matches against Crystal Palace and West Brom but if he continues to frustrate, a move to Michail Antonio for Gameweek 8 will be on the cards.

With that in mind, here’s how the team is set to line-up for Gameweek 6:

In the form Spurs are in going forward, they look capable of scoring two or three goals in any fixture at the moment, so Heung-Min Son is again an option for the armband.

But given the points made earlier about Burnley and their expected goals conceded figure, it will almost certainly be Mo Salah who captains the side this Gameweek. 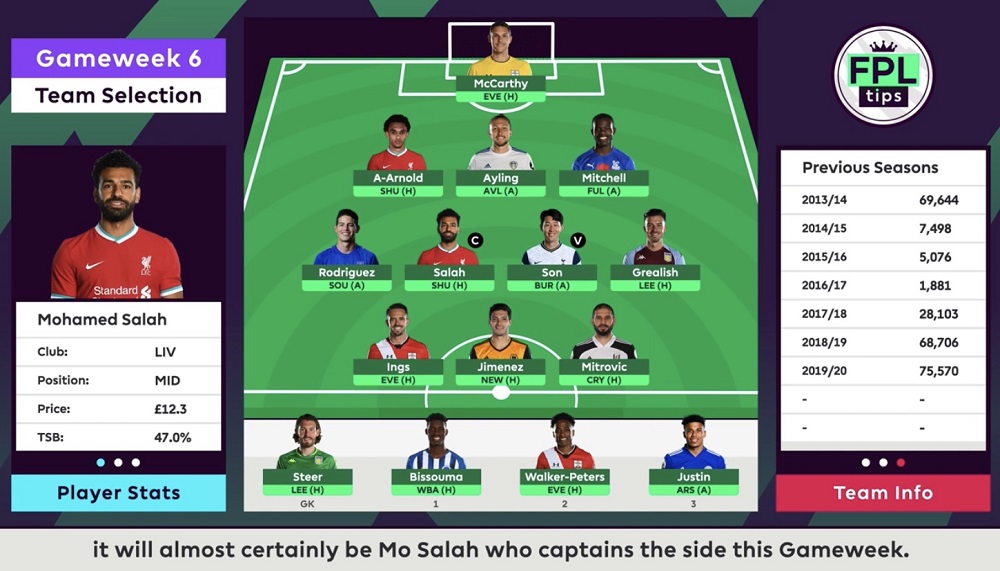 You can almost always count on the Egyptian king to deliver at Anfield against a non-top six side and Sheffield Utd have made a poor start to the season.

The Blades are without a win over the first 5 Gameweeks, suffering 4 defeats and failing to keep a single clean sheet.

Leicester have conceded four goals without reply in the last two matches and with a trip to Arsenal up next, things aren’t looking great for Justin; he moves to the bench and Mitchell comes into the XI.

The young left-back is far from certain to start now that Van Aanholt is back available but he didn’t really put a foot wrong against Brighton, so maybe it’s still his place to lose.

Walker-Peters is on standby to come in if needed, though a double-up on Southampton defence wouldn’t be ideal.

They’re up against an in-form Everton side that rank 2nd for goals scored (14) and 3rd for big chances (16) this season – hopefully, that means McCarthy will be kept busy.

Liverpool defence is a big talking point after Van Dijk suffered that unfortunate injury and looks set to be out for a number of months.

Long-term, there are definitely huge doubts over Alexander-Arnold now but a home fixture against Sheffield Utd is surely not the time to make the call to sell.