Johnstone was called upon in place of Pope after Burnley’s match against Fulham was postponed.

The Baggies suffered a heavy 4-0 defeat to Arsenal but the keeper at least made 8 saves.

Coufal emerged with the only clean sheet in defence after West Ham snatched a late 1-0 win over Everton, having restricted the Toffees to just 2 shots on target and zero big chances.

Justin flirted with points against Newcastle but it all went south in the last 10 minutes, where he received a booking before Andy Carroll made it 2-1.

Bruno Fernandes proved reliable once again in midfield, converting a penalty to restore United’s lead against Aston Villa, while Son predictably exploited an adventurous Leeds side. 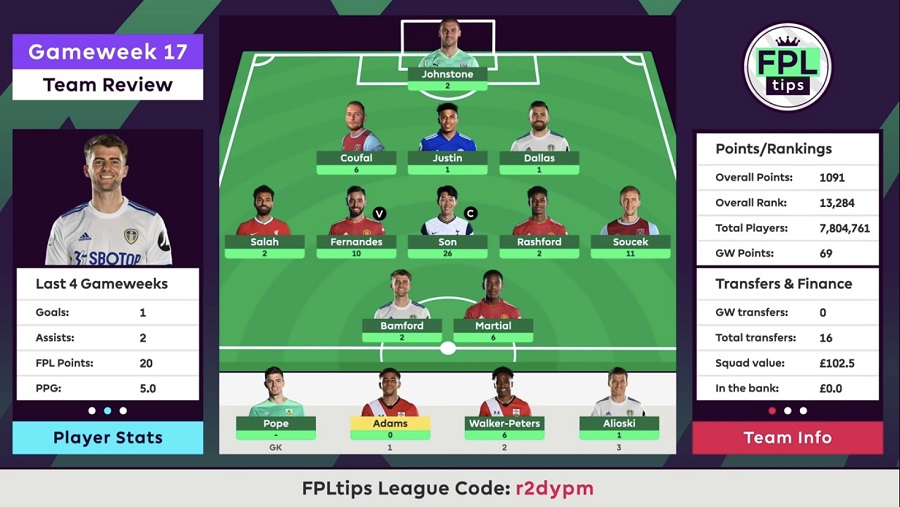 Salah was kept relatively quiet by a resilient Southampton defence as Liverpool dropped points for a third successive match.

There was a huge slice of good fortune to finish off the Gameweek, with Soucek subbing in for Che Adams – who was missing as a precaution after that kick to the head he suffered against West Ham.

Bamford squandered a few chances against Spurs, with no player attempting as many as his 7 shots during the Gameweek but Martial got on the scoresheet on his return to the United XI.

The Free Hit chip is active ahead of next Tuesday’s Gameweek 18 deadline and here’s how the latest draft is shaping up:

Newcastle face a Sheffield Utd side that have scored just once in the last 4 Gameweeks, so Darlow lines up between the sticks.

There is a little bit of a risk with him now that Dubravka has returned to fitness but Steve Bruce recently stated that the shirt is Darlow’s to lose after a string of impressive performances this season.

Stones has formed a great partnership with Dias at centre-back over the last 7 Gameweeks, where Man City have kept a league-best 5 clean sheets.

They’ve conceded league-low tallies of 2 goals, 3 big chances, 12 shots on target and 34 shots in the box over that run.

Cancelo ranks 4th amongst defenders for attempted assists (24) throughout the season, behind only Cresswell, Alexander-Arnold (each 25) and Robertson (32).

Arsenal’s recent resurgence has seen Tierney amass 28 points in the last 4 Gameweeks, with 2 clean sheets, 2 assists and a goal.

His 11 attempted assists over that spell can only be bettered by Shaw (12) amongst defenders, while only Dallas has taken more touches in the opposition’s box (14 to 12).

Bruno Fernandes, Son and Rashford are the only three players to keep their places on the Free Hit.

After Liverpool’s defeat to Southampton, Man Utd now have the chance to go top of the league if they pick up points at Burnley.

They’ve produced league-best tallies of 11 goals, 18 big chances and 30 shots on target over the last 4 Gameweeks. 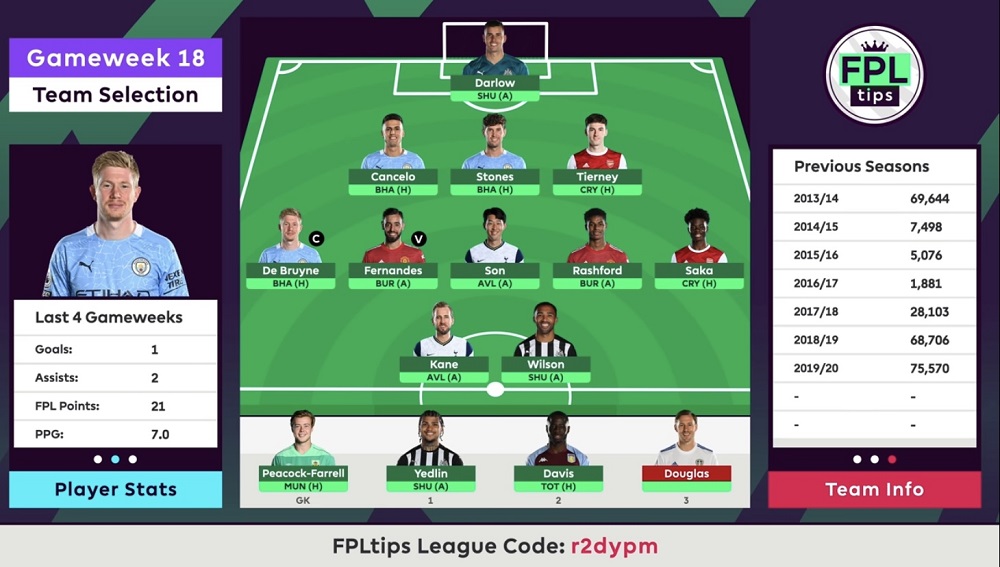 Over the last 6 Gameweeks, El Ghazi (6) and Fernandes (5) are the only midfielders with more big chances to their name than his 4.

No player has created as many big chances as his 6.

Saka has picked up 2 goals and 2 assists over the last 3 Gameweeks to average 9.0 points per game.

No FPL midfielder can better his 7 shots in the box over that period, with only Rashford and El Ghazi able to match that figure.

Aston Villa won’t be an easy game for Spurs but we’ve seen Kane and Son work together so well all season and any opportunity to own the pair surely has to be taken.

Only Watkins (15) and Bamford (16) have attempted more shots than the England captain (11) over the last 4 Gameweeks.

Callum Wilson has been a talisman figure for Newcastle this season, with a direct involvement in 12 of their 18 goals.

Sheffield Utd have shipped 11 goals in the last 6 Gameweeks, with only Leeds, Crystal Palace (each 13) and West Brom (16) faring worse.

Gameweek 18 captaincy will surely be a choice between Fernandes and De Bruyne.

The Portuguese midfielder has been the more consistent from the two this season but there’s a sense that the best is yet to come from De Bruyne.

Over their last 6 matches, Brighton have been far more porous than Burnley; shipping 10 goals to the Clarets’ 3.

So, it’s the Belgian who takes the armband as it stands.

BEFORE YOU GO… Our official Daily Fantasy Sports Partner, FanTeam, are offering all NEW customers FREE ENTRY to this week’s Gameweek 18 Fantasy Premier League contest, which has a £9,000 guaranteed prize pool.

Simply register for your free account here, or by clicking the banner below and once you’ve signed up, you’ll automatically receive a FREE ENTRY to this weekend’s Gameweek 11 Weekly Monster, which has a guaranteed prize pool of €10,000 – with around £1,000 going to the first place winner!