With Blank Gameweek 28 and 31 to consider, FPLTips are taking extra care with their transfer strategy – but in comes Wolves’ Matt Doherty.

Gameweek 27 saw a full house of returns at the back, despite McCarthy being the only one to earn a clean sheet.

All 3 defenders picked up attacking returns, though Enda Stevens was forced off at half-time with a minor calf injury.

The move to bring in Traoré got off to a rough start, after he was only used for an 18-minute cameo off the bench, while Doherty and Jota profited from the change in formation.

Captain Mo Salah had a little bit of good fortune with some poor goalkeeping to score his goal but no midfielder fired more than his 3 shots on target during the Gameweek.

The frustration continued for Jamie Vardy, who stuck the post against Man City, while Danny Ings also missed a big chance against Aston Villa.

There are a few different options to consider for this week’s free transfer, with one eye firmly on Blank Gameweek 31, as well as this weekend.

Richarlison’s form means he’d be the prime target to bring in amongst midfielders but that would require losing either Grealish or De Bruyne; neither of whom have a fixture in Gameweek 28.

But a Double Gameweek 29 remains a possibility for Man City and Chelsea, while Aston Villa’s meeting with Newcastle in Gameweek 31 would go ahead if the Magpies were to lose to West Brom in the next round of the FA Cup.

Losing Martin Kelly is a slightly less glamorous alternative transfer, with Charlie Taylor looking to have secured his starting place at Burnley. 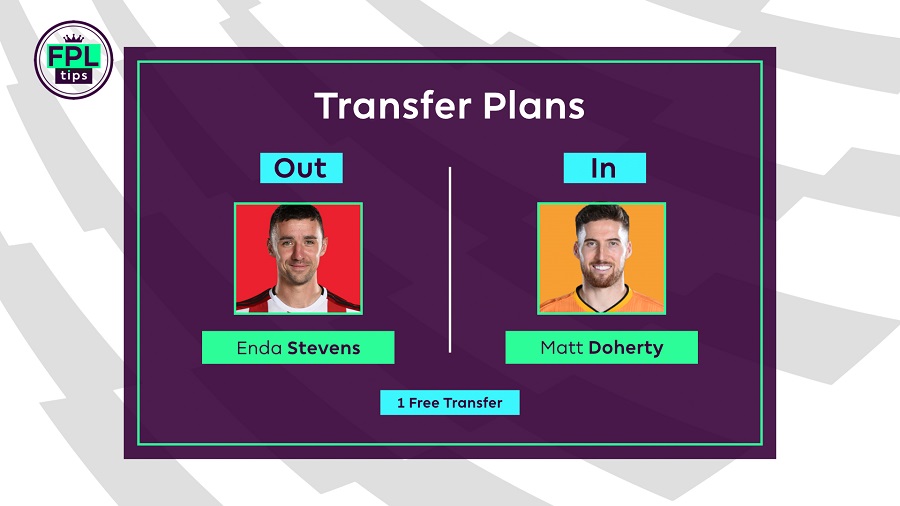 But the most likely transfer will be to bring in Matt Doherty, who has form and fixtures on his side, including a guaranteed match against Bournemouth in Gameweek 31.

Although the injury to Enda Stevens only appears to be minor, he doesn’t have a fixture this weekend and is unlikely to in Gameweek 31, so making that switch now that there’s enough money in the bank after last week’s transfer looks like a solid upgrade.

Here’s how the team is likely to lineup for Gameweek 28:

All 4 of Alex McCarthy’s clean sheets this season have come since Gameweek 19; only Man Utd (5) and Liverpool (8) have kept more in that time.

West Ham scored twice against Liverpool on Monday but in the last 6 Gameweeks, only 5 teams have managed fewer than their 7 goals and only 4 teams have been afforded fewer big chances (11).

Matt Doherty could come in to form a back 4 this Gameweek, with Söyüncü also earning a start alongside the Liverpool fullbacks.

No defender has had more big chances (2) or shots in the box (6) than the Wolves wing-back over the last 4 Gameweeks.

Alexander-Arnold and Robertson rank joint-1st with 11 attempted assists apiece over the same period.

It’s hard to say whether or not Adama Traoré will get back into the starting XI to face Spurs, after the recent change to a 3-5-2 formation has sparked a return to form for Diogo Jota.

But the 24-year-old found plenty of joy in the reverse fixture back in Gameweek 17, where he put in a ‘man of the match’ performance and scored his side’s only goal.

Mo Salah has 4 goals and 1 assist in the last 4 Gameweeks, while ranking 1st for shots on target (9) and from inside the box (20) and joint-1st for big chances created (4).

Watford are without a clean sheet over the same period, while only West Ham (14) have shipped more than their 9 goals.

Todd Cantwell comes into the XI, with De Bruyne and Grealish both without a fixture this Gameweek.

7 of his 8 FPL returns have come at Carrow Road, where he’s averaged 4.8 points per game.

Norwich have only scored once in the last 4 Gameweeks but have 4 in their last 4 at home.

Jamie Vardy is now without a goal in his last 7 appearances but it’s difficult to sell him before fixtures against Norwich, Aston Villa and Watford.

He earned attacking returns in each of the reverse fixtures against those sides, amassing 3 goals and 1 assist and averaging 7.7 points per game.

Raúl Jiménez has 4 goals in the last 5 Gameweeks, where he’s averaged 6.0 points per game.

No player has been afforded more big chances (8) in that period, while only Salah can better the Mexican for shots in the box (24 to 18). 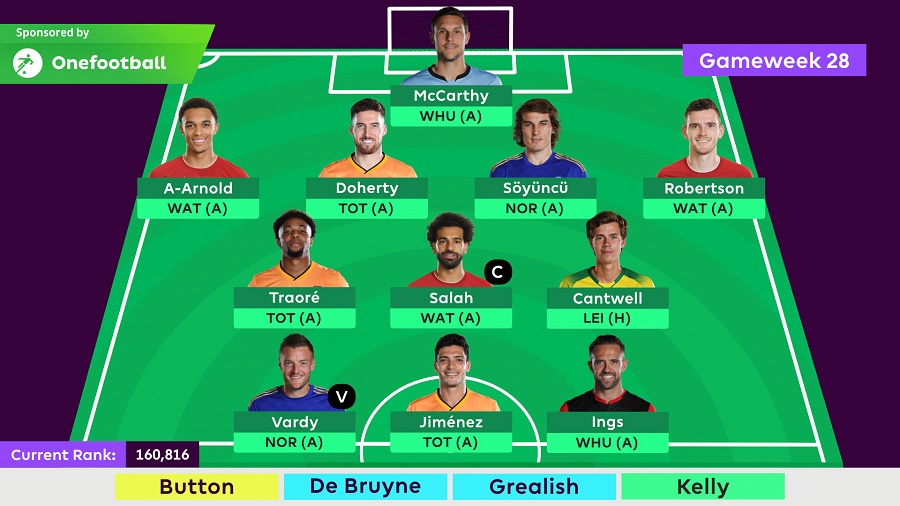 Spurs have only shipped 6 goals in the last 6 Gameweeks but they’ve allowed their opponents 15 big chances; only 5 teams have afforded more.

After failing to score last weekend, Danny Ings now has just 1 goal in the last 5 Gameweeks but he’s up against a defensively poor West Ham side this Saturday.

The Hammers have shipped 15 goals over the aforementioned period; 6 more than any other side.

Mo Salah hasn’t fared quite as well away from home this season, potentially bringing Vardy and even the ever-consistent Alexander-Arnold into the conversation for captaincy.

While Vardy and Salah have each had 5 big chances in the last 6 Gameweeks, the Liverpool talisman has scored 5 goals in that time, while Vardy has failed to get on the scoresheet at all.

Since the winter break, Liverpool have looked a little more shaky defensively, conceding 3 goals in their last 2 matches in all competitions.

So, reluctantly, the armband may well stay on the Egyptian for the trip to Watford.