Gameweek 23 saw the move to bring in McCarthy get off to a poor start, after Southampton shipped 3 goals in defeat to Wolves, with no side conceding more than their 4 big chances.

Once again, there were very few clean sheets besides Liverpool, who kept their 7th consecutive shutout.

There were no returns across the midfield, despite De Bruyne’s best efforts; no player took more than his 6 shots during the Gameweek, with one of those striking the woodwork.

The Belgian also provided a league-high tally of 6 attempted assists, with one of those resulting in a big chance.

Jamie Vardy saw his penalty saved by Nick Pope, while Danny Ings managed just the 1 attempt at goal as he failed to score against Wolves, after netting in each of his last 4 starts.

Jiménez was the unlikely hero in the end, scoring twice to bring the score to a respectable 41 points – but with a 4 point hit to be removed, the rank has taken another fall down from 65,327 to 92,781.

Please note that all player prices, ownership percentages and source of odds quoted in this video and article were correct at the time of writing.

The plan is to go ahead with a move for Robertson to complete the triple-up on Liverpool assets ahead of their Double Gameweek 24.

Although it will be nerve-wracking to go without Mo Salah, in a week where he and Mané will be heavily captained, in the long-run, investing further in a defence that’s kept 7 clean sheets in a row seems just as viable.

Diego Rico will be the man to make way, after freeing up funds in the last couple of weeks. 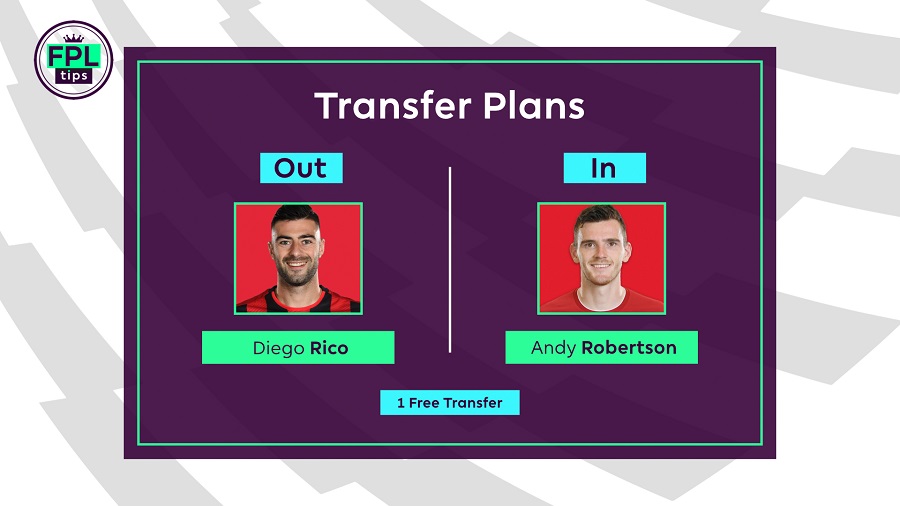 Bournemouth have suffered 4 defeats in a row, slipping down to 19th place and they’ve kept just 1 clean sheet in the last 12 Gameweeks.

No transfer will be made until as late as possible, however, just in case of any early team news.

Here’s how the team is likely to lineup for Gameweek 24:

McCarthy faces a Crystal Palace side that earned an impressive 2-2 draw with Man City on Saturday, despite taking just 5 shots; the fewest of any team in Gameweek 23.

Only 4 teams have fired fewer efforts on target (18) in the last 6 Gameweeks and only 3 teams have been afforded fewer big chances (8).

The Liverpool double-up (Alexander-Arnold and Robertson) first travel away to Wolves in Gameweek 24, a side that have scored a very respectable 10 goals in the last 6 Gameweeks; only Watford, Soutampton (each 11) and Man City have fared better.

They have, however, failed to score against Liverpool in any of their last 3 league meetings.

West Ham have scored 5 goals in 3 games under David Moyes, but 4 of those came in a single game against Bournemouth.

It’s a close call between Söyüncü and Kelly for the remaining spot in defence, with both Leicester and Crystal Palace keeping just 1 clean sheet in the last 8 Gameweeks.

Maddison has attempted 9 assists in the last 3 Gameweeks, with only Buendía and De Bruyne creating more.

The Belgian has fired 12 shots in the last 4 Gameweeks to rank joint-top amongst midfielders, alongside Salah, Mané and Sarr.

No player has been afforded more big chances than Sadio Mané (5) in that time.

Richarlison remains a doubt for Newcastle’s visit to Goodison Park on Tuesday but Carlo Ancelotti said he was hopeful of having him available.

Despite missing the 1-1 draw with West Ham, the Brazilian has fired 5 shots on target in the last 4 Gameweeks; only behind Salah and Mané (each 6) amongst midfielders. 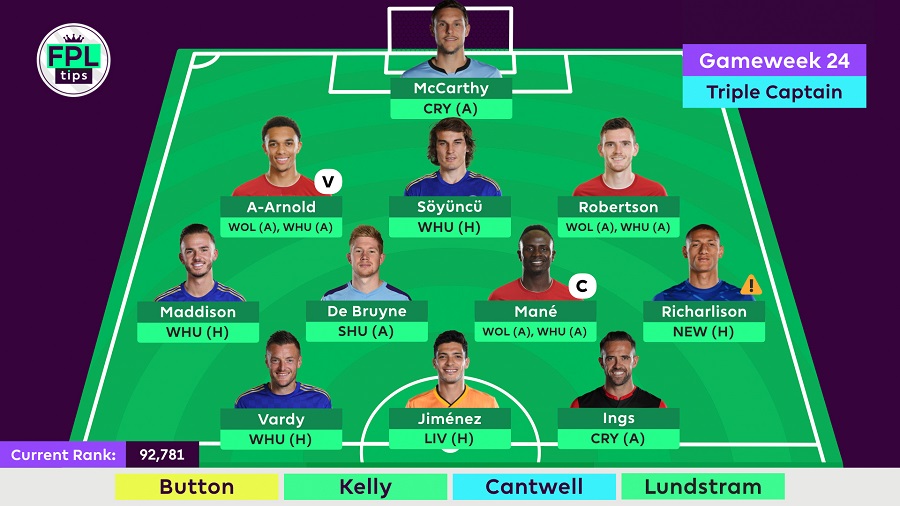 It looks like a tough week for the forwards, with Vardy struggling to recapture his form since returning from injury, while Jiménez faces the league’s toughest defence.

But he’s been afforded 4 big chances in the last 4 Gameweeks, with only Ings, Jesus (each 5) and Agüero (6) faring better amongst forwards.

Ralph Hasenhüttl recently hinted at possible rotation for his forwards ahead of the midweek trip to Crystal Palace but also talked about how Danny Ings looks to be in really good shape at the moment.

With Liverpool set to partake in a Double Gameweek, with plenty of rest time in-between games, now seems like the perfect time to unleash the Triple Captain chip.

Alexander-Arnold has actually scored the joint-highest points amongst Liverpool players in away matches this season (67), level with Firmino.

On top of that, the Reds have conceded just 5 goals away from home this campaign; 7 fewer than any other team.

But with Mané and Salah likely to be very-highly captained this Gameweek, it’s a big risk to look elsewhere.

In the last 4 Gameweeks, the Senegalese international again comes up marginally on top, with 6.8 points per 90 minutes, compared to 6.5 for Salah.

Who will be YOUR Double Gameweek 2️⃣4️⃣ #FPL captain?

[reply below if you plan to captain another player]