It’s hard for FPLtips to look beyond captaining a Manchester City of Arsenal attacker in Double Gameweek 29.

Gameweek 28 saw very few points at the back and the decision to sell Nick Pope back in Gameweek 22 continues to backfire.

Doherty was one of 2 transfers made and he pretty much single-handedly carried the defence this week, with a goal and assist against Spurs.

There weren’t any points across the midfield as captain Mo Salah was kept very quiet in Watford’s win over Liverpool, failing to produce a shot on target or create a single chance.

Calvert-Lewin came in for a hit after news that Jamie Vardy was set to miss out broke minutes before the deadline and he and Jiménez continued their impressive form.

UPDATE: The earlier postponed game between Man City and Arsenal has been rescheduled for Wednesday the 11th of March – meaning we’ll have a small Double Gameweek 29, with both teams playing twice.

Aubameyang has become a transfer target and with the Double Gameweek in mind, the Arsenal front-man has bagged 3 goals in his last 2 league outings and is my number one target for the double. 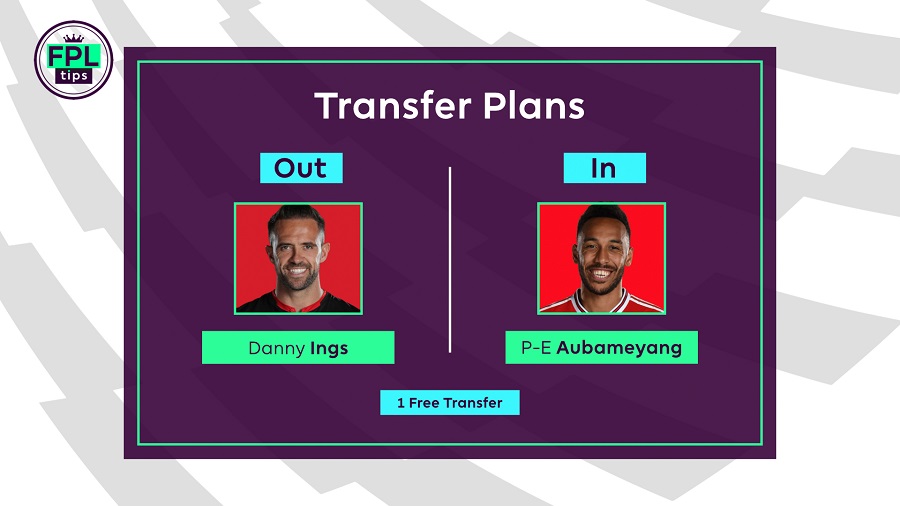 It’s unfortunate timing, with Southampton set to host Newcastle on Saturday but he’s only scored 1 goal in the last 6 Gameweeks and has started to have his minutes managed more carefully.

Here’s how the team is likely to lineup for Gameweek 29.

Southampton have kept just 1 clean sheet in their last 4 matches and only West Ham have shipped as many as their 9 goals over that period.

But Gameweek 29 sees McCarthy host a Newcastle side that have failed to score a single goal in the last 4 Gameweeks, while mustering up the joint-fewest big chances (3).

With doubts over Traoré’s availability, due to an ongoing shoulder issue, there’s the option to stick with 4 defenders (Alexander-Arnold, Doherty, Söyüncü, Robertson) and move the Wolves midfielder to the bench.

Liverpool conceded 6 big chances in defeat to Watford; that’s as many as in their previous 5 matches combined.

They’ll hopefully return to form against a Bournemouth side that have scored just once in their last 4 away trips.

Wolves have kept 3 clean sheets in their last 4 matches, following the return of Boly, and no defender can better Doherty for shots in the box (7) or on target (4) in that time.

Leicester have only conceded 2 goals in the last 3 Gameweeks and face an Aston Villa side that have scored 7 in their last 6.

Only Norwich (6) and Newcastle (5) have been afforded fewer big chances than their 8 during that period.

De Bruyne comes back in after his Blank Gameweek 28, ahead of Double Gameweek, where he’ll be facing Man Utd away and Arsenal at home. The Belgian has been directly involved in 5 goals over his last 6 league outings (1 goal, 4 assists), where he’s averaged 6.2 points per game.

Mo Salah comes into the meeting with Bournemouth having scored in each of his previous 4 home matches. He’s scored in every game he’s played against the Cherries, amassing 7 goals in 5 appearances.

Aston Villa take on Leicester on Monday as Jack Grealish returns from his Blank Gameweek 28. He’s been directly involved in 7 of the last 12 goals his side have scored (4 goals, 3 assists) and has thrived on being Villa’s main man.

Only Maddison (17) has attempted more assists than his 15 in the last 5 Gameweeks.

No player has been afforded more big chances than Calvert-Lewin in the last 4 Gameweeks, where the Everton forward has averaged 6.5 points per game.

Everton have amassed league-high totals of 9 goals and 15 big chances over that period.

Chelsea have conceded 7 goals over the same time frame, with only Bournemouth (8), Southampton and West Ham (each 9) faring worse.

Jiménez has 5 goals in the last 6 Gameweeks, where no player has been afforded as many as his 9 big chances. 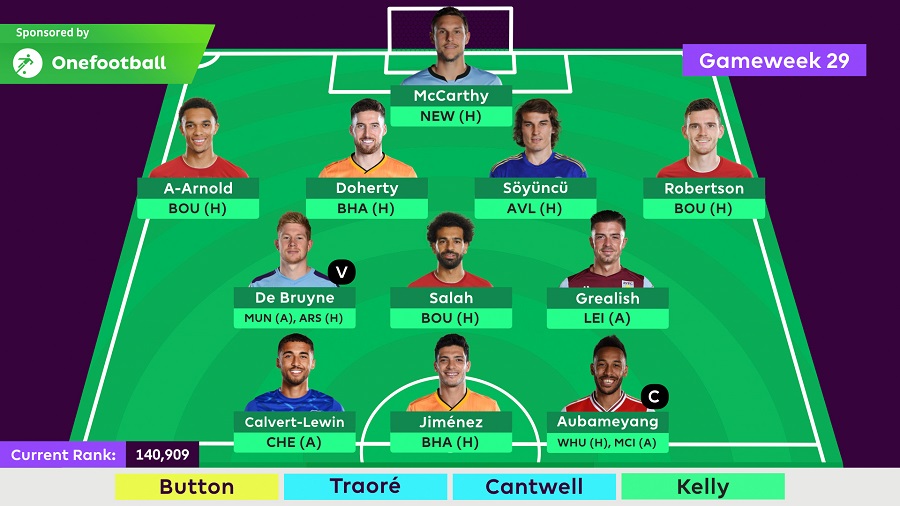 Brighton have shipped 8 goals in their last 4 away matches; only Norwich (9), West Ham and Bournemouth (each 10) have conceded more.

With 6 goals in his last 7 appearances, Aubameyang has averaged 6.4 points per game.

As well as facing a West Ham side that have shipped 9 goals in the last 4 matches, Arsenal could potentially have a 2nd fixture, against Man City.

Mo Salah is likely to be the stand-out pick due to his impressive record at Anfield and his history against Bournemouth.

But, as there is now a confirmed Double Gameweek 29, it will come down to a choice between De Bruyne and Aubameyang.

Both would be fantastic options but with Arsenal now out of the Europa League, there may be less need for Arteta to rotate his men, boosting the appeal of the in-form forward.

Since writing this article, the news has also broken recently that Manchester City’s Kevin de Bruyne is currently struggling with a shoulder injury, which threatens to keep him out of the Manchester Derby.

You need to pick what YOU think will be the highest scoring fantasy football lineup – without having to worry about how the team would perform next week as once Gameweek 29 is over, your team either wins, or loses.

To get involved, please click the FanTeam banner below and register for your free account – head over to the Lobby and there you will see the Gameweek 29  €50,000 guaranteed prize-pool in all its glory.

Oh – and if you register use our link here or via the banner below, you will automatically get a free €2 entry to their €6500 Gameweek 29 prize-pool contest too!