Fantasy Premier League has returned ahead of the resumed 2019-20 season, with UNLIMITED transfers available for what has been named “Gameweek 30+”.

For those of us with chips remaining, and no, we don’t mean smartphonecasinos.co.uk chips, there’s an opportunity to go all-in on this Double Gameweek, using the Bench Boost chip to load up on 12 players from the 4 teams involved, before resetting back to a more balanced squad next Gameweek by using the wildcard.

With that in mind, here’s how the team is currently shaping up for Gameweek 30+:

You can expect more articles and videos over the coming days from us, The Fantasy Football Pundits and FPLTips.

As tempting as a triple up on Man City attack is for this Gameweek, goalkeeper Ederson will surely be the most assured of minutes from Pep Guardiola’s side.

Only Burnley (11) and Liverpool (12) have kept more clean sheets than their 10 this season and no side have conceded fewer big chances (16) during home matches.

Sheffield United have also kept 10 clean sheets this season, 4 of which came on the road.

In all honesty, there’s a case to be made for any of the Blades’ backline but George Baldock (6), John Lundstram (8) and Enda Stevens (4) have contributed the most in the way of attacking returns, with a combined 18 goal involvements between them.

They face an Aston Villa side that managed just 6 goals in their last 6 outings, ranking ahead of only 3 teams, while their second opponents, Newcastle, have scored the joint-fewest goals during home matches this season (12).

7 big chances created by Matt Targett during this campaign ranks joint-3rd amongst FPL defenders; only behind Robertson (10) and Alexander-Arnold (16).

All 4 of Villa’s clean sheets have come on home turf, ahead of visits from Sheffield Utd and Chelsea in Gameweek 30+.

Teammate Jack Grealish has amassed 7 goals and 7 assists for the season and amongst Double Gameweek players (ARS, AVL, MCI & SHU), only Kevin De Bruyne (96) has attempted more assists than the Aston Villa talisman (69).

The Belgian has been directly involved in 26 goals (8 goals, 18 assists); at least 6 more than any other Double Gameweek option.

Man City have won each of their last 4 league meetings with the Gunners, scoring 11 goals and conceding just 1.

Burnley, meanwhile, have shipped 10 goals in their 4 away matches against the ‘big six’ this season, an average of 2.5 per game.

Before the break, Mesut Özil had amassed a goal and assist in Arsenal’s last 3 matches. 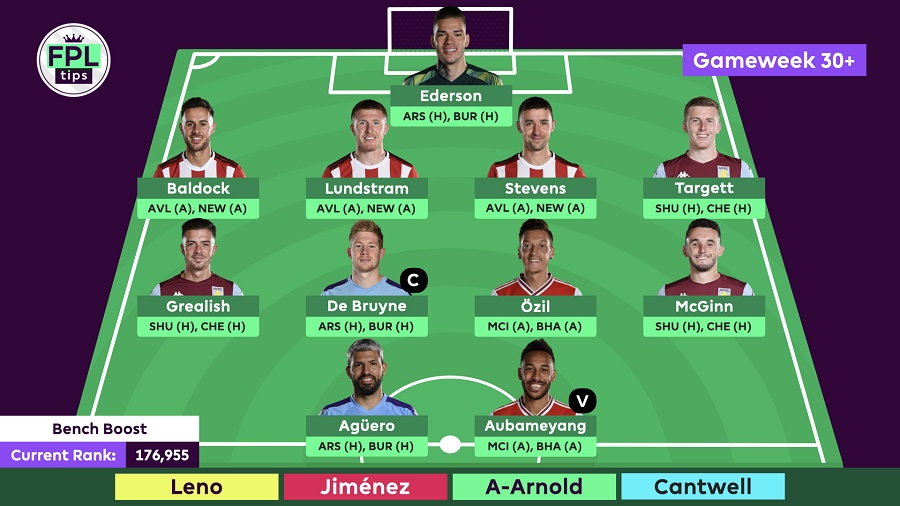 The former German international started all 10 league games under Mikel Arteta, along with only Leno and David Luiz.

No teammate attempted as many assists (19) during that period or completed as many final third passes (147).

John McGinn now looks to be fully fit and available to play a key role in Aston Villa’s fight for survival.

Prior to injury, he’d played a hand in 5 goals (3 goals, 2 assists) across the opening 17 Gameweeks; putting him only 6 FPL points behind Jack Grealish at that moment in time.

Whilst game time is uncertain for any Man City attacker, an average of 7.97 points per 90 minutes ranks Sergio Agüero top amongst teammates; highlighting his key involvement when on the pitch.

The Argentine scored a hat-trick in his last match against Arsenal and has 8 goals in his last 10 league appearances against the side.

Against Burnley, the 32-year-old has 6 goals in 7 appearances; scoring in all but one of his last 6 meetings with the Clarets.

Pierre-Emerick Aubameyang has played a hand in 20 goals this season (17 goals, 3 assists), with 6 goals in 8 league appearances since the change in management.

Whilst he’s yet to score against Man City, from 4 appearances, the Arsenal talisman has netted 3 times in 4 outings against Brighton.

As mentioned earlier, the plan is to activate the Bench Boost chip for Gameweek 30+, in order to take full advantage of the unlimited transfers.

He’s averaged an impressive 4.6 points per game under Arteta, earning 4 clean sheets in 10 games and averaging 3.1 saves per game.

Raúl Jiménez and Trent Alexander-Arnold remain in this draft primarily down to the team value stored in them, which will make it easier to select the wildcard squad next Gameweek.

Todd Cantwell was intended to be in the original ‘Team Selection’ for this Gameweek, prior to the announcement of unlimited transfers.

He’s a cheap way into what should be a very motivated Norwich side ahead of an important home game against Southampton, as they fight to stay in the Premier League.

It’s a little bit early to completely settle on the captaincy just yet but Kevin De Bruyne remains the early favourite.

Man City have two very winnable home games, with a high ceiling in terms of the number of goals they may score and the Belgian has rarely missed a game throughout this campaign.

BEFORE YOU GO…. There’s a massive €100,000 Fantasy Premier League contest taking part this Saturday, on Fanteam.com.

From Saturday’s 4 Premier League fixtures only, pick what you think will be the highest scoring 7-man lineup and win your share of 100K!

See our latest article here if interested in learning more about it – or, click the banner below to register and get involved.