FPLTips have 2 free transfers available but the plan is to roll the second one, in order to have more flexibility for the upcoming Double Gameweeks in 25 and 26.

The decision to sell Vladimir Coufal and instead start Cancelo backfired but it was another impressive defensive performance from Man City, with their only big chance conceded coming from the penalty spot.

Justin claimed maximum bonus points in a 0-0 draw with Wolves, as did ‘out of position’ Dallas, who teed up Jack Harrison in the 2-0 win over Crystal Palace.

There were returns all across the midfield with the exception of Soucek, who was controversially shown a red card that has since been rescinded.

But it was an off-day in general for West Ham, who managed just a single effort on target against Fulham and failed to create a big chance.

Overlooking the obvious Bruno Fernandes captaincy proved costly, after the Portugal midfielder effortlessly lifted the ball over Robin Olsen from the edge of the area.

No forward took more shots, in total (5) or on target (3) than Bamford in Gameweek 23, with the Leeds talisman netting his 12th goal of the season.

But it was a quiet afternoon for captain Antonio, who failed to take a shot in the 0-0 draw with Fulham, after averaging 3.4 shots per game in his previous 5 matches. 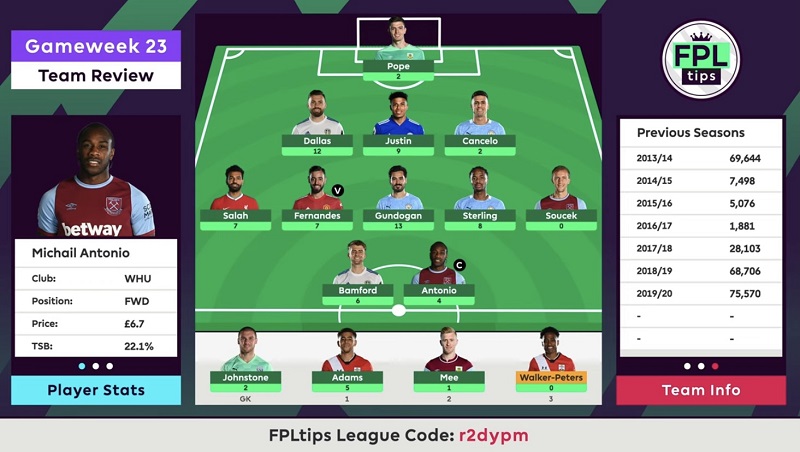 He was withdrawn after just 73 minutes and Moyes later confirmed that he was suffering from fatigue.

So, let’s move on to the transfer plans ahead of Saturday’s Gameweek 24 deadline:

The midweek FA Cup results will have repercussions for the upcoming Double and Blank Gameweeks and could inform the transfer plans.

But one way or another, Calvert-Lewin is almost certain to come in ahead of his Double Gameweek 24, after delaying the move last Gameweek.

It was initially going to be Adams who made way but now that Saints have at least one Double Gameweek on the cards, it’s tempting to keep hold of him.

With Bamford in form and also set for a Double Gameweek 25, the current plan is to sell Antonio for the Everton forward, despite a home meeting with Sheffield Utd up next. 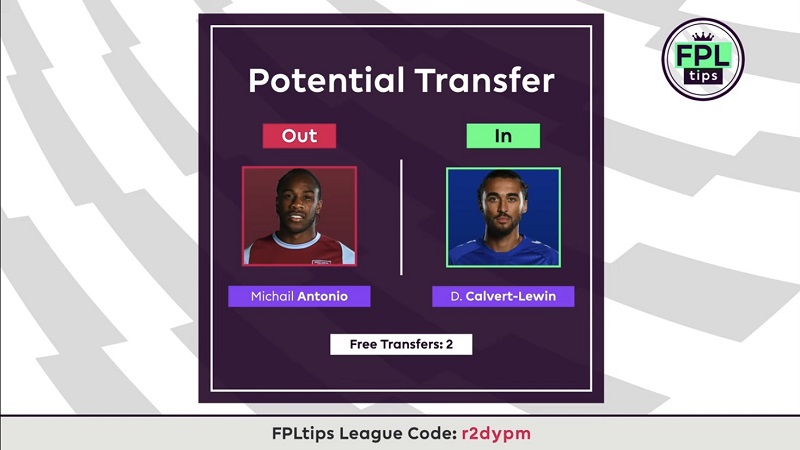 As we saw at Fulham, he seems to be suffering from fatigue and is currently a doubt for the midweek FA Cup tie with Man Utd.

There are 2 free transfers available but the plan is to roll the second one, in order to have more flexibility for the upcoming Double Gameweeks in 25 and 26.

Pope is one of six Double Gameweek players in the lineup, as Burnley travel to Crystal Palace before a home meeting with Fulham.

Mee comes into the XI after that late decision to transfer him in last Gameweek in preparation for this Double Gameweek, while Cancelo keeps his place ahead of ties with Spurs and Everton.

If Walker-Peters is available for the home meeting with Wolves, it will be an option to start him ahead of Dallas.

Wolves have scored just 2 goals in their last 4 matches, ranking joint-bottom with Fulham.

But Arsenal have only managed 4 goals in that time themselves and Dallas looks set to continue in an ‘out of position’ midfield role, with Rodrigo sidelined.

It’s set to be an unchanged midfield after Soucek won his appeal for the red card to be rescinded.

Salah was back amongst the goals but only from the penalty spot against Man City.

The Egyptian king has fired 14 shots in the last 4 Gameweeks, with only Bruno Fernandes (15) taking more amongst midfielders.

Sterling, Gundogan and Salah rank joint-top with a total of 4 big chances in that time.

Opting to sell Antonio would at least avoid having to bench the in-form Bamford, who’s averaged 6.8 points per game in the last 4 Gameweeks.

Only Watkins (15) can better his 12 shots in the box during that time, while only Calvert-Lewin (7) and Watkins (10) have landed more efforts on target than his 6. 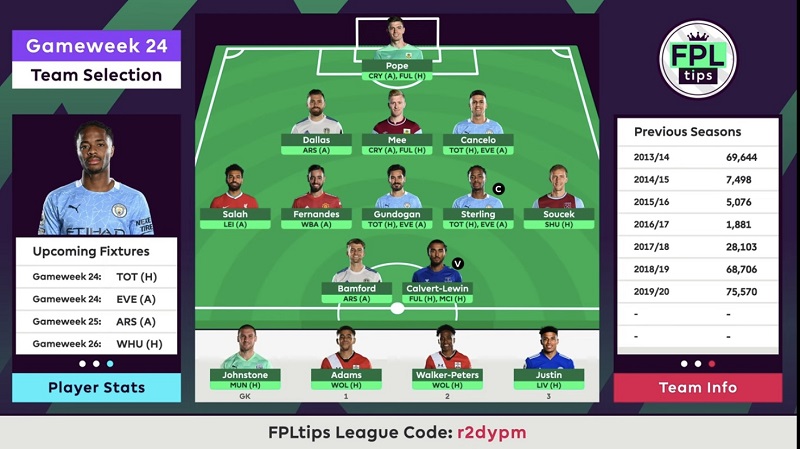 The Everton forward has back-to-back home matches against Fulham and Man City.

Bruno Fernandes takes on the league’s most porous defence but it’s hard to overlook a Double Gameweek captaincy option.

With two favourable fixtures and 5 double-digit returns to his name already this season, Pope is a genuine contender.

But, providing they get a rest in the FA Cup midweek, either Gundogan or Sterling are likely to take the armband for their higher ceiling.

The German has racked up 9 goals and an assist over the last 11 Gameweeks to average 8.4 points per game.

But Sterling has scored in each of his last three matches and has recorded an astounding 0.99 xG per 90 minutes in the last 4 Gameweeks.

The intention when bringing him in was to give him the armband in Double Gameweeks and providing he gets a rest midweek in the cup, that will remain the plan.

BEFORE YOU GO… Our official Daily Fantasy Sports Partner, FanTeam, are offering all NEW customers FREE ENTRY to this week’s Gameweek 24 Fantasy Premier League contest, which has a £11,000 guaranteed prize pool.

Simply register for your free account here, or by clicking the banner below and once you’ve signed up, you’ll automatically receive a FREE ENTRY to this Saturday’s Gameweek 24 Weekly Monster, which has a guaranteed prize pool of £9,000 – with around £1,350 going to the first place winner!

Using your 105M budget – just like FPL, pick your best 11-man squad (no subs) for Gameweek 24 only. The contest kicks off at 12:30PM GMT on Saturday the 13th of February and covers 10 Gameweek 24 matches – not including the doubles!