It was ‘job done’ for Pope in the first of his two fixtures; he made 3 saves to keep out Crystal Palace in a 3-0 win.

Mee played his part in the clean sheet but had to be taken off on a stretcher after colliding with Jordan Ayew and will now miss the meeting with Fulham due to concussion protocols.

Walker-Peters was another casualty; having only just recovered from injury, he now looks set for another spell on the sidelines.

Southampton had a comfortable first-half lead over Wolves but a controversial penalty marked the turning point that saw the game tip in favour of the away side.

There were points all across the midfield aside from Soucek, who failed to take an attempt at goal in West Ham’s 3-0 win over Sheffield Utd.

But opting for the more differential Sterling captain rather than playing it safe with Gundogan is where the ground was lost. 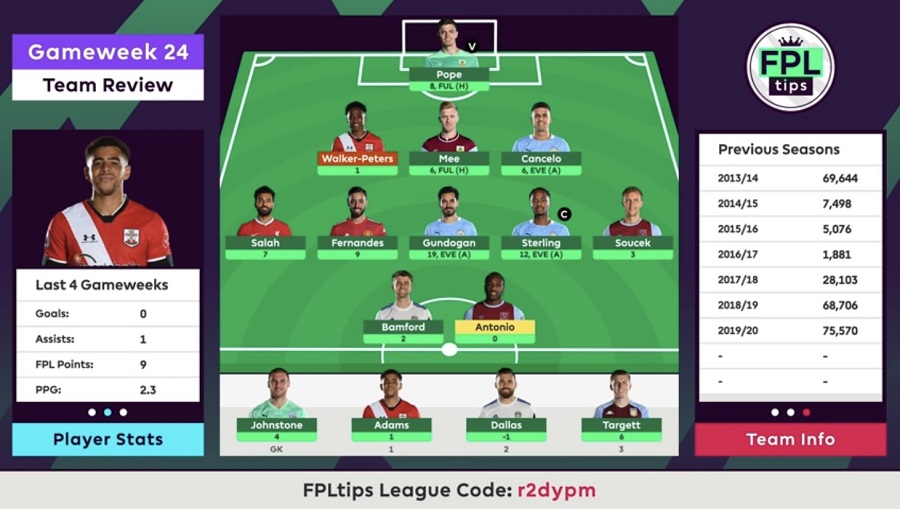 The Englishman looked bright once again, finding his fourth successive return before forcing a good save from Hugo Lloris late on.

But Gundogan absolutely stole the show, winning the penalty and continuing to make those well-timed runs into the box.

He did appear to be in some discomfort towards the end of the game, however, as he limped off clutching his groin.

There weren’t any returns amongst the forwards as Bamford was kept quiet in Arsenal’s 4-2 win over Leeds.

It made little sense to sell Antonio after Calvert-Lewin’s injury but the West Ham striker suffered a setback and also missed out, so Adams will come in with his 1-point cameo.

The Free Transfer was instead used to move on the injured James Justin to Matt Targett and in hindsight, it proved costly to leave him on the bench at the expense of Walker-Peters.

We have a Friday evening deadline to look forward to for Gameweek 25, so let’s move on to the transfer plans:

The plan is to attack the Leeds Double Gameweek and bring in the in-form Raphinha.

He’s provided attacking returns in each of the last 5 Gameweeks, to average 7.6 points per game.

Since making his first start in Gameweek 9, the Brazilian has gone on to amass 4 goals and 6 assists in 15 matches; no teammate has earned more FPL points (77) in that time. 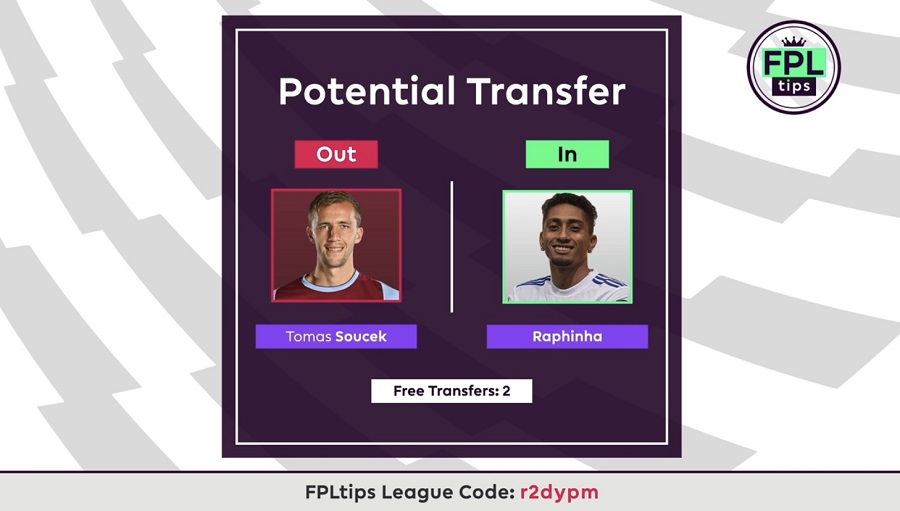 Unfortunately, that does mean Soucek will have to make way; assuming Gundogan’s injury isn’t too serious.

He’s a great player to have but the fixtures take a turn for West Ham now and those midfield spots are precious at the moment.

We’re still awaiting confirmation of the potential Doubles in Gameweeks 26, 27 and 28 but there is a chance we’ll know more before the Gameweek 25 deadline.

That news could help to decide what to do with the second Free Transfer.

Michail Antonio would likely be the man to leave, if anyone else, due to poor fixtures and his injury situation.

At the moment, though, Che Adams will be starting ahead of him anyway, so there’s less urgency to sell.

If Southampton get a Double Gameweek 26, it would be harder to ignore Danny Ings. 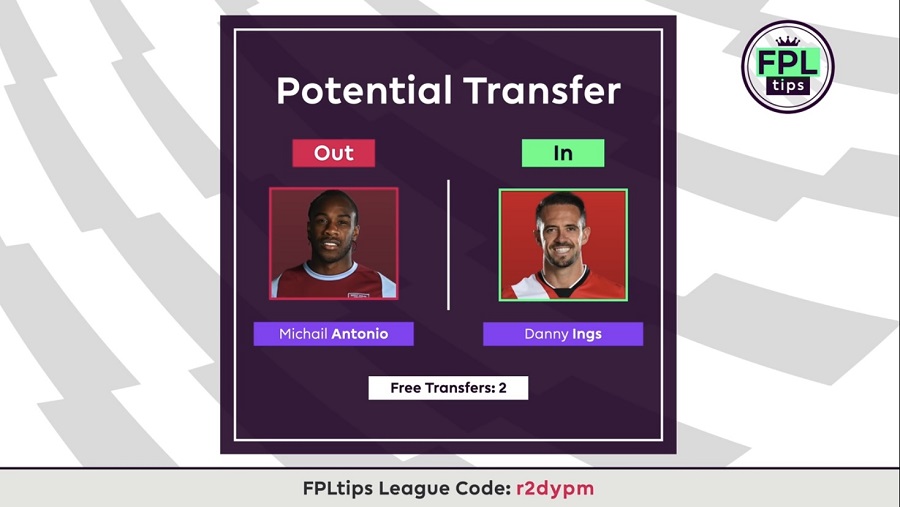 Though that would mean potentially having to bench Adams, unless Gundogan’s groin issue turns out to be more serious than expected.

If Saints don’t get an immediate, additional Double Gameweek, then Ollie Watkins is on the radar as a potential target.

Loading up on Villa assets seems like a good plan, given they’re likely to have a couple of Double Gameweeks soon and could also get a game rescheduled in Blank Gameweek 29.

But we’ll leave that second transfer until further news and here’s how the team is set to line-up:

Pope faces a West Brom side that have started to show some fight; managing to score in 3 of their last 4 matches.

The Baggies have racked up 8 big chances in that time; only 7 teams have fashioned more.

All being well, Mee will be available for West Brom’s visit to Turf Moor, after adhering to the concussion protocols.

Walker-Peters looks set to miss out on Southampton’s Double Gameweek but there should be plenty of cover.

With him fit, it would have been Cancelo who had to miss out and given City’s current defensive form, there’s a good chance that would have backfired.

Their opponents Arsenal have recorded just 4 big chances in their last 4 matches; only Crystal Palace and Aston Villa (each 3) have had fewer.

Dallas faces a Wolves side that have scored just 4 goals in their last 4 matches and a Southampton side that have netted just 3; only Spurs (2) have managed fewer.

Salah faces an Everton side that have shipped 8 goals in their last 4 matches; only Southampton (15) and Liverpool themselves (9) have conceded more.

No side have fashioned more big chances than Man City (13) during the same timeframe, but Gundogan could be a doubt with that groin injury, while Sterling always carries a risk of rotation.

Bruno Fernandes has scored in each of his last three matches and only Gundogan has earned more points in that time (40 to 33).

No player can better his 13 shots or his 7 efforts on target.

His second fixture of the Double Gameweek comes against an out-of-form Southampton side that have conceded a league-high 15 goals in the last 4 Gameweeks. 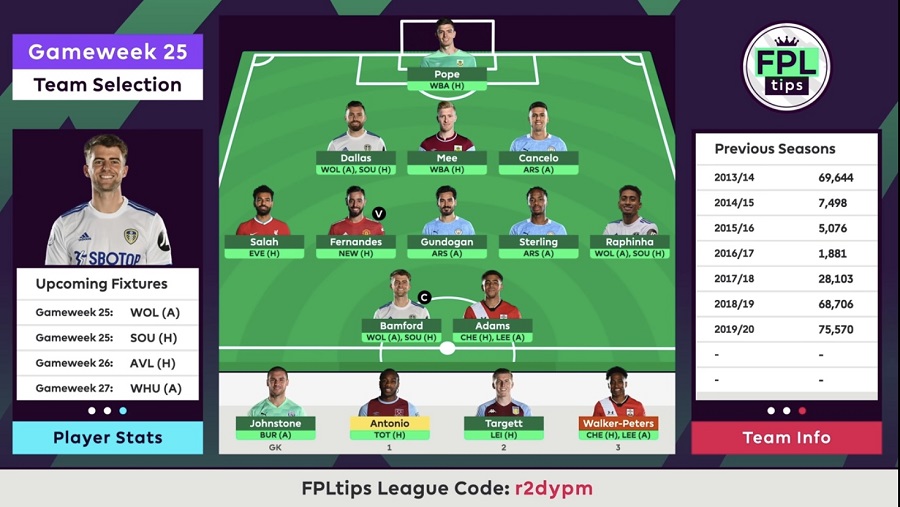 Adams appears to have lost his place in the Southampton starting XI but should get gametime across the two matches against Chelsea and Leeds.

He still ranks top amongst teammates for big chances in the last 4 Gameweeks – with 4; one more than Danny Ings has had.

Although Bruno Fernandes should be considered for the armband amongst single Gameweek players, it’s always more tempting to back a player with two matches.

Therefore, it comes down to a choice between Bamford and Raphinha.

In the last 6 Gameweeks, its actually the midfielder who has scored the most points (40 to 31).

So, there’s a small edge there for the forward; that, along with his penalty duties and higher ownership, is why he will take the armband.

BEFORE YOU GO… Our official Daily Fantasy Sports Partner, FanTeam, are offering all NEW customers FREE ENTRY to this week’s Gameweek 25 Fantasy Premier League contest, which has a £11,000+ guaranteed prize pool.

Simply register for your free account here, or by clicking the banner below and once you’ve signed up, you’ll automatically receive a FREE ENTRY to this weekend’s Gameweek 25 Weekly Monster, which has a guaranteed prize pool of £11,000+ – with around £1,500 going to the first place winner!

Using your 105M budget – just like FPL, pick your best 11-man squad (no subs) for Gameweek 25 only. The contest kicks off at 15:00PM GMT on Saturday the 20th of February and covers 8 Gameweek 25 matches only.