Manchester City’s Kevin de Bruyne makes his way in to FPLTips’ lineup for Double Gameweek 27, but will he wear the captains armband?

The ‘biggest Double Gameweek in history’ held so much promise but it’s safe to say things haven’t quite gone to plan.

The only significant points in defence came from a Matt Targett clean sheet and that’s where a lot of ground has been lost, with popular picks such as Martinez, Dias and Stones all getting good returns.

It’s been a disappointing week for the big hitters in midfield too so far, with Bruno Fernandes looking a bit leggy in United’s two goalless draws.

He was especially quiet against Crystal Palace on Wednesday night, where he failed to take a single shot.

A late change of plan saw Harvey Barnes come in for Sterling; who, fortunately, didn’t punish too much after the Leicester midfielder suffered a knee injury in his first match. 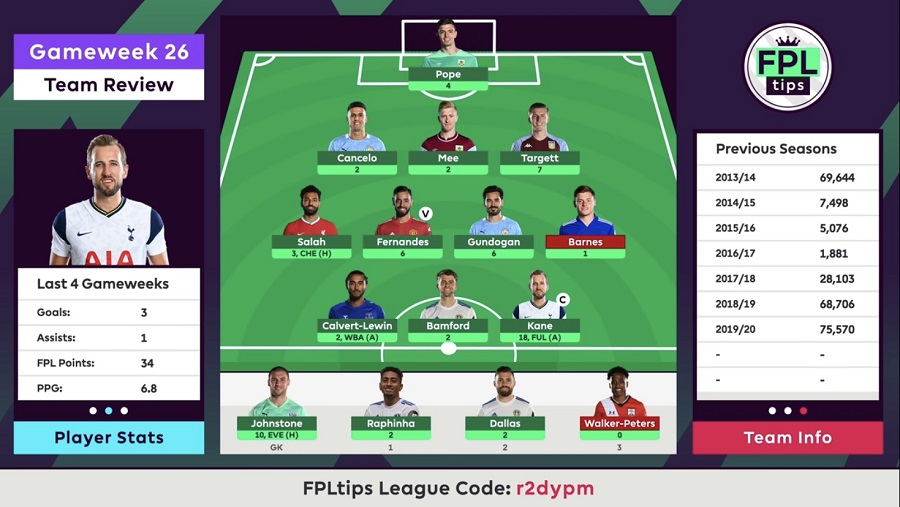 The thinking behind the late switch was that Sterling would likely be rested after starting in the Champions League and there was so much traffic towards Kane as the deadline neared, that going without him seemed far too risky.

The England captain was unfortunate to only come away with one goal in the 4-0 win over Burnley, taking 5 shots and missing a big chance right at the end.

Calvert-Lewin was kept quiet in the narrow 1-0 win over Southampton but, like Kane and Salah, he still has his second fixture to come.

Just to make matters worse, Johnstone is sitting on the bench with a huge score, after Brighton missed two penalties and had a goal controversially disallowed against the Baggies.

So, let’s take an early look at the transfer plans ahead of Saturday’s Double Gameweek 27 deadline:

After selling Sterling last week, the plan is to bring in a third Man City player ahead of their Double Gameweek 27.

It may also be worth spending 4 points to make a second transfer to increase the number of Blank Gameweek 29 players in the team.

Dias and Stones remain options but there’s still the ongoing threat from Laporte and even though it’s primarily been Stones who’s suffered up until now, bringing either of them in at this point feels like tempting fate.

So, it’s actually Kevin De Bruyne who is the most likely to come in.

The plan is to play the Wildcard soon after Gameweek 29, so it’s only really a short-term buy, for the next two Gameweeks.

Of course, there’s still the possibility of rotation with him but I think it’s a risk worth taking, given his potential for big returns.

Most managers will already have their three Man City players locked in place, so I’d expect De Bruyne’s ownership to stay fairly low.

Heung-Min Son is also in the thinking but the South Korean may have to wait until Gameweek 29, with the Man City Double Gameweek taking priority. 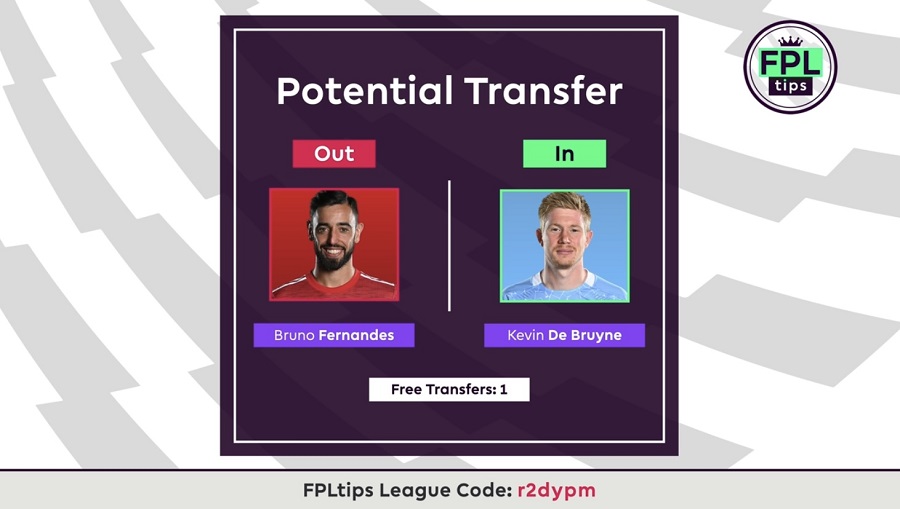 The biggest concern with the move is that it involves being without the 60%-owned Bruno Fernandes for the next two Gameweeks, losing a fair bit of team value in the process.

United were the only side not to create a single big chance during Double Gameweek 26 and their last three matches in all competitions have ended in 0-0 draws.

You’d expect that trend to continue against an in-form Man City side and then it’s a meeting at home with 4th-placed West Ham.

To fund that move, while also increasing the number of Blank Gameweek 29 players, Nick Pope could be the man to make way.

Burnley have some tough fixtures to come against Arsenal and Everton.

Emi Martinez is the target to come in for a hit, with upcoming fixtures against Wolves, Newcastle and Fulham and the potential for a Double Gameweek 28.

There’s never a good time to make a goalkeeper transfer and arguably, that’s a move that should have been made a few weeks back but I still think it could pay off over the next 4 Gameweeks.

Martinez has three double-figure returns in the last 6 Gameweeks, where he’s averaged 7.0 points per game.

As mentioned, the plan is to bring in the Argentine this week but alternatively, Johnstone could be an option to play ahead of Nick Pope, up against an injury-stricken Newcastle.

Following his rest against West Ham, there’s perhaps a greater chance of Cancelo featuring from the off in both of Man City’s Double Gameweek 27 fixures.

Targett will keep his place ahead of Villa’s home meeting with Wolves, who’ve fashioned just 3 big chances in the last 4 matches; only Man Utd (2) and Crystal Palace (1) have managed fewer.

For now, lining up alongside them is Dallas, who often gets minutes in midfield to aid his attacking potential; only Lowton (6) and Cancelo (7) have taken more than his 5 shots from open play in the last 4 Gameweeks, amongst defenders.

However, Walker-Peters has returned to training and could be in contention for the trip to Sheffield Utd in the first of two Southampton fixtures this Gameweek.

The Blades have scored just once in their last 4 matches, despite recording 7 big chances.

Even though it’s hard to see him earning many points against Man City, it would still be tempting to start the right-back if he looks like making a return.

With Harvey Barnes sidelined, Raphinha comes into the XI for the trip to West Ham.

The plan is to sell the Leicester midfielder either in Gameweek 28 or 29, making use of the Brazilian in the meantime.

He’s fired 14 shots in the last 4 Gameweeks, with only Neto (15) taking more amongst midfielders.

Salah hasn’t been overly convincing of late, managing 4 goals in 10 matches this calendar year to average 4.4 points per game. 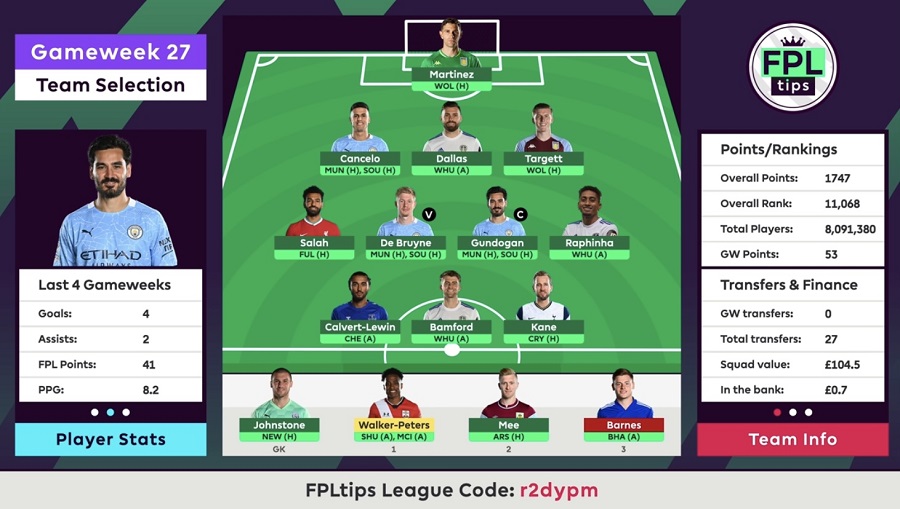 But the Egyptian is likely to keep his place ahead of Bruno Fernandes due to a more favourable matchup this Gameweek.

Fulham’s form has improved of late but they’ve conceded in all 4 matches against the ‘big six’ during this calendar year.

Gundogan earned a late assist from the bench against Wolves on Tuesday and should be well-placed for minutes in Double Gameweek 27.

But over the 3 matches, the fit-again De Bruyne has averaged 3.3 shots per 90 minutes compared to Gundogan’s 1.4.

He’s also edged the German for touches in the penalty box with 4.4 compared to 3.9.

Calvert-Lewin faces a Chelsea side in strong defensive form under Tuchel but boasts an impressive record against the ‘big six’ this season.

He’s delivered in all 7 appearances against those sides, amassing 3 goals and 5 assists, to average 6.3 points per game.

Bamford has taken 11 shots in the box over the last 4 Gameweeks, to rank joint-top amongst forwards with Jesus and Kane.

The England captain faces a Crystal Palace side that kept back-to-back clean sheets last Gameweek but have allowed 12 big chances in their last 6 matches, with only five teams faring worse.

Ordinarily, Kane and Salah would be contenders for captaincy but Man City’s Double Gameweek ensures it will come down to a choice between Gundogan and De Bruyne.

The Belgian has the advantage when it comes to underling numbers per 90 minutes, over the last 3 matches, since making his return from injury.

But there’s the temptation to try to predict their game time over the two matches and while De Bruyne played every minute in Double Gameweek 26, Gundogan had his minutes managed more carefully.

So, for now, the armband is with the German.

BEFORE YOU GO… Our official Daily Fantasy Sports Partner, FanTeam, are offering all NEW customers FREE ENTRY to this week’s Gameweek 27 Fantasy Premier League contest, which has a £11,000+ guaranteed prize pool.

Simply register for your free account here, or by clicking the banner below and once you’ve signed up, you’ll automatically receive a FREE ENTRY to this weekend’s Gameweek 27 Weekly Monster, which has a guaranteed prize pool of £11,000+ – with around £1,500 going to the first place winner!

[This offer is strictly 18+ only and as always. BeGambleAware.org