The Premier League fixtures are coming thick and fast in the world of Fantasy Premier League, so let’s take a look at how the FPLTips team performed in Gameweek 22 and what plans they have for this weekend’s Gameweek 24 action.

The dilemma between goalkeepers Johnstone and Pope came to nothing in the end; both conceded twice and made 4 saves.

Justin finished off an impressive team goal after bursting into the box and rounding the goalkeeper.

Man City kept their 6th consecutive clean sheet in a 2-0 win over Burnley, which saw Cancelo withdrawn just after the hour-mark.

Captain Mo Salah was the only player without a return across the midfield; he missed both of Liverpool’s 2 big chances against a resilient Brighton defence.

Bruno Fernandes benefitted from two Southampton red cards, which saw United go on to put 9 goals past the visitors.

No FPL midfielder has taken more than his 6 shots during the Gameweek so far. 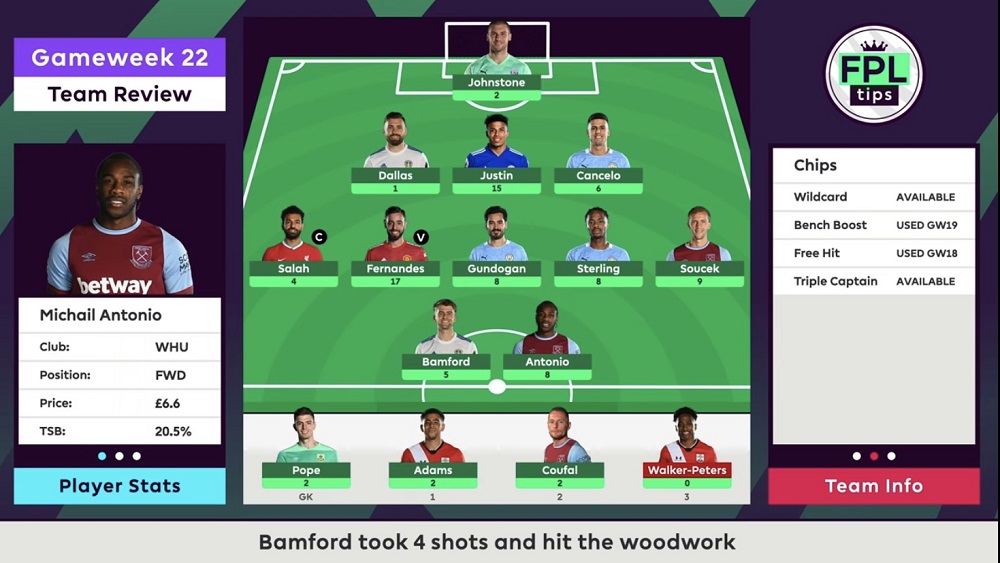 Gundogan and Sterling linked up for Man City’s second against Burnley and combined on two other occasions to draw saves from Nick Pope.

Soucek opened the scoring against Villa with his 8th goal of the season, taking a total of 4 shots in the box; the most of any midfielder in Gameweek 22 as it stands.

Antonio set up both of Jesse Lingard’s debut goals and took a total of 5 shots himself, with one of his efforts cleared off the line by Tyrone Mings.

Bamford set up Raphinha’s goal and later clipped the top of the crossbar after connecting with a Dallas cross.

So, let’s move on to the transfer plans ahead of Saturday’s Gameweek 23 deadline:

With 2 free transfers available, there is the temptation to look at Heung-Min Son for his home meeting with West Brom but it would have to be Salah or Sterling who made way.

So, for now, the plan is to instead target Everton assets in hope that they get the Double Gameweek 24 – though as of yet, there hasn’t been official confirmation.

Calvert-Lewin got back amongst the goals against Leeds and should have added a second late on after going one-on-one with the keeper. 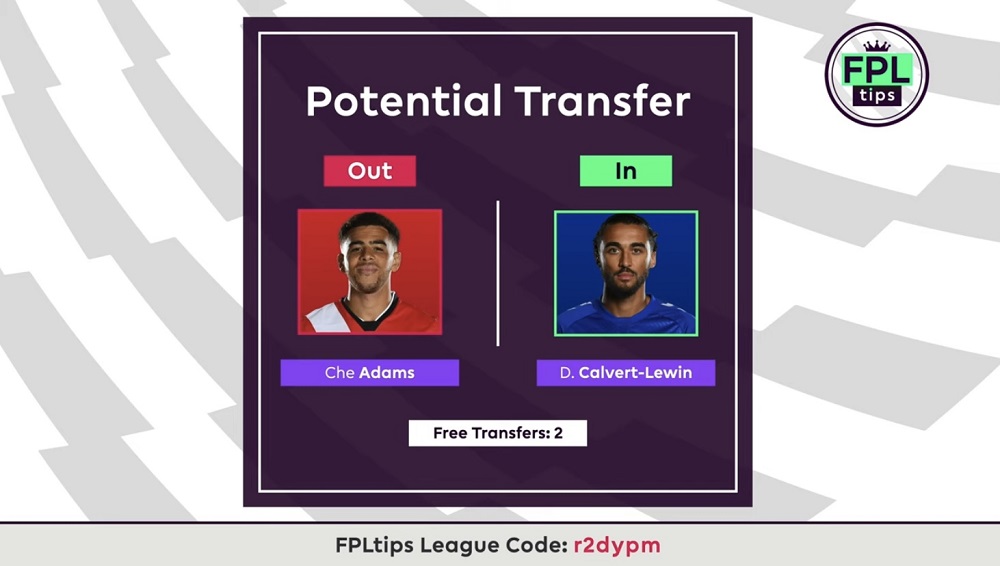 Che Adams was unfortunate to see his goal chalked off by VAR against Man Utd for a marginal offside but his form generally has been poor for a while now.

That move would leave just enough cash in the bank to upgrade Walker-Peters to Lucas Digne next Gameweek, providing Everton do indeed get that Double Gameweek.

There’s still a chance that Southampton get it instead but with Walker-Peters injured and Adams out of form, there’s less risk in selling them.

Pope comes back in between the sticks ahead of Brighton’s visit to Turf Moor.

The Seagulls earned an impressive 1-0 win over Liverpool midweek but have scored just 3 goals in their last 4 matches; only Southampton (1) have managed fewer.

There are a couple of bench dilemmas this week and with favourable fixtures for each of the three available budget defenders, it’s Cancelo who may have to miss out.

It doesn’t feel right to bench him on the back of 6 consecutive clean sheets for Man City, while Liverpool have hardly been prolific in front of goal at Anfield of late.

But Coufal faces a Fulham side that have managed just 3 goals in their last 4 matches.

Justin is up against a Wolves side with just 4 goals in that time; two of which came against Arsenal after David Luiz was sent off.

Dallas has started each of the last three matches in a midfield role and faces a Crystal Palace side that have fashioned just 4 big chances in their last 4 matches; only Sheff Utd and Burnley (each 3) have created fewer.

With 3 goals in 3 games and a trip to Fulham up next for Soucek, it’s hard to leave him out of the XI.

Over the last 4 Gameweeks, only Fernandes and Barnes (each 6) have landed more than his 5 shots on target amongst midfielders.

Big hitters Salah, Fernandes and Sterling keep their places and so it’s reluctantly Gundogan who drops to the bench.

Sterling has racked up 2.28 xG in the last 4 Gameweeks to rank 2nd only to Mane (2.35) amongst midfielders.

There is the option to bench a forward in favour of either Gundogan or Cancelo and on paper, it would have to be Calvert-Lewin who missed out.

Man Utd have shipped just 3 goals in their last 4 matches and only Brighton (2) and Man City (1) have conceded fewer big chances than their 3.

Bamford faces a Crystal Palace side that have conceded 8 goals in their last 4; only West Brom (11) and Southampton (15) have fared worse. 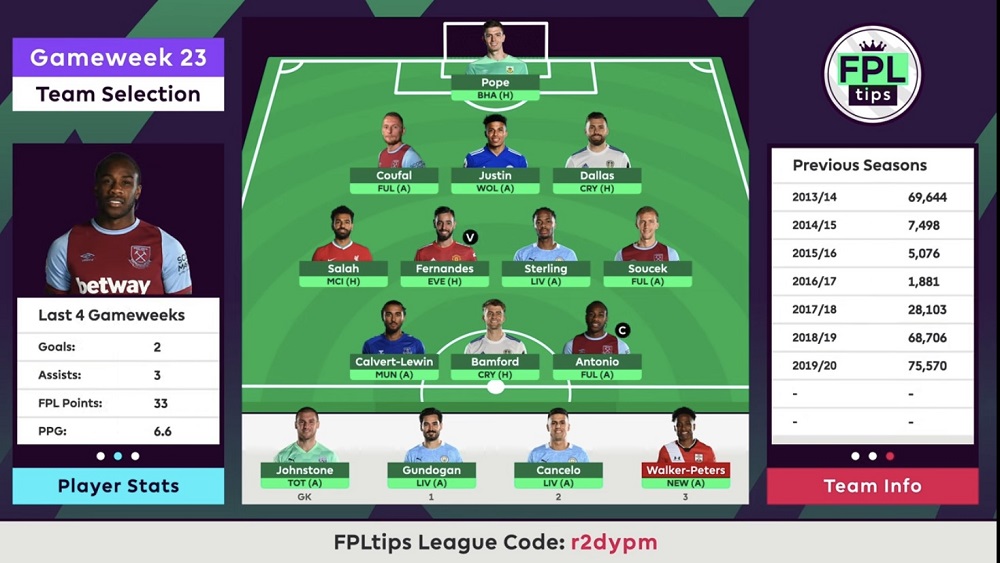 Over the last 4 Gameweeks, no forward has had more big chances than Antonio – with 5.

Fulham have shipped 6 goals in their last 4 matches but have allowed opponents 10 big chances; again, only Southampton (16) have faced more.

With no Heung-Min Son and a hard-to-call clash between Liverpool and Man City, Bruno Fernandes by default should probably get the armband.

But Everton haven’t been that poor defensively; they’ve only conceded 5 goals and 6 big chances in their last 4 matches.

So, it’s tempting to take a punt on the in-form Antonio, up against a struggling Fulham side with no wins in their last 11 matches.

The West Ham forward has racked up a league-high 2.87 xG over the last 4 Gameweeks.

BEFORE YOU GO… Our official Daily Fantasy Sports Partner, FanTeam, are offering all NEW customers FREE ENTRY to this week’s Gameweek 23 Fantasy Premier League contest, which has a £11,000 guaranteed prize pool.

Simply register for your free account here, or by clicking the banner below and once you’ve signed up, you’ll automatically receive a FREE ENTRY to this Saturday’s Gameweek 23 Weekly Monster, which has a guaranteed prize pool of £9,000 – with around £1,000 going to the first place winner!

Using your 105M budget – just like FPL, pick your best 11-man squad (no subs) for Gameweek 20 only. The contest kicks off at 15:00PM GMT on Saturday the 6th of February and covers 9 Gameweek 23 matches.