The solid start to the season for FPLTips continues with a score of 74 points in Gameweek 2, which sees the rank move down just 635 places.

It was just Lucas Digne who let the side down at the back, with Sanchez and Alexander-Arnold keeping clean sheets.

The Liverpool right-back collected all three bonus points after creating 7 chances against Burnley, including the assist for Sadio Mané.

Vladimir Coufal earned his first assist of the season as well and was unfortunate to lose the clean sheet after 10-man Leicester scored with their only effort on target of the game. 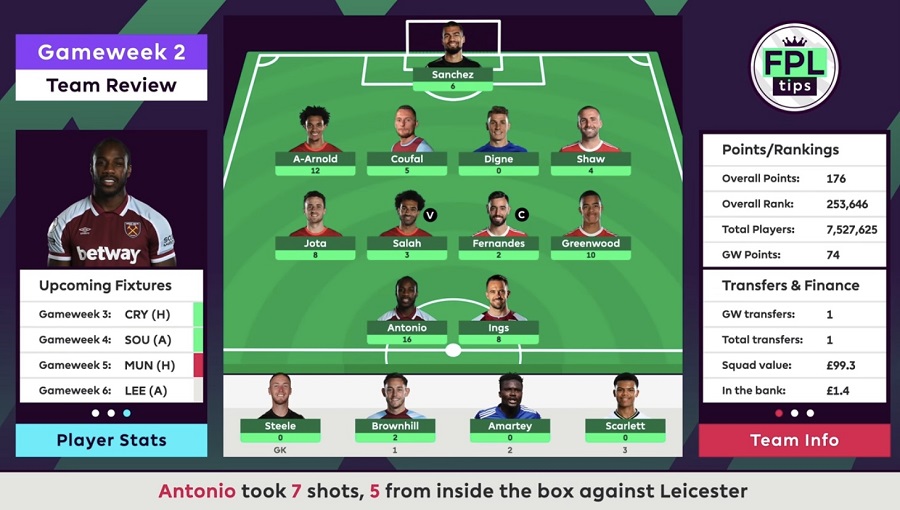 Surprisingly, it was the two big hitters who failed to deliver in midfield; the goals instead coming from Diogo Jota and Mason Greenwood.

Mo Salah has now failed to score against Burnley in seven successive matches, seeing his goal ruled out for a marginal offside on this occasion.

The strong start from Antonio and Ings continued, with both forwards on the scoresheet for a second week running.

So, let’s move on to the transfer plans ahead of Saturday’s Gameweek 3 deadline.

One transfer has already been confirmed and it’s Diogo Jota who is unfortunate to make way.

An early punt on the ‘out of position’ midfielder has gone well – with 2 starts and 2 goals – but that’s been partially undermined by the fact that Kostas Tsimikas has outscored him by one point.

With Firmino remaining a threat to his gametime and a tough Chelsea defence up next, now seems like a good moment to take the points and run.

Said Benrahma has earned back-to-back double-figure returns and is hard to resist ahead of fixtures against Crystal Palace, Southampton and Leeds in the next four Gameweeks.

He trails only Antonio for FPL points after the first two Gameweeks (29 to 24) and ranks amongst the top three midfielders for expected goals (1.01); only behind Sadio Mané (1.10) and Adama Traoré (1.48). 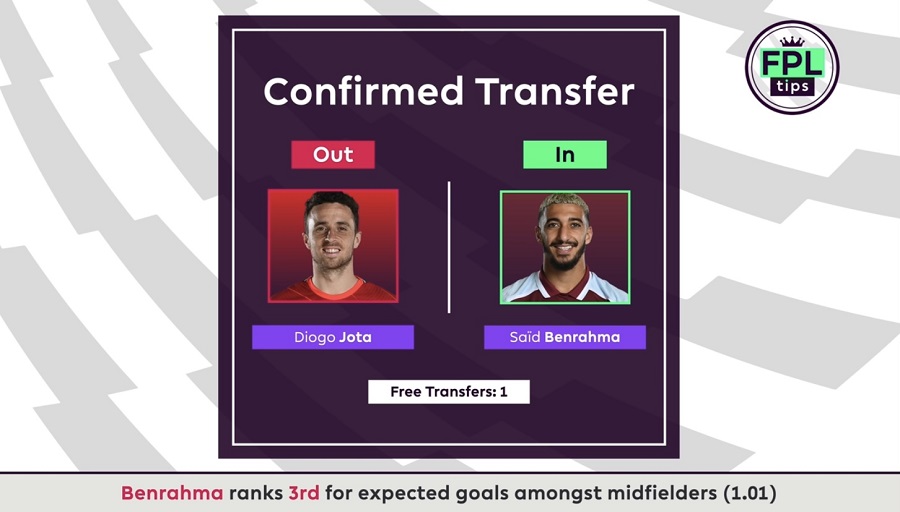 There is a second free transfer available but the plan is now to bank that one, after the positive update regarding the quarantine situation following international break.

The Athletic yesterday reported that Liverpool don’t intend to release Mo Salah to play for Egypt against Angola.

They went on to say that the position of the European Club Association is that no players will be released for international duty if they would have to quarantine on their return to the UK.

That news was also a factor in deciding to sell Diogo Jota this week, who would have been a sure starter in Gameweek 4 – if Liverpool were to lose players to quarantine.

So, with all that mind, here’s how the team is set to line up for Gameweek 3.

Robert Sanchez didn’t face a single shot against Watford last Gameweek but could be in for a tougher ride against the Toffees.

They’ve landed 14 efforts on target so far this season, with only West Ham (16) and Liverpool (17) managing more.

This looks to be a good week for the big four defenders and it’s even hard to leave out Daniel Amartey – should he retain his starting place against Norwich.

Liverpool face their toughest test yet – a Chelsea side with a certain Romelu Lukaku leading the line – but Alexander-Arnold has created a league-high 10 chances so far.

Only Vladimir Coufal can equal his 2 big chances created amongst defenders.

West Ham face a Crystal Palace side that have taken the fewest shots this season (11) and rank joint-bottom for big chances – mustering up just one.

Everton are yet to keep a clean sheet and Lucas Digne therefore is on thin ice but upcoming fixtures against Brighton, Burnley, Aston Villa and Norwich mean he’ll get the chance to redeem himself.

The Seagull’s rank seventh for expected goals so far (2.96) but could be without first-choice striker Neal Maupay – who was forced off at half-time with a shoulder injury against Watford.

Despite failing to keep a clean sheet in their opening two matches, Man Utd rank third-best for expected goals conceded (1.29); only bettered by Man City (1.13) and Chelsea (0.67).

There’s just the one change in midfield, with Said Benrahma coming in to face a Crystal Palace defence that shipped three goals to Chelsea in their last away match.

The Hammers have produced a league-best expected goals figure of 5.52 so far.

The two big hitters have each struck 4 shots on target; trailing only Sadio Mané – with 5. 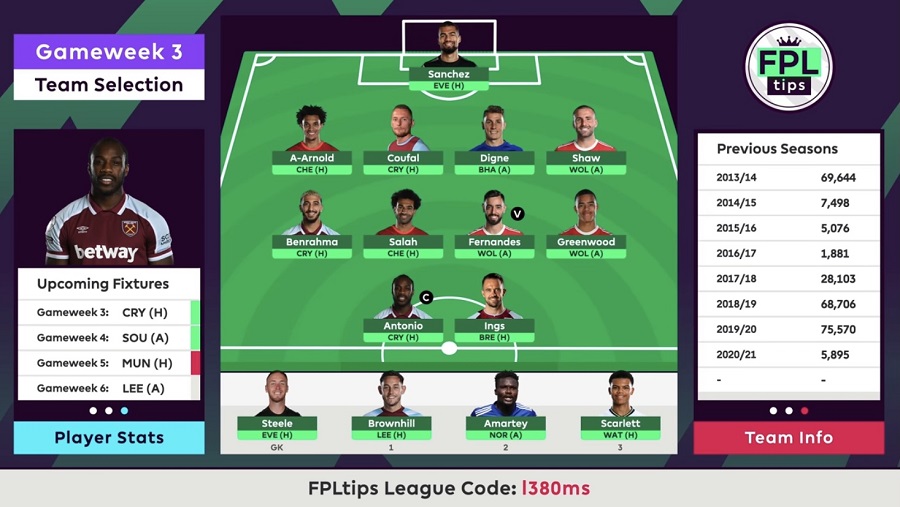 But Chelsea have kept clean sheets in both of their opening matches, while recording the lowest expected goals conceded figure (0.67).

8 shots by Mason Greenwood can only be bettered by Mané (9), Salah and Adama Traoré (each 10), amongst midfielders.

Wolves are yet to keep a clean sheet and have faced 11 efforts on target so far, with only Burnley (14) and Leeds (16) faring worse.

Michail Antonio has landed 6 efforts on target in the opening two matches, with only Calvert-Lewin able to match that tally.

Danny Ings has taken just 3 shots to score his 2 goals; a penalty against Watford and a stunning bicycle kick to open the scoring against Newcastle.

His opponent Brentford are yet to concede a goal but have faced fairly toothless Arsenal and Crystal Palace sides.

With Salah up against a resilient Chelsea defence, it’s tempting to look elsewhere for captaincy options.

Bruno Fernandes – away to Wolves and Michail Antonio – at home to Crystal Palace – are both very worth candidates.

Neither opponent have had great starts under their new managers, sitting in 16th and 14th respectively.

Wolves ranked 10th for goals conceded at home (25) last season – and that was without the support of their fans.

So, you’d fancy Michail Antonio to extend his impressive start – he takes the armband as things stand.

BEFORE YOU GO… Our official Daily Fantasy Sports Partner, FanTeam, are offering all NEW customers a FREE ENTRY to this weekend’s Gameweek 1 Fantasy Premier League contest, which has a £12,500+ guaranteed prize pool.

Simply register for your free account here, or by clicking the banner below and once you’ve signed up, you’ll automatically receive a FREE ENTRY to this weekend’s Gameweek 1 Weekly Monster, which has a guaranteed prize pool of £12,500+ – with around £1,500 going to the first place winner!

NO DEPOSIT or card details are required but this game is strictly 18+ only – simple join FanTeam via this link here, or by clicking the banner below and as a welcomed reader of our site, you’ll receive a free entry.

Using your 105M budget – just like FPL, pick your best 11-man squad (no subs) for Gameweek 1 only – imagine you are playing your Free Hit chip. The contest kicks off at 15:00PM GMT on Saturday the 28th of August and covers 9 Gameweek 1 matches only.