Good day to all Fantasy Premier League managers and after what has been an unwanted and lengthy international break, it’s great to be back!

Let’s cast our minds back to before the international break, where a score of 53 points (-4) saw a small drop down to 9,752 for the FPLTips team.

It always looked a bit bleak at the back, with a tough matchup for Aston Villa against Spurs; in the end Martinez and Targett picked up just 1 point between them.

An extra hit for a Brighton defender, specifically Joël Veltman, would have paid off.

But instead, it was Bale and Lookman who came in for a 4-point hit and collectively, they only added 1 point.

That was largely down to the Spurs midfielder not playing a single minute, after Mourinho made some big changes to his side, following their shock Europa League exit. 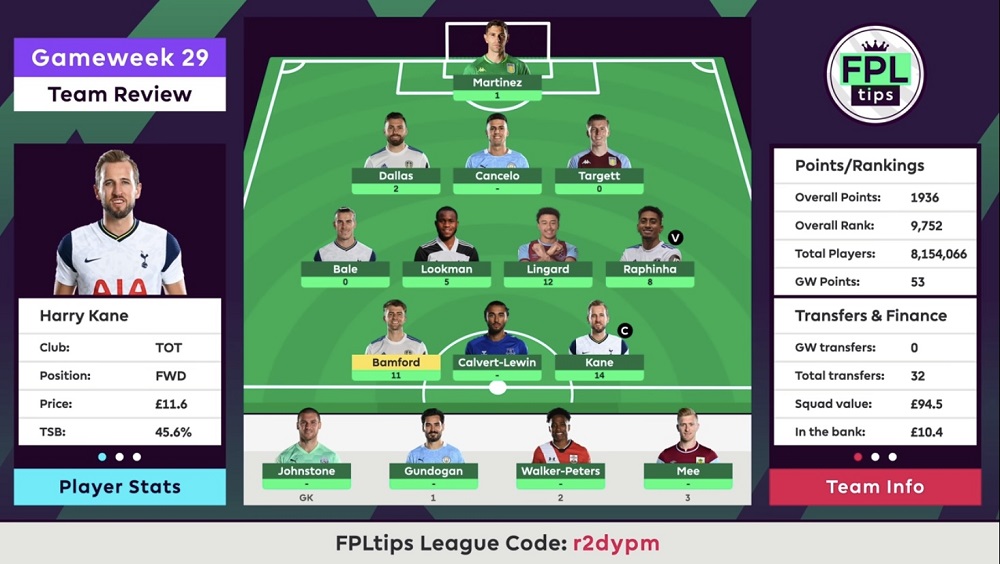 No midfielder attempted as many assists as Lookman (5) during the Gameweek, while only Soucek took as many as his 4 shots in the box.

Lingard maintained his impressive start for West Ham with an early goal and assist in what ended up being a 3-3 draw with Arsenal, while Raphinha slotted in from close range to secure a 2-1 win over Fulham.

In addition to his 2 shots, the Brazilian racked up 4 attempted assists, with only Lookman and Antonio (5) producing more during the Gameweek.

Both forwards on display were amongst the points, with Bamford opening the scoring for Leeds before putting one on a plate for Raphinha, while Kane converted a penalty he’d won himself.

So, let’s take a look at the transfer plans ahead of Saturday’s Gameweek 30 deadline:

As regular viewers will know, the plan is to play the wildcard in Gameweek 31.

So, ordinarily, this would be a good time for a one-week punt; perhaps on a Chelsea asset – at home to West Brom.

Unfortunately, it’s set to be a much more dull use of the free transfer.

Having recently sold Bruno Fernandes, it was always the plan to get him back in ahead of his home meeting with Brighton.

The Seagulls have conceded just 6 goals in their last 6 matches, with only Chelsea restricting opponents to fewer big chances (1 to 4), which suggests they won’t be heavily beaten. 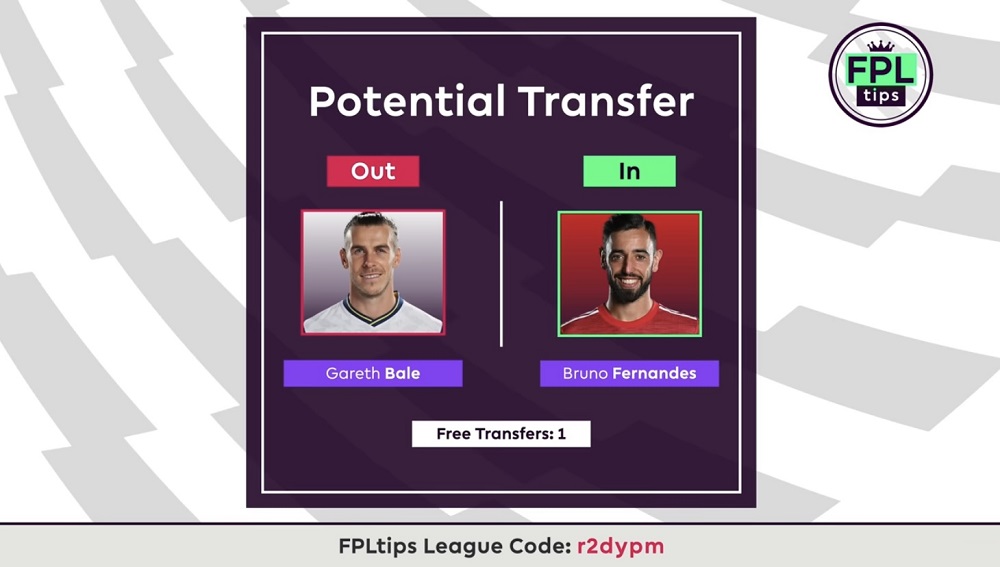 But the Portuguese midfielder has averaged 7.3 points per game against the ‘bottom six’ this season, with 5 goals and 4 assists in 9 matches.

With 10.4m in the bank, it would be possible to sell Lookman or Lingard but with uncertainty over his starting place, it’s likely to instead be Gareth Bale making way.

The wildcard can then be used next Gameweek to potentially bring in Heung-Min Son ahead of Tottenham’s now confirmed Double Gameweek 32.

Their opponents Fulham have scored just 3 goals in that time, with only West Brom (2) and Sheffield Utd (1) managing fewer.

With favourable fixtures across the backline, it’s tough to leave anyone out.

Only four defenders have attempted more assists than Targett (8) in the last 6 Gameweeks.

Walker-Peters faces a Burnley side that have scored just 10 goals on the road this season; only Sheffield Utd (6) have fared worse.

The Blades travel to Leeds in Gameweek 30, making Dallas an appealing option on the back of his 4.7 points per game average, across his last 6 matches.

There’s always the risk of rotation with Cancelo and the full-back has featured heavily for Portugal over the international break.

Gündogan has started both games for Germany so far and is set to start their third and final match, as captain.

But if Guardiola does decide to rest his internationals, Lingard and Lookman are on the bench, ready to come.

In the last 4 Gameweeks, Raphinha and Bruno Fernandes have each produced 11 attempted assists; trailing only Lookman and De Bruyne – each on 12.

Sheffield Utd have conceded league-high tallies of 9 goals and 19 big chances in their last 4 matches, boosting the appeal of both Leeds attackers.

Bamford has racked up 4 goals and 4 assists across his last 10 league matches; averaging 5.2 points per game.

Calvert-Lewin was on the scoresheet against Burnley in his last Premier League outing, before netting a brace for England on international duty. 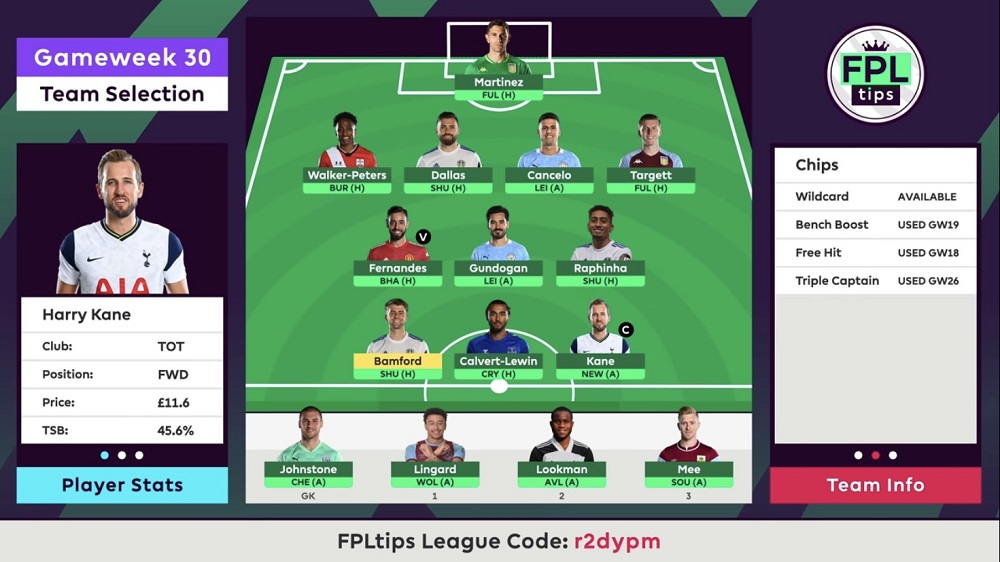 Only Kane (5) and Iheanacho (7) have recorded more than his 4 big chances in the last 4 Gameweeks.

The Spurs talisman has 4 goals and 2 assists during that period, averaging 7.2 points per game.

He’s up against a Newcastle side that have conceded 24 goals in 14 matches during this calendar year, with only Southampton (32) shipping more.

It looks set to be a choice between Kane and Fernandes for the armband.

We’ll take a look at the numbers in closer detail later in the week with the ‘Captaincy Picks’ video but currently, it’s the Englishmen who gets the nod.

Newcastle have allowed 13 big chances in that time – compared to the Seagull’s 4 – shipping 10 goals in the process; only Southampton (12) and Sheffield Utd (13) have conceded more. 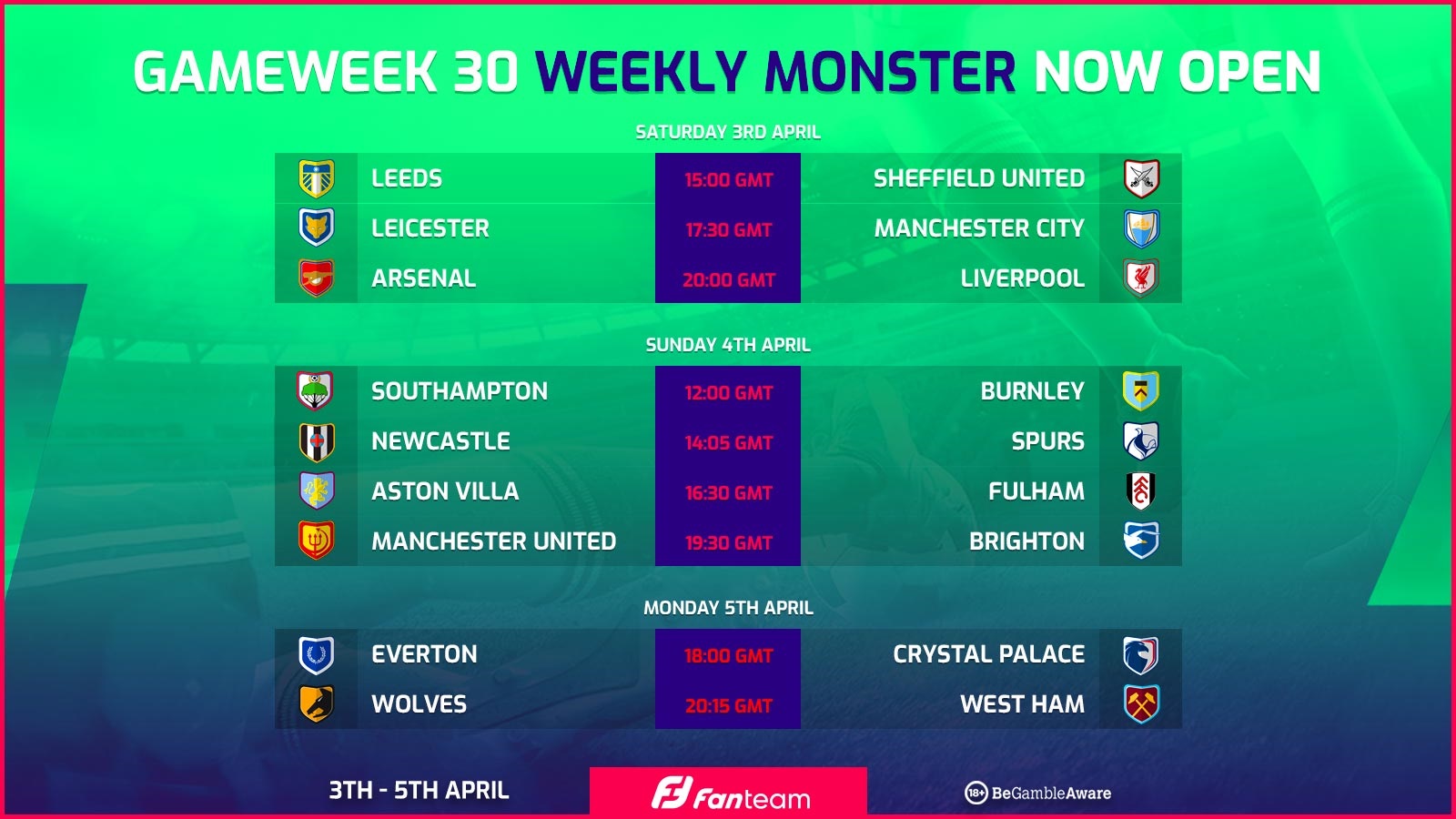