The Wildcard is active for the FPLTips team ahead of Gameweek 31, but which players are they looking to ditch and recruit before Friday’s early deadline?

There was so much promise at the back on paper but it all amounted to very little.

Martínez was heading for one of his famous double-figure returns until a mistake by Tyrone Mings invited Mitrovic to get on the scoresheet.

Dallas went close with an effort that curled towards the top corner but only clipped the frame of the goal.

Pep rotation struck once again, with Cancelo missing out and Walker-Peters came in to replace him.

The Saints right-back was unfortunate to give away an early penalty after appearing to have first been fouled himself and was later denied an assist for a through ball that led to Danny Ings’ goal, with Nathan Redmond judged to have made contact with his dummy in-between. 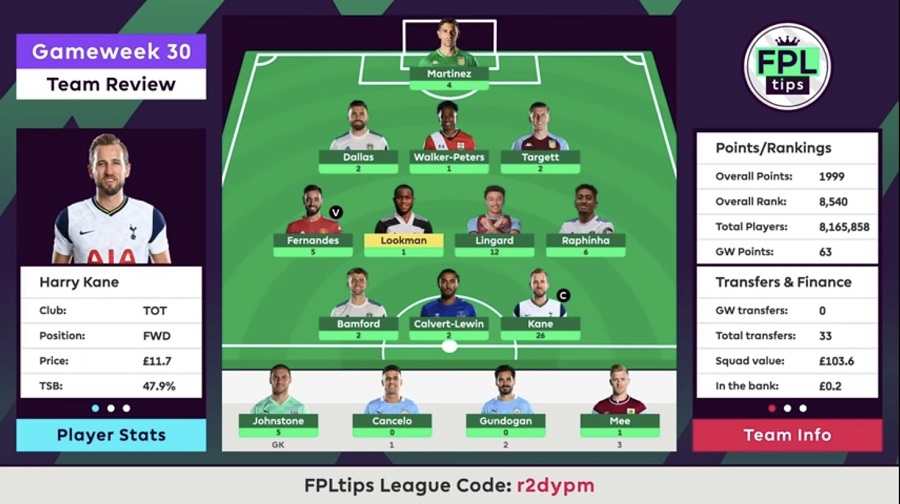 Gündogan’s absence saw Lookman come in but an injury at the start of the second-half ended his match early.

Jesse Lingard once again grabbed the headlines with a sensational solo goal and may have just done enough to secure his place in the wildcard team.

It was left to Harry Kane to do all the work upfront after Calvert-Lewin and Bamford missed 3 big chances between them.

No player took as many shots (7) as the England captain during the Gameweek.

The wildcard is active ahead of Friday’s Gameweek 31 deadline and here’s how the latest draft is shaping up:

Despite a rare off-day for Chelsea against West Brom, Edouard Mendy joins the cut-price Fraser Forster as the goalkeeper options.

Prior to that match, the Blues had kept 12 clean sheets in 14 matches in all competitions under Tuchel.

Aside from Man City in Gameweek 35, their end-of-season run is fairly encouraging, with Crystal Palace, Brighton, West Ham and Fulham making up their next 4 matches.

Alexander-Arnold lines up in defence after showing a return to form.

Over the last 5 Gameweeks, tallies of 14 attempted assists and 4 big chances created see the Liverpool right-back rank top amongst players in his position.

Luke Shaw is the only defender to earn more points in that time (37 to 33) and the England left-back has also made the team.

The remaining spots in defence aren’t as nailed-on but for now, Ruben Dias just edges Lucas Digne to a place.

There’s definitely a case to be made for dumping all Man City assets for fear of rotation but this guy just seems to keep on starting for club and country.

The appeal of Everton and Aston Villa assets is the fact they’ll definitely have a Double Gameweek to come and won’t blank.

For that reason, Matt Targett keeps his place – primarily as a bench option.

He’ll also provide cover in Blank Gameweek 33 against West Brom, when Spurs and City are without a fixture.

Conor Coady is definitely more of a ‘fixtures over form’ pick but Wolves face five of the bottom six in the next 5 Gameweeks.

He’s upped his goal threat over the last 6 Gameweeks, where no defender can better his 3 big chances.

Raheem Sterling is only in here as a placeholder.

The idea is that this will be a one-week punt, before buying Heung-Min Son ahead of his Double Gameweek 32.

At the time of recording, the Man City lineup against Dortmund hasn’t yet been released but the plan is to gamble on a midfielder who doesn’t start tonight – hopefully Mahrez or Sterling.

On current form and at his price, Diogo Jota picks himself but you’ll notice that Mo Salah has controversially been left out.

The main reason for that is team value; it’s proving difficult to stretch to four premium picks without destroying the bench – which will be needed in Blank Gameweek 33 and perhaps down the line.

As good as those Liverpool fixtures are, I don’t think you can leave out Fernandes or Kane and there’s a strong case for having Son from Gameweek 32. 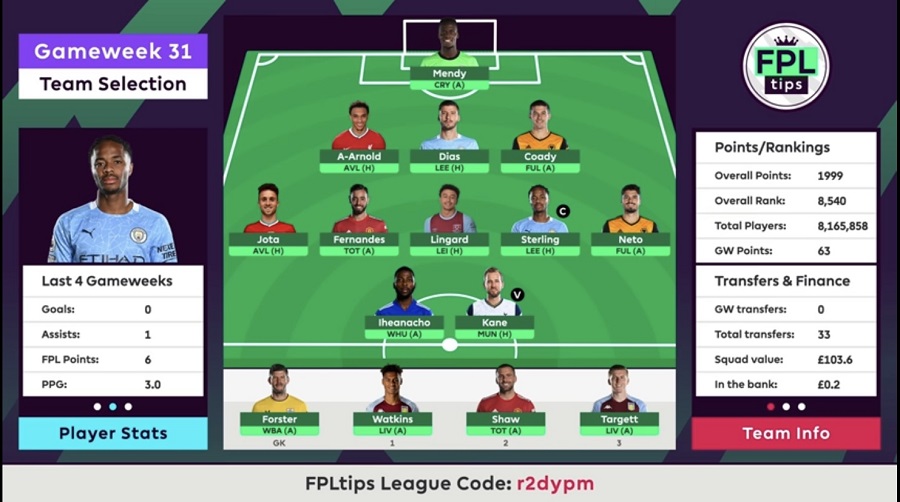 Also, looking ahead at captaincy options – assuming there’s a suitable Man City midfielder to gamble on this Gameweek – rotating between Fernandes and Kane for the remaining Gameweeks looks fine.

Up until last night, Mason Mount was heading towards a place in midfield but it’s difficult to part with the in-form Jesse Lingard.

He now has 6 goals and 4 assists in 8 matches since joining West Ham on-loan, averaging 8.5 points per game.

Since his first match for the club in Gameweek 22, only Bruno Fernandes can equal his 14 shots on target amongst midfielders and only Harry Kane (16) has landed more, across all positions.

With the fixtures toughening up for Leeds, Pedro Neto comes in as an alternative to Raphinha.

Wolves have only scored 9 goals in their last 9 matches but the 21-year-old has played a hand in four of those (1 goal, 3 assists).

He ranks 5th amongst midfielders in that time for both attempted assists (20) and big chances created (4).

Iheanacho has made five consecutive Premier League starts and has the form and fixtures to justify taking the gamble on him.

Over those last 5 Gameweeks, his tally of 7 big chances ranks 2nd amongst forwards, only trailing Harry Kane (8).

Only Richarlison (14) and Kane (15) have taken more shots in the box than the Leicester striker (10).

There’ll be around 2.0m in the bank when Heung-Min Son comes into the team – which could potentially be used to upgrade Iheanacho to Calvert-Lewin for Everton’s future Double Gameweek.

With the plan being to primarily use a 3-5-2 formation, Ollie Watkins comes in to provide strength on the bench.

As with Matt Targett, he’ll be handy in Blank Gameweek 33 and has a Double Gameweek to come.

It looks like a tough week for captaincy on paper, with Bruno Fernandes and Harry Kane facing each other in a fairly unpredictable match.

This could be one of the rare occasions where Mo Salah has the advantage in that regard.

However, that Man City fixture – at home to Leeds – is undeniably the juiciest of the Gameweek, it’s just a case of predicting who’ll start.

As mentioned earlier, the current plan is to gamble on either Mahrez or Sterling for a one-week punt, in place of Heung-Min Son – and that’s with the idea of giving that player the armband.

If both of those players were to start tonight, along with Gundogan and De Bruyne – as expected – then it may not be worth taking that gamble.

An alternative approach could be to begin with Heung-Min Son and instead bring Agüero in for Kane as a risky one-week punt.

By the time this video comes out, the Man City lineup against Dortmund will have been released – so you’ll have a better idea of who the one-week captain punt may be.

But as always, the ‘Final Team’ will go out on Twitter, Instagram and via the YouTube community tab – one hour prior to the deadline on Friday.

BEFORE YOU GO… Our official Daily Fantasy Sports Partner, FanTeam, are offering all NEW customers a FREE ENTRY to this week’s Gameweek 31 Fantasy Premier League contest, which has a £11,000+ guaranteed prize pool.

Simply register for your free account here, or by clicking the banner below and once you’ve signed up, you’ll automatically receive a FREE ENTRY to this weekend’s Gameweek 31 Weekly Monster, which has a guaranteed prize pool of £11,000+ – with around £1,500 going to the first place winner!

Using your 100M budget – just like FPL, pick your best 11-man squad (no subs) for Gameweek 31 only – imagine you are playing your Free Hit chip. The contest kicks off at 15:00PM GMT on Saturday the 10th of April and covers 9 Gameweek 31 matches only.