The FPLtips team will once again go under the microscope for this weeks Gameweek 4 Team Selection preview.

Before we look ahead, let’s first remind ourselves of how Gameweek 3 went, just before the international break.

Everton were one of only four teams to keep a clean sheet, beating Brighton 2-0, as Lucas Digne finally got some points on the board.

Only Man City (1) conceded fewer shots in the box than Everton (5) in GW3.

Luke Shaw as well kept his first shutout of the season, as Man Utd rode their luck against a Wolves side that created plenty.

It was Mason Greenwood who broke the deadlock late on in that match, maintaining his record of scoring in every game so far this season, while Mo Salah converted from the penalty spot in Liverpool’s 1-1 draw with Chelsea.

No midfielder took more shots in the box than Greenwood (3) in GW3.

Giving Michail Antonio the captain’s armband proved wise after he earned double-figures for a third successive Gameweek, playing a direct hand in both of his side’s goals in a 2-2 draw with Crystal Palace.

No player took more shots than Antonio (5) during the Gameweek.

Aston Villa went behind to an early Ivan Toney goal, before Danny Ings laid off Emi Buendia for the equaliser.

No player in the match took as many touches in opp. box as Ings (6).

So, let’s move on to the transfer plans ahead of Saturday’s Gameweek 4 deadline:

There are two free transfers available and the intention is to use them both. As with most of us when it comes to playing Fantasy Premier League, it’s good to take the occasional gamble and have fun – similar to playing on Foxbonus – but like all punts and gambles, the outcome is unknown but will certainly make your weekend much more entertaining.

The arrival of Cristiano Ronaldo could see Bruno Fernandes suffer as a fantasy asset, being likely to lose penalty duties and no longer be afforded a free rein to shoot at every opportunity.

No player scored as many penalties as Fernandes (9) last season, with half of his 18 league goals coming from the spot.

United have been amongst the top three teams for penalties awarded in each of the last three seasons, earning a total of 37 in that time.

Just one Gameweek on from selling Diogo Jota, the ‘Out of Position’ midfielder is immediately back on the radar after an injury to Roberto Firmino.

Jota ranks top amongst teammates for big chances this season – with 3, while his 0.49 non-penalty expected goals (xG) figure, per 90 minutes, is better than both Salah (0.24) and Mane (0.43) have produced. 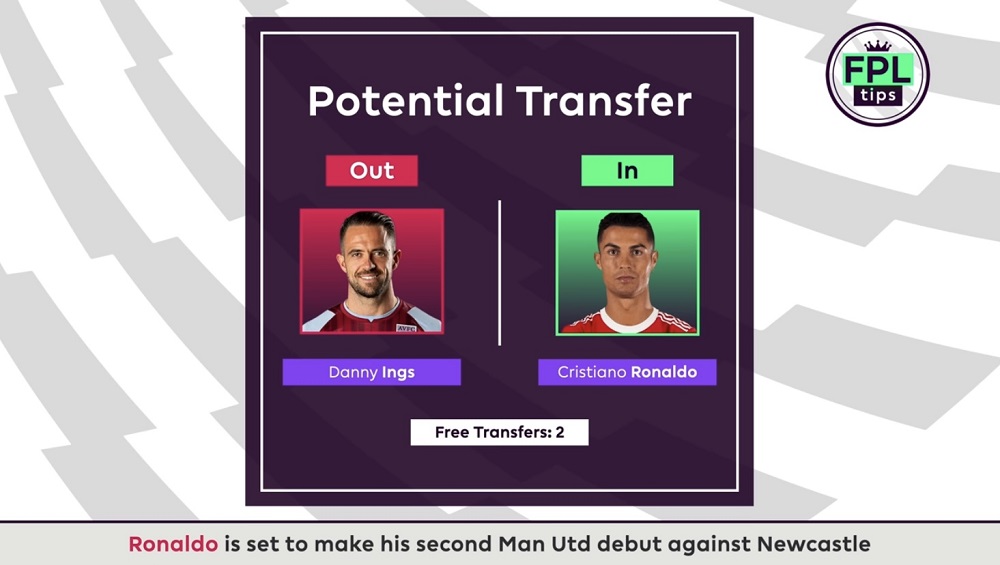 However, there still hasn’t been a definitive update on Firmino’s injury, so I’ll be holding off from making the transfer until further news.

If he looks set for a quicker return to action, Raphinha and Ferran Torres will be the alternative options to bring in.

With Aston Villa set for a tougher spell of fixtures, the plan was always to sell Danny Ings ahead of Gameweek 4, with Dominic Calvert-Lewin the initial target to replace him.

That’s all changed now following the arrival of Cristiano Ronaldo, who looks set to make his second United debut this weekend after an early return from international duty.

Ronaldo landed in Manchester last Thursday, giving him nine days to prepare for Newcastle’s visit to Old Trafford on Saturday.

So, with all that mind, here’s how the team is set to line up for Gameweek 4:

Their Gameweek 4 opponents Brentford have landed 8 shots on target so far; only Norwich, Arsenal (each 7) and Crystal Palace (5) have managed fewer.

Brighton have faced 9 shots on target in the first 3 Gameweeks.

There are some good fixtures across the back four once again, with Alexander-Arnold facing Leeds.

His tally of 15 attempted assists this season is five clear of any other player – across all positions – while no defender has created as many as his 3 big chances.

Alexander-Arnold ranks top amongst all players for attempted assists (15).

Despite conceding 5 goals this season, West Ham have restricted opponents to just 6 efforts on target, with only Man City (1) faring better.

But rather worryingly, Southampton rank amongst the top five teams for expected goals (5.09).

Coufal ranks 3rd amongst defenders for xA this season (0.83).

Despite racking up 7 big chances, Burnley have scored just twice; only Norwich (1), Arsenal and Wolves (0) have fared worse.

Man Utd have faced just 16 shots inside the box this season, with only Man City (7) restricting opponents to fewer.

They face a Newcastle side that rank joint-12th for big chances – with 4 – and joint-16th for shots on target – with 8.

Said Benrahma ranks joint-5th for big chances (2) amongst midfielders, while only Trincao, Mane (each 5) and Salah (6) can better his 4 shots on target.

He trails Diogo Jota for big chances – 2 to 3 – with only Ferran Torres, Raheem Sterling and Conor Gallagher able to match the Portuguese international’s tally from midfield. 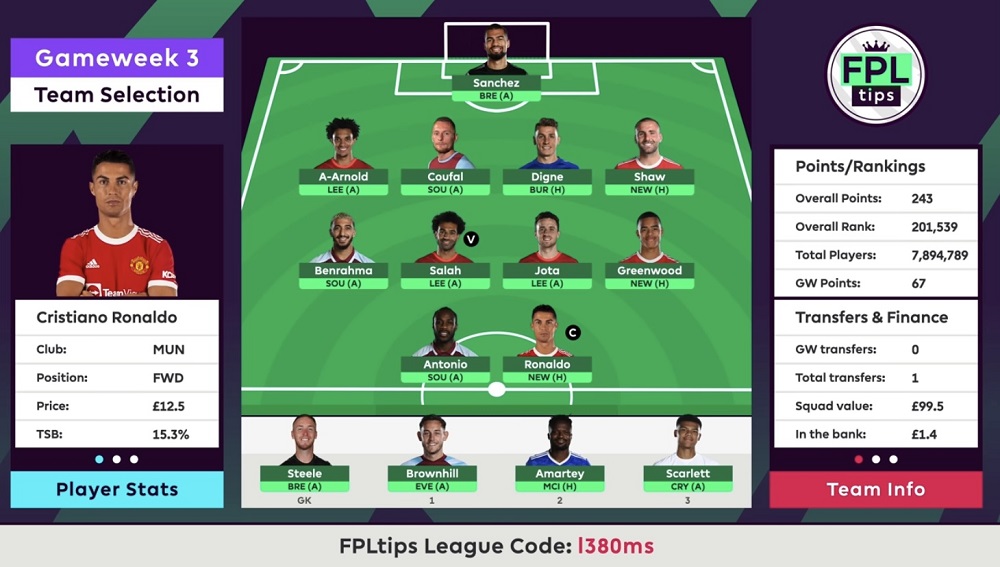 No midfielder has taken as many shots as Salah (13) this season.

Mason Greenwood has scored in every Gameweek so far this season, netting United’s only goals in each of the last two.

His tally of 7 shots inside the box trails only Salah and Mane (each 11) amongst midfielders, while no teammate has taken as many as his 11 shots in total.

No teammate has taken as many shots as Greenwood this season (11).

Michail Antonio has been the stand-out player so far, producing the most FPL points (40) and recording the most shots (16), big chances (6) and expected goals (3.21).

Cristiano Ronaldo netted twice in the first of Portugal’s games over the break, after being denied from the penalty spot.

He was booked for the removal of his shirt in celebration of his second goal, allowing for an early return to Manchester to prepare for this weekend’s match.

No team have a worst xG conceded figure than Newcastle (8.45).

On paper, Mohamed Salah is a very strong contender for captaincy but it’s difficult not to get swept up in the hype surrounding the return of Cristiano Ronaldo.

Just two teams have conceded more goals so far this season (8) and the Magpies have recorded the highest expected goals conceded figure (8.45).

Only Arsenal (14) have allowed opponents more than their 11 big chances.

So, assuming Ronaldo looks set to feature from the start this weekend, he’ll be taking the armband.