There were plenty of points at the back thanks to a double Southampton clean sheet and a long overdue double-figure return from Justin.

The Leicester fullback ranked top amongst defenders in Gameweek 12 with tallies of 4 attempted assists and 20 successful final third passes.

But the 50-50 call to play Ayling ahead of Targett proved costly and prevented the full house of clean sheets.

It was somewhat predictably Salah and Son who got the returns in midfield, though both Liverpool and Spurs dropped points with draws against Fulham and Crystal Palace, respectively.

The Egyptian was heading for a blank until fortuitously converting a late penalty, moments before he was due to be subbed off.

Grealish was his usual lively self against Wolves, firing 4 shots and attempting 3 assists but it was disappointing to see him shy away from taking their late penalty.

Dean Smith confirmed after the game that his captain would have stepped up had Anwar El Ghazi not been on the pitch.

All three of the forwards were amongst the points as Calvert-Lewin and Bamford each won penalties.

Vardy was at the heart of Leicester’s 3-0 win over Brighton, amassing a goal and 2 assists. 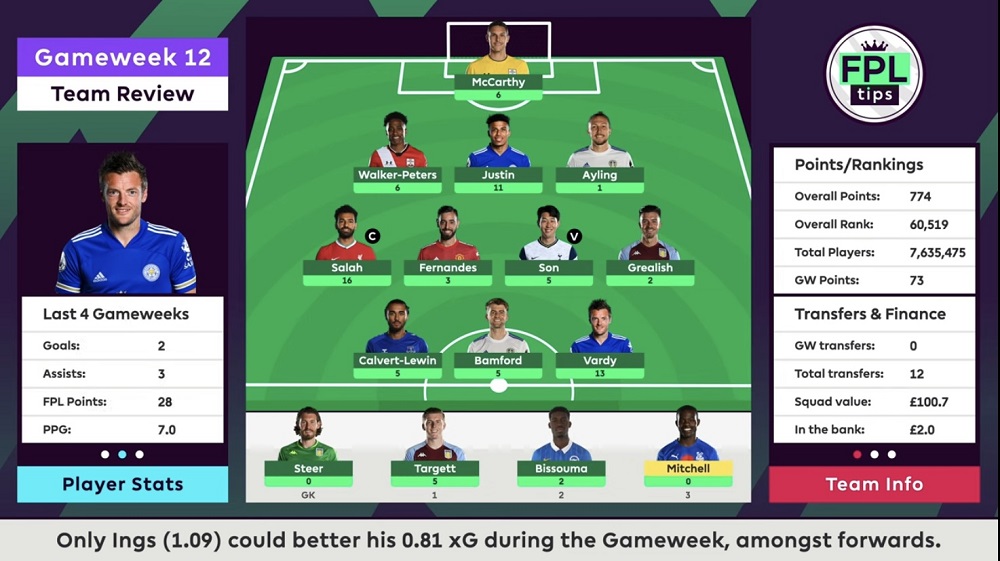 Only Ings (1.09) could better his 0.81 expected goals figure (xG) during the Gameweek, amongst forwards.

So, let’s move on to the transfer plans ahead of Tuesday’s Gameweek 13 deadline:

Similar to a couple of weeks ago, the plan is to bring Kevin De Bruyne in for a favourable home fixture and give him the armband.

The Belgian has averaged 7.3 points across the last 4 Gameweeks, with a goal and 3 assists.

He’s up against a West Brom side that have conceded 8 goals over the same period; the most in the league.

There are two possible routes to the Man City midfielder; one involves selling Vardy for a hit to move to five in midfield. 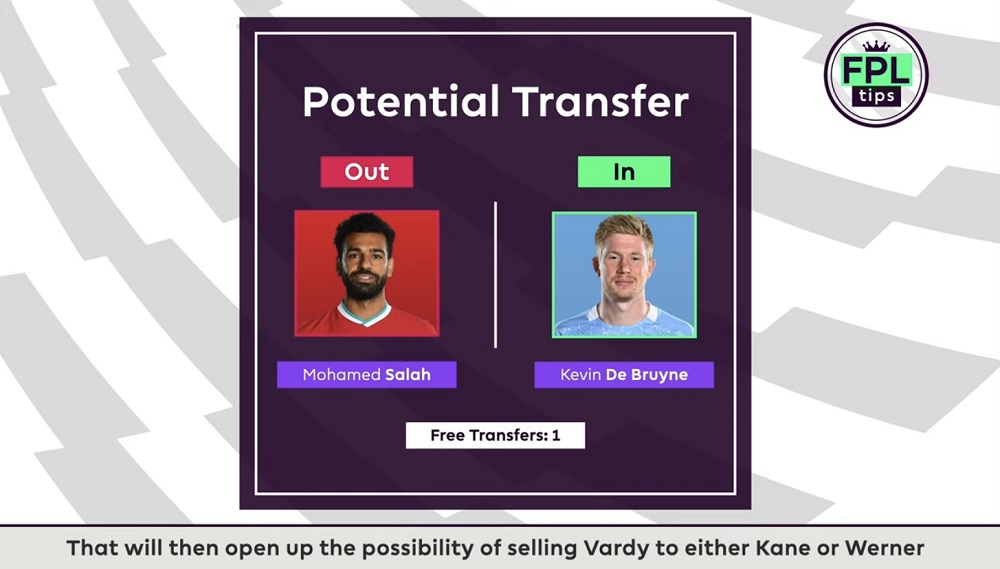 But the far more simple move would be to leave the structure as it is, avoid the hit, and make the straight swap from Salah.

That will then open up the possibility of selling Vardy to either Kane or Werner next Gameweek, before bringing the Egyptian back in for Gameweek 15.

Here’s how the team is set to line-up for the midweek matches:

McCarthy faces an Arsenal side that suffered a 1-0 defeat to Burnley on Sunday.

The Gunners have now scored a league-low total of just 2 goals over the last 8 Gameweeks.

They’ve fashioned 10 big chances in that time, with only Newcastle (8) and West Brom (4) faring worse.

With numbers like that, it’s tempting to field Walker-Peters for the double-up but it’s also hard to leave out Justin after his recent attacking displays.

Ayling is up against a Newcastle side that rank joint-bottom with West Brom for big chances (3) in the last 4 Gameweeks, while Targett faces Burnley.

The Clarets have scored 3 goals in the last 4 Gameweeks and only Arsenal and Sheff Utd (each 1) have managed fewer.

No player in the league has earned more points than Bruno Fernandes (47) in the last 5 Gameweeks, where he’s amassed 4 goals and 3 assists.

He’s up against a Sheffield Utd side that have shipped a league-high total of 11 goals over the same period, while only Leeds (16) have conceded more than their 14 big chances.

Son faces Liverpool in a ‘top of the table’ clash, having earned 2 goals and 2 assists in the last 4 Gameweeks.

The Reds have conceded 6 goals in 6 games at Anfield this season, keeping 2 clean sheets.

Mourinho’s Spurs have taken a defence-first approach in recent meetings with ‘big six’ teams, so this could be a game of fine margins.

Grealish has taken 8 shots over the last 4 Gameweeks and only 6 midfielders can better his total of 10 attempted assists.

Burnley have shipped 12 goals in 6 away matches this season, with only West Brom and Sheffield Utd (each 13) faring worse.

Calvert-Lewin will remain in the team at least until using the wildcard ahead of Gameweek 16, with meetings against out-of-form Arsenal and Sheffield Utd still to come.

Leicester may prove to be a much sterner test, however; they’ve shipped just 3 goals in their last 4 home matches, keeping 2 clean sheets.

Vardy comes into that clash with a little more optimism; no forward has earned more points (26) in the last 3 Gameweeks. 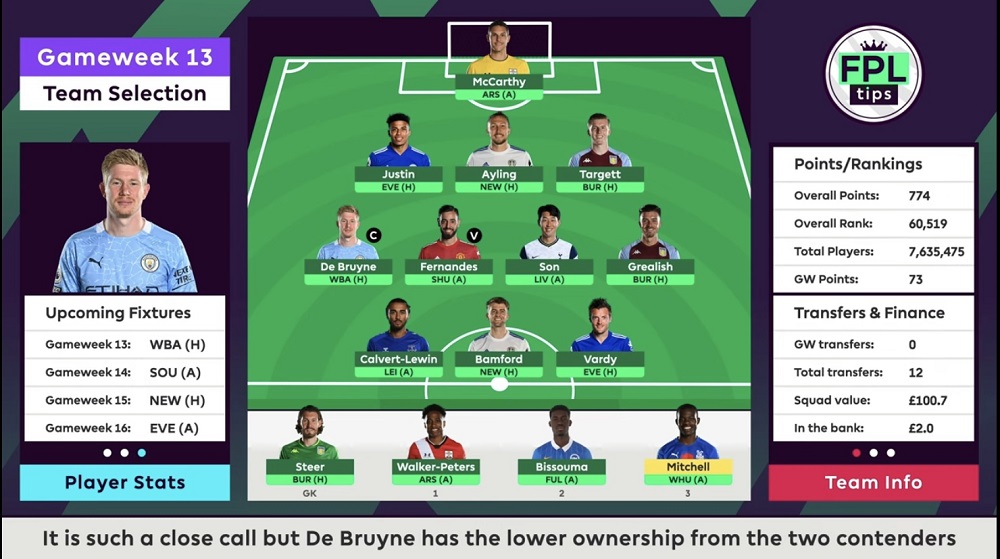 The Toffees have allowed 7 goals in their last 4 on the road, with only Southampton (8) and Sheffield Utd (10) faring worse.

No forward has taken more shots (17) than Bamford over the last 4 Gameweeks and only Calvert-Lewin and Wood (each 5) have had more big chances than his 4.

While the intention has, for a while, been to bring De Bruyne in to captain for this fixture, Bruno Fernandes should also be considered for the armband.

Sheffield Utd remain bottom of the table and have lost 7 successive matches.

But over the last 4 Gameweeks, West Brom have conceded 8 goals to the Blades’ 7 and have allowed 11 big chances to their 10.

It is such a close call but De Bruyne has the lower ownership from the two contenders and therefore offers more potential for climbing rank.

BEFORE YOU GO… Our official Daily Fantasy Sports Partner, FanTeam, are offering all NEW customers FREE ENTRY to this week’s Gameweek 13 Fantasy Premier League contest, which has a €10,000 guaranteed prize pool.

Simply register for your free account here, or by clicking the banner below and once you’ve signed up, you’ll automatically receive a FREE ENTRY to this weekend’s Gameweek 13 Weekly Monster, which has a guaranteed prize pool of €10,000 – with €1,000 going to the first place winner! 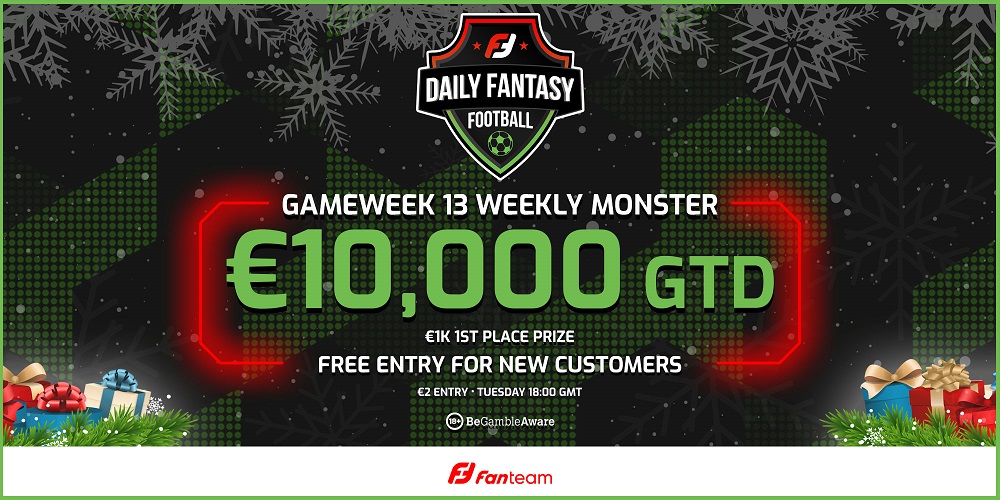