Despite a rough start to the Gameweek after Mo Salah’s antics off the bench, 88 points saw a rise up to 33,004.

Southampton limited Man City to just the one goal, while Justin earned a surprise clean sheet away at Spurs.

The 22-year-old saw an assist ruled out by VAR when James Maddison was deemed to be narrowly offside.

Targett helped Aston Villa to a comfortable clean sheet against West Brom, where the Baggies managed just 1 attempt at goal all game.

It was a rare day-off for Kane and Son against Leicester; the South Korean missed a big chance from a corner after Alderweireld’s flick-on found him at the back post.

De Bruyne picked out Sterling for the only goal against Southampton, while Grealish earned two late FPL assists against West Brom. 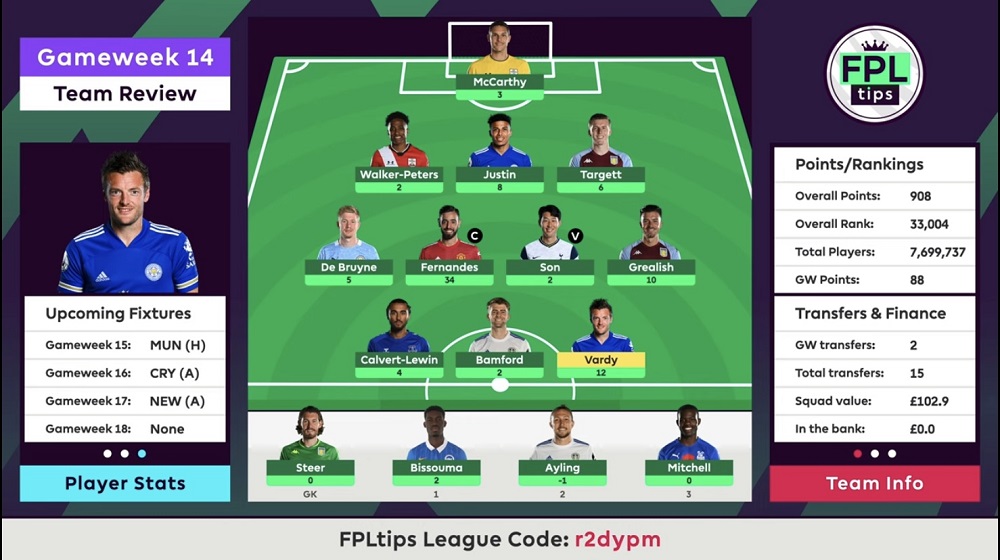 No player produced as many as his 8 attempted assists during the Gameweek.

But captain Bruno Fernandes was the main headline, with 2 goals and an assist earning him a 17-point haul.

Calvert-Lewin forced an own goal with his header, while Bamford squandered his 3 shots in the box in the 8-goal thriller at Old Trafford.

Some heroics were needed from Vardy after giving him one more week at the expense of Mo Salah and the Leicester talisman didn’t disappoint.

No player took as many as his 6 shots in the box during the Gameweek.

Let’s move on to the transfer plans ahead of Saturday’s Gameweek 15 deadline:

It’s worth noting that the wildcard has to be played next Gameweek at the latest, ahead of Gameweek 16, so there were 2 free transfers to be used for Gameweek 15.

Both have already been confirmed, as per last week’s plans.

Vardy leaves on a high after averaging 8.0 points per game in the last 5 Gameweeks and Brewster comes in as a downgrade that will see a switch to a 3-5-2 formation. 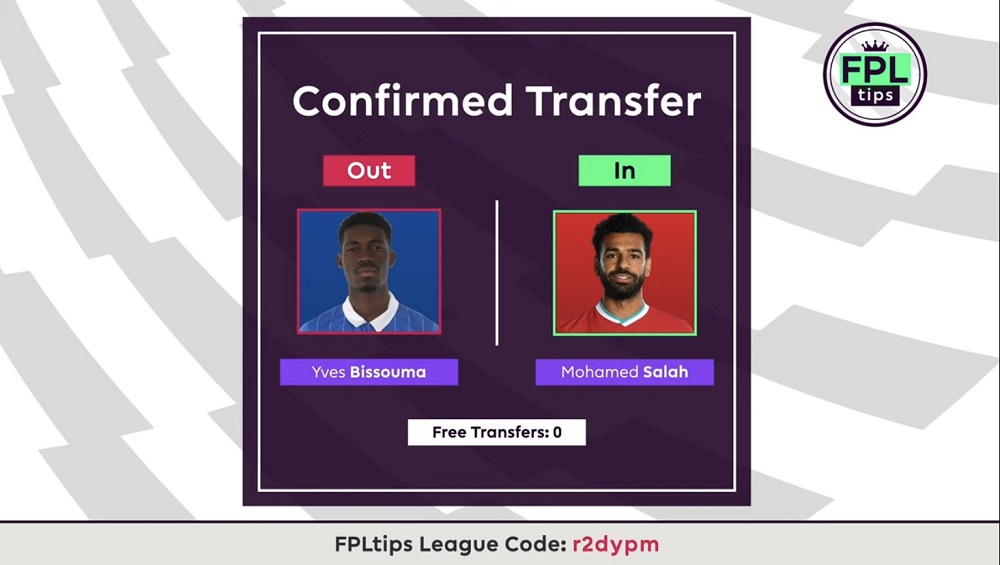 The second free transfer sees the return of Mo Salah, who replaces Bissouma.

The decision to back De Bruyne over the Egyptian for the last 2 Gameweeks goes down as a failure and he’s back in place for West Brom’s visit to Anfield.

Here’s how the team is set to line-up for this weekend:

It’s a good fixture for McCarthy and Walker-Peters on paper but Southampton will be without the services of the suspended Oriol Romeu in midfield.

Although Fulham have shown signs of form in recent matches, they’ve managed just 2 goals in the last 4 Gameweeks; ranking joint-bottom with Brighton and Arsenal.

The decision to back Ayling over Dallas at the start of the season has been a bit of a disaster but thankfully, there’s only one more week until that switch can be made on the wildcard.

Leeds have struggled with defending set pieces this season and that’s something that Burnley will look to exploit.

Targett faces a Crystal Palace side that have failed to score in 3 of the last 6 Gameweeks.

Aston Villa have earned 4 clean sheets in that time and only Liverpool and Man City (each 3) have shipped fewer goals than their 4.

Salah joins what now looks to be a powerful midfield five, having amassed 5 goals and 2 assists in the last 4 Gameweeks. 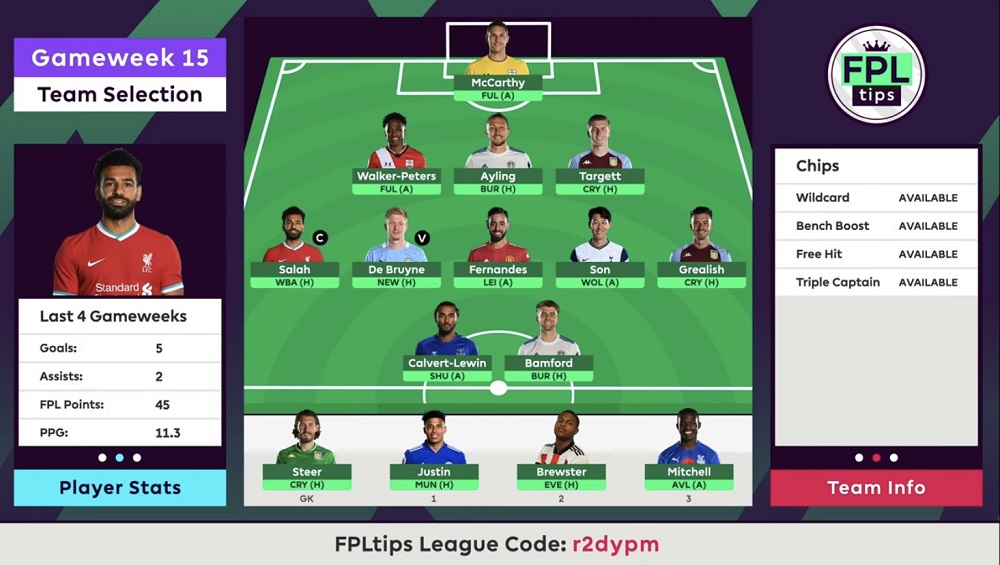 The Belgian has created a league-best total of 5 big chances in that time, while only Grealish (17) can better his 14 attempted assists.

After the heavy defeat to Liverpool, Crystal Palace have now shipped 10 in the last 4 Gameweeks; only West Brom (11) and Leeds (13) have conceded more.

The Everton forward has earned 3 FPL assists in the last 4 Gameweeks, with only Martial (4) providing more.

Sheffield United have allowed opponents 14 big chances over the same timeframe, with only Leeds (19) faring worse.

Bamford has scored twice in the last 4 Gameweeks and only Benteke (8) can better his 7 shots on target, amongst forwards.

Despite conceding just 2 goals in that time, Burnley have given up 9 big chances; only 5 teams have allowed more.

After the feast at Crystal Palace, Liverpool have now scored a league-high 14 goals in the last 4 Gameweeks.

They’re up against a West Brom side that rank 19th for goals conceded in that time – with 11.

So, it looks to be a fairly straight-forward decision to give the captain’s armband to the in-form Mo Salah this weekend.

BEFORE YOU GO… Our official Daily Fantasy Sports Partner, FanTeam, are offering all NEW customers FREE ENTRY to this week’s Gameweek 15 Fantasy Premier League contest, which has a €15,000 guaranteed prize pool.

Simply register for your free account here, or by clicking the banner below and once you’ve signed up, you’ll automatically receive a FREE ENTRY to this weekend’s Gameweek 15 Weekly Monster, which has a guaranteed prize pool of €15,000 – with €3,000 going to the first place winner! 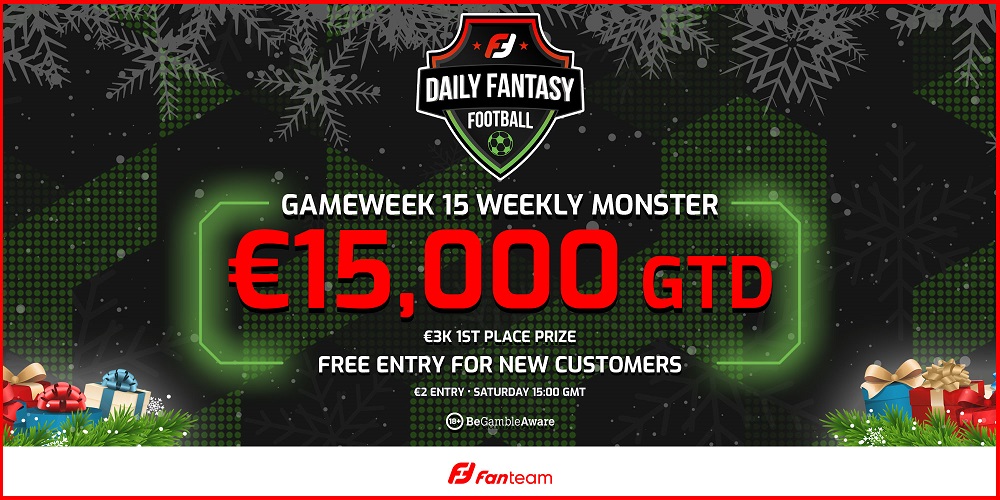